You, a Canadian, pimping for Empires mouthpeice? :lol:

I wouldn't move to cuba but i wouldnt move to Vancouver either, the cuba I seen had healthy people who had food to eat, schools, literacy, universal HC yeah the buildings were crumbling due to embargo but there wasn't garbage everywhere like SE asia.

Look at the rest of south/central America and guess what cuba might have been, certainly a great place to run a drug business from, so you would have gangs like Mexico,

At the time the cold war was on Castro made a deal with one devil to keep the other devil out and the embargo resulted, if the USA had relaxed the embargo Castros power would have fizzled

lol - maybe the tourists at the all-inclusive resorts.

A chicken a month isn't exactly getting good food.

There is paladares all over the place with Cubans eating there. The menu is pretty boring but it appeared that they had enough food to run these non state run eateries.
I have been all over the Island and didn't see any poverty like I have in Central America, Mexico, the DR.
The people appeared to be overly happy, educated, looked after somewhat. More so than their neighbours.

I wouldn't go back, It was cool to see Havana, where we stayed. Wasn't over the moon about the place. I expected this super depressed nation, due to a lifetime of American media info we have been fed, was quite the opposite.

HS cultural junkets by Canadian school to Cuba are quite popular, the Band teacher likes to stock up on cigars so they go every 3 yrs

which is the western end of Cuba, Havana was cool but now I would go other places in Cuba 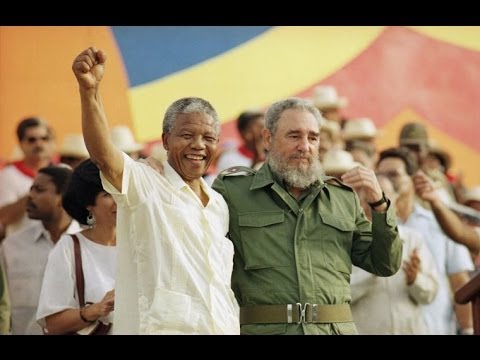 We have come here today recognizing our great debt to the Cuban people. What other country has such a history of selfless behavior as Cuba has shown for the people of Africa? How many countries benefit from Cuban health care professionals and educators? How many of these volunteers are now in Africa? What country has ever needed help from Cuba and has not received it? How many countries threatened by imperialism or fighting for their freedom have been able to count on the support of Cuba?

I was still in prison when I first heard of the massive help which the Cuban international forces were giving to the people of Angola. The help was of such a scale that it was difficult for us to believe it, when the Angolans were under attack by the combined forces of South Africa, the FALA [Armed Forces for the Liberation of Angola] who were financed by the CIA, mercenaries, UNITA [National Union for the Total Independence of Angola], and Zaire in 1975.

In Africa we are used to being victims of countries that want to take from us our territory or overthrow our sovereignty. In African history there is not another instance where another people has stood up for one of ours. We also acknowledge that the action was carried out by the masses in Cuba and that those who fought and died in Angola are only a small portion of those who volunteered to go. To the Cuban people internationalism is not only a word but something which they have put into practice for the benefit of large sectors of mankind. We know that the Cuban forces were ready to retreat after driving back the invasion in 1975 but the continued aggressions of Pretoria did not allow them to do so. Your presence there and the reinforcements sent for the battle of Cuito Cuanavale has a historical meaning. The decisive defeat of the racist army in Cuito Cuanavale was a victory for all Africa. This victory in Cuito Cuanavale is what made it possible for Angola to enjoy peace and establish its own sovereignty. The defeat of the racist army made it possible for the people of Namibia to achieve their independence.

It is well known that the response of the state to our legitimate democratic demands was, among others, to accuse our directors of treason and subject our people during the 1970s to indiscriminate massacres. These facts, and the banning of our organization, left us no other road than the one followed by any self-respecting people, including Cuba, that is, to rise up in an armed struggle to retake our country from the hands of the racists.

I should mention that when we wanted to take up arms, we approached numerous Western governments in search of help and we could only talk with the lowest level officials. When we visited Cuba we were received by the highest authorities who immediately offered anything we wanted and needed.

That was our first experience with Cuban internationalism. Even though we took up arms, it was not our preferred option. It was the apartheid regime that forced us to take up arms. Our preferred option has always been to find a peaceful solution to the apartheid conflict. The combined struggle of our people in the country, as well as the growing international battle against apartheid during the 1980s made possible a negotiated solution to that conflict. The decisive defeat in Cuito Cuanavale changed the status of forces in the region and reduced considerably the capacity of the Pretoria regime to destabilize its neighbors within the country

It is in this context that we value our friendship with Cuba very, very much. When you, Comrade Fidel, yesterday said that our cause is your cause, I know that that sentiment came from the bottom of your heart and that that is the feeling of all of the people of revolutionary Cuba.

Color-blind, passionately internationalist, resentful of all forms of racism and imperialism, Cuba gave itself fully to Latin America and to the world. She did not do it as some sort of sacrifice, but as a revolutionary obligation. She did it with simplicity and humanism, asking for absolutely nothing in return. To quote the closest comrade of Fidel Castro, Ernesto [HTML_REMOVED]#8220;Che[HTML_REMOVED]#8221; Guevara:

The Chinese people have lost a good and true comrade…made immortal historic contributions to the world socialist development…Comrade Castro will live forever.

For all Vietnamese, Fidel was a great friend, a comrade and a very close brother

To all the revolutionaries of the world, we have to continue his legacy and his flag of independence, of socialism, of homeland

Fidel Castro was a sincere and reliable friend of Russia. He embodied the high ideals of a politician, a citizen and a patriot sincerely, convinced of the rightness of the cause to which he dedicated his whole life. His memory will forever remain in the hearts of the citizens of Russia

Today, the world marks the passing of a brutal dictator who oppressed his own people for nearly six decades. Fidel Castro[HTML_REMOVED]#8217;s legacy is one of firing squads, theft, unimaginable suffering, poverty and the denial of fundamental human rights [HTML_REMOVED]#8230; I join the many Cuban Americans who supported me so greatly in the presidential campaign, including the Brigade 2506 Veterans Association that endorsed me, with the hope of one day soon seeing a free Cuba

'merica. :rolleyes: Once again on the wrong side of history.

When Hugo Chavez was standing in the rain, bald after chemotherapy, clenching his fist in heroic defiance, and shouting at the enemies of the revolution [HTML_REMOVED]#8220;Here no one surrenders![HTML_REMOVED]#8221; it was clear and obvious where his inspiration had come from: Cuba, and from his mentor Fidel.

Castro is pretty divisive, but he was both a thug and a savior depending on who you were, so I don't see how what Trudeau said or what Trump said as all that controversial. Harper praised King Abdulla when he died and not many people lost their shit over it. Politics make strange bedfellows, and Trudeau's family know him very well.

Yup at band Camp there was one lonely looking prostitute out on the malecon, no drugs no garbage, and actualy there were a bunch of Cubans in our all enclusive

I think there was a lot of oil money involved in sayin the nice shit about King Abdulla?

Any time USA declares "war" on something drugs/terroism/anything that is the sign of a sure loser idea, I think if they had quit embargoing Cuba Fidel would have become un necessary, maybe open elections would have been more likely ?

Haha, this is funny.

Lots of Albertans/BCers I know are talking to me aboot Trudeau being the illegitimate love spawn of Castro. A lot of the same people that are vocal aboot having Western Canada leave the east behind, and form a new country.

Why are people trying to move to Canada, the US, the UK, Germany, Australia, etc….

Why are there no hoards of people heading for Cuba, North Korea, China (except from North Korea), Russia, Zimbabwe, etc…

Immigrants know where freedom, opportunity and a good life are, and Cuba is not on the list.

Which^^ makes 631 failed attempts by the CIA

That attempt at being funny is a complete failure.