Good trails. What the hell are good trails? This is the consummate question for mountain bikers. Particularly when beer is involved. Your favourite trail might be hated by most – and even by your riding buddies. Some trails are as popular as toast, but as Justin Bieber continues to prove, the most popular thing is rarely the best thing. 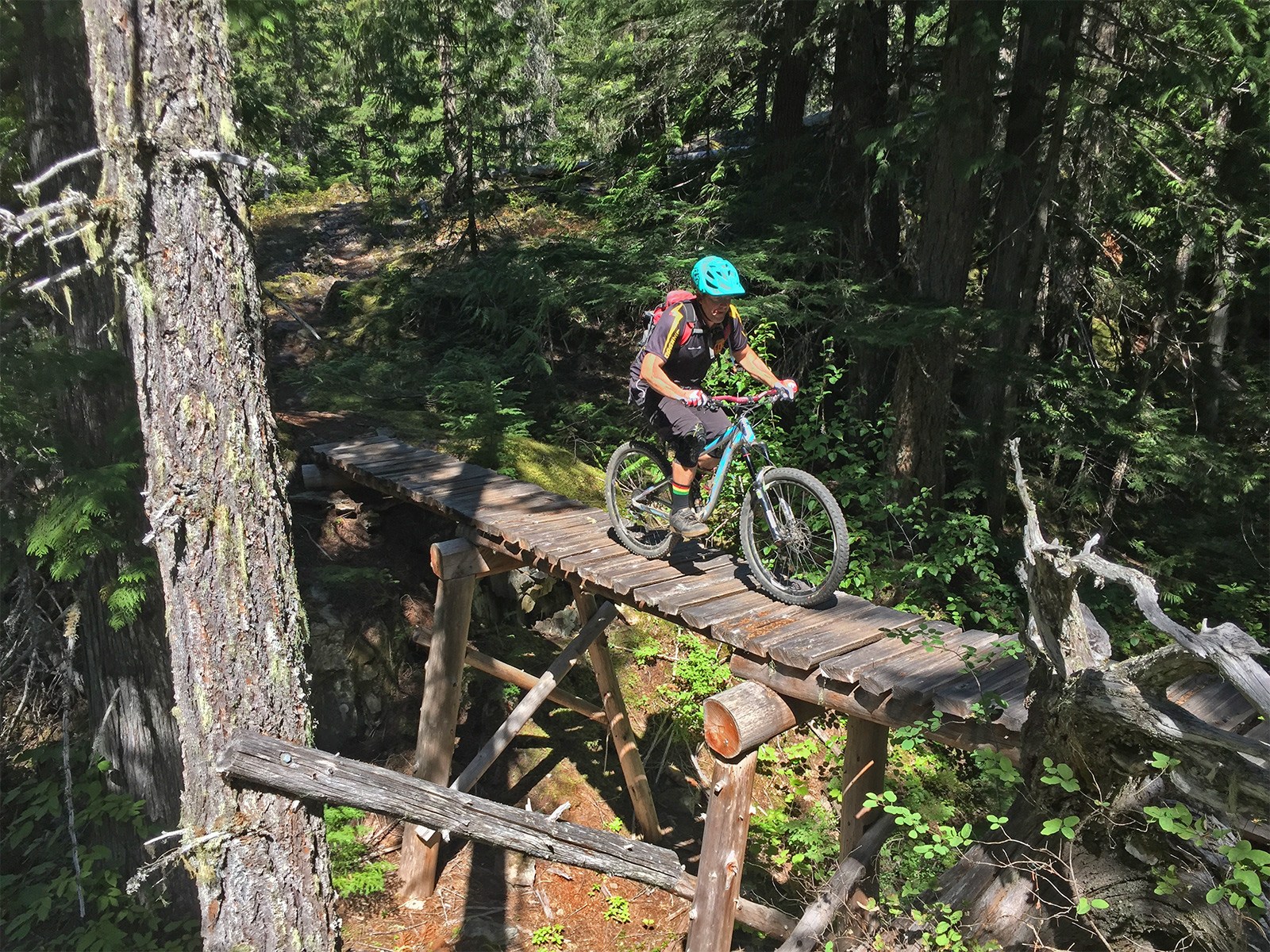 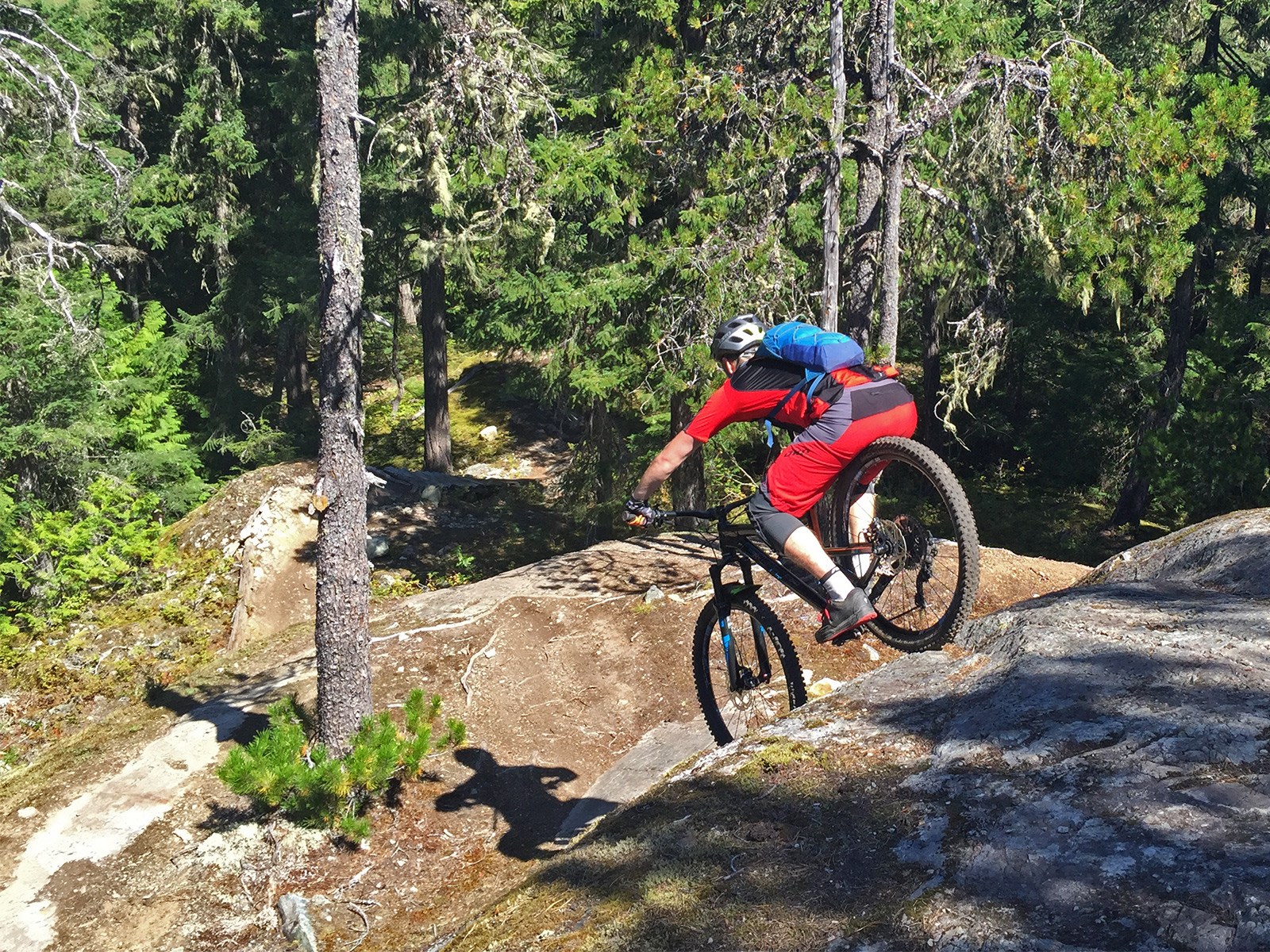 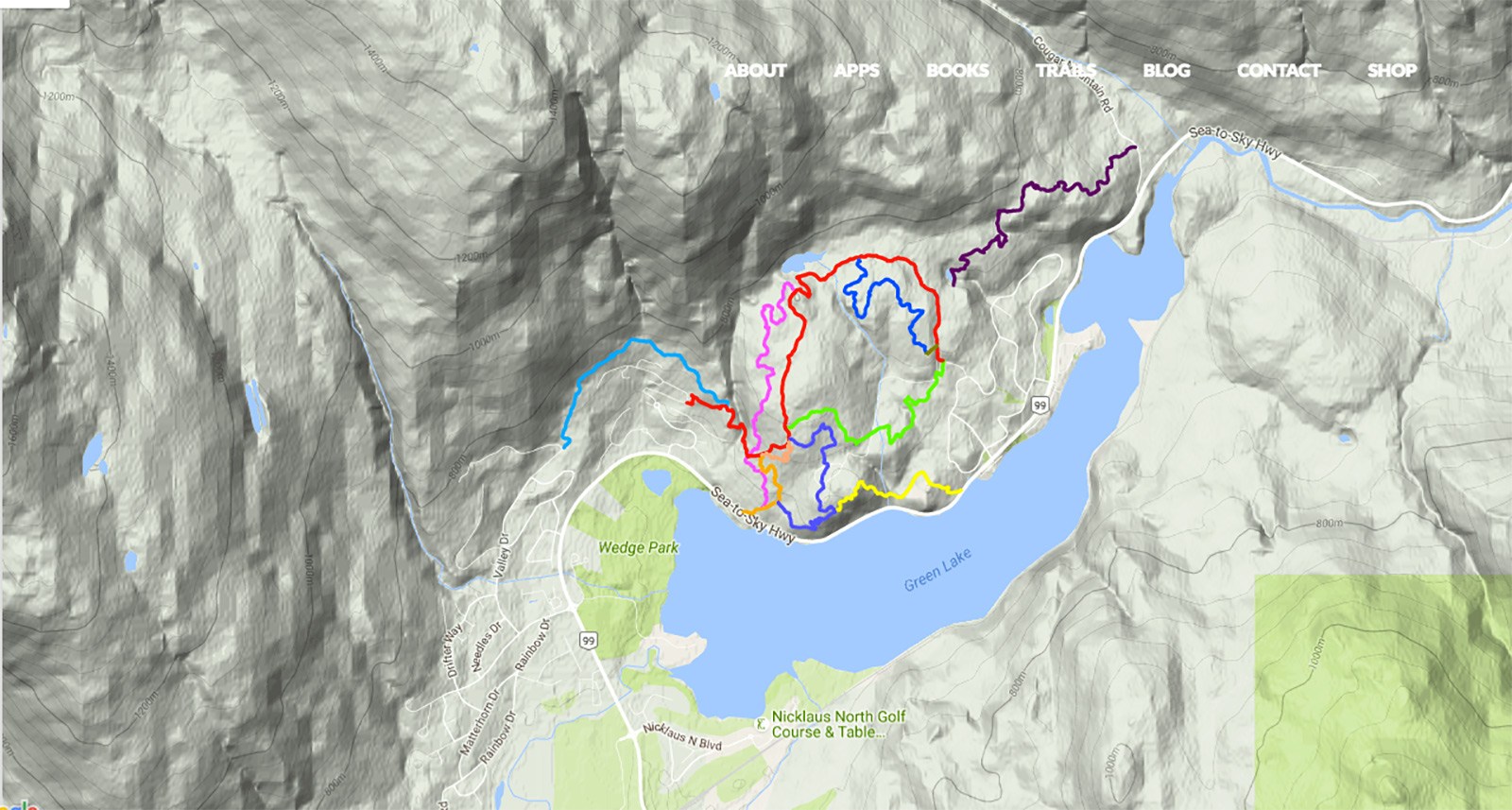 This is the No Flow Zone. Map courtesy bikepirate.com

I did my first NFZ loop with my friend Pedro Chambré at the beginning of Crankworx. We picked our way through and both got flats. It had its moments, and there are some fun and satisfying slab moves, but I didn’t love it. 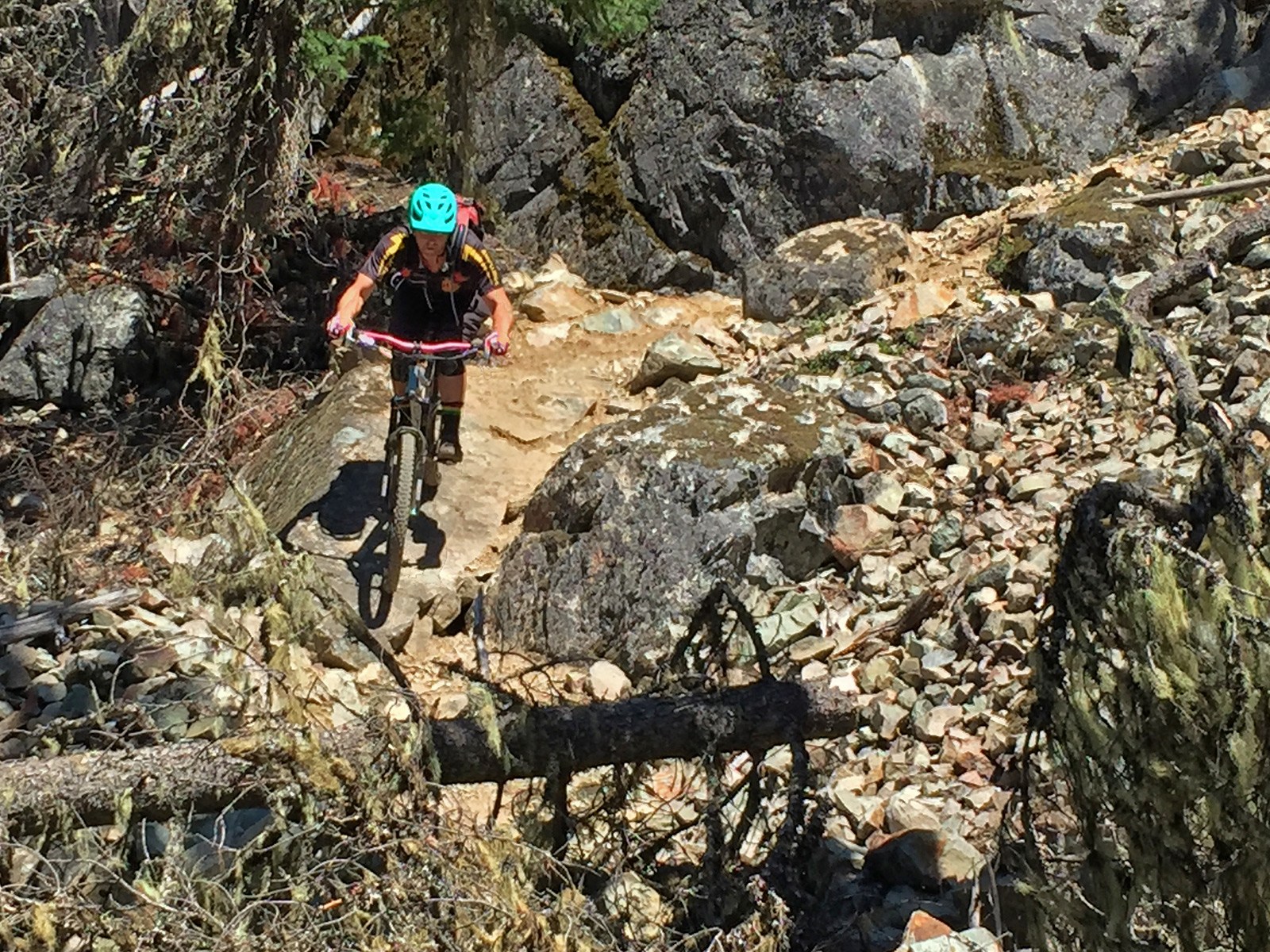 Roots seem to be placed so front and rear wheels strike them simultaneously, or consecutively if that’s worse for the move at hand. The rocks are angry and sharp and plentiful and much of the line is spiked with short choppy climbs. The plentiful slabs are the only smooth sections – and even some of those are rough. To ice the cake I made some rookie errors and ended up walking back to the cabin with my flat. And I rarely get flats.

The granite-clad landscape is sparsely shaded with gnarled pines and much of the rock is carpeted with moss. The beauty of the area numbs the sting of moves missed and shins smacked. It wasn’t the sort of fun you thought you’d left in childhood, the way mountain biking can be, but for me it still beat all but the most perfect road ride. 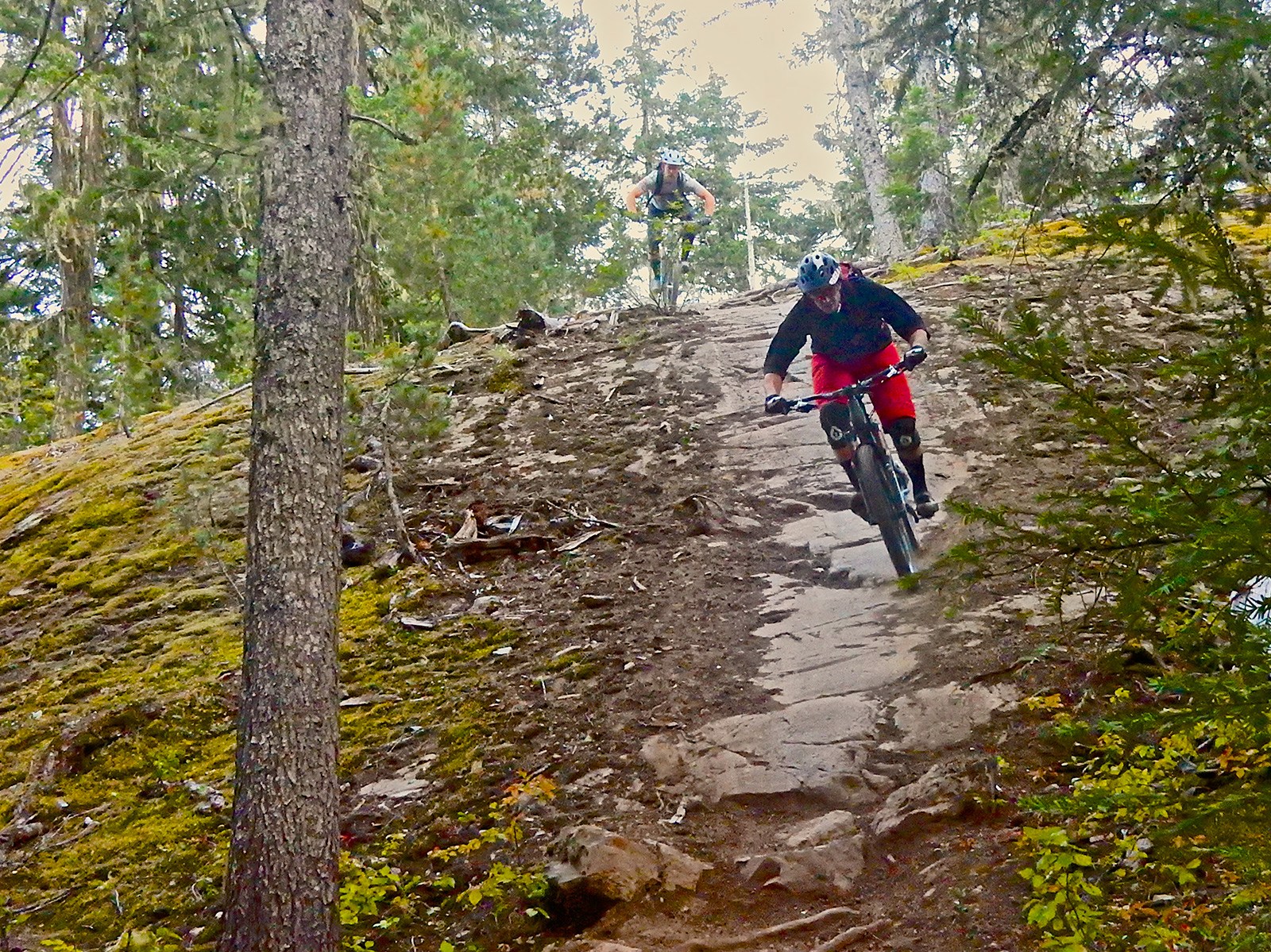 Pete Roggeman following Tim Coleman as the light fades in the NFZ. The rock faces may give you the wrong idea, but nobody takes photos of uphill off-camber rooty corners.

For the rest of the week of Crankworx I rode a little bike park, some of our favourite lines in the Valley – like Crazy Train – and then I talked Tim and Pete into joining me for some no flow on the Saturday before Slopestyle. 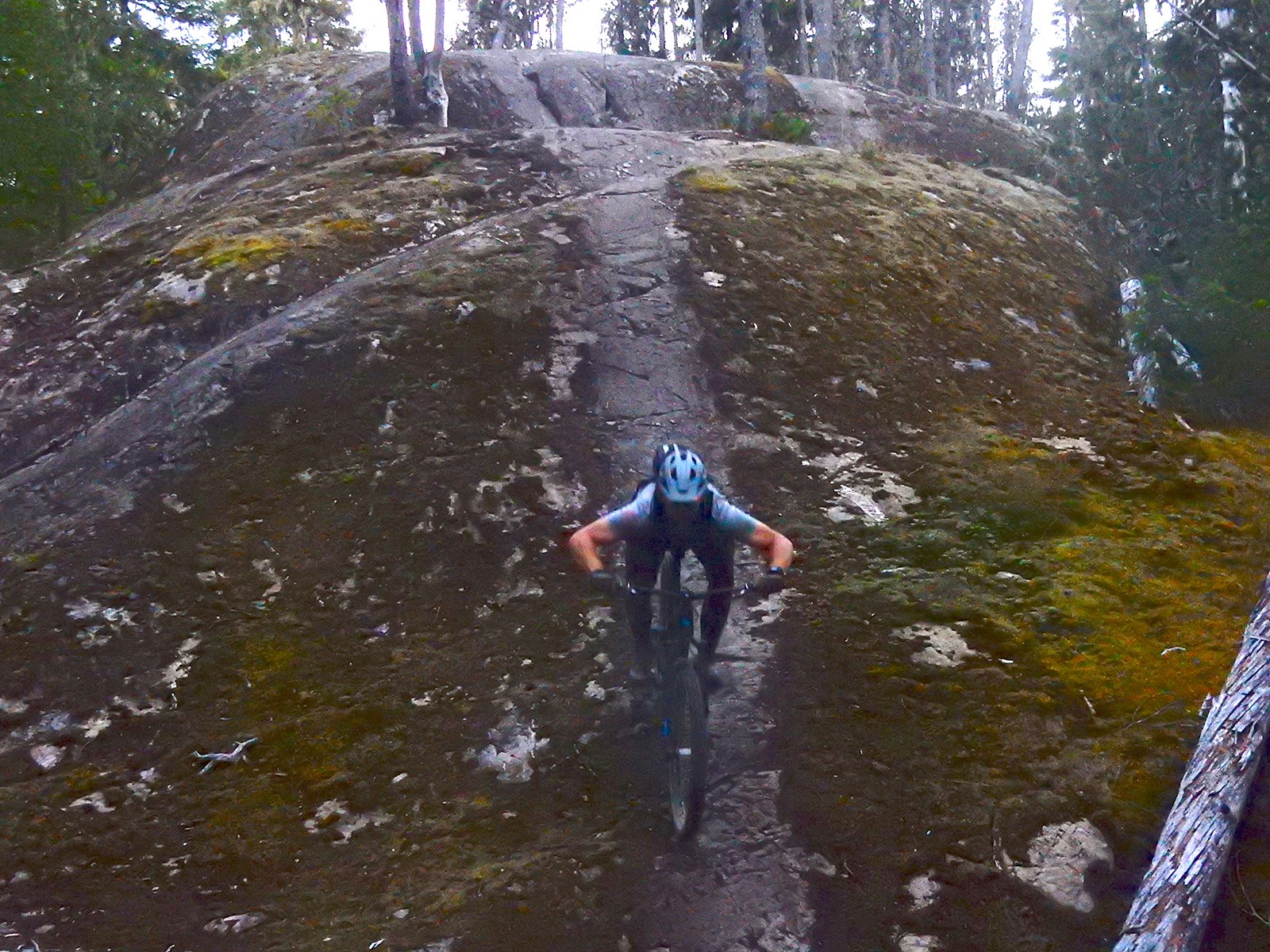 And we were surprised when it got dark. Pete Roggeman intruding on some granite.

Tim rips. He’s a much faster and more skilled rider than I and he was on my tail when things started to tip down on my second NFZ loop. Not wanting to slow him too much I began to point it and the trail began to make sense. Moves linked up with a little more speed and the line worked surprisingly well. It was that kind of fun. 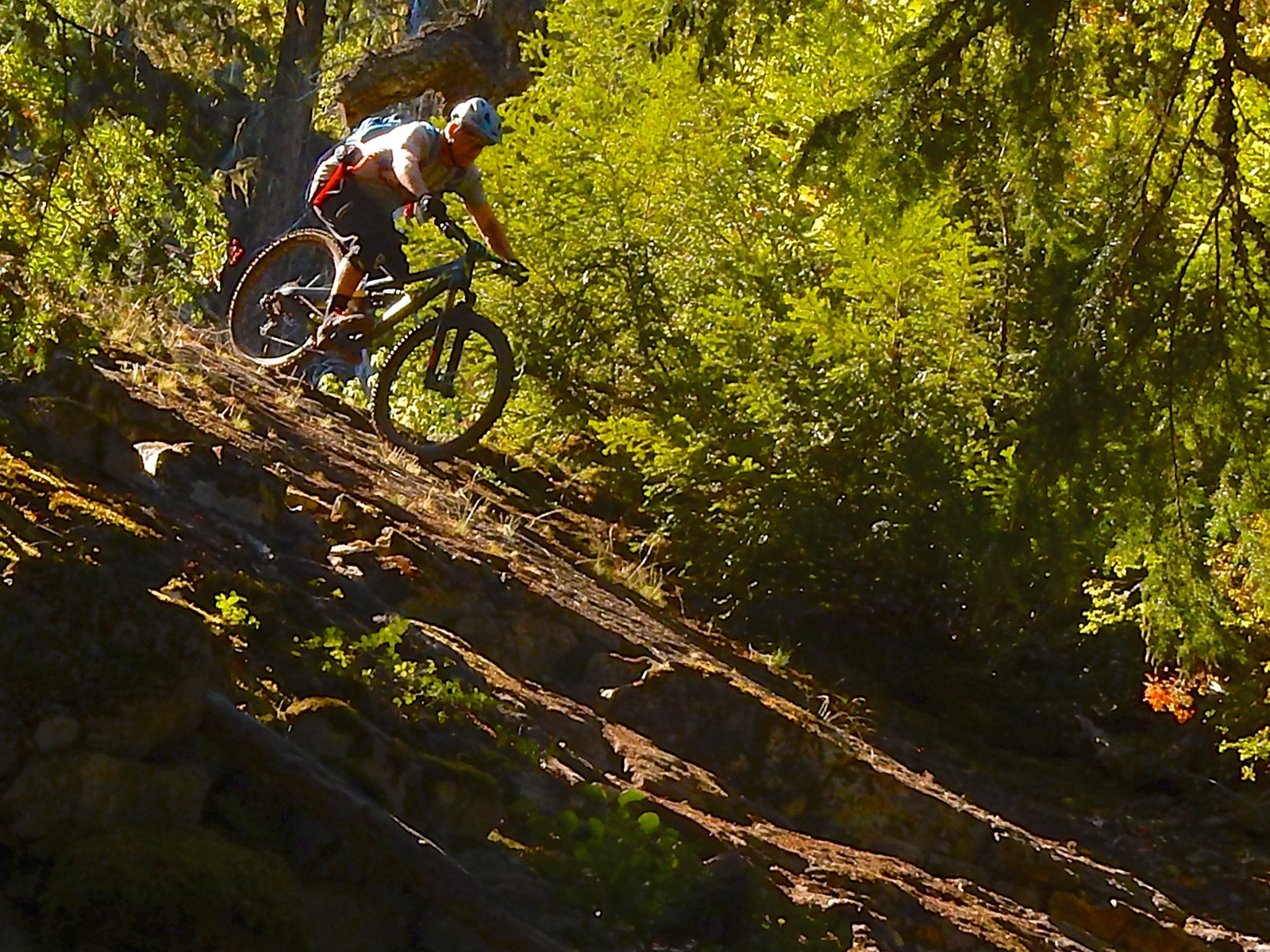 The chunky moves earlier in the trail made this faster section sweeter. And then I flatted for the second time in the NFZ. In the middle of the one FZ. I swear I don’t flat often. I managed a quick repair this time but it was getting dark. We did a few more steep climbs and slabby chutes down, and then bailed out early when we lost the light completely. 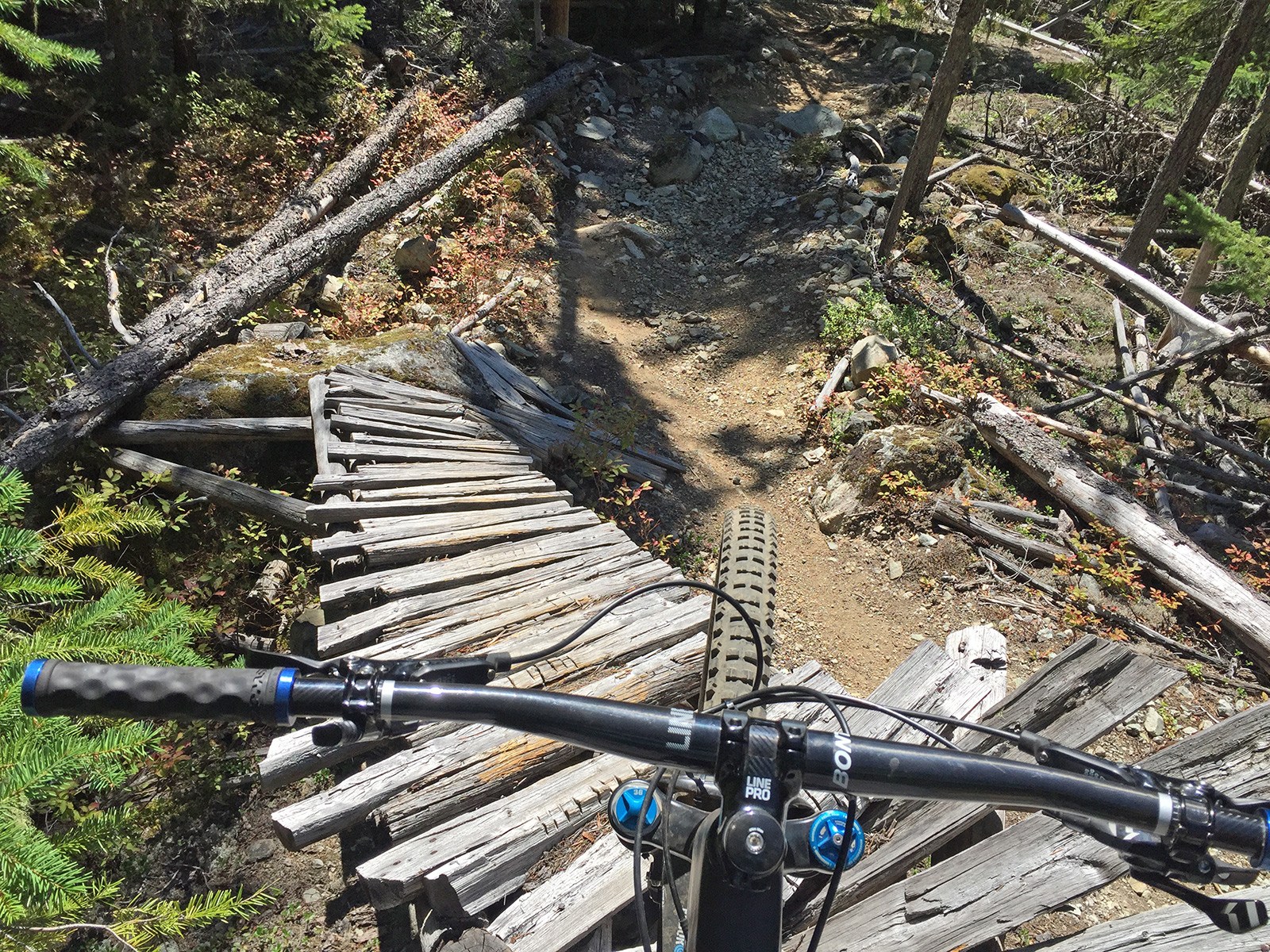 This woodwork looked dodgy but it was solid and well built.

I rode mountain bikes before I started riding the Shore, but before that I wasn’t really a mountain biker. I can deal with less flow than some but I find myself gravitating more and more towards smoother, faster and loamier lines. And yet there is a satisfaction to chunky trails that can’t be replaced. The NFZ dusts off long forgotten techniques. You have to thrust your bike up and over short rocky ups and place your rear wheel to slip it through narrow slots of root and rock. The NFZ reminds me what it’s like to be a beginner. And that seems to make me better. 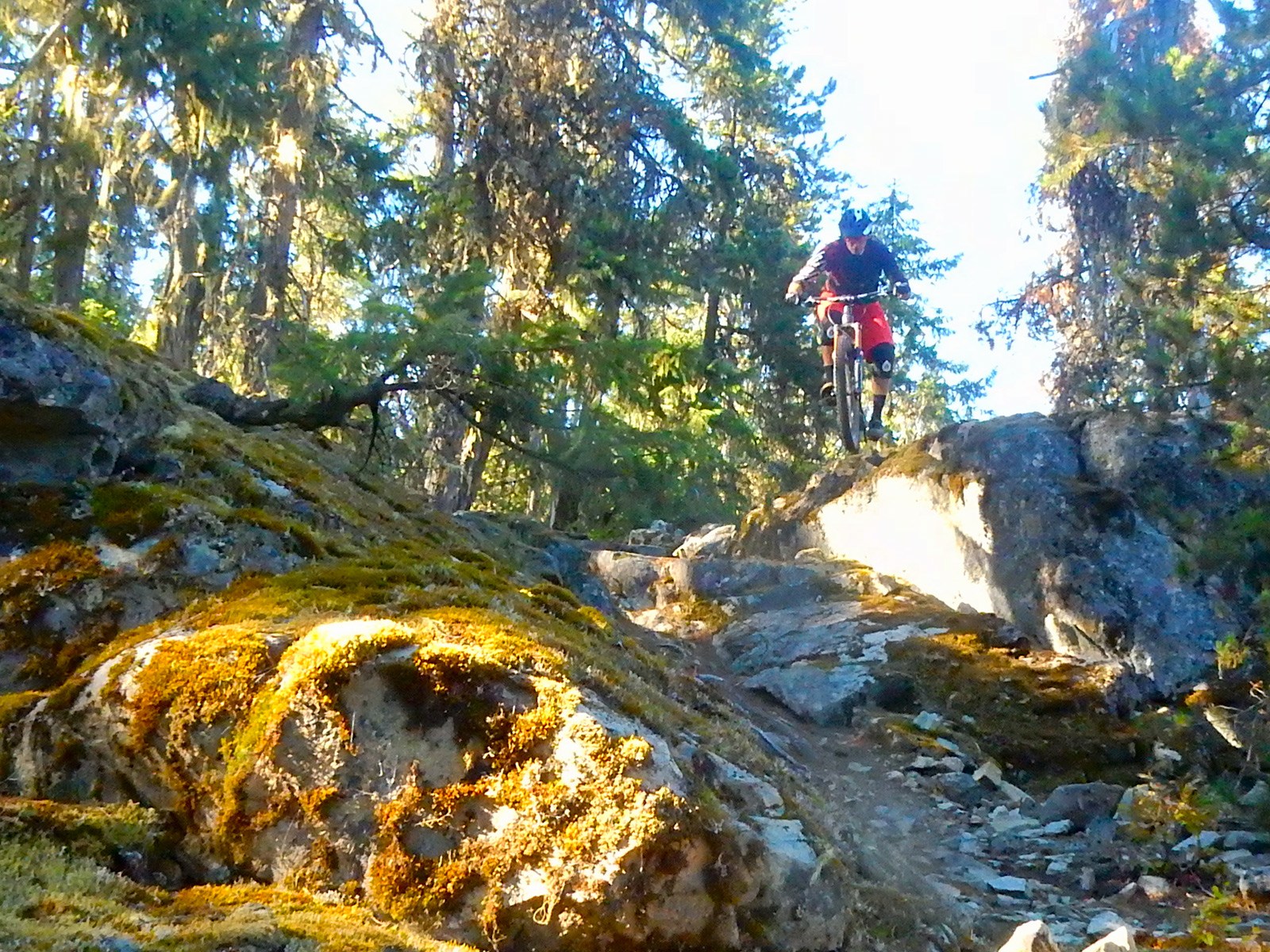 Tim Coleman creating some flow by getting off the ground.

Of course, you may be the kind of rider who hates flow. That rare breed who calls anything with berms boring. Like I used to. Learning to like those trails also made me better. Or at least less mediocre. And that’s made the whole thing better.

Keep hating trails. And talking about them. But maybe consider riding them sometimes as well.

Note – there are times when a title gets readers up in arms. I am NOT saying the trails in the NFZ are crappy. They were well built and fun and I’m keen to ride them some more. Hats off to WORCA and the amazing trail builders in Whistler!

What trails do you avoid?

NFZ trails is one of the best, what i rode there, also with Gargamel solo mission, snow on top, and pair of mama bear and cub footsteps in da snow 🙂 another level of adrenaline!

Great article. I've always enjoyed the diversity that mountain biking offers. When you're riding, there are no bad rides! Just did Comfortably Numb during Crankworx. Certainly more flowy than the NFZ but you gotta work for it.

I'm unfamiliar with the NFZ, but Comfortably Numb……BABY, one of my favorite trails in the world, esp when looped with Thrill Me Kill Me. A pretty epic day's ride!

I also lived in Whistler for a while and these (and many others like them) were some of my favourite trails. Coming from Ontario, the first few months of riding them beat me down pretty hard, but after a while I learned to love the NFZ-type experience. I like flowy trails as much as the next guy, but there's something special about trails that make you work and think really hard, the entire time.

Love the tight junky trails, and your writing about the joy and frustrations of riding and trails rather than endless advertorials for comps and gear.

Lived in Emerald for for a couple years, rode these all the time great trails. Trial & Error is a great one, the one rock roll that bucks up your back tire!

In Whistler their trail association is called WORCA in Squamish Its SORCA i dont know about other places but you guys made a little mistake. I lived In Emerald Estates in 2002'ish and there was very little flow then either. But what It lacked in flow it make up for by being just outside my front door. The highlight back then in the FR days was a small gap off the water tower to the bank and the sections in your photos. I resisted the no-flow back then by heaping logs onto the flat drop landings, this gave me localized satisfaction but I was unable to bring any sustained flow or squeeze much satisfaction from my efforts . It was so un-inspiring I would ride my FR bike to A River Runs Through It, just to bring a smile to my stone cold mug. Eventually I discovered Gargamel, Thrill Me Drill Me, and my fav, Young Lust at least they had a nuance of "The Bro Flow" where I could get my huck on.
I've never been there back to ride.