I was trying not to make eye contact. I know from experience that if I roll up to the first move on a trail and then back away, the pattern is set. And I was itching for a good ride after the previous day’s poor showing.

This was the lens through which I viewed the first rock face of the second phase of PhD, just north of Whistler. It’s steep but not crazy steep, but it’s long, and losing traction for a fraction of a second could clearly spell disaster. So I didn’t even roll up to it. Everyone else rode it and there were a couple of non-fatal mishaps (tree strike by Ryan!), but I was okay to take the squid line, which wasn’t trivial either. 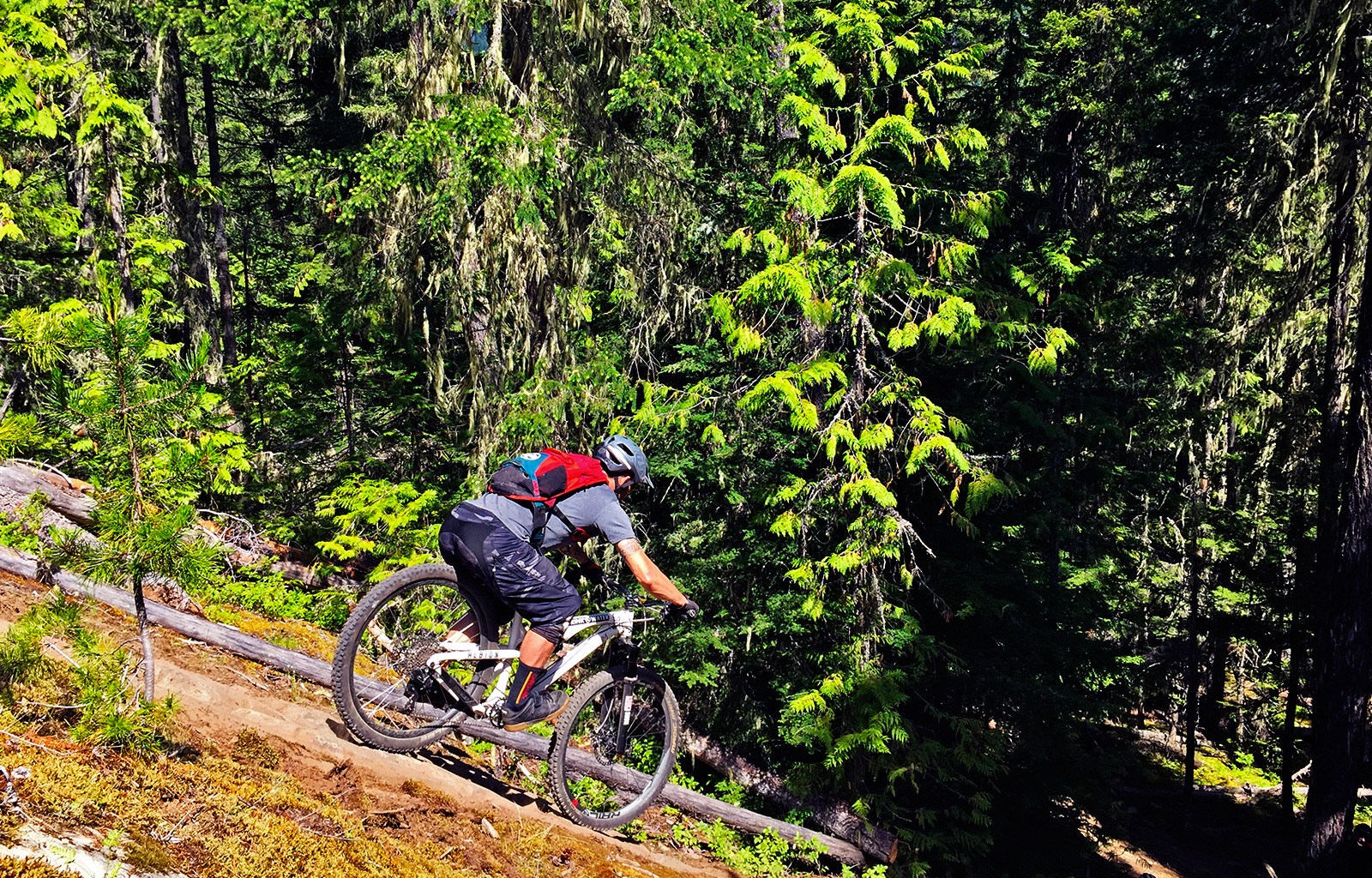 It’s always fascinated me; the process that makes athletes say yes or no in the face of dangerous moves. The way a drop or gap or rock face or even a skinny can make complete sense to us one day, before we even start to roll in, but look impossible the next.

Some riders don’t like to operate in this uncertain zone, and they are likely smarter than the rest of us (aversion to risk is in our DNA, which is one reason your ancestors survived to pass their genes on). These sensible riders frequent trails they can always clean so they lack this binary measure of success. And there is nothing wrong with that (I spend much more time riding like this than in the past), but some of us need that charge; that buzz from conquering a move when significant portions are our brain are screaming at us to back away. 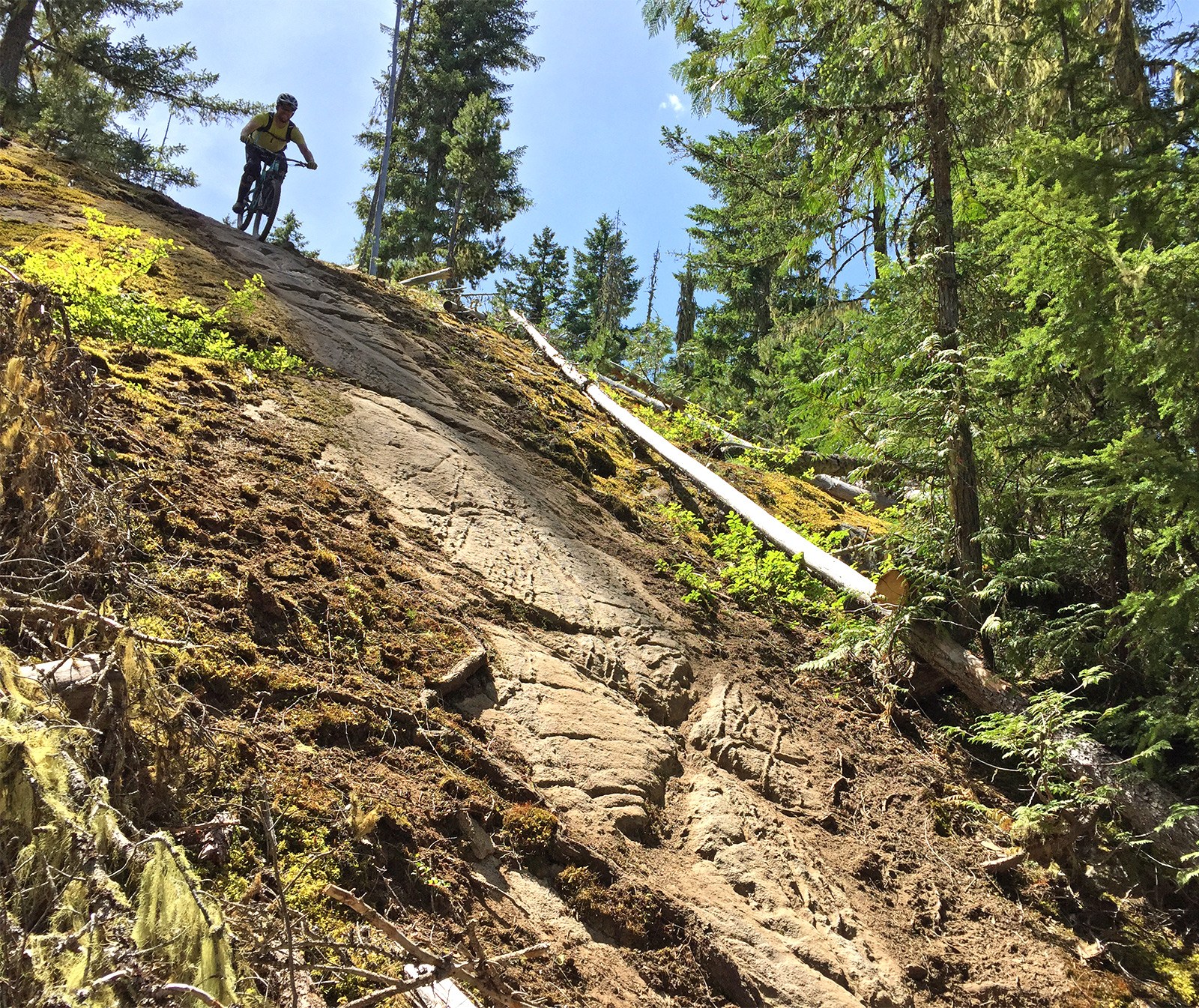 How exactly do we process that decision? And how good at it are we? Some days we push through the fear and uncertainty and make it happen, successfully or not, and other days we put our tails between our legs and feel shame. And of course there are moves we know we’ll never conquer for reasons that keep our hearts beating.

The information that our brains and bodies collaborate to send to our pre-frontal cortex, where decision making happens, isn’t always reliable. And it’s not hard to see why. The amount of data being processed at a given time, for a specific move, is worthy of a chess grandmaster. To start there are three questions to answer with the help of hockey analogies:

If we look at odds of success there is an almost infinite number of factors in the physical world. What are the current conditions? Is that patch icy or just wet? How’s the wind? Is the ground running too slow or too fast? Just how hard is that rock? 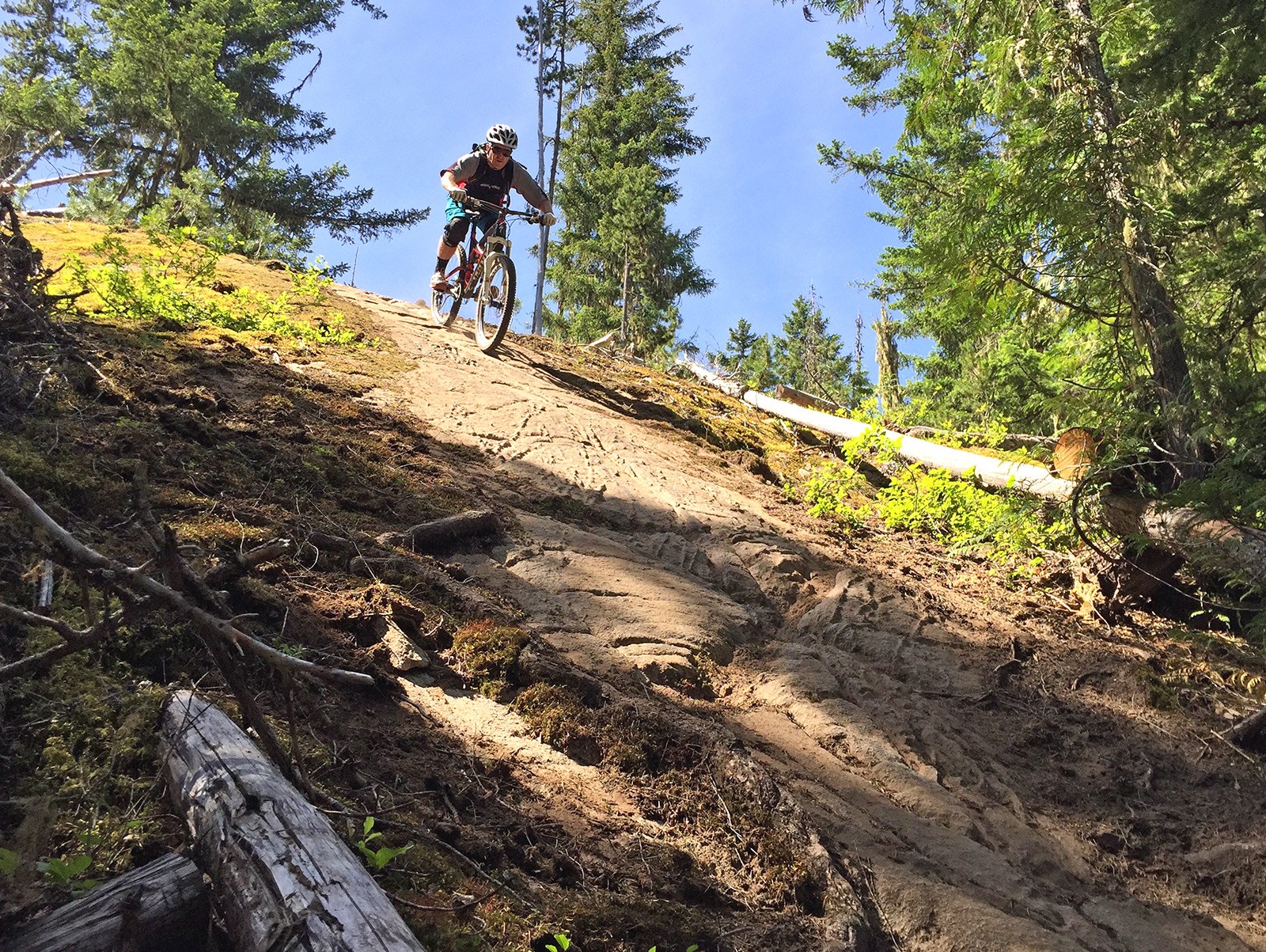 Ryan stuck the take off but his landing involved the help of a tree. Once the bars were straightened and his flat was fixed he was on his way without a scratch. Photo – Pete Roggeman

And then there is your bike. Will these mostly-shredded tires do the job? Should I be worried that my brake levers hit the bar? Have I ridden this bike enough to know what it’s going to do when faced with a slam into the bottom of this near vertical pitch?

And of course there is that person riding the bike. Is this something you’ve done before successfully? Or does it look a little like that hip that left you in a sling for July and August last year? One riding buddy rode around. He usually out-rides you. But another buddy made it look easy – and you usually school him. The leader of your pack did it while absent-mindedly suckling his camelbak nipple – and he says it’s all there. He always says that. 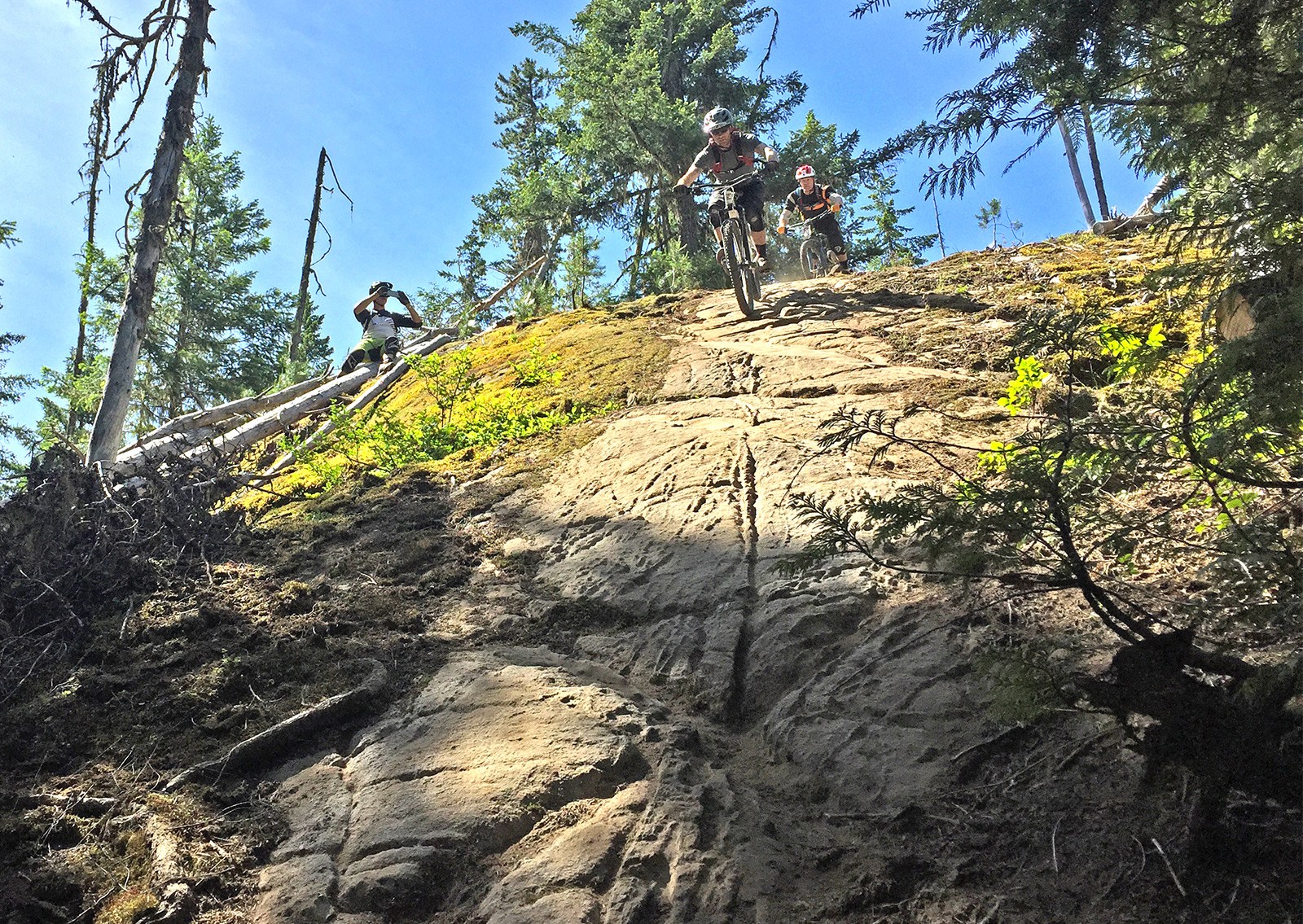 Our imaginations are relatively good at evaluating a few potential negative outcomes – but anyone who has ridden long enough knows that randomness has more in store for us than we could ever accurately calculate. If we could we’d just stay home.

Can we hack this process? Is there anything we can do to influence how we see the trail? One thing I’ve noticed is that my body position can make a huge difference to my confidence. When your chin is up by your stem something steep doesn’t look so bad, and you’re in better position to take action if something goes wrong. When I’m rolling into anything while shying away from the front of the bike, the stink of failure fills my nostrils. 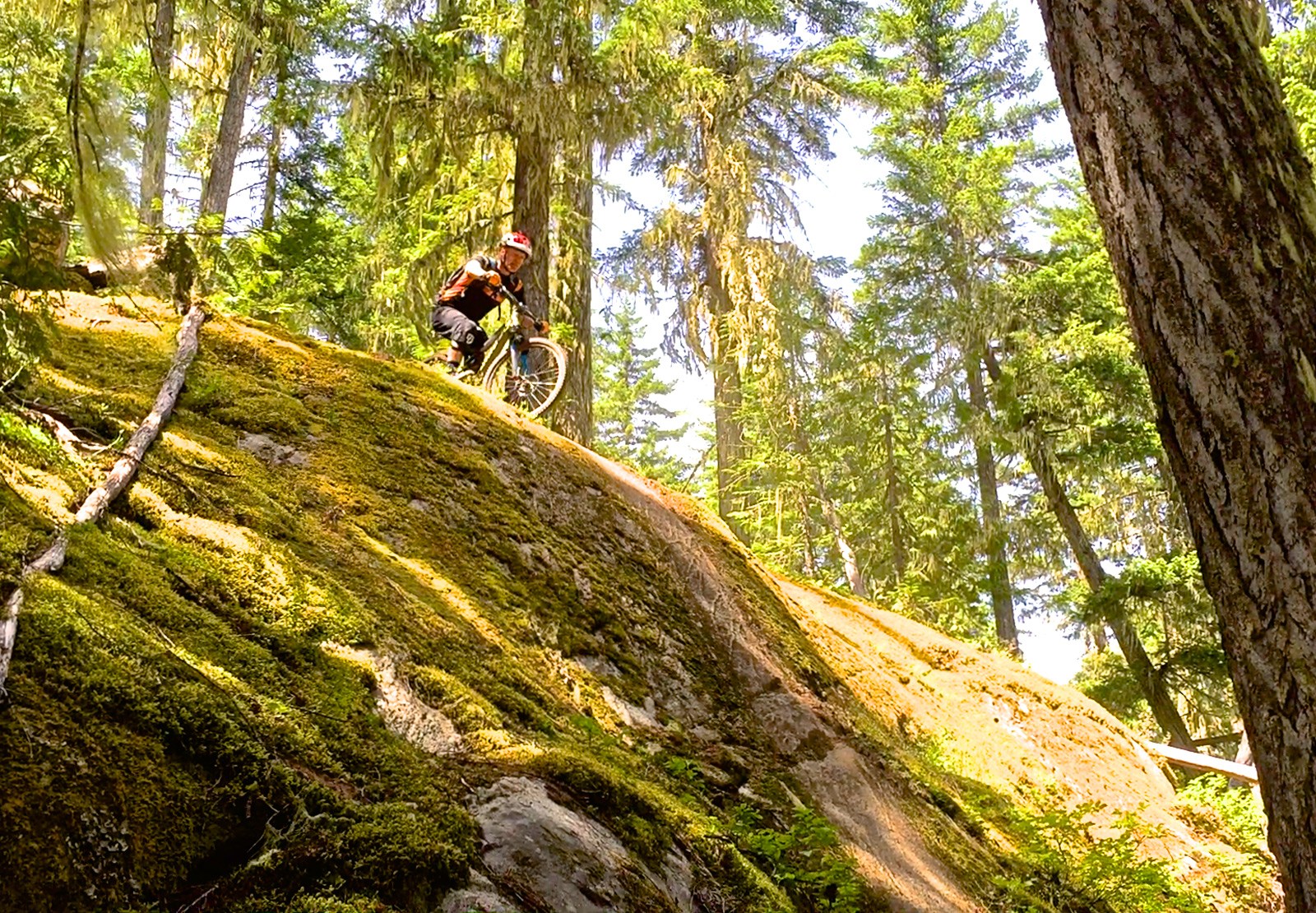 Social Psychologist Amy Cuddy, in her Ted Talk that’s been viewed 26m times, tells us that science has long known non-verbal cues influence the way others see us. What is relatively new is the discovery that our body position can alter the way we see ourselves – and the way we act. In fact our body position can affect the hormones we produce in the face of a stressful situation. Standing in a traditionally dominant stance for just two minutes can increase our testosterone (making us feel more confident) and decrease our cortisol (making us less stress reactive). So maybe getting into an aggressive riding stance like Chris Kovarik can make us better riders?

The second rock face on this section of PhD is probably the worst on the trail. Not so much because of the length nor the angle, although both are formidable. The roll out is a trough you must hit, and a bike length after you’ve come to earth there’s a small drop, then a right-left chicane to avoid a tree. It’s like a jump with a great take-off but a terrible landing. Seb Kemp rode this one before any of us arrived but he’s too good to aid our calculations. 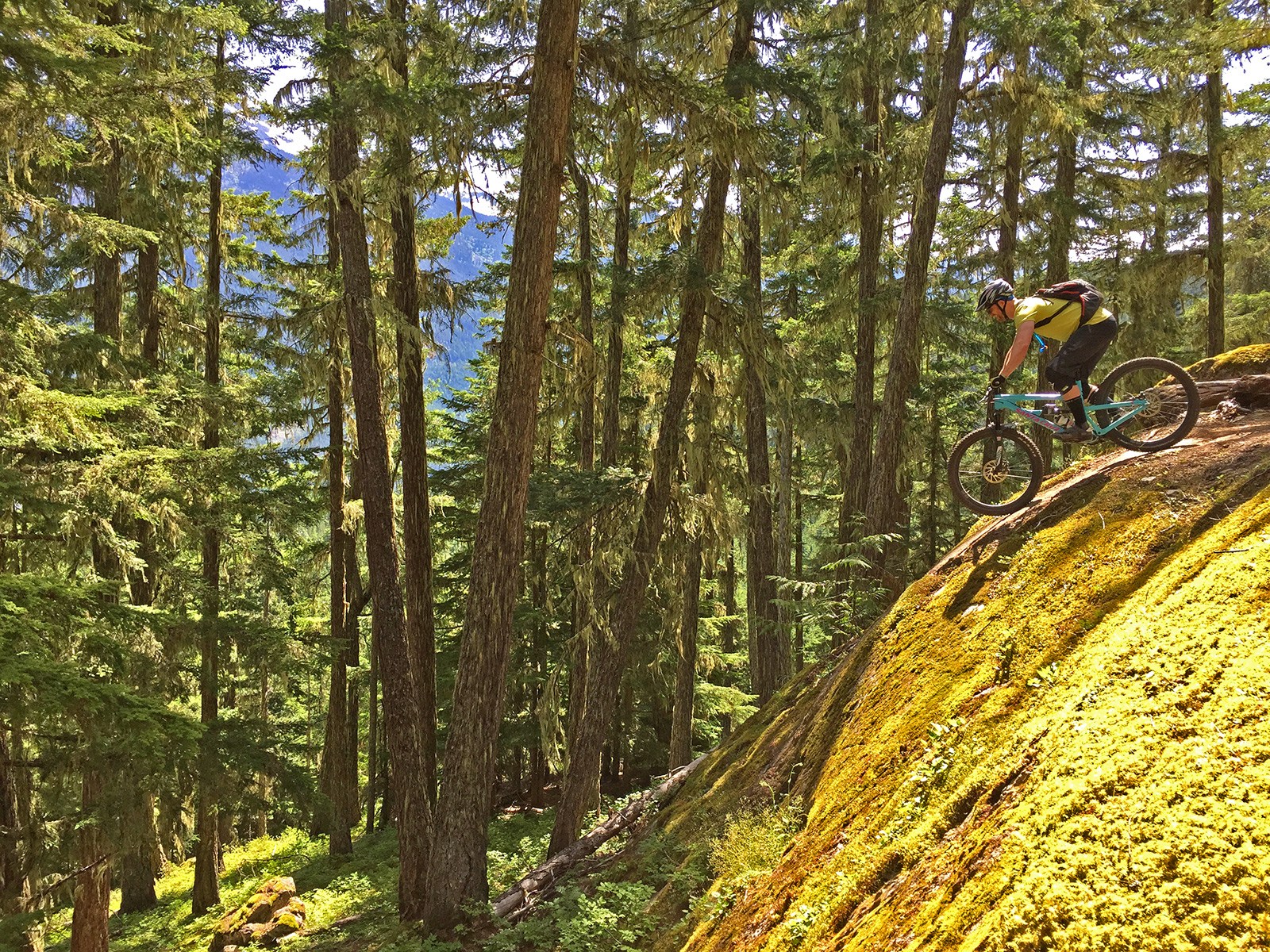 Past the point of no return, Pete Roggeman tips it over the second rock face. Photo – Ryan Robertson

So the shot percentage looked low, and the rocks and trees made the penalty box deep and the potential sentence long. Pete rolled it like a boss, narrowly avoiding disaster by clicking out one foot and swinging it behind like a rudder. The rest of us skipped it, and I again avoided rolling up. 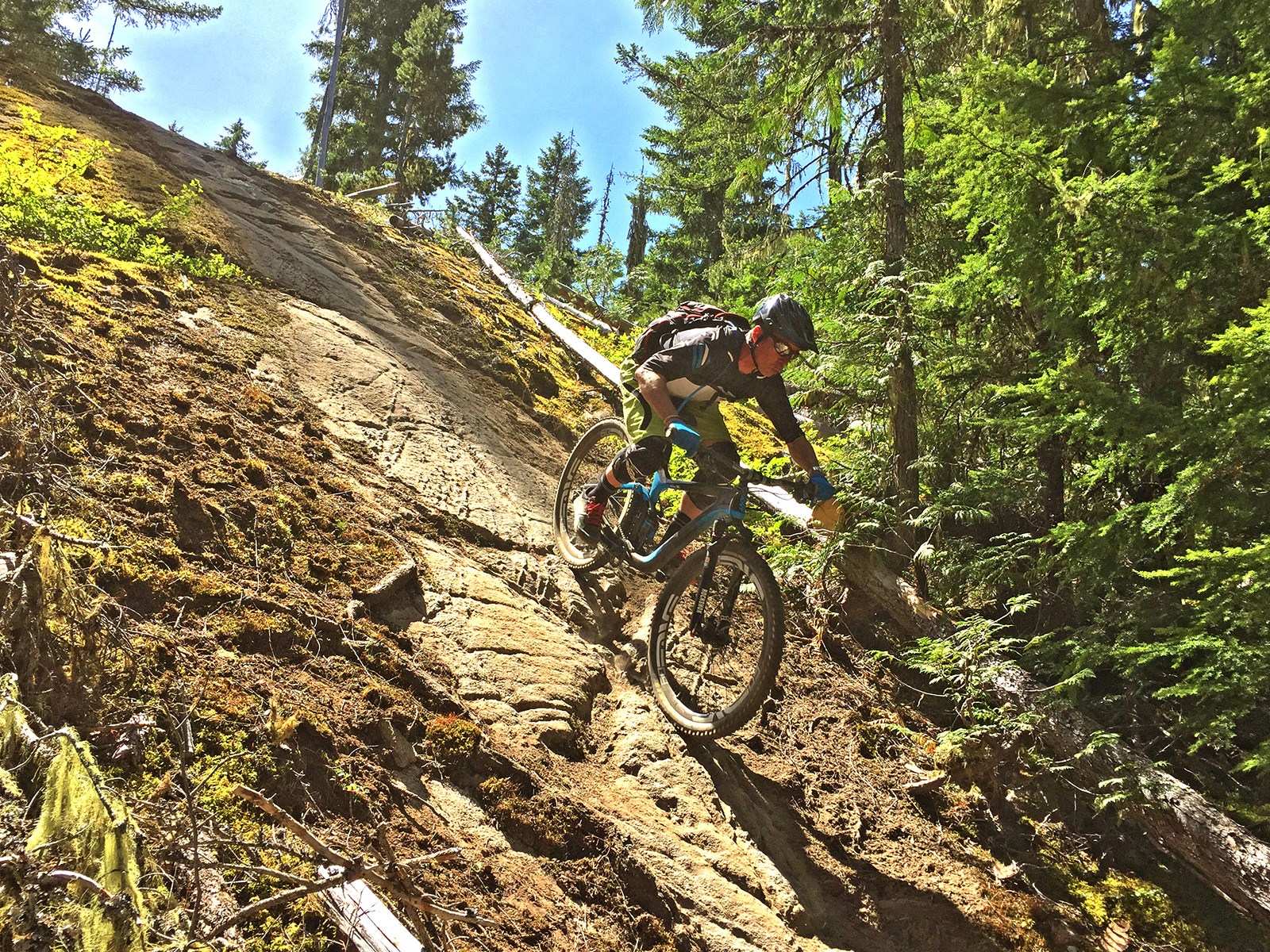 Pushing back the fear on round two; Cam rolls it. Photo – Ryan Robertson

On lap two we explored upper PhD which continued the theme. The grip was good and I started to get the feel. By the time we got to the lower section I was entering the zone and I rode that troublesome first slab fine, while only soiling myself a little. The second one looked better this time around (I did make eye contact) but my pre-frontal cortex wasn’t having it. I was in no mood for a helicopter ride. Besting something that had taken me down earlier boosted my confidence for the rest of the ride though, and kept me pumped up long after the ride was done. 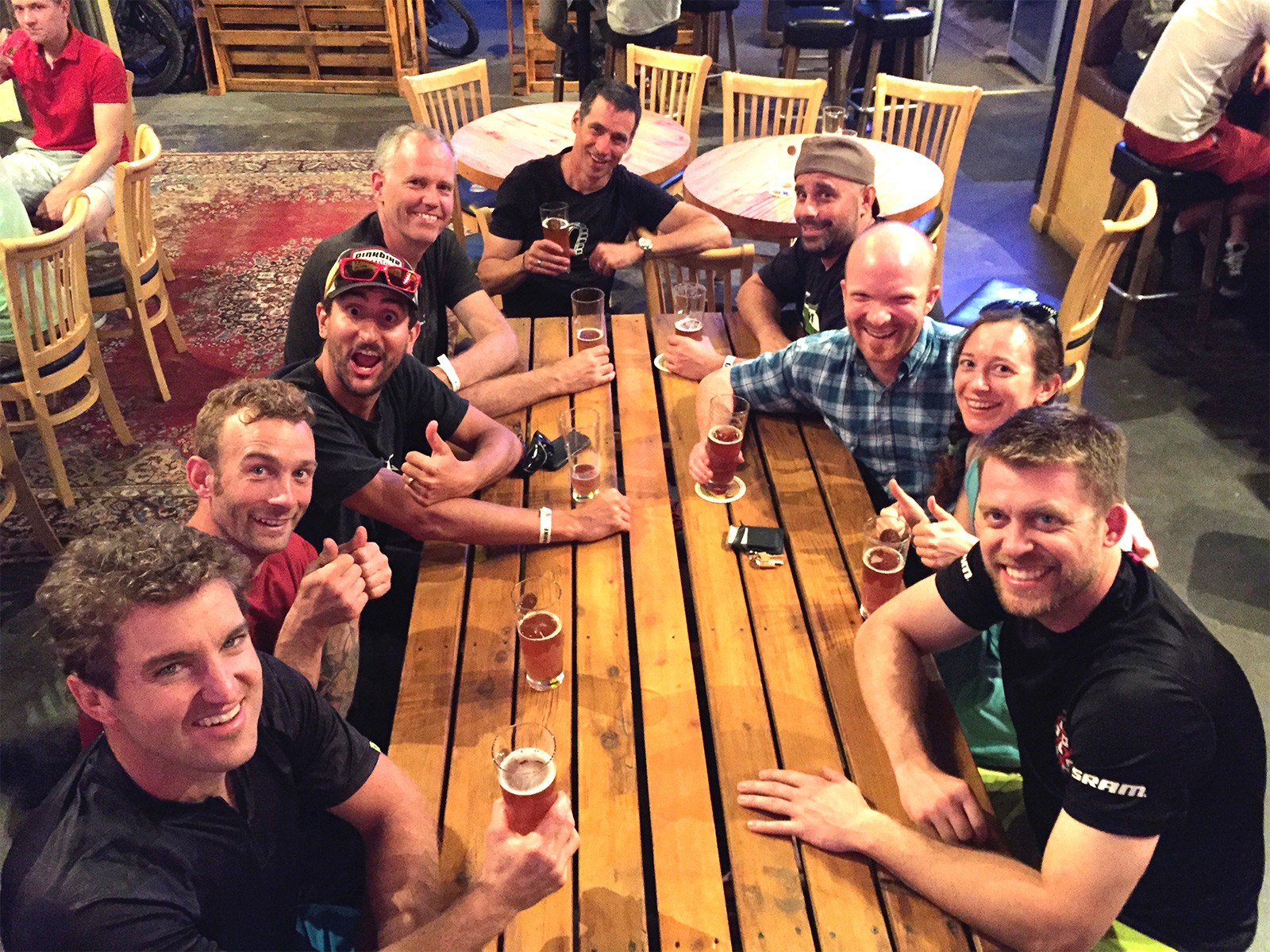 Beers to celebrate? Don’t mind if we do.

Conquering fears keeps us feeling alive. And while the bony and perilous world of mountain biking is far more dangerous than Tinder or a job interview, those produce more stress for most of us. Thankfully the things we learn on the trail can unquestionably steady our knees and calm our voices when we need what either of those services can provide.

Do you push through the fear, or listen to the sensible part of your grey matter?

Max Flat Pedal Grip vs Some Slip – What Are Riders After?

In case you didn't know.

I'd like to throw out some big props to the dude who brushed that first big slab off and made it nice and fun to ride! 😀 I had no qualms about rolling into it, even after aborting on previous rides. I also have a strong self preservation gene and that knowledge gave me the extra bit of confidence I needed to go past the point of no return.

I'm quite strong in the self preservation gene. I also get certain mental blocks sometimes at some crux moves that often aren't that hard but just look sketchy. Things I've ridden but for some reason I get there and stop. This is a mental skill where you suppress the fear and I guess some would quickly analyze the move, see the line and consequences and ride it. In a similar vein, if I crash I often go back to analyze what I did wrong so that I don't have an irrational fear like some people do. Someone I know once said, "I have more respect for a rider that looks and decides to walk something than the rider that just goes and rag dolls down some feature."

The irony in my experience is that my most serious injuries have come from messing around in the parking lot, riding to the store or not paying enough attention on the mellow XC ride and riding straight off a corner into a tree. I'm too scared these days to do the big drops and doubles I used to just because I let my mind talk me out of doing them even though I know I totally could. I guess it's just part of getting old;)

Great article… at 47 I am not prepared to take unneccessary risks even if I know i can clean a section…. my ego has long since been banished to the deep recesses of my brain and is locked away. Trust your instincts and the ride will always be good.

hey i broke my saddle off with my nuts on that first PHD rollin going sideways at the bottom but did handle the rest of the trail. Ahhhh such bad memories

Bending steel with your crotch does NOT make you a superhero.

I've always said that when you ride up to a stunt you can see the future.

If you don't see yourself riding cleanly off it, DON'T DO IT!!!

Glad to know there are other mortals that exist! Well laid out Cam.

Understanding the factors that make up the limits of your riding and tackling/improving on them them bit by bit I find has helped me progress.

Another thing I've learnt is when in a group ride to balance the man up, go for it, c'mon-you-can-do-it-easy-peasy words of encouragement with my own gut instinct.

Thanks tuskalooa! That is indeed a tough balance. There are times when we are stopped atop something we know we can clean - and that's when we should use the testosterone (or estrogen) mob to our advantage. Other times we need to try and block it out. One of those times when being an old bastard helps.

What an excellent article! Its all about controlling the chimp in your head, he's the irrational one. Read The Chimp Paradox for more information on this. The concept helped Sir Chris Hoy win his Olympic gold medals.
P.S. Can't wait for the IFHT boys to make a Camping or clamping, should you say Go or should you say No video. It'll be a blast!