The 2014 Genius 700 Tuned is an unusual beast. Point a finger at our Euro brethren for much of the quirky. The bike ships with a chain guide but with no dropper post.  It has 150mm of travel but Scott calls it a trail bike. At aftermarket the Fox 32 Float CTD fork is only available up to 140mm but this one bounces to 150.  Nic Sims at Scott told me this bike is aimed at old country weight weenies (he didn’t say that exactly of course). Building the lightest 150mm 650b machine was the goal and the fully carbonized  700 Tuned weighs a shocking 23.35 lbs out of the box without pedals.

Other notable features are a SRAM XX 1 drivetrain cross pollinated with XTR race brakes. It also features Scott’s tri-mode Twinloc remote adjustable suspension (front and rear with a single thumb-actuated lever to control both) and a head angle that can be changed from 67.9° to 68.4° by swapping a chip at the rear shock mount. 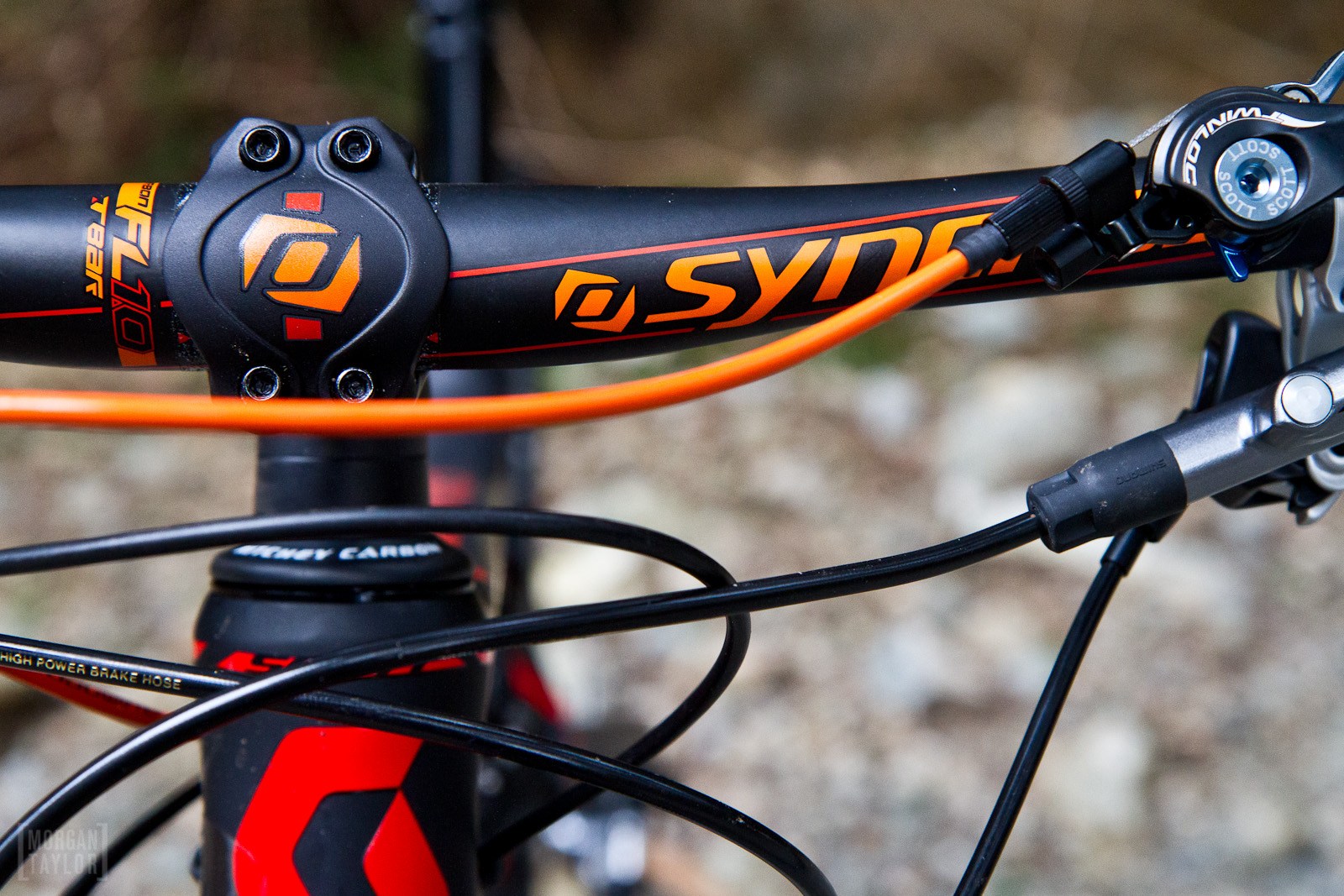 Our Twinloc lever wasn’t yet a twin when this shot was taken. There are now two orange-housed cables running from the lever. One (the one you can see) extends back to manipulate the rear shock while the other drops to the fork to do the same. The Fox Nude/SCOTT rear shock has three modes; climb, traction control (as opposed to trail for a stock Fox CTD which makes it CTCD – got that?) which adds compression damping and reduces rear travel from 150 to 120mm eliminating the bottom 30mm, and descend. The fork is a standard CTD in regards to damping and one lever engages both dampers as well as a single release button. 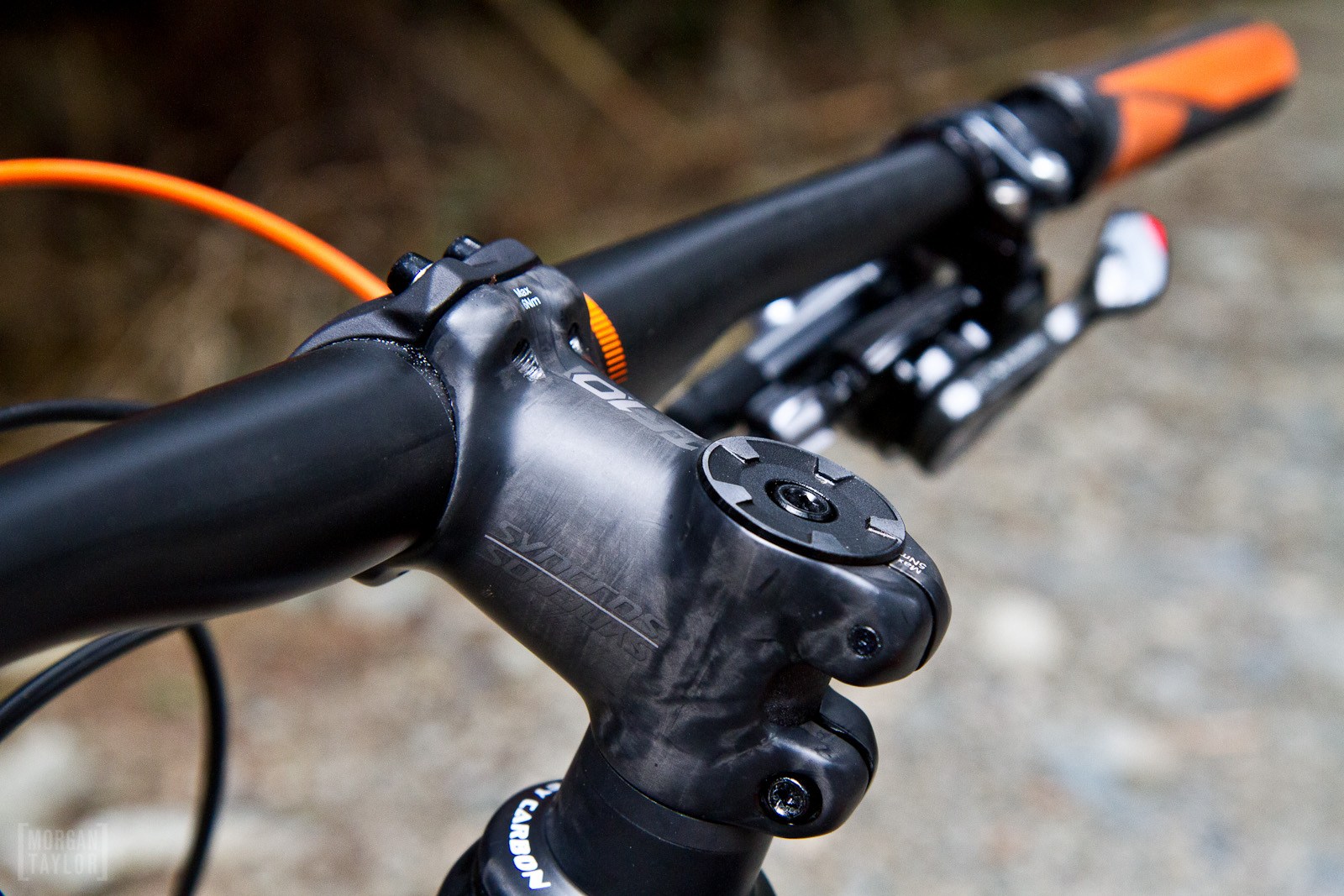 Syncros components (owned by Scott) feature prominently throughout. This TR1.0 stem has an aluminum skeleton fortified with carbon. The stock stem had orange accents and was closer to 80mm but Scott shipped us one that measures 56 or so to accommodate my quirks. 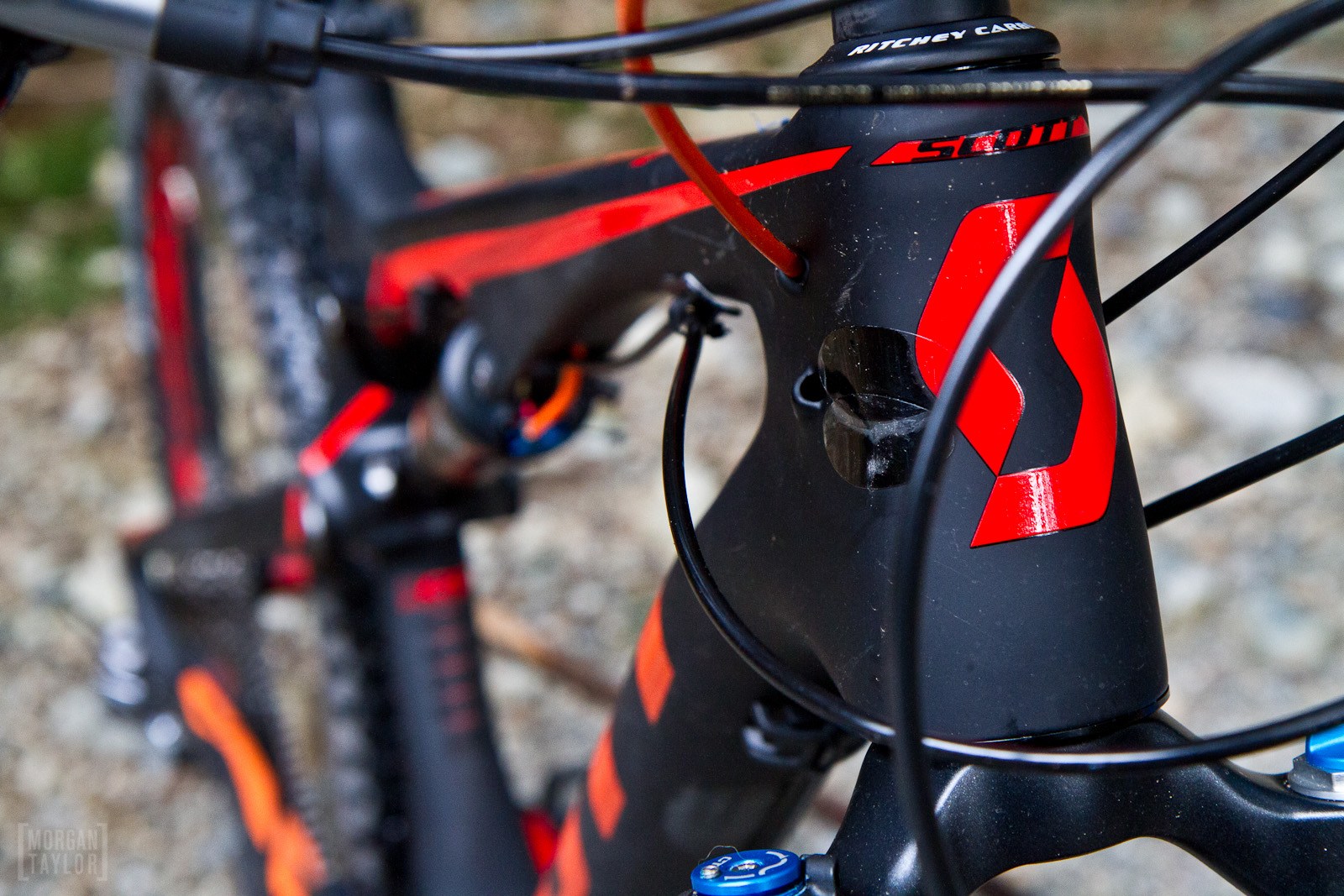 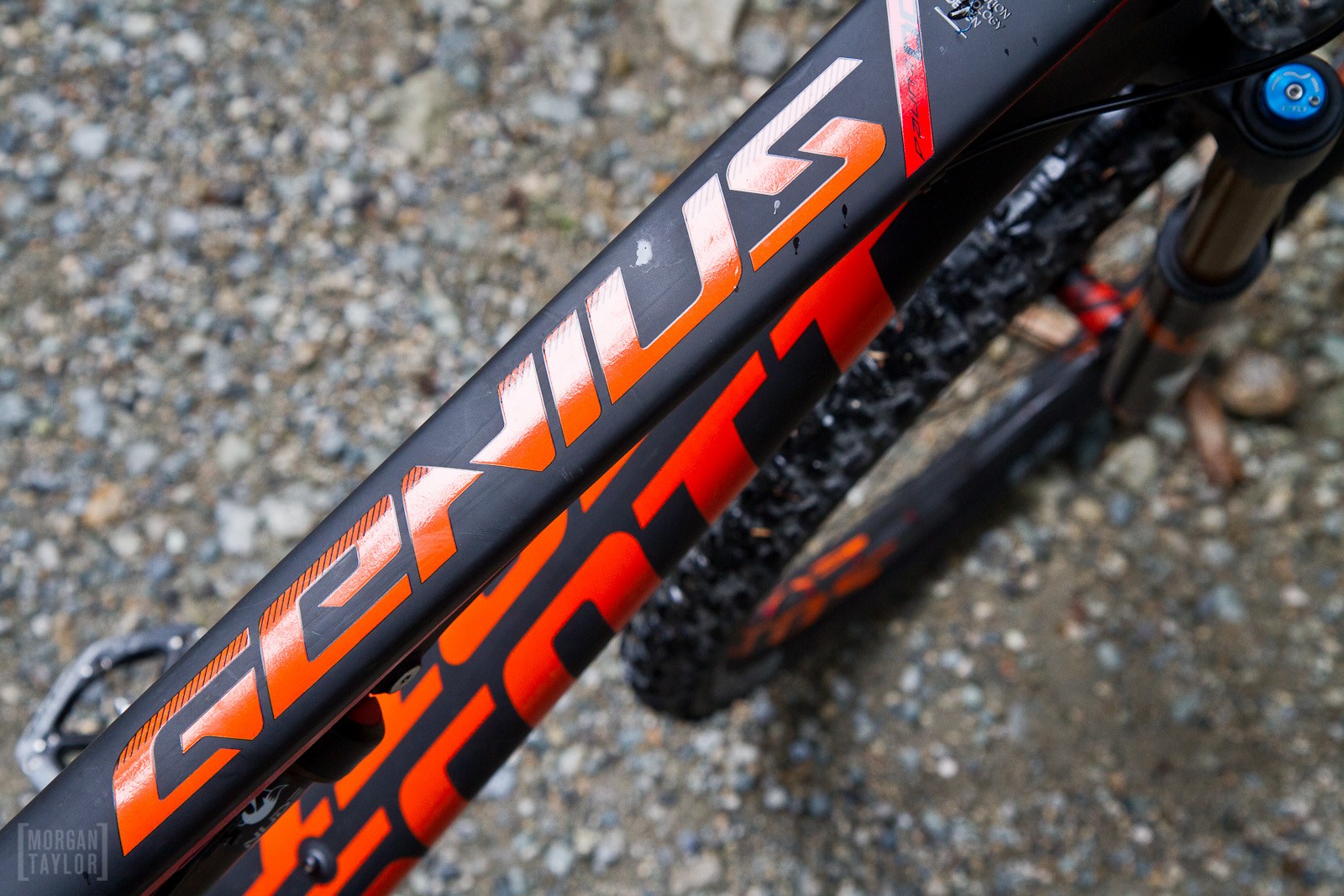 Scott wants you to know how smart they think you are for choosing their bike. 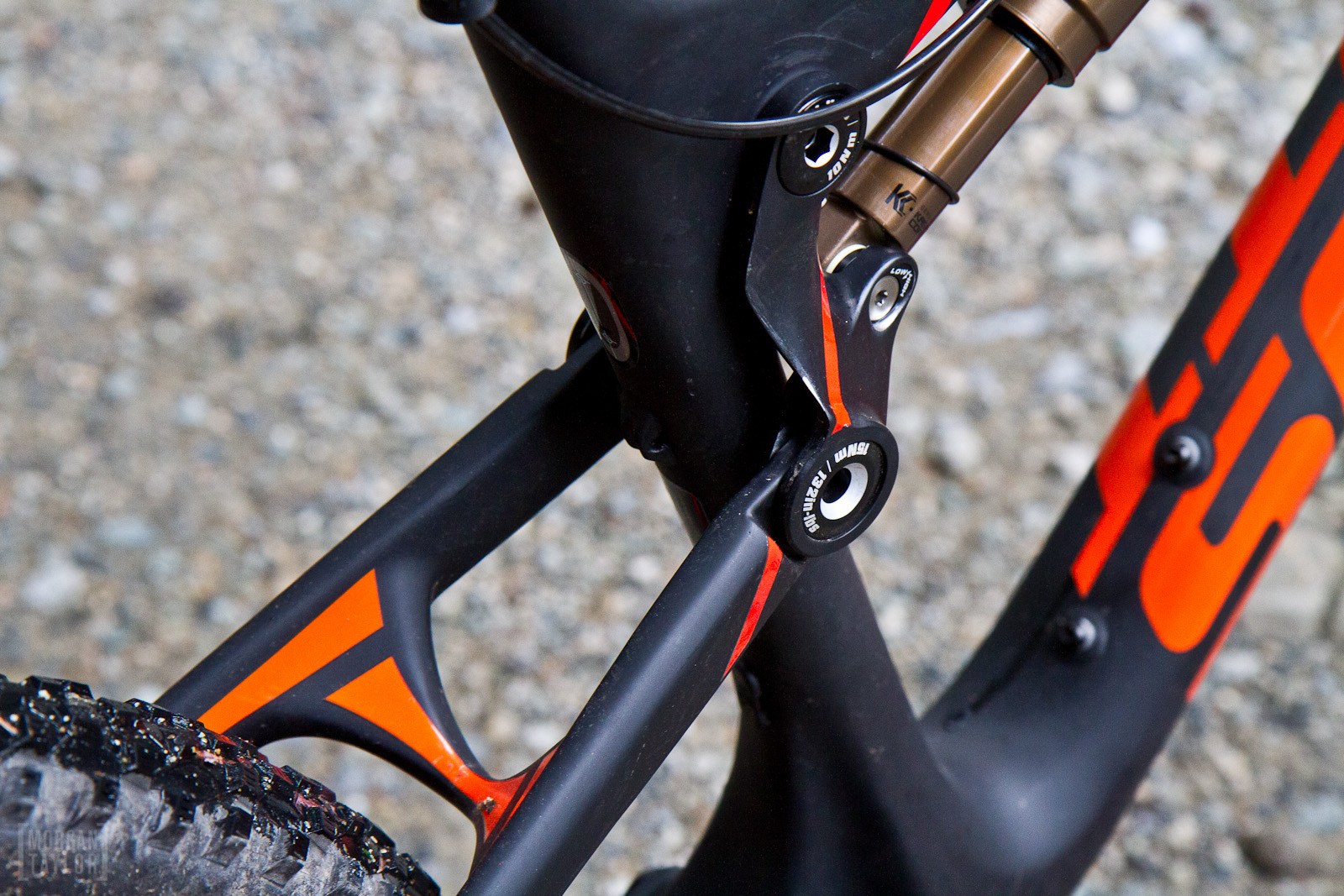 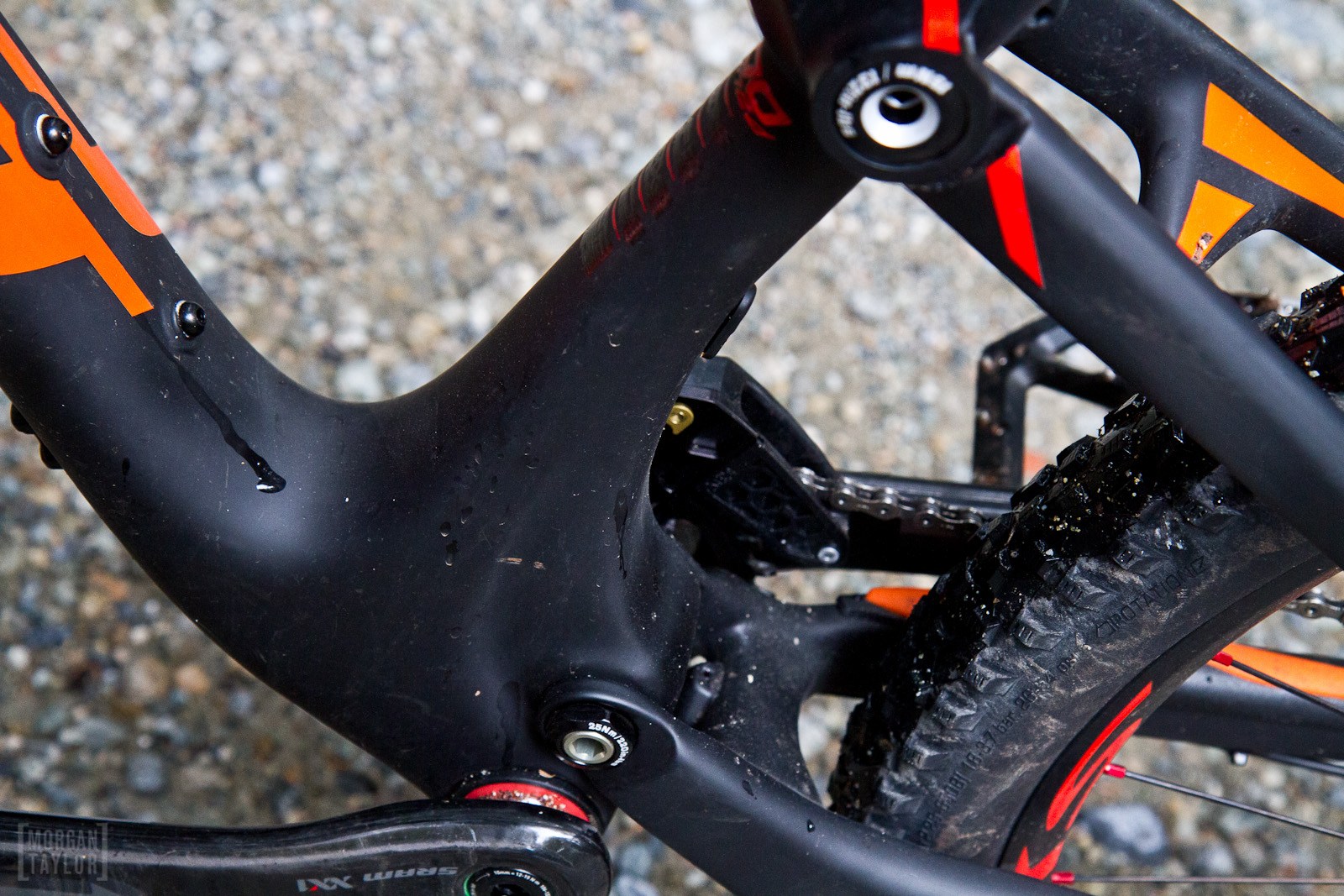 The suspension design allows for lots of mud clearance between the rear wheel and the seat tube. 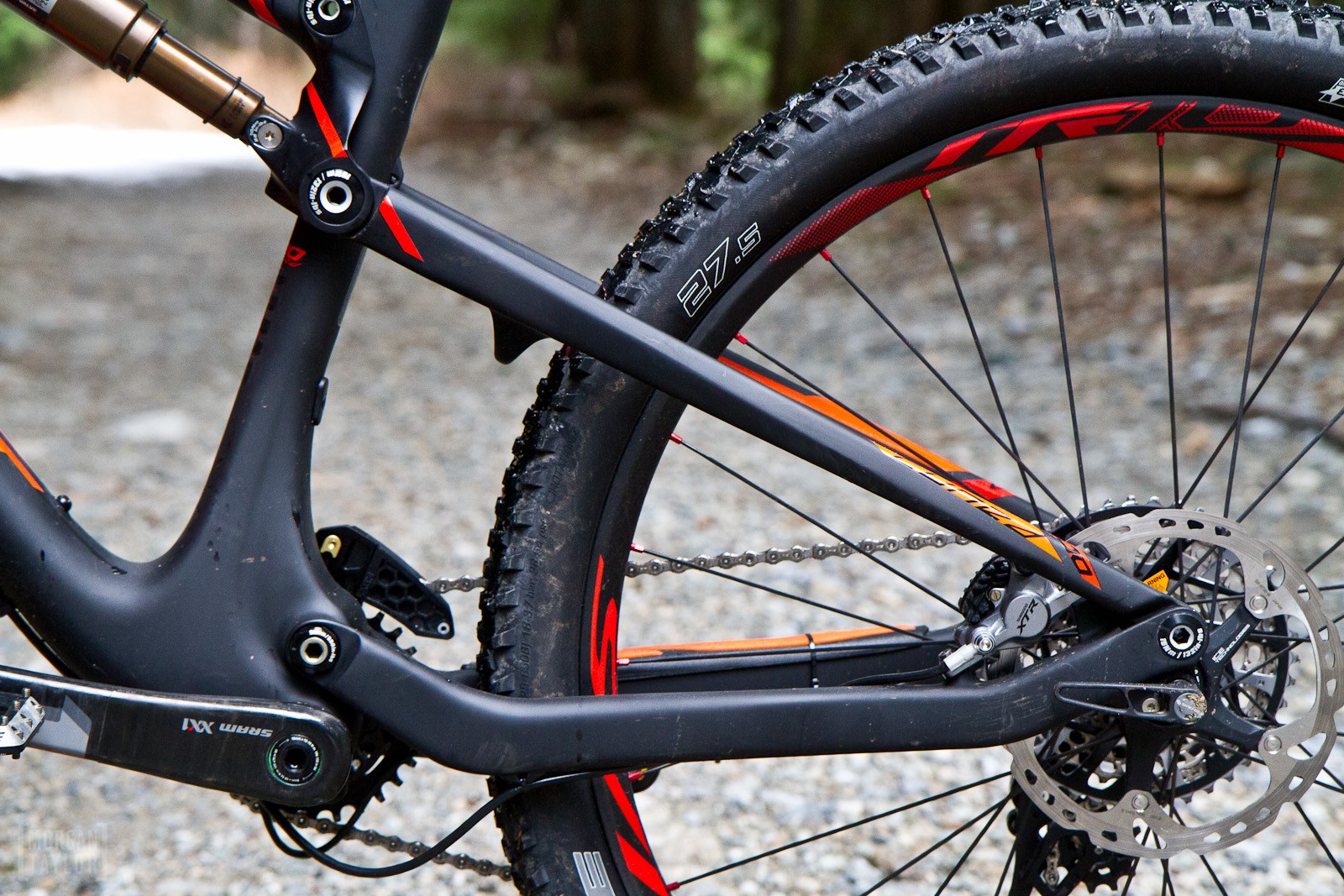 The Scott’s rear linkage, with the axle almost directly below the pivot. 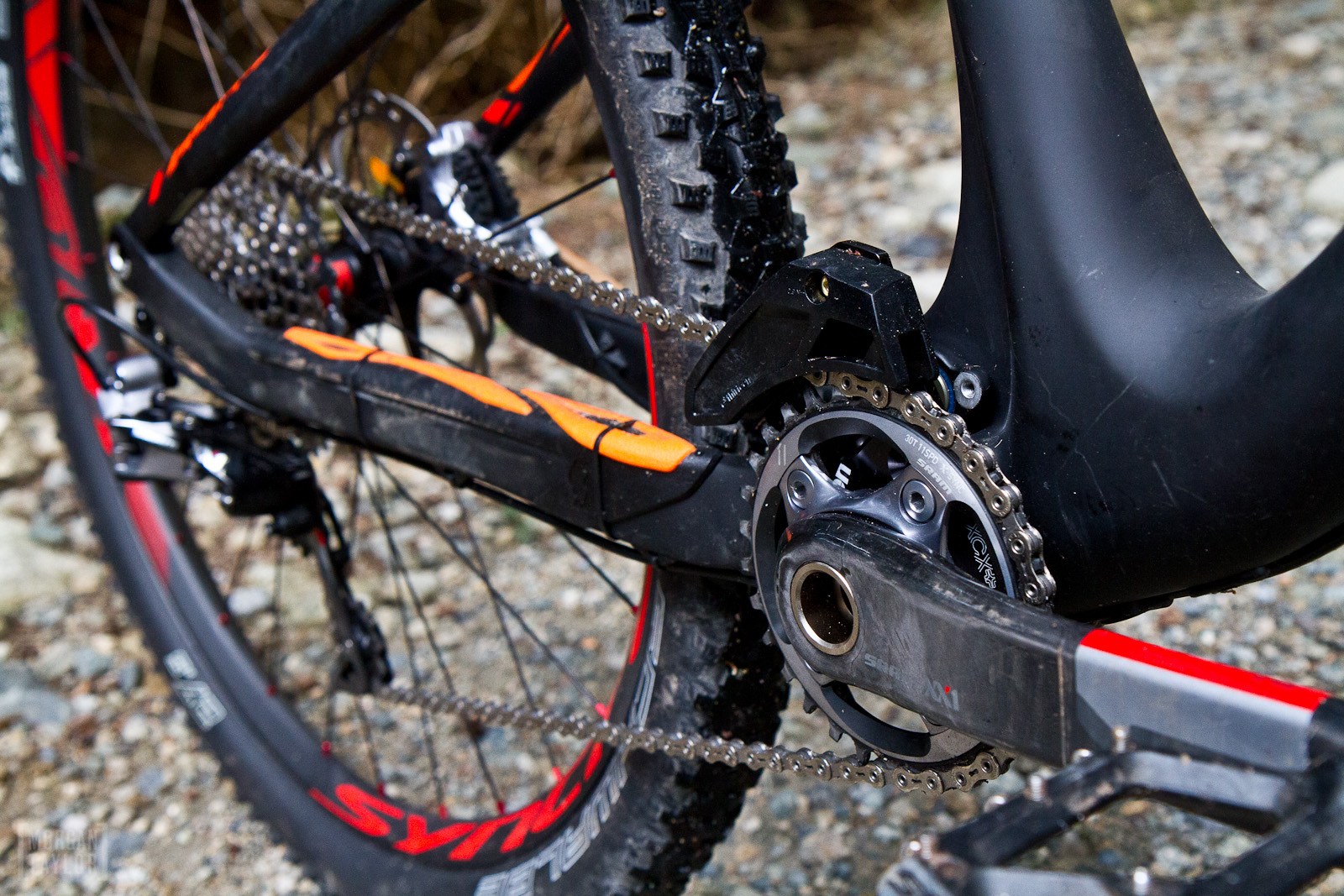 XX1 augmented by an E13 XCX Chainguide. Rumour has it someone has dropped a chain using XX1 – but I’ve never witnessed it first hand. 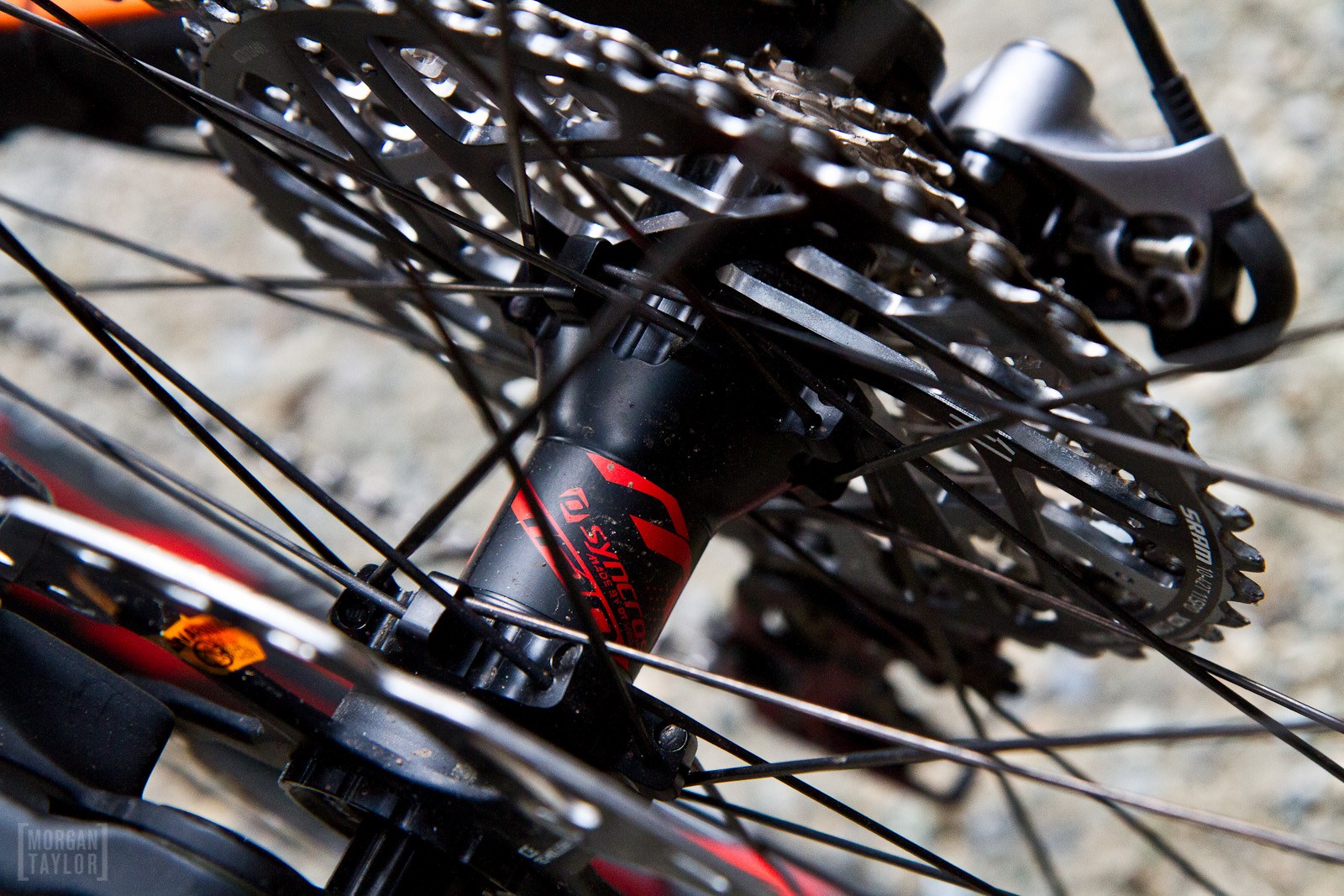 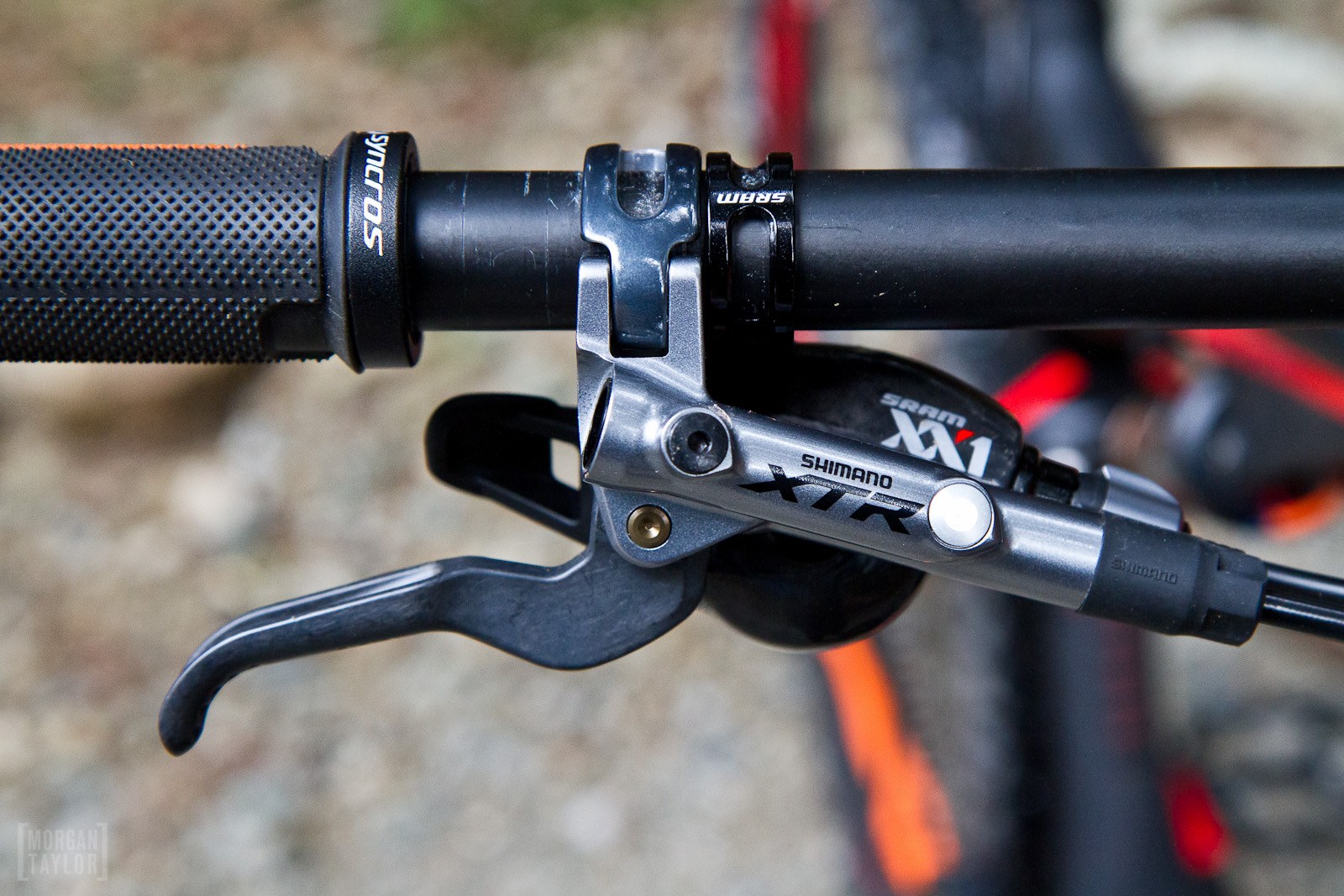 While both components work well it’s annoying on a bike of this pedigree to have excess bar clamps. Other riders in our cabal (alas we have no wrecking crew) appreciated the mix of XTR and XX1. 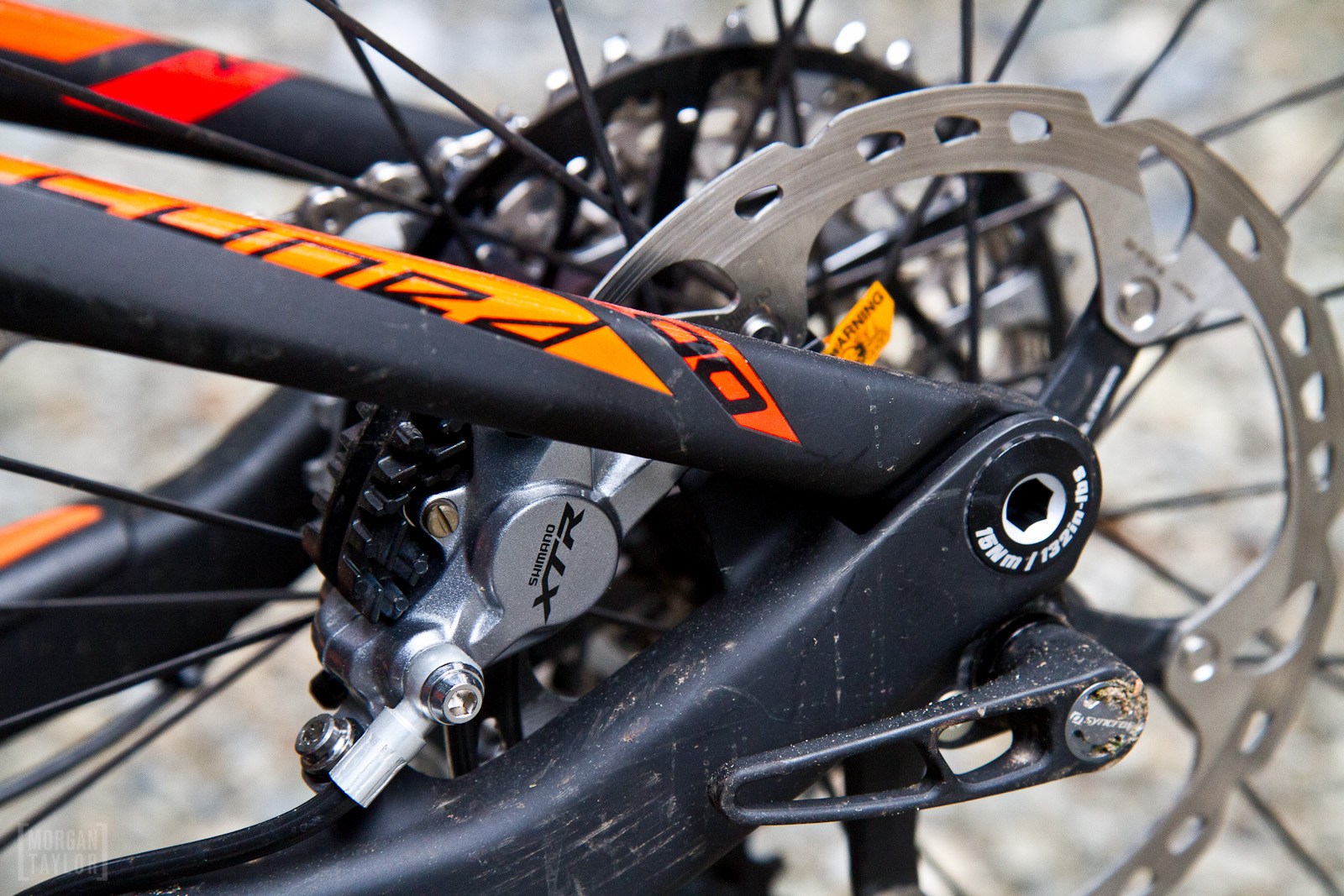 Many details contribute to the svelte appearance and lack of mass. An integrated post-style brake mount requires no adapter and it also positions the caliper inboard for protection. Despite this there is plenty of chainstay clearance for your heels. 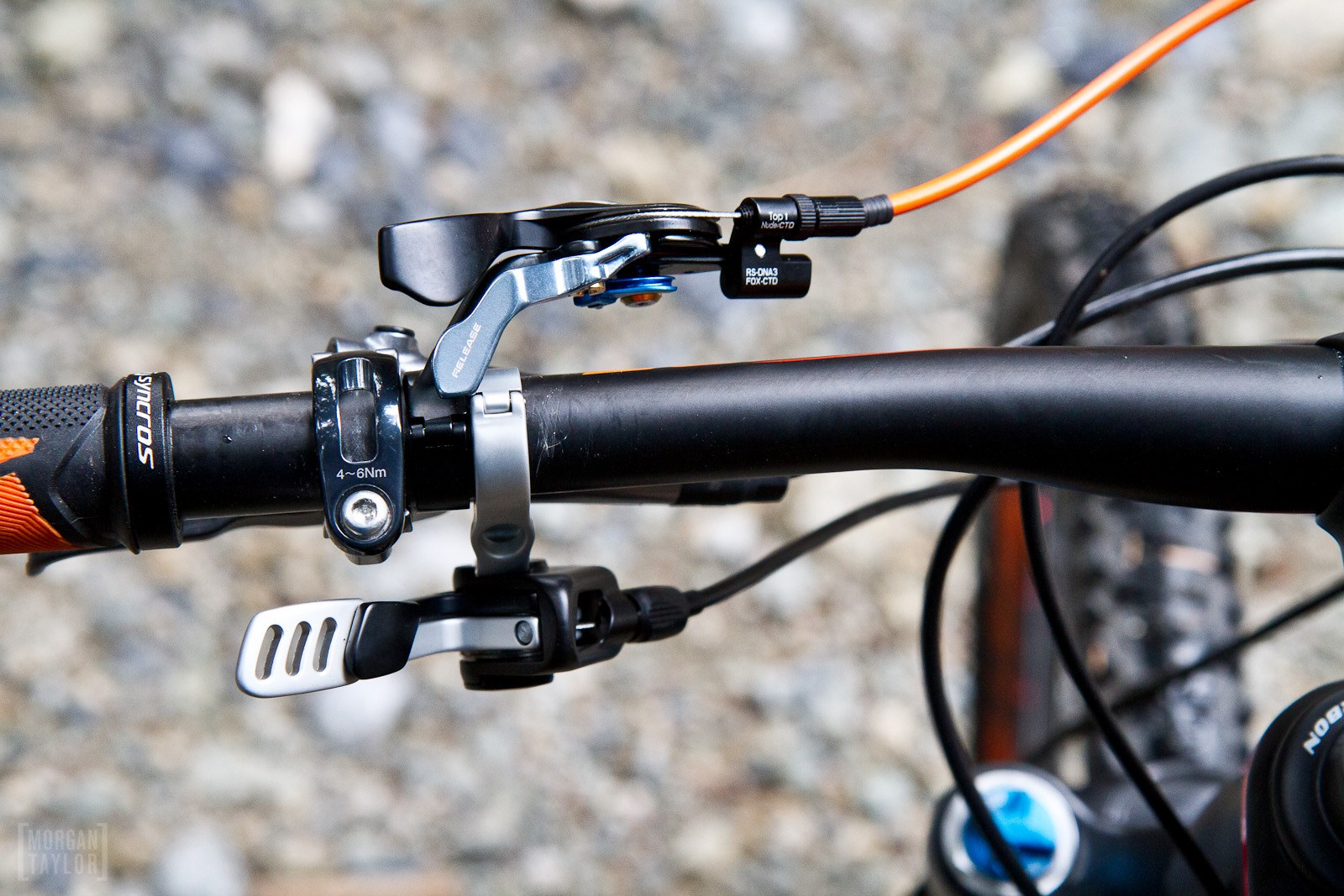 I am currently running a Fox Doss post which explains all the leverage above. Up top you can see the Twinloc remote (black clicks forward to engage and pewter to release) That and Scott’s decision to mate XTR with XX1. The bike is plumbed for a Rock Shox Stealth Reverb. We’ll be installing one shortly. If Scott had gone with Avid XO Trail brakes (with which I have had great success) the number of bar clamps could have been reduced from 5 to 3 using a Reverb and Avid brakes. 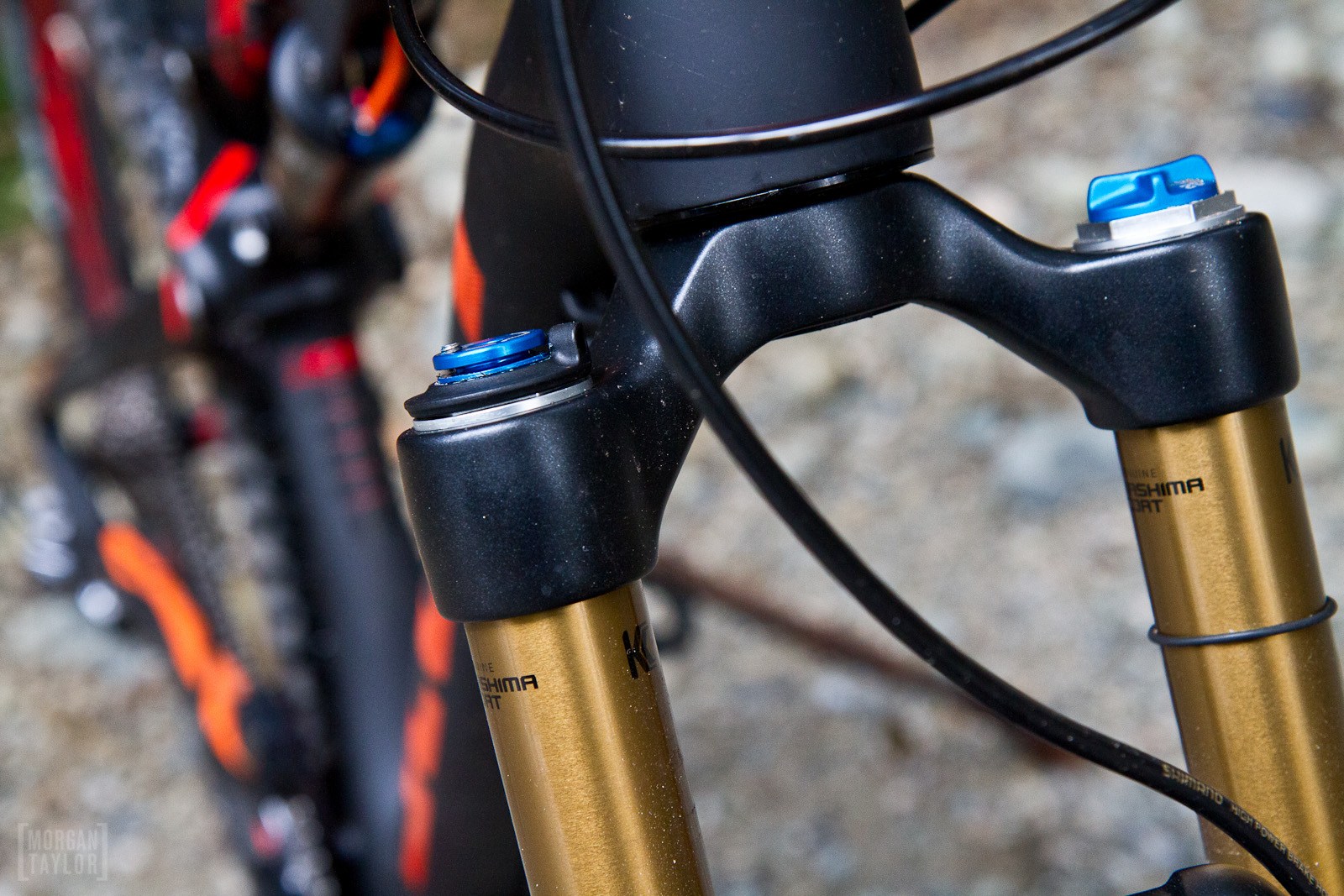 Few of the world’s mountain bike journalists appreciate the Fox 32 fork on anything bigger than an XC bike, but thus far I haven’t felt the need to complain. This one is boosted to 150mm, 10mm more than you can buy in the aftermarket. 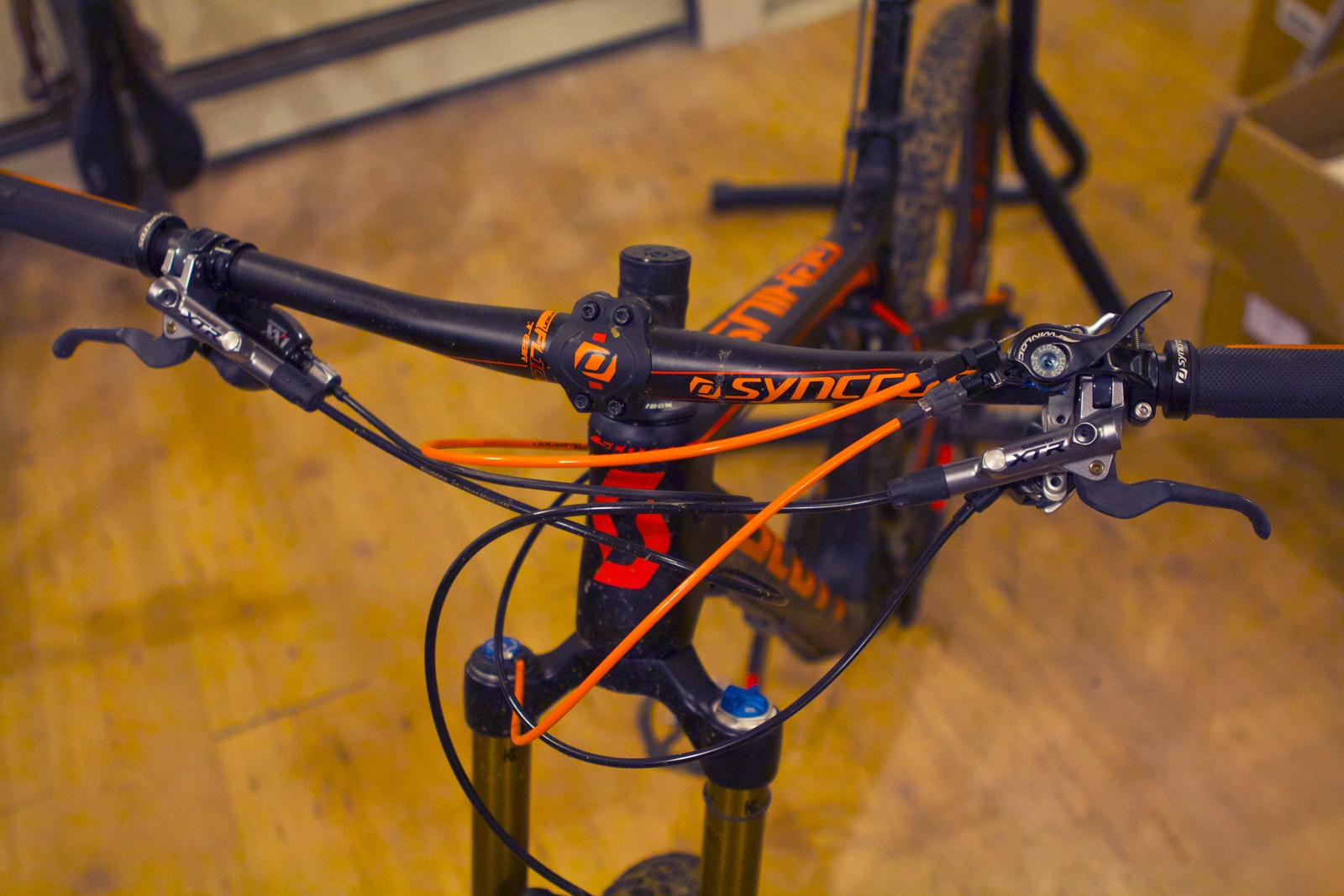 Here’s the Twinloc lever in its intended and current state, controlling both front and rear dampers. 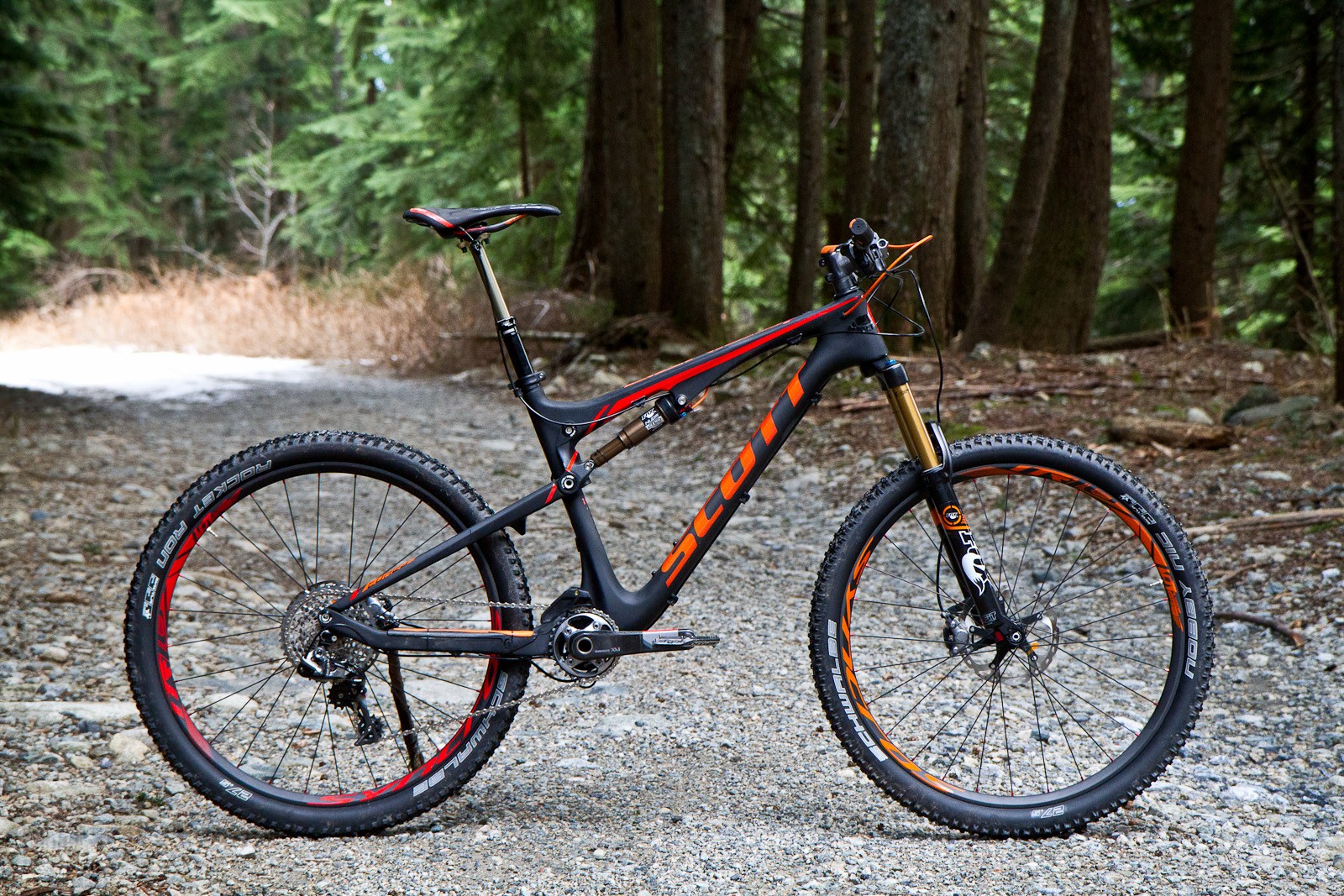 This bike is clean. More than once I’ve had to wipe drool off the top tube after the bike was pawed by other riders. The lines have been universally admired and I have to agree – this is one fine looking bicycle. After hearing moans and complaints about certain Schwalbe tires I was nervous about the Knobby Nic front and Rocket Ron rear combo. Despite this my first two rides in the dry went smoothly. I did notice the rear skip over roots a couple of times unexpectedly and the side knobs didn’t give me much confidence when the bike was leaned over. Ride three was in the wet and I had a couple slips up front but my chief complaint was a lack of braking grip in the rear. I plan to swap the tires soon now that the monsoons have arrived but for showroom tires I found the Schwalbes adequate.

The US MSRP is $7599. No word on pricing or other jurisdictions yet. The Genius entry point is $4099 with an alloy frame and a mix of XT/SLX componentry.

And now I’ll put some serious time on the Genius. Stay tuned for a long term report.

Now that’s an object of desire… clean and smooth, and the light weight to back it up!

Well that cuts it.

Not really unclebob. They appear similar but there is a big difference in the suspension configuration. The Rocky pivots on the chainstay (similar to Horst Link) but the Scott's pivot is on the seatstay, making it essentially a single pivot.

I don't mean to be a hater. Or suggest anything untoward with bike manufacturers. Maybe I am pointing out the obvious but is that not an Rocky Mountain Altitude in Scott's Clothing. Just sayin'

An update on the tires - scary on Squamish rock. Looking forward to some burlier rubber.

I can't find a price anywhere. It's possible I don't actually want to know though.