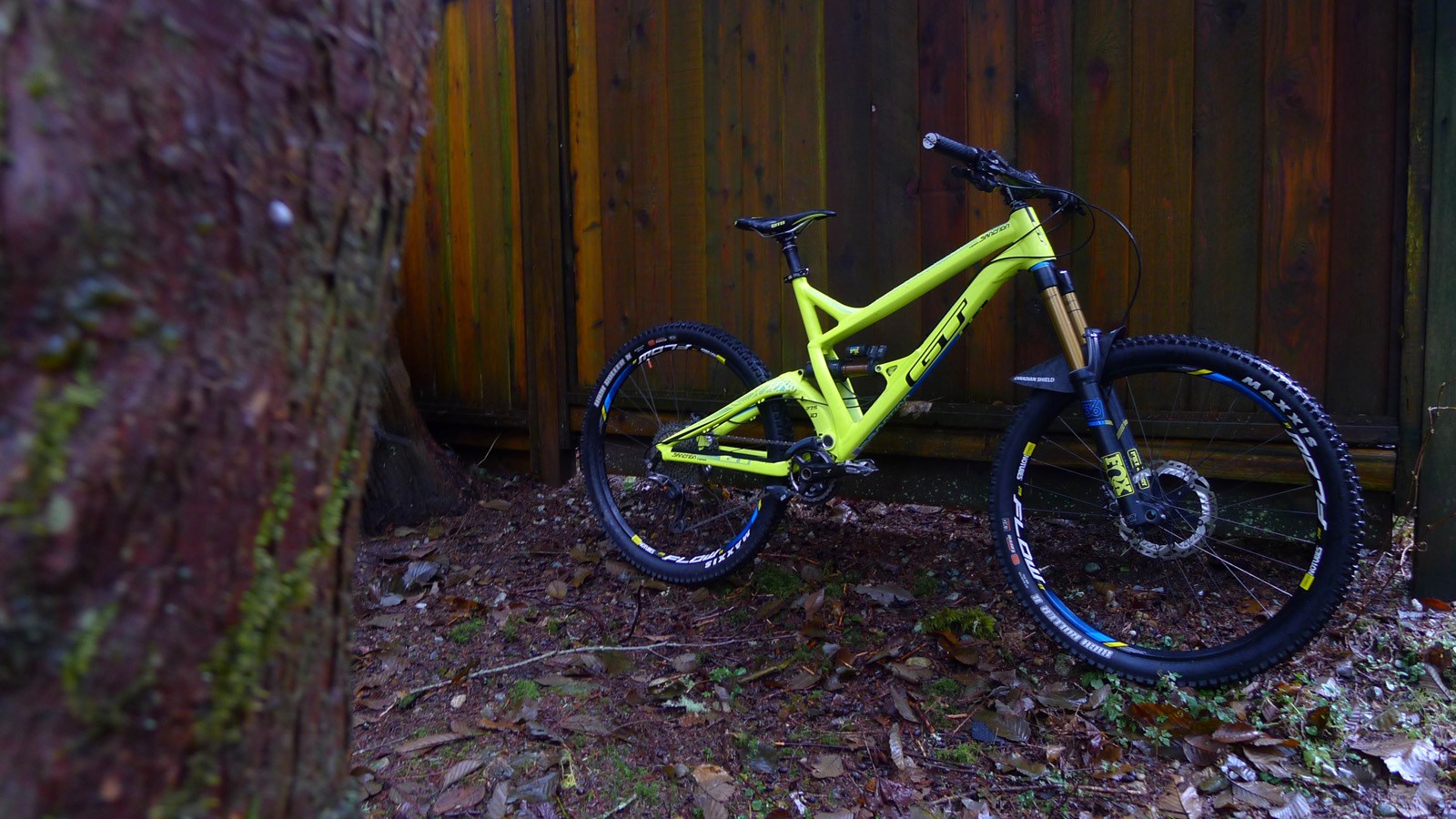 Don’t leave home without a pair of sunglasses. I personally love the bright colour.

The frame uses GT’s Independent Drive System. I took a dig around on GT’s website, and actually couldn’t find much info on what the Independent Drive System is supposed to do. I was surprised GT wasn’t aggressively marketing the unique suspension system. I went in search of answers. Based on some older videos, and my own paraphrasing the Independent Drive System essentially allows GT to run a higher than normal main pivot, but uses a floating bottom bracket arrangement to reduce the pedal feedback you would have otherwise got with a fixed bottom bracket. A higher main pivot is a good thing as it creates a more rearward axle path, which improves the suspension bump absorption. Check out the difference between the main pivot location of the GT versus other single pivot bikes like the Trek Slash, Kona Process 153, Scott Genius or Evil Insurgent. 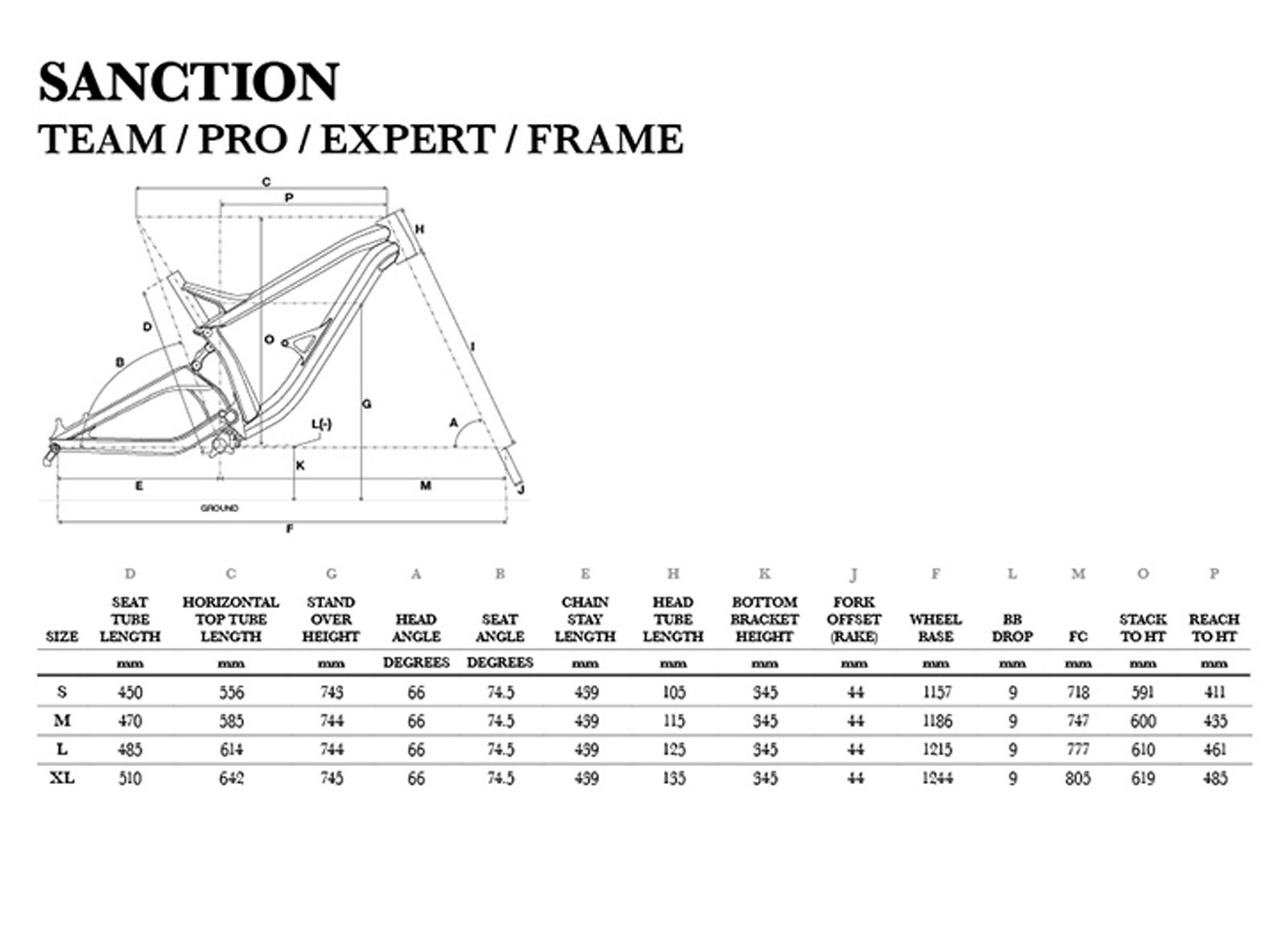 The GT Sanction revolves around 160 mm of rear travel which seems appropriate for an aggressive trail bike. The GT Sanction uses fairly modern geometry that is similar to many of the bikes in this class. See the chart above. 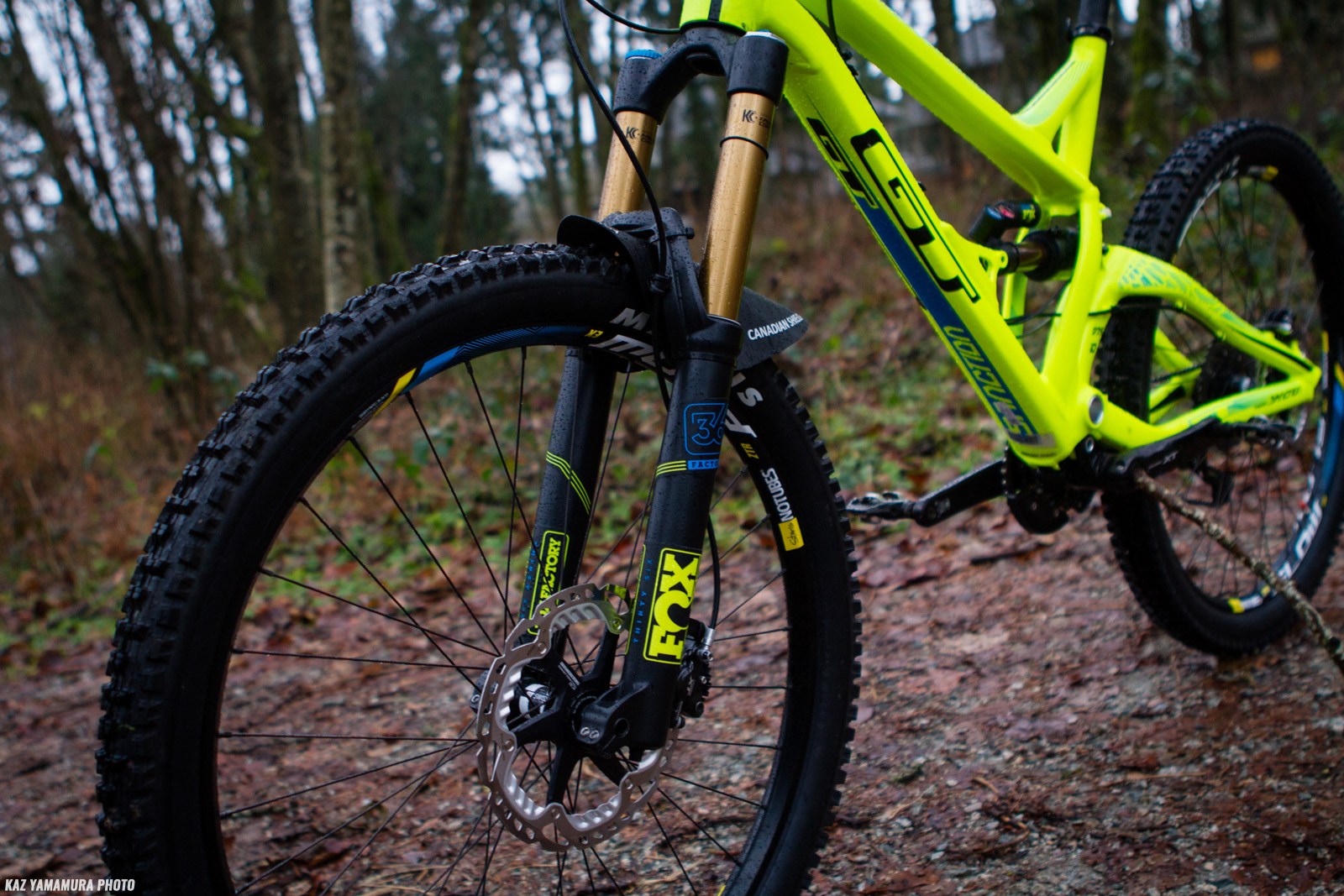 Arguably the most important component on the bike is the fork. Forking duties are handled by a Fox 36 Float RC2 FIT with a 15 mm axle. 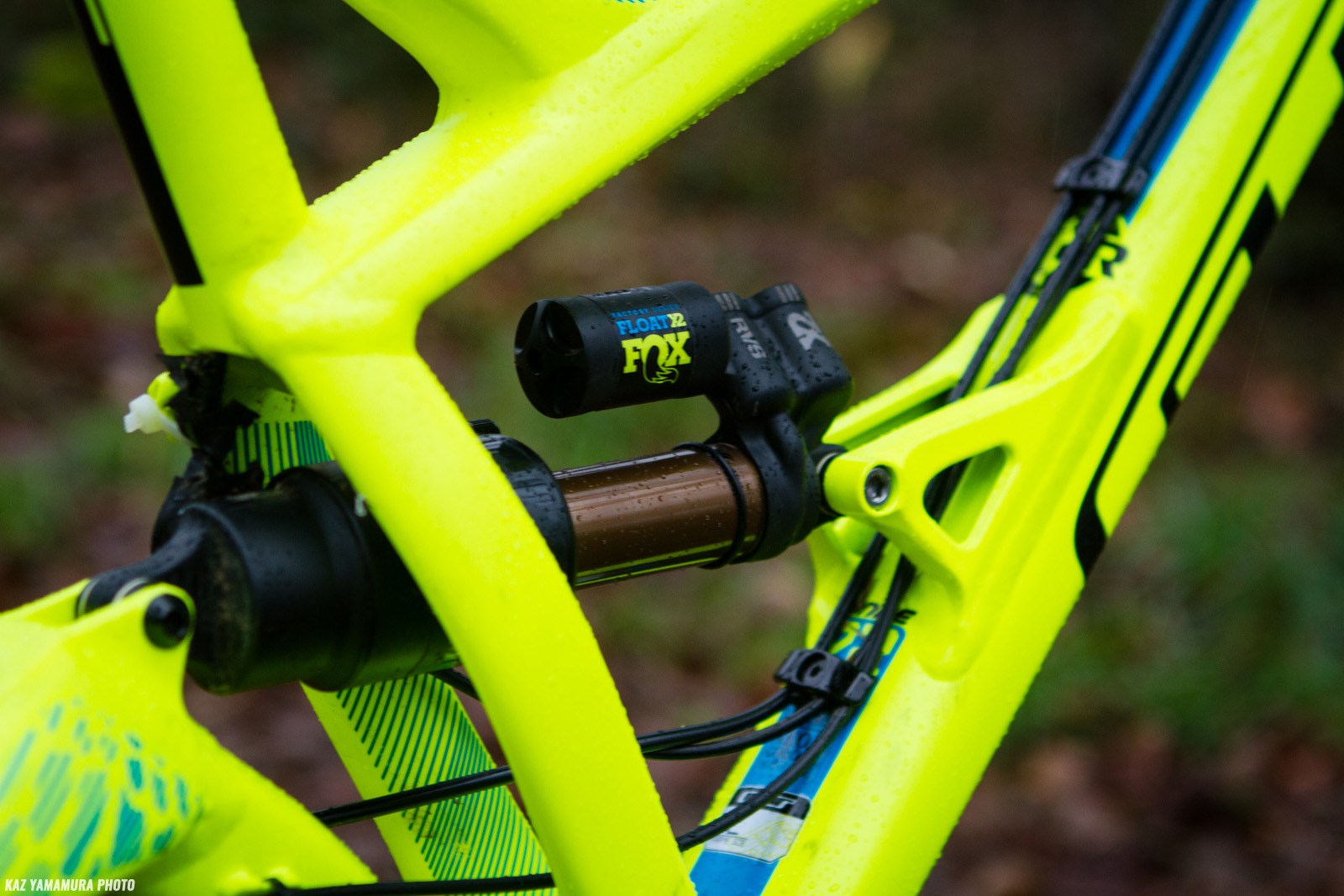 Holding up the back end is a Fox Float X2. Between the fork and the shock there are many damping adjustments to be made. 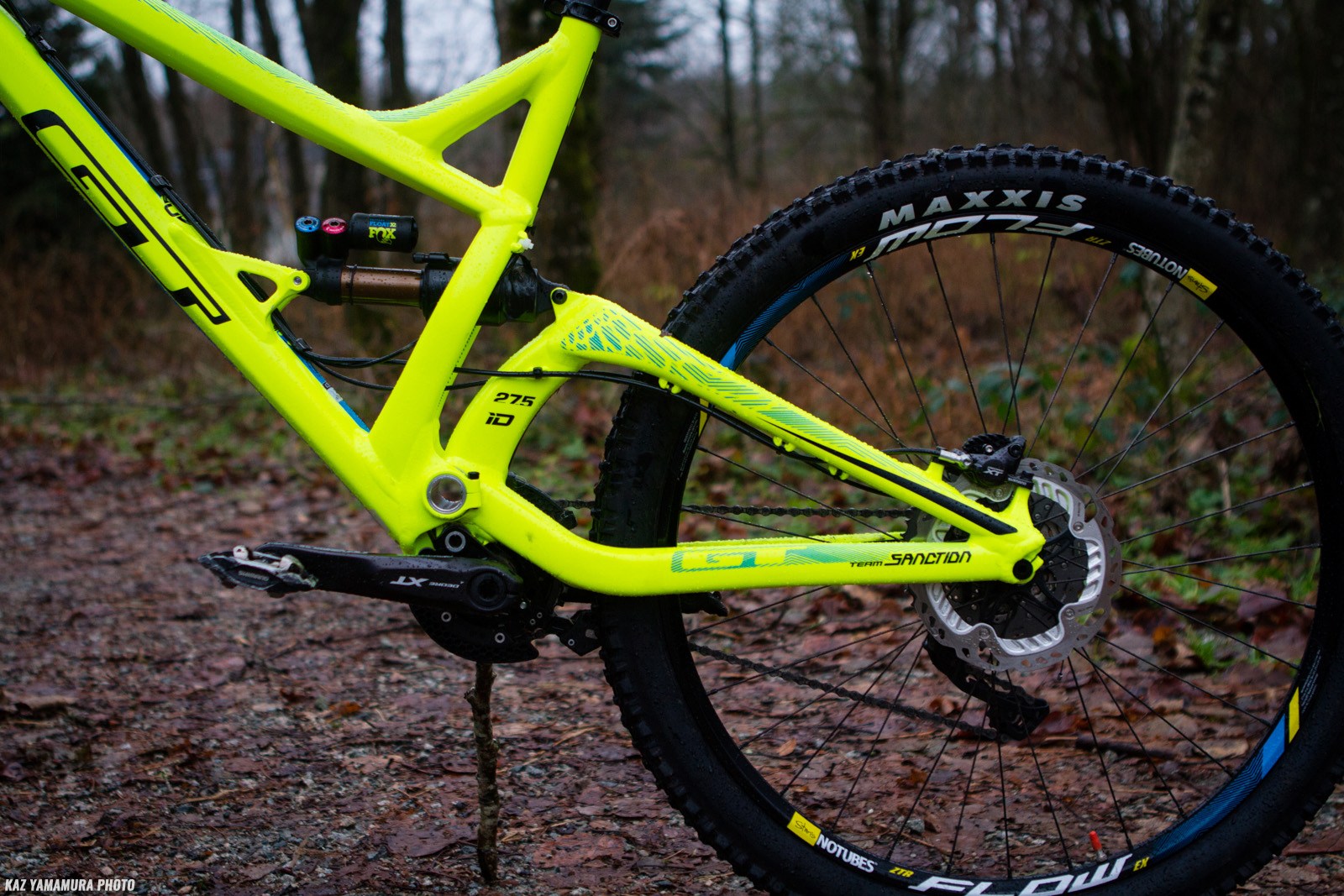 Wheels are heavy duty spec with Stan’s Flow EX rims on DT Swiss 350 hubs. Hard to go wrong with this combination; in my experience the Flow EX rims allow for easy tubeless setup, and take a beating. The DT Swiss has been a good workhorse hub in my experience, I’ve yet to have one fail on me. 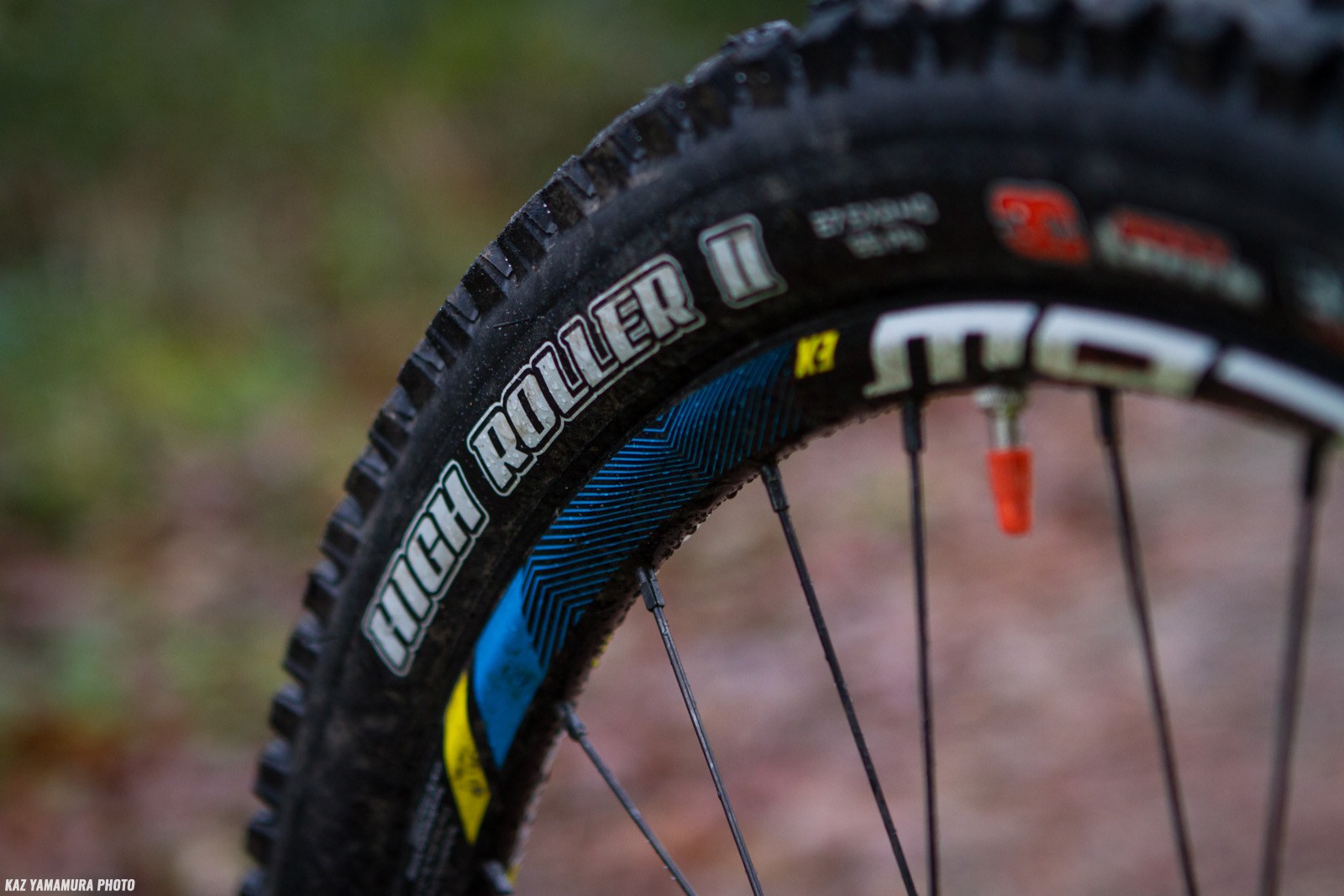 GT has picked the Maxxis High Roller 2 in 2.4” width for both the front and rear tires. These are a favourite of mine for around these parts at this time of year. 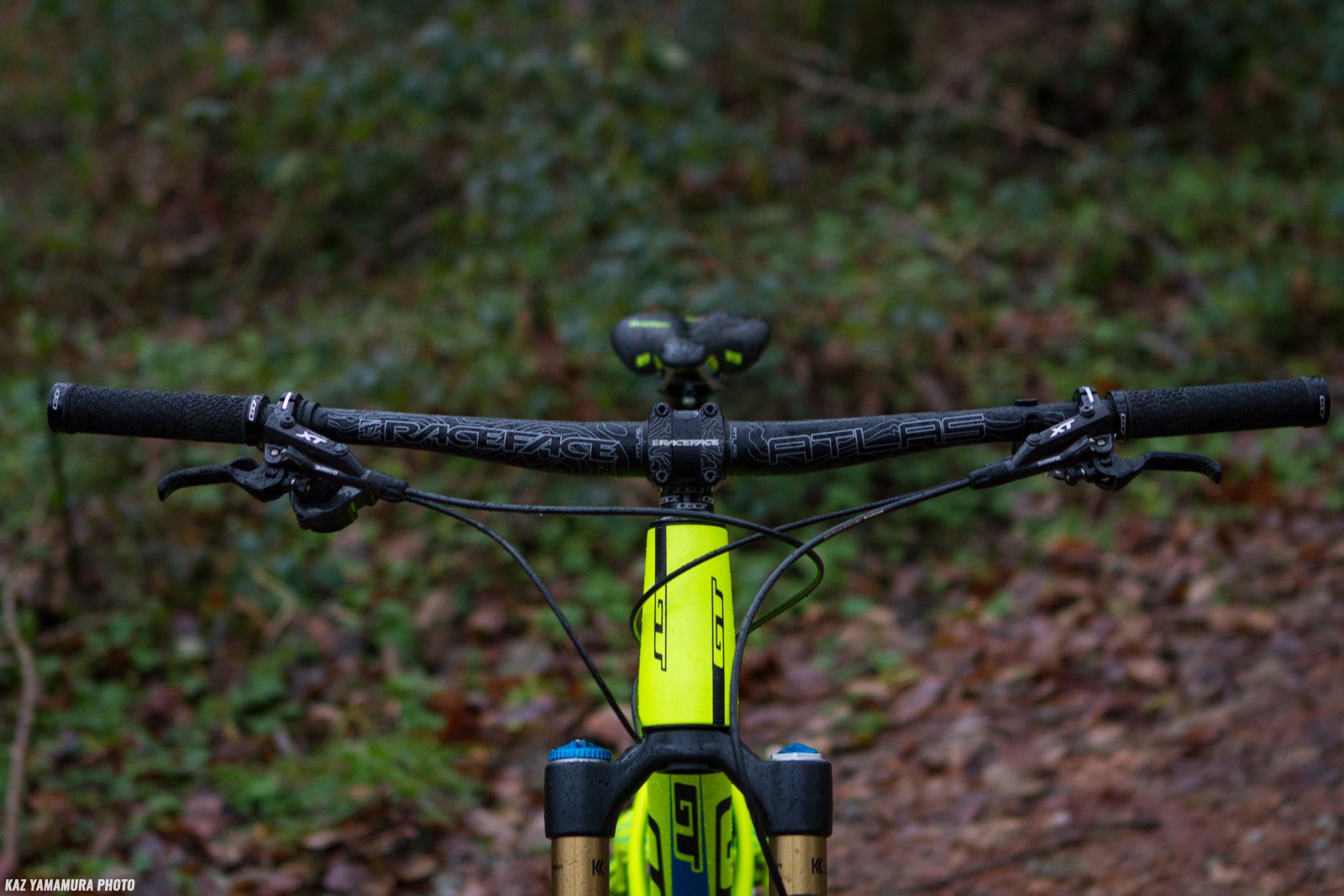 The cockpit on the GT Sanction Team is all business, but price conscious, with Race Face Atlas 35 bar and stem. 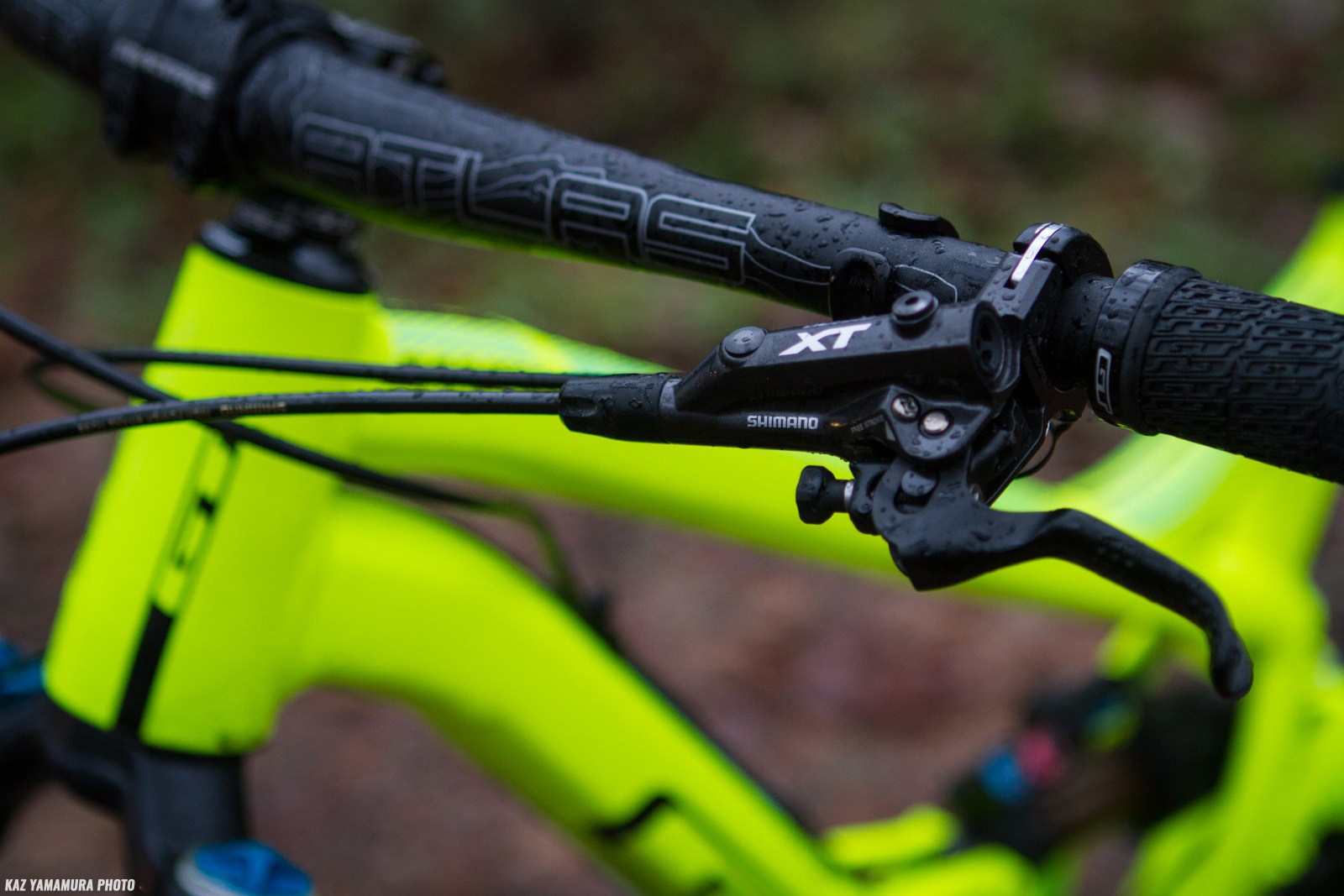 Shimano XTs keep your speed in check. The grips are branded as GT and are really comfortable. The brakes weren’t great out of the box, but I’m hoping a couple rides and bleed and I’ll get ‘em working well. 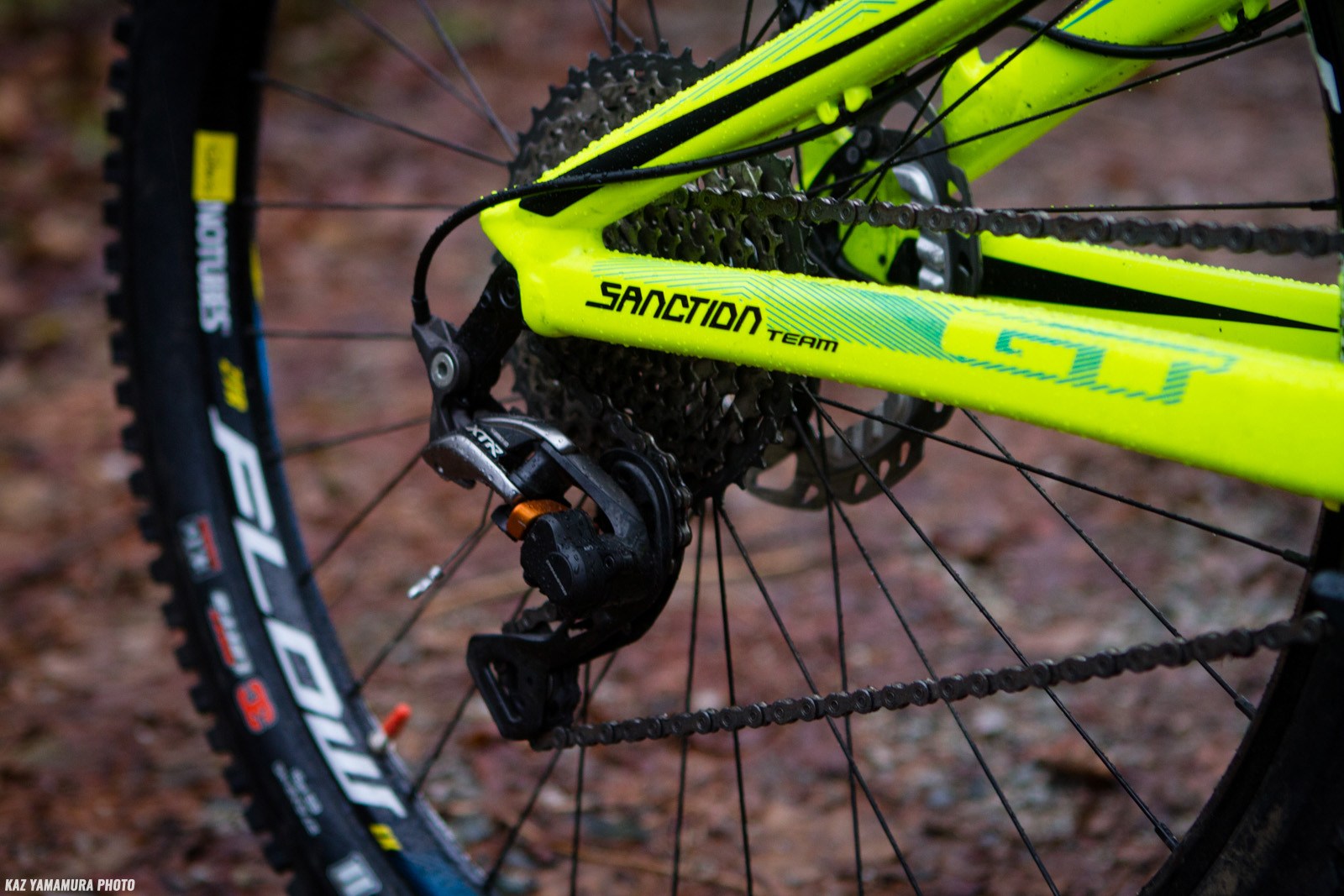 GT has chosen to run with the Shimano drivetrain unlike the majority of other enduro bikes out there at the moment. The Sanction Team sports an XT cassette with an 11-42 tooth spread. Shifting duties are handled by a Shimano XTR rear derailleur and an XT Shifter. 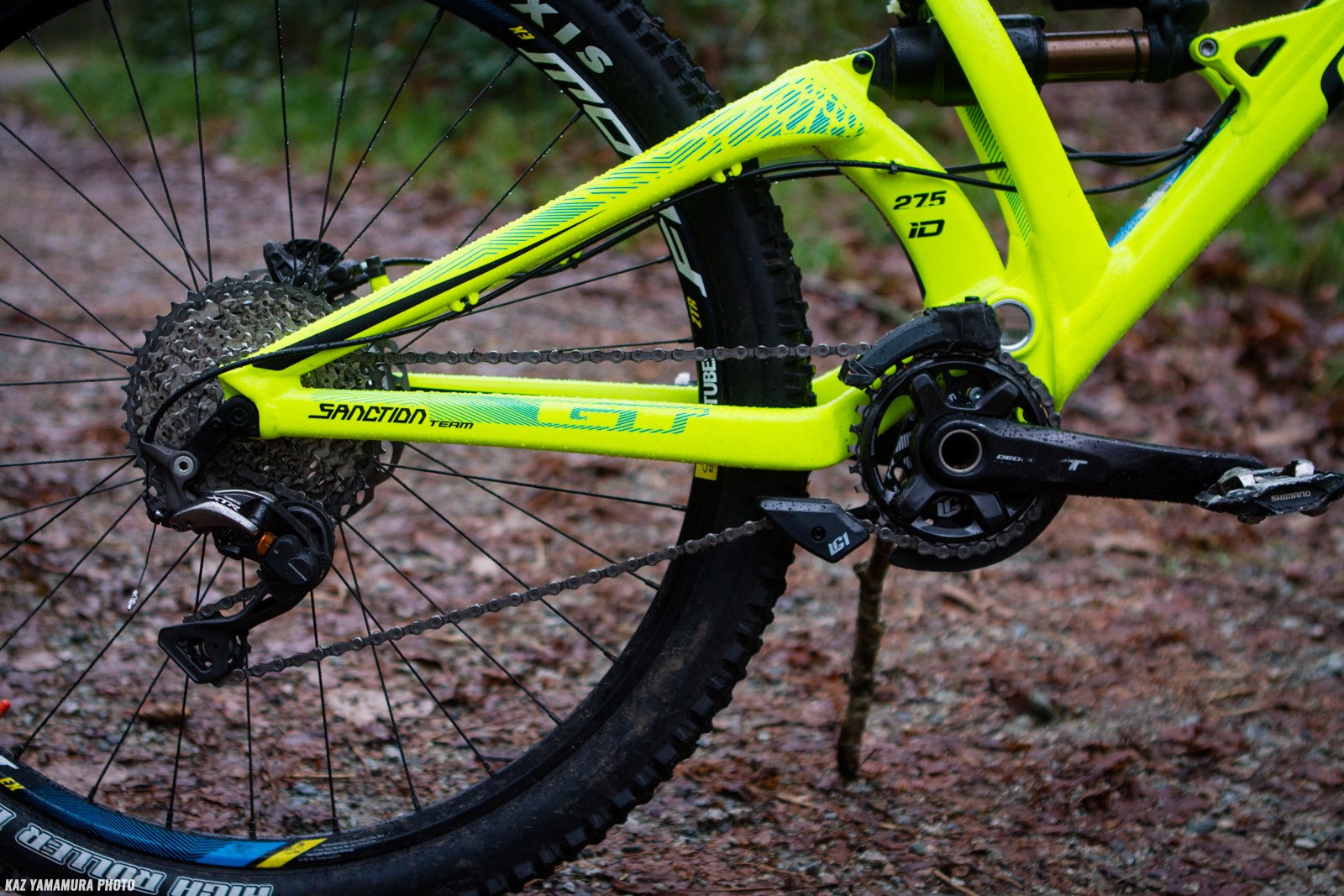 For the crank GT has chosen a durable workhorse in the Shimano XTs. An e13 LG1 guide keeps the chain on a 32 tooth chainring. The upper guide on the e13 broke near instantly, requiring some creative duct tape application by Kaz. We have a replacement improved unit on the way. 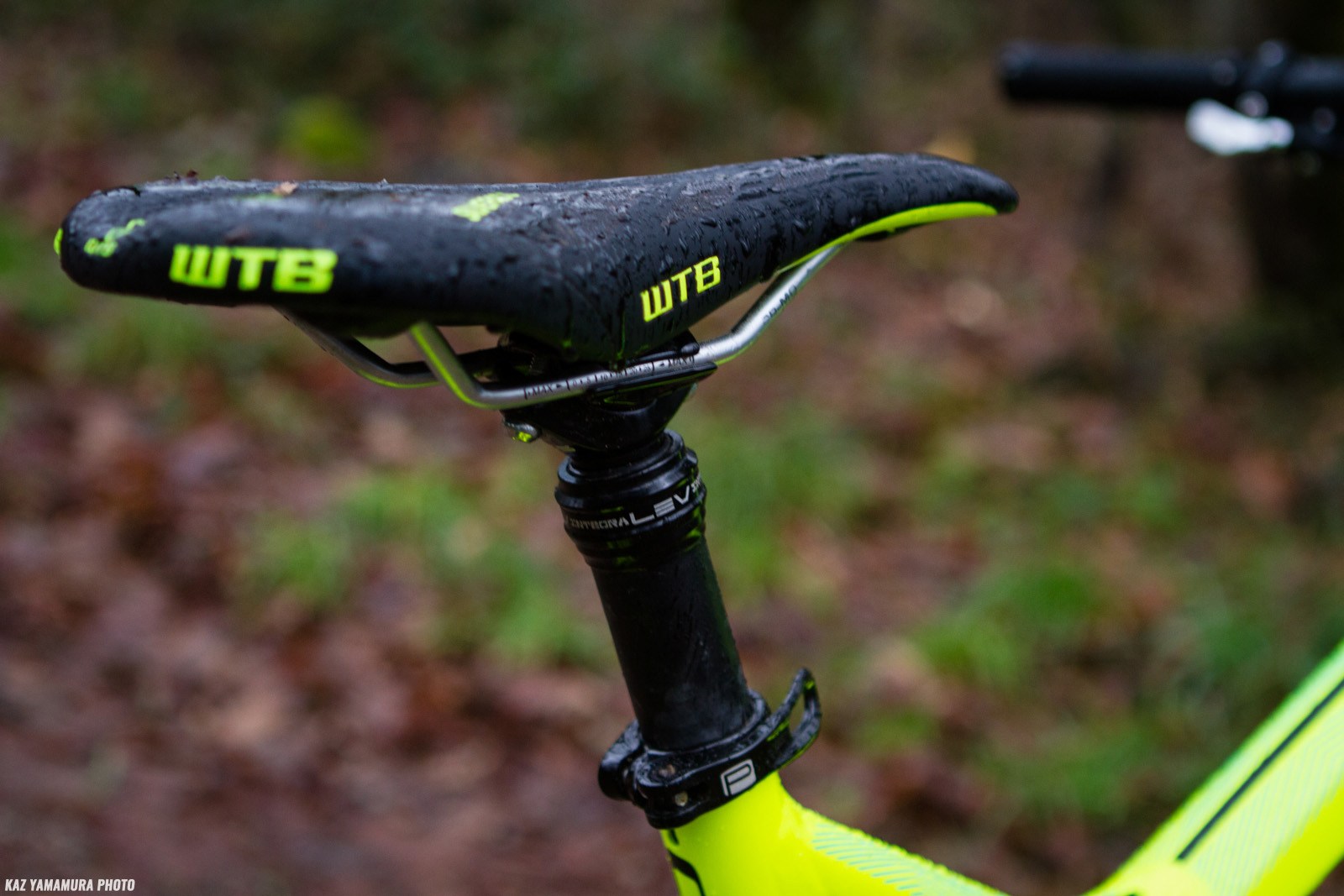 I think overall the build on the GT Sanction Team has been well thought out. Top dollar has been spent on the parts that really matter; the fork, the rear shock, and the wheels. Where performance gains are marginal GT has been smart in spec’ing durable, slightly heavier, but cheaper options. However the GT Sanction Team certainly isn’t cheap at almost $6,000. In comparison to other similarly priced 160 mm bikes on the market the GT Sanction Team has an apparent lack of carbon fibre, seemingly replaced by the top shelf dampers. I’m very interested to see if the slightly unusual build and component compromise GT has made is worth it. I have already spent some time on the GT Sanction Team, and will continue to put the GT through its paces here on the Wet Coast. I’ll report back in a couple weeks with a detailed ride report. Brap.

We’ve had some snow in recent weeks but it’s cleared up, and the trails on the shore are alive with riders braving the worst El Nińo has to dish out. Stay tuned for Tim’s review of the GT Sanction Team in a month or two.

i see Knolly has joined the longer is better club with the new 16′ Delirium. claimed to be a park/freeride bike that pedals well i wonder if this will find it's way into the enduro race scene. perhaps pedals well is overstated, who knows. interestingly about this Sanction is that the geo specs are very 'normal' hardcore AM bike, but the visuals are nearly DH in design.

Really interested in the ride review (short and long) for this bike. Also curious to see how this would stack up against the Nomad/etc.

i remember when steve jones interviewed dan atherton 2.5 years ago, he was drooling over the numbers on this thing… now its just another long, low and slack enduro bike, ho hum. looks like a ripper tho, can't think of a better person at nsmb to give it some grief; have fun tim!

It's the grandaddy of long, though. Right at the limit, perhaps (we'll ask again in a year!).

are you talking wheelbase, or reach?

Ive been riding Gt form some time now and the pedal really well. Zero chain growth over bumps lets just keep pedalling without any chain feedback. Dan Atherton and GT designed this bike together over three years ago so was ahead of the long low curve as I understand it. A ripper indeed

Thanks boom, I'll be riding this thing like a rented mule.

Pete; I don't think we need to wait a year! I like the size Large for my 6′ tall, feels real comfy like. GT was early to the long, low, slack trail bike party, but the geo on the GT now fits in close with most of the other "enduro" bikes, particularly the Giant Reign. The strange bit is that by the numbers the reach should be a touch longer than my personal bike, but it somehow feels shorter. I'll have to do some measuring and find out why it feels that way.

Even on such a considered build they spec the gears showroom style. XTR shifter / XT derailleur will give the same or better shifts, and not make you cry when you put the derailleur into a rock.