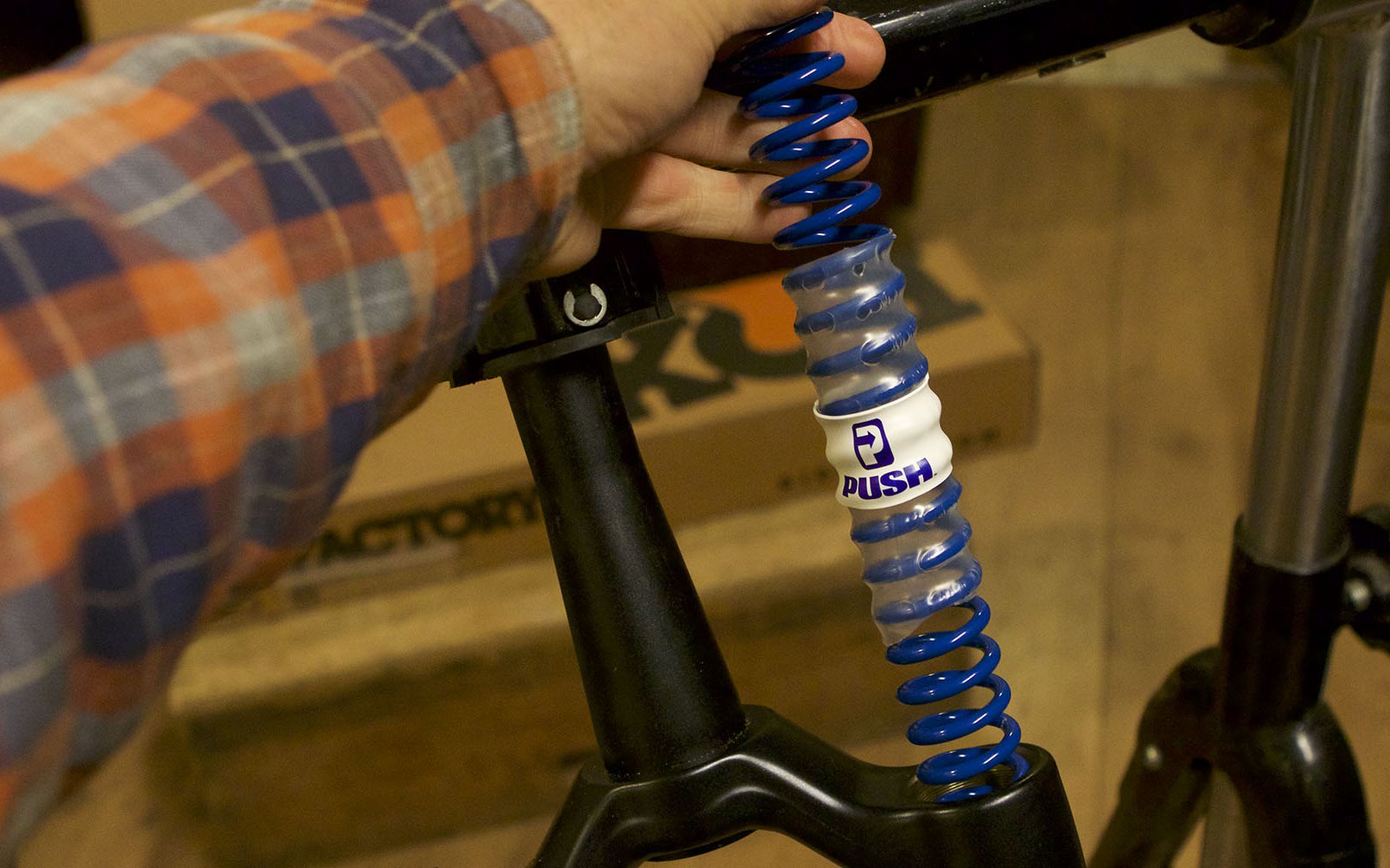 If you have been riding bikes for a good long time you undoubtedly have fond memories of coil suspension forks that were plush. No just plush; abundantly plush, luxuriously plush, plush like your parents waterbed when they were away for the weekend. As recently as 2005, air forks and rear shocks were relatively rare, particularly for longer travel bikes. Because actual springs are much more linear* than air springs you can have a consistent feel right through the travel, assuming you get the right spring weight. Stiction can also be kept to a minimum because rather than relatively tight seals to prevent air from escaping, coil spring forks generally only require dust wipers to prevent contaminants from entering the system. Less maintenance should generally be required and springs last a good long time.

*If you think coil springs are entirely linear, try and squish one that is half compressed 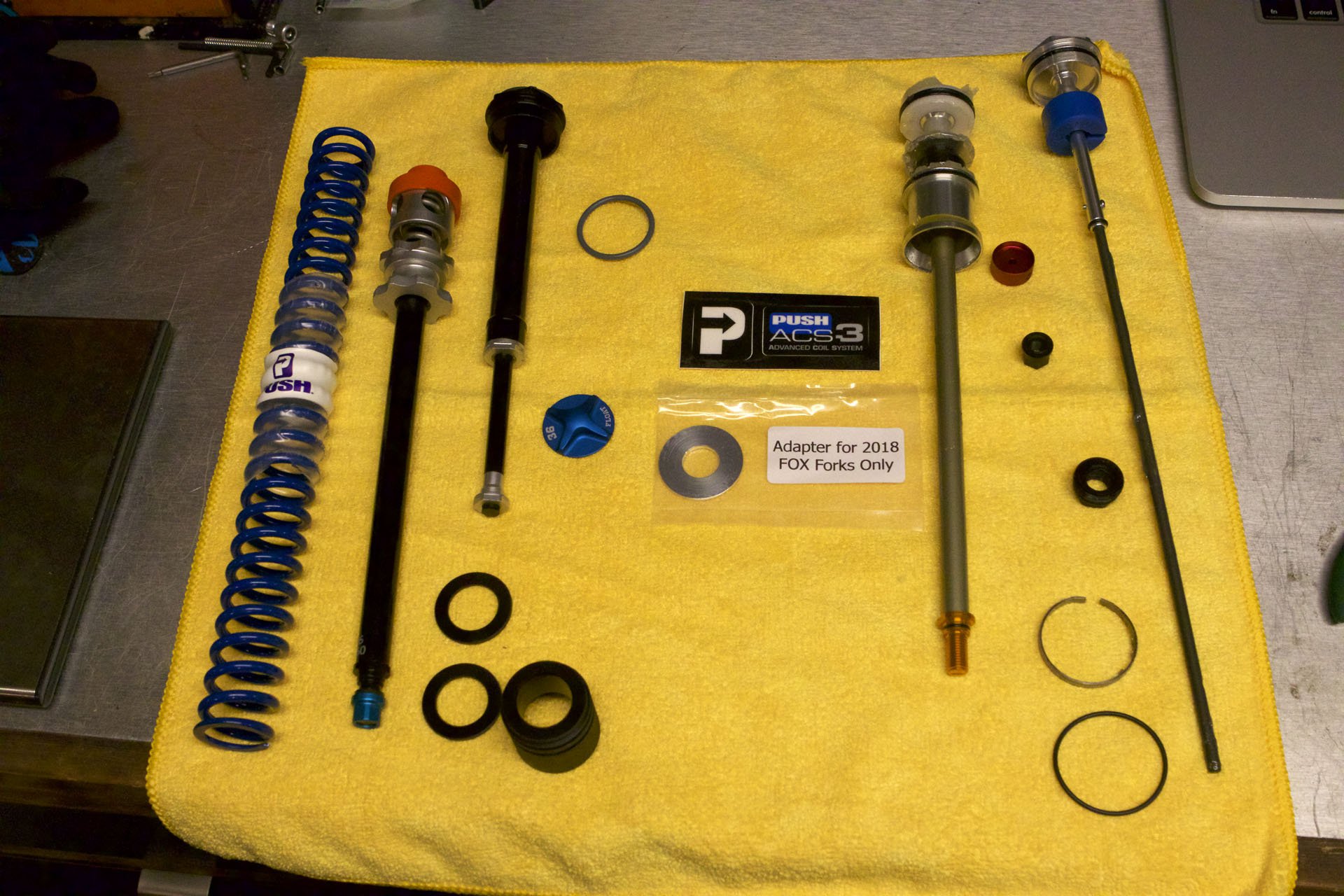 The original components sit to the right of the 2018 adapter. They aren't used again with the exception of the red rebound dial.

So there is much to love about coil-sprung suspension components, but as with all things there are downsides. Unsurprisingly, coils are heavier than air. You also need to nail the spring rate when you purchase because coils are also more expensive than air. Beyond that a bonus about air springs is that they are by their nature progressive, meaning in a perfect world your suspension will be supple off the top, supportive in the mid stroke and then will ramp up towards the end of the travel. That means one of the challenges of a coil is recreating those three travel stages with a more linear spring. Of course it's a little more complicated than that in the real world, but those are the broad strokes. 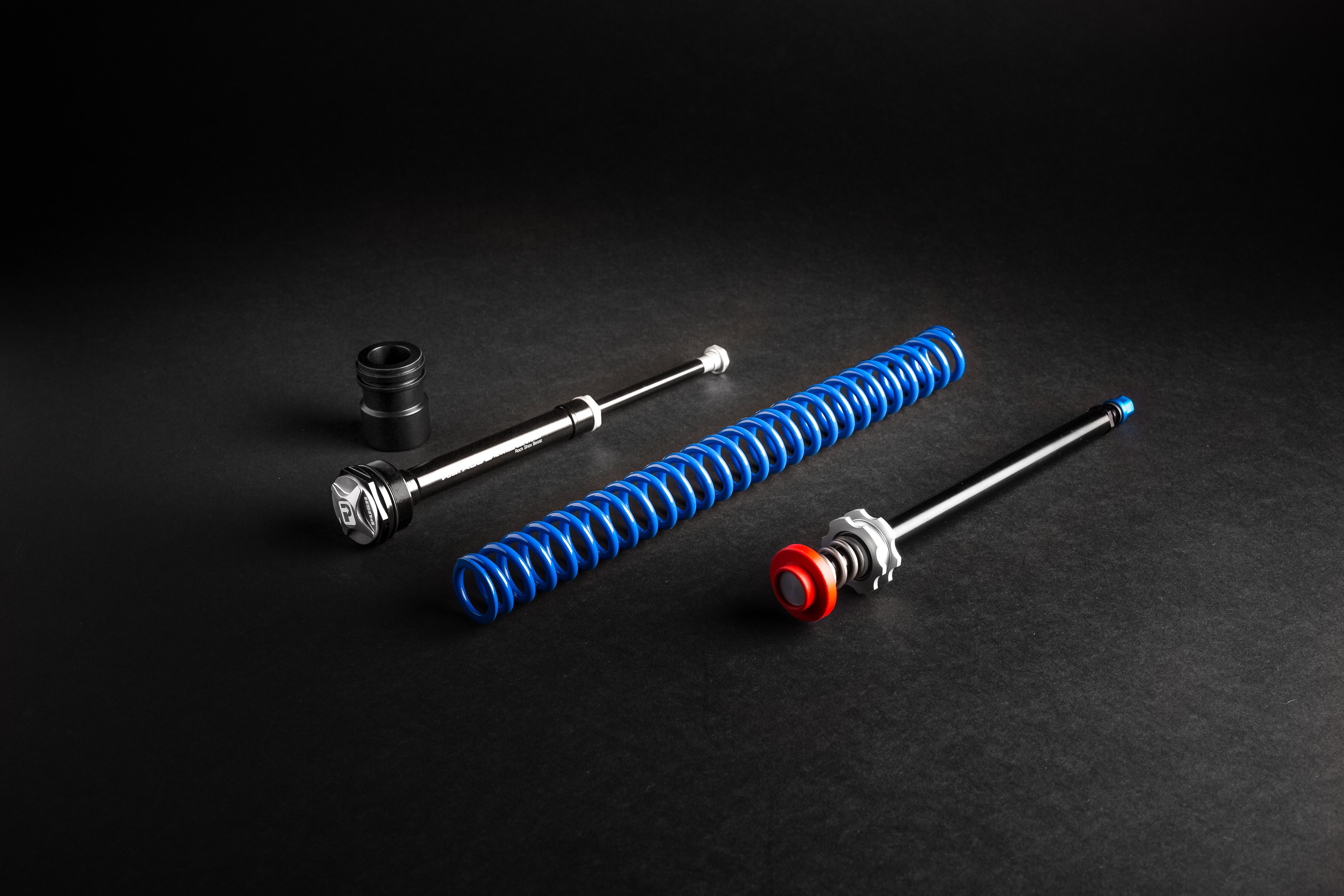 I covered the simple install in an earlier article, and I have been riding the fork on and off since that time. One early challenge was picking the correct spring. I weigh between 160 and 165 lbs, which is right where the gap between spring rates sits; 160 and lower is an orange spring for 160mm of travel. Considering I put 75 PSI in my Fox 36, which is recommended for 180 lb riders, it seemed to make sense to choose the blue spring. Off to the races.

Almost. Even without any air in the bottom out bumpstop, I was unable to get full travel. Drops to flat, hitting big rocks, generally flailing; nada. That I could live with but the fork was also harsh. There was no tuning out the excessive force that was reaching my hands. PUSH Industries was moving to a new location and it was around the holidays so the softer spring took some time to arrive. Once it did and I installed it I couldn't get it to compress without a knock. A slathering of grease from the SuspensionWerx crew did the trick and it turns out sometimes you just need to rotate the spring in the leg to find its silent spot.

Unfortunately the problem with the softer spring was a predictable lack of mid stroke support. I was diving into the travel. The bump stop doesn't initiate until well into the travel (the last third) so more air there won't improve ride height or prevent the fork from diving, but it will stop it from bottoming out like a hammer on a concrete floor. You can however add spacers to increase preload for reduced sag. 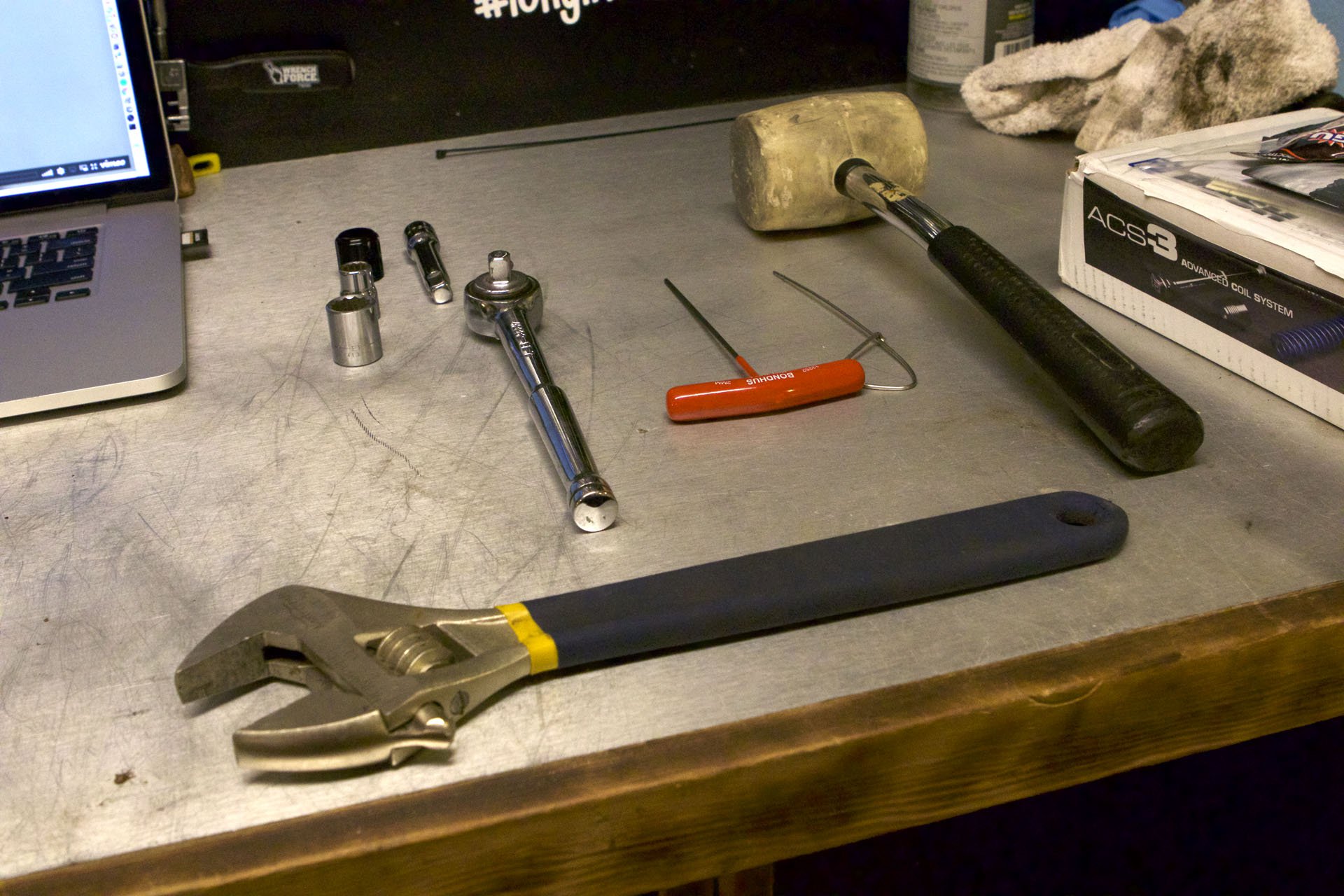 Tools required. Or at least the tools I required.

I went back to Suspensionwerx and they did some undisclosed shim stack work that had solved this issue for some other riders. It was better, and I was no longer bouncing off obstacles as much, but the harshness remained on repeated high intensity impacts. The nearest I got was when I closed the LSC down to 6 turns out from fully damped, and it was working really well on steeps with big hits because it rode high in the travel and dealt well large impacts. After months of trying to get the blue spring to work in every situation I decided to go back to the orange coil and crank the low speed compression even further, while adding a bit of air to the bump stop and speeding up rebound.

The fork I converted is a 2016 Factory with the FIT4 damper. That means there are three high speed compression settings, open, medium and firm, with 22 clicks of low speed compression in the open setting only. I had tried opening up the LSC from PUSH's recommendation of 12 clicks out from full damping without any success so I started to go the other way. At around 6 clicks things started to feel better. Much of the harshness was gone but the fork wasn't tracking as I had hoped yet. It felt chattery around rough corners compromising control. Finally I decided to go back to the orange spring and try a little of what worked with the heavier blue coil.

A confounding element of suspension tuning for me is that sometimes a symptom must be solved counter-intuitively. Early on in my suspension education, my solution to a harsh feeling from either end of the bike was to reduce pressure. It felt too 'hard' so I would make it softer. This often compounded the problem because it was already a little under-sprung. It also seemed to me that more rebound damping was unlikely solve my issue of the fork being over-sprung, but it helped there and even more so when the spring rate was a little low. It's possible that the RC2 version of this fork, with individually adjustable high and low speed circuits for both compression and rebound, would have been easier to decode considering my awkward positioning between two coils.

The chart that got me into trouble. I thought I was the more aggressive rider.

Hard won success always feels better, but I think even by absolute standards what was produced by my circuitous route to front end bliss is pretty remarkable. I took the LSC to 2 clicks out from full damping and sped up the rebound to 10 clicks out and that produced magic. My recollection of coil forks back in the day, like the 36 VAN or a number of Marzocchis, is likely skewed by lower standards, and those forks would likely feel like crap to me now, but the PUSH conversion arrived at that sweet spot in my memory. Everything feels a little sweeter from small bump performance to rapid fire high intensity impacts, all the way to big hits. I also found that I could switch the three position damper to medium for sustained steep trails to sit me higher in the travel, overriding the LSC while achieving similar performance.

Tracking through bony sections, and rough corners in particular, is remarkable. All this allows me to feel more composed and to get a little looser and more ragged, and that's nothing but fun. The fork has made the whole bike more lively and yet easier to control. I happily aim for big holes and hard compressions knowing I'll be able to smooth them out and likely even gain a little speed on the way out. Hand fatigue has been reduced and I'm pretty sure the conversion has even made me better looking. 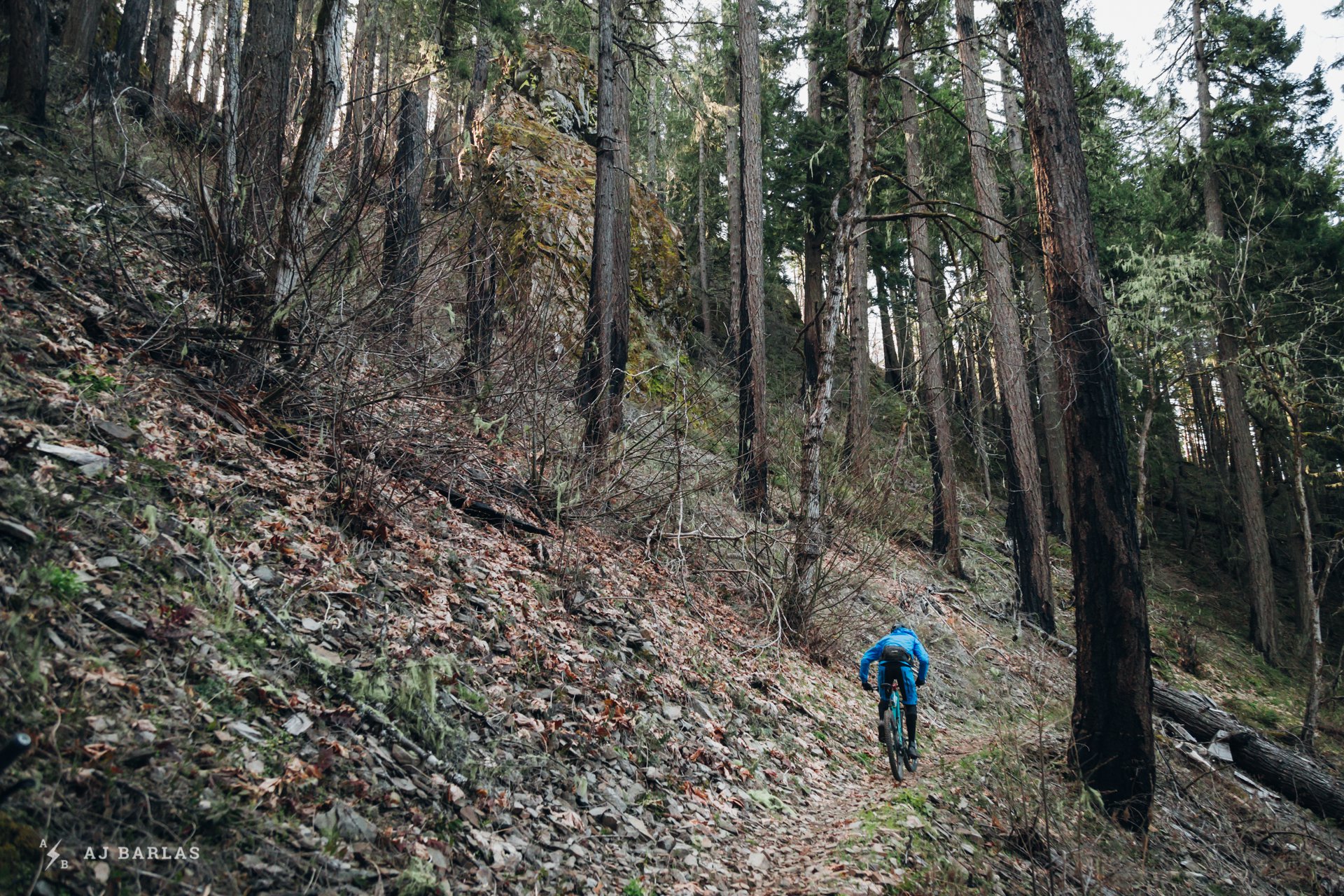 And finally I can ride off into the sunset. Photo - AJ Barlas

The ACS 3 Coil system is now available for Rock Shox Pike, Lyrik and Yari as well as the Fox 36. Remember that this conversion will void your warranty and that it's not reversible, unless you spring for a a new CSU. If have one of the aforementioned forks but you'd like the buttery responsive feel of a coil (and you have 389 USD burning a hole in your pocket) the PUSH ACS3 kit is likely the way forward.

In the end I've landed in an excellent spot; that feeling that your bike feels so good you can't wait for the next chance to saddle up. If you are coil-curious hit up PUSH Industries for more info.

Is the post purchase tuning and fiddling that you needed to get it working included with the cost of purchase?

If not, and you’re not a big shot internet media mogul ;) - what would that tuning have cost?

This review is the exact feelings I have had. I’m also 160-165 and went with the blue spring and it was harsh. Couldn’t get the bike to bottom, great midstroke and poppy but brutal everywhere else. Now I’m on the orange spring and I’m diving. It’s overall better but the rear is over powering the front. Going to try your settings. So what I understand is that you from full damping is 10 clicks out on Rebound and 2 clicks out on LSC with an orange spring. What do you have in your bump stop. I’m at 25 psi. I have been playing with this fork for the past 2 months. It seems we are both between spring rates.

Reading between the lines, it seems the coil conversion wasn't the element that made the forks great in the end, it was some custom tuning and ongoing damper tweaking - would you say with the damper tune and settings you ended up with, that the fork would feel any worse if you'd stuck with air?

Interestingly, after extensive tuning with a Shockwiz on my 2018 36 RC2, I ended up at HSC completed open and LSC at least 75% closed, which ties in with where you ended up on the damper side.

36 Van (with Kashima) is still the bench mark. Don't give up your true recollections because other people say you are old or want to sell you something. MRP makes coil forks.

Apologies for dragging this thread back up, question if I may: Cam, what psi were you running in the bottom out air spring for your test?