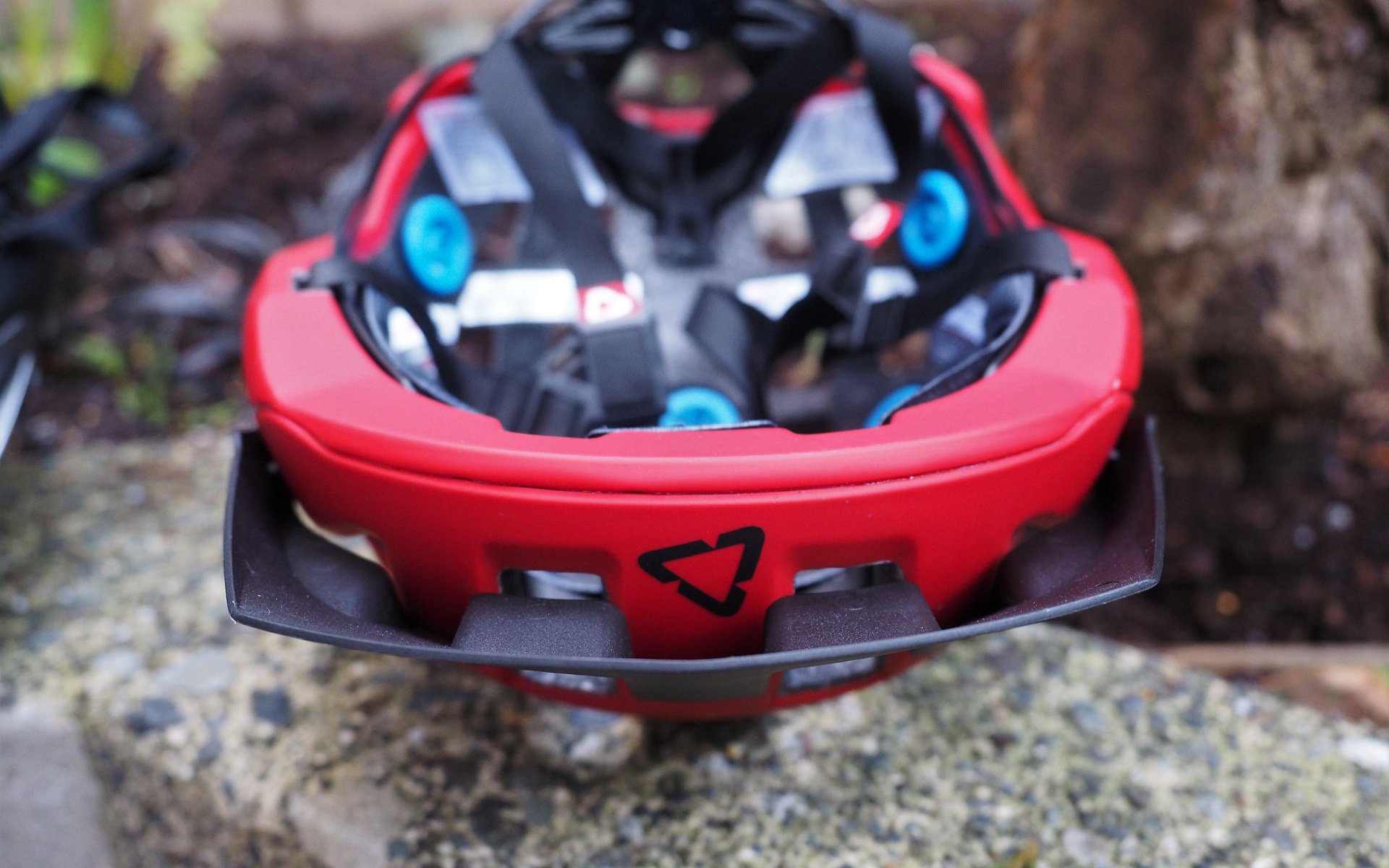 The Leatt DBX 2.0 helmet is a prime example of a company trying to bring their design philosophy to value-priced product without sacrificing safety or performance. At 100 USD | 150 CAD, the Leatt DBX 2.0 helmet isn't inexpensive but when you consider the premium safety brand has incorporated key safety features like the blue 3D molded energy absorbing 360° Turbines and lower density foam, it's clear this is a lot of helmet for the money.

Also carried over from higher end helmets is the washable liner, touted by Leatt for breathability and wicking properties. Most importantly, though certainly personal, the excellent fit trickles down unaltered. 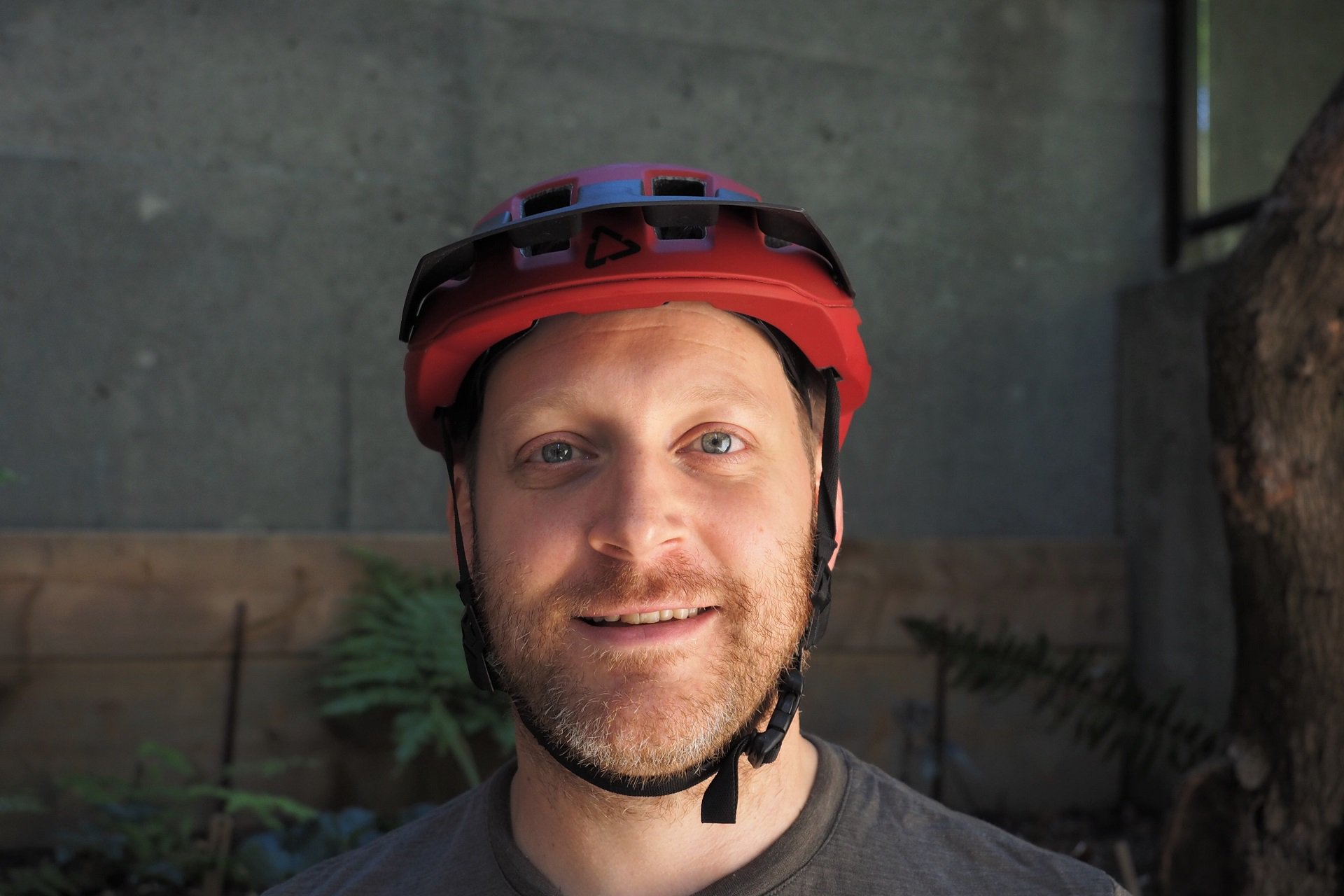 The visor is designed to breakaway easily to lessen rotational forces in a crash. 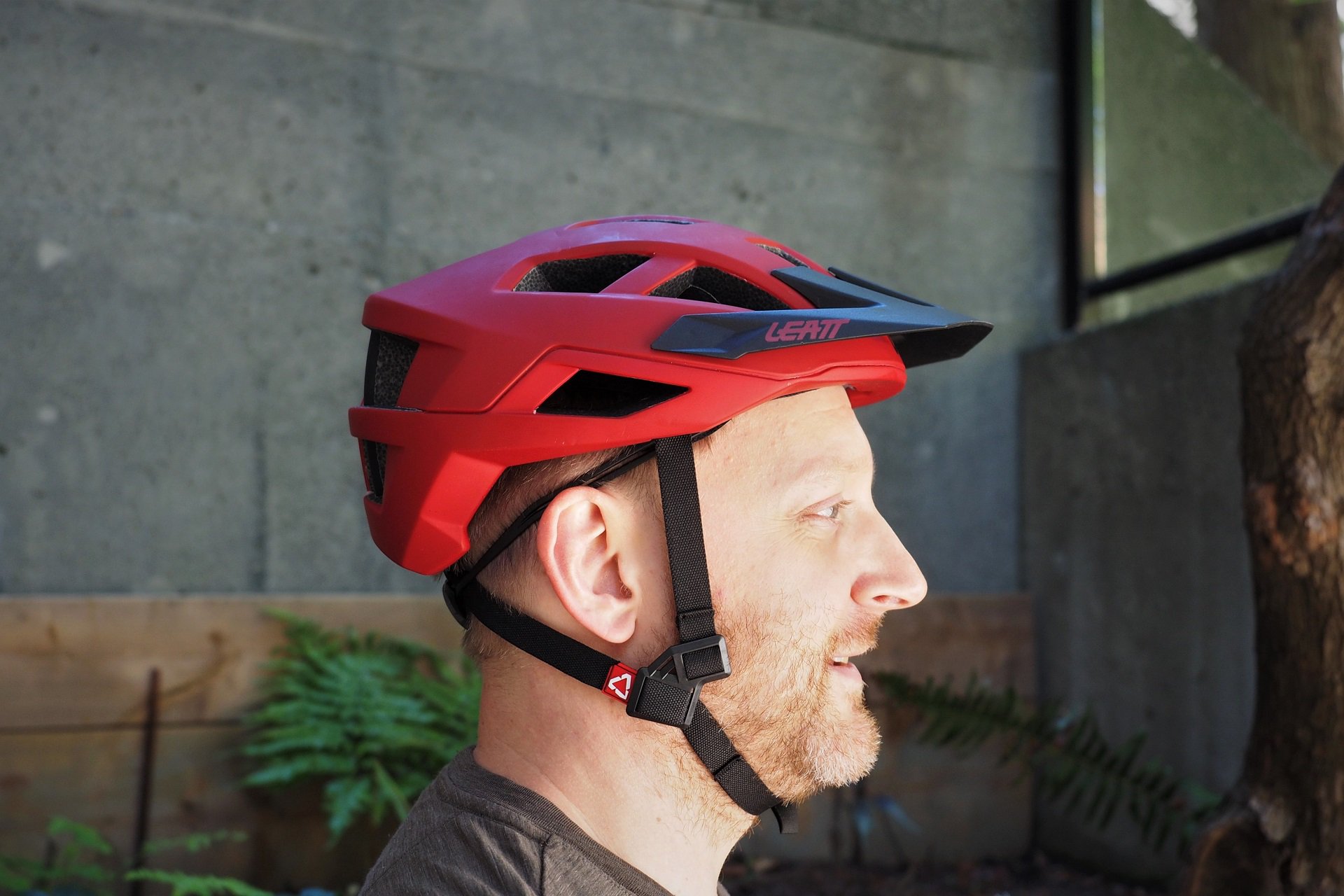 Passive venting is very good for a helmet with lower density foam. 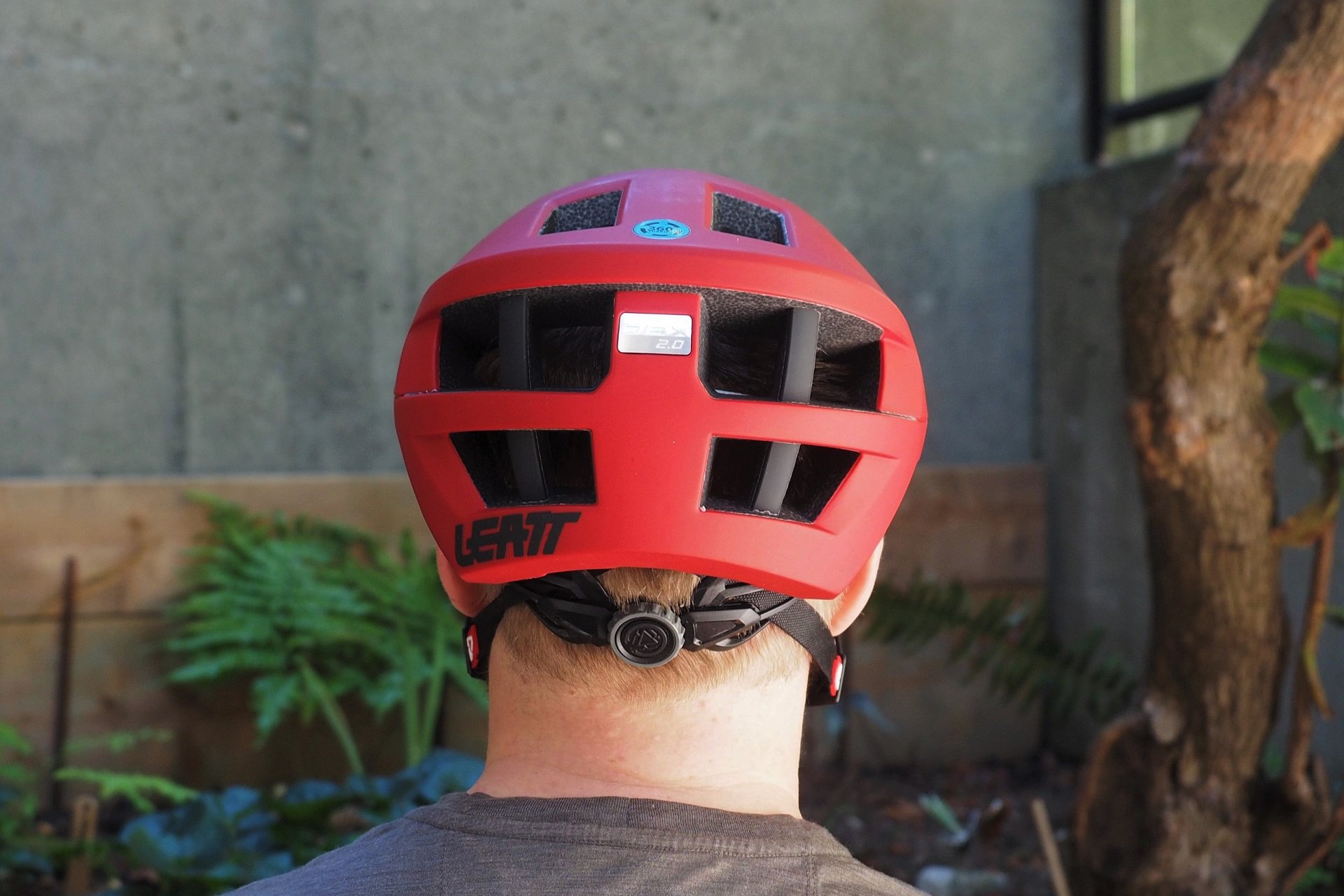 The retention system is comfortable, easy to use and 100% secure.

Much of that great fit comes from contact between my head and the 360° turbines, which Leatt claims reduce up to 30% of the head impact on concussion level forces and up to 40% of rotational acceleration to head and brain, and the liner. For 54 seconds of wicked gothic-drum-and-bass and graphic representation of how the 360° turbines are meant to reduce concussion level impacts and rotational acceleration check out Leatt's animation here.

Combined with the venting architecture, necessitated by running Brad Waldron-approved foam, this is not the most breathable helmet in the price range. I'm a believer in Brad's softer foam philosophy and I'm willing to trade exoskeleton-like venting for a lid that is more likely to sacrifice itself to save my head in a crash.

The basic idea behind Leatt's DBX 2.0 is simple; deliver the key features of the impressive DBX 3.0 at a lower price. The DBX 3.0 wins on looks every day of the week but with the venting being the same in practice and the protection being the same in theory, what do you get for that extra 70 USD?. 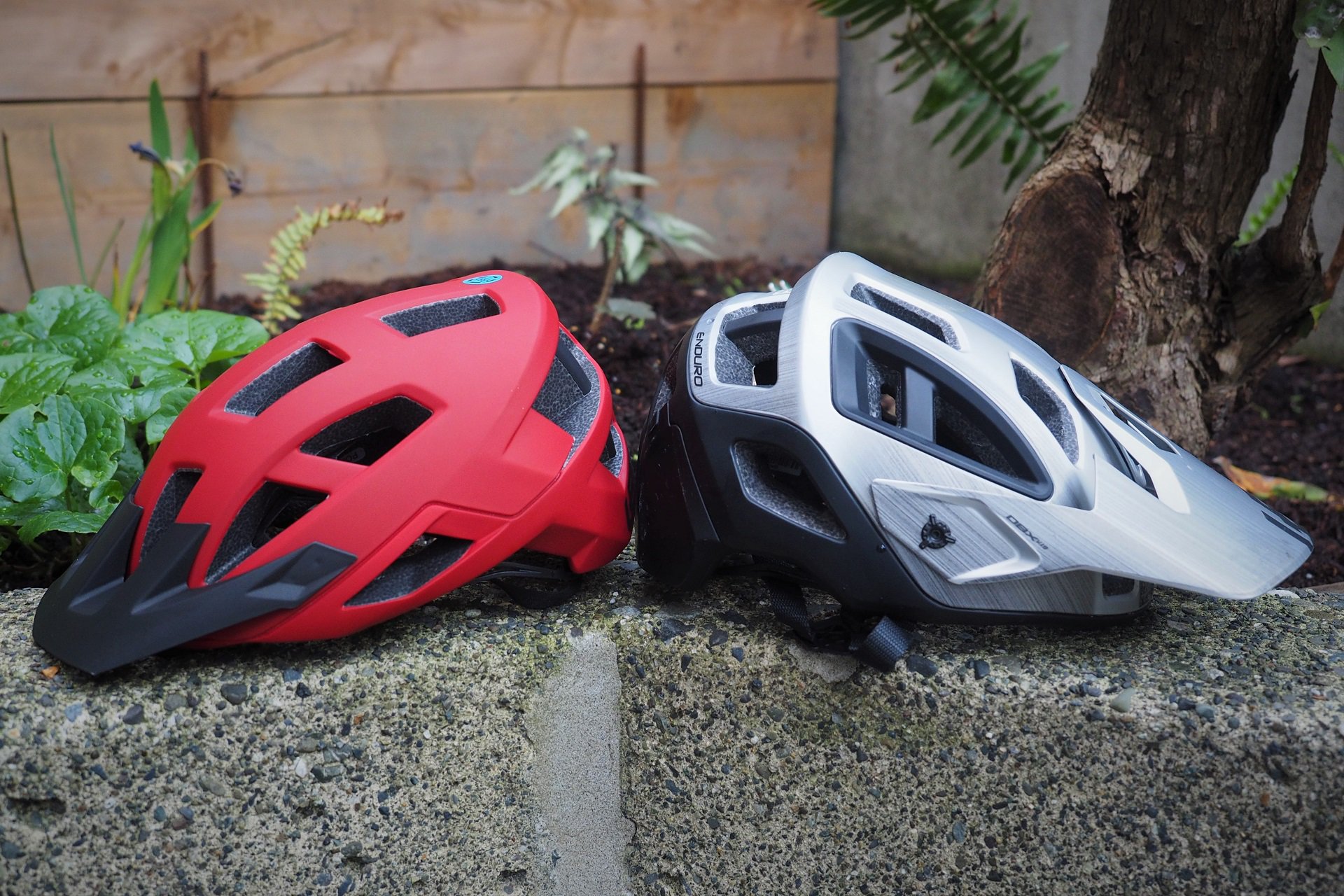 The better looking DBX 3.0 is an extra 70 USD. It gets an adjustable visor, which I like, and more colour options. 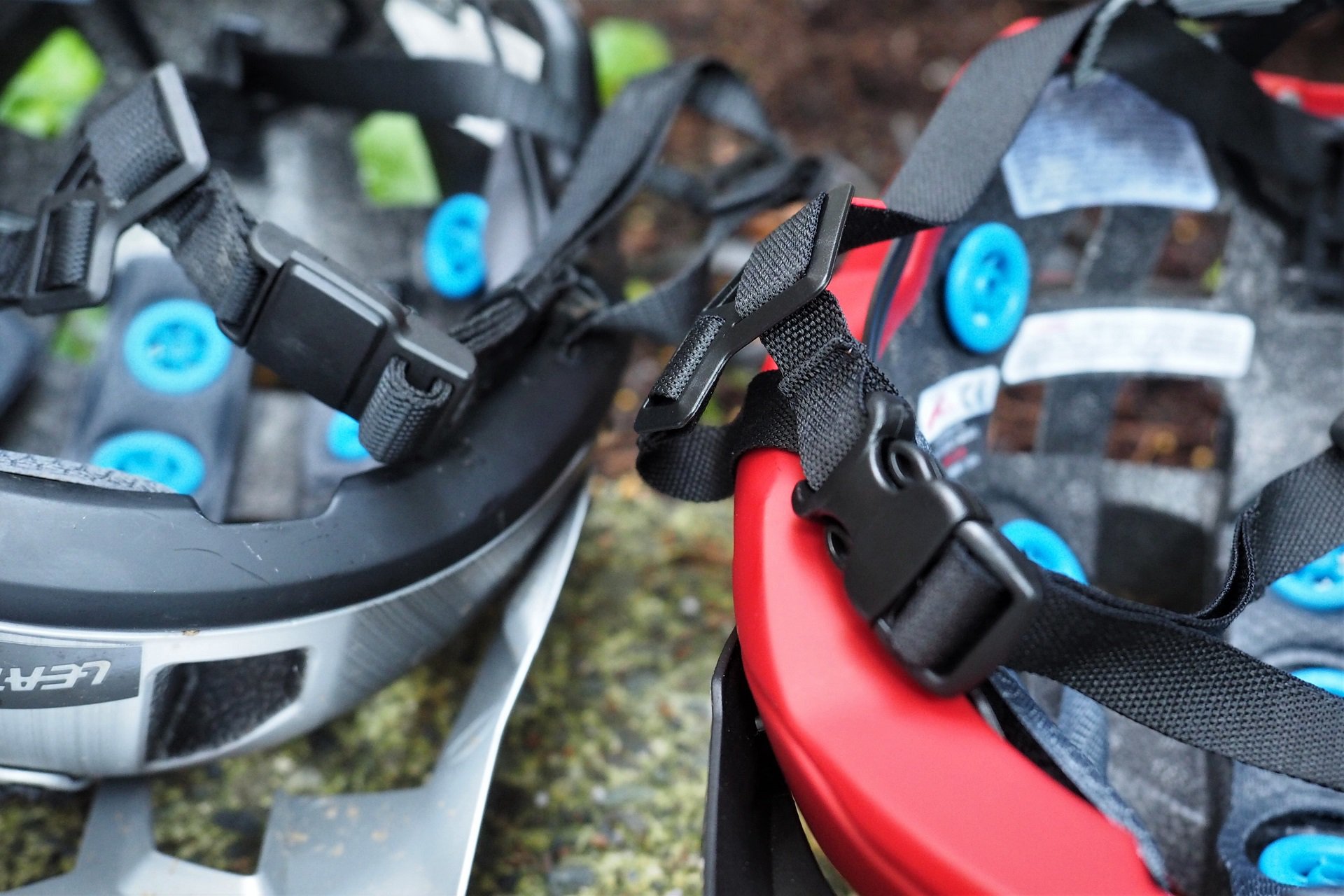 The DBX 3.0 also has a magnetic Fidlock clasp, which I wish came on every helmet.

Cosmetics aside, the two features from the DBX 3.0 I miss here are the Fidlock clasp and the adjustable visor. The vast majority of helmets, including those twice as expensive, use a basic plastic clip like the DBX 2.0, so it's easily forgiven. I like the large and adjustable visor on Leatt's DBX 3.0. It does a better job of keeping sun and rain out of my face and I like to run my visor high when the elements aren't factors. It's better, but 70 USD better?

There are better looking and better-vented helmets for the same outlay as the DBX 2.0. Increasing vents and styling means harder foam and theoretically a less effective helmet in many mountain bike crashes. For an 'Enduro' themed helmet, the Leatt breathes very well and I can't think of a better helmet for the money - assuming it fits. 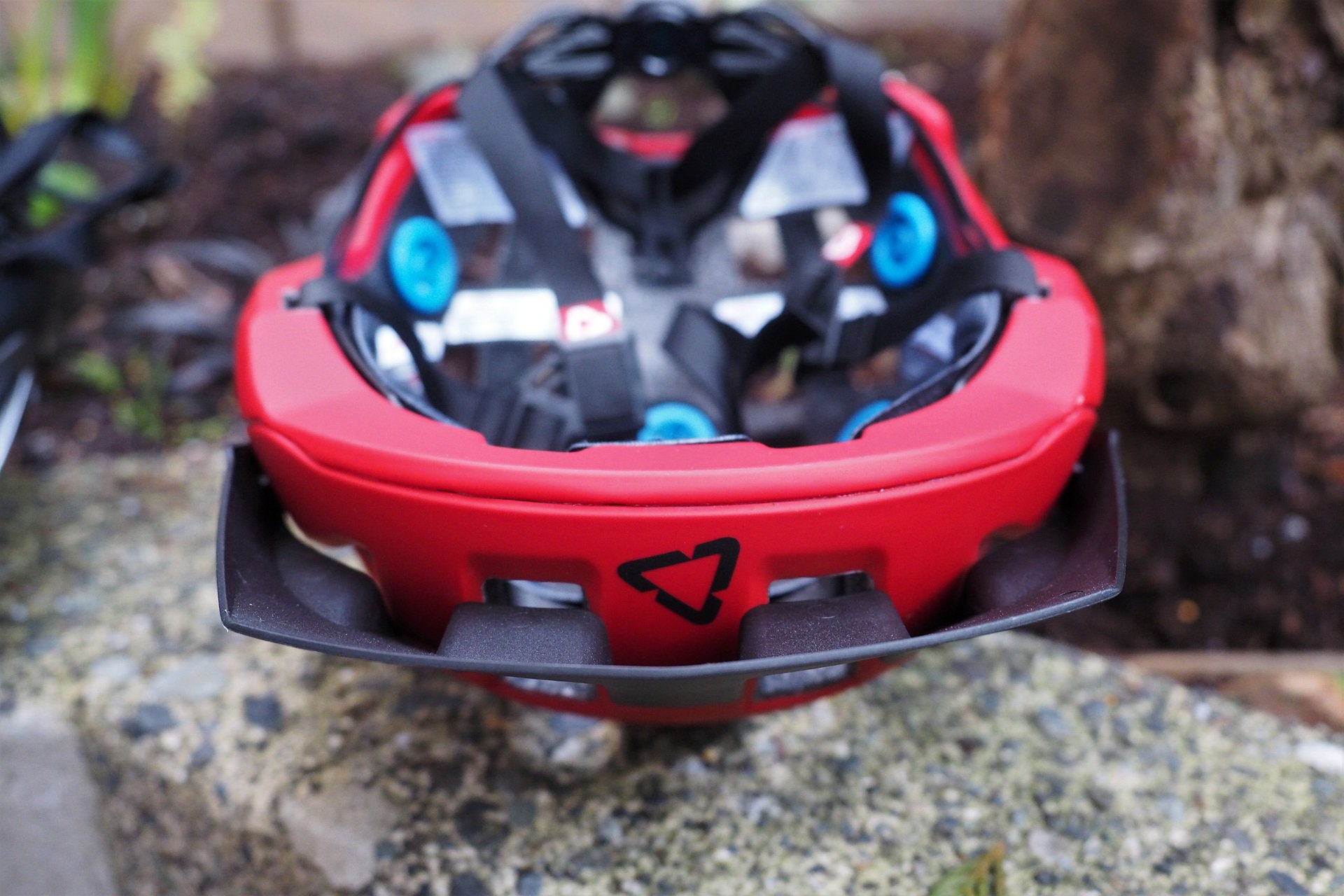 The liner, 360° Turbines, and retention system make for an awesome fit.

Independent of price, I'd be riding DBX 3.0 as I prefer the styling, visor, and clasp. But, on my own dime, I can buy a lot of really good beer for 70 USD and the same fit and safety features from the 100 USD Leatt DBX 2.0 would be my choice.

For more information on the DBX 2.0 check out Leatt here. Up here in Canada your local dealer can order from NRG.

Leatt has nice products, been trying to get a jersey from them . NRG said June/July for a long sleeve wind proof jersey I tried to order in Jan . I cancelled and re-ordred last week with fall just around the corner . New reply , we have no idea when to expect the product. Leatt will not ship to a Canadian CC and the Canadian Dist as very limited product range .

I'm not making excuses, but this is NRG's first year as the Leatt distributor. I think the DBX 3.0 (removable chin bar full face) and this DBX 2.0 are both excellent products and I'm hoping they're available in a lot more shops next year. One of the hardest parts about writing about Leatt - from a local perspective - has been not being able to suggest places to go try a lid on.

I'm a fan of Leatt's turbine tech, being a bit of a MIPS pundit.

I’ve stopped looking for the best vented helmet personally. Check out the link to my discussion with Brad at Kali if you’re interested.

The Coles Notes are that the best vented lids (road lids for the extreme example) need to use harder foam - or rigid skeletons - to pass testing which can mean they don’t do their jobs (sacrifice themselves to save our noggins) in the lower speed crashes that make up a lot of banging our heads on mountain bikes.

I used to wear an S-Works lid (light, great venting, Carbon skeleton) until I did a header into a stump and despite having a bunch of physical ailments the helmet was 100% as new. Speaking to Brad it was like an alarm bell in my head. It’s amazing how many lids use some kind of reinforcing skeleton to make for larger venting.

Anyways, to sort of answer your question I think the DBX 2.0 is the best of all worlds on the market. At a higher price so love the Kali Interceptor (it has better passive venting than the Leatt, BOA, adjustable visor but at a $$$ premium). Both are good by the standard of Enduro open-face lids but not compared to the road/XC lids I used to wear.

Fantastic response.  Thanks for taking the time!

Funny thing is that I agree on the approach you've stated, I just want the best vented version of that approach.

Seems like the choices in the arena are Leatt, Kali, and 6D.

It's not a budget lid, but really happy with the Kali Interceptor.

How does the 2.0 fit compared to the 3.0? Are the the same shape inside? I ordered the 3.0 with the removable chin bar and it did not fit well and i'm not sure sizing up is a great idea.

I found the non adjustable visor on the 2.0 a problem. I needed it higher than it went. Fit was similar to the 3.0 which I do own.

I’d call the fit identical. I also prefer the adjustable visor but don’t know that I’d pay for it.

In my experience in retail some helmets just don’t fit some people. If the 3.0 doesn’t fit well (lid with chinbar removed - chinbar adds another element) the 2.0 won’t fit well.

Andrew, can you compare the  fit of the Leatt to another brand? Ive been looking for a helmet that jives well with sunglasses, as its hard to ride without them here in CO, but almost every MTB helmet on the market makes it hard to wear proper riding glasses without interference around the temple or ear.

I wear POC now and I like Bell, but neither work with sunglasses. The Leatt (3.0) has been on my radar, but have not seen one in person to try on.

I have a couple of pairs of Ryder's glasses and my trusty (~ancient) Specialized adaptive lens glasses that I regularly wear.

They all work with the Leatt 2.0/3.0 with no interference with the shell.

The Specialized glasses have the best fit because of the structure of the arms (they are quite heavy glasses) gives me great retention worn over the helmet retention system (not straps).

Interestingly (to me at least) this doesn't come up at all with the Kali Interceptor (BOA) helmet I'm testing.

I'm more of a Giro head if you're using Giro/Bell for a fit comparison. Although, I feel like those brands fit more similar than they used to.

Finally, the moral of the story is Specialized made wicked sunglasses (in Italy) and it's a shame that they stopped because my decade old shades are awesome (and I really don't care they're a bit heavy).