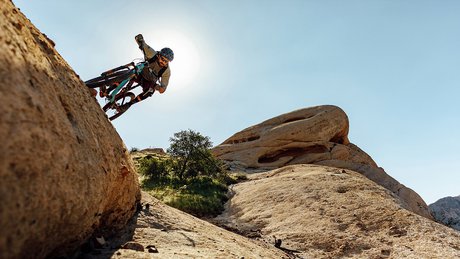 “If you’re talking about Squamish, and want to see not how, but if you stack up, there is a new standard and it’s the Treasure Trail.”

Wade Simmons in a Onesie

Wade Simmons was apparently a reluctant participant in this particular spoof - but it was clearly the role he was born to play...

Take the ‘stupid lines’ and just flow straight through them…

Wade Simmons goes on a tirade - but then he rides some of the best preserved gnarly lines on the Shore on his new Pipeline...

Backcountry Bushwhacking with the Godfather

Pack the map and compass, because Wade and crew get way out there...

Living The Life Of Wade

"I'm not only a professional mountain biker, if I have any free time I want to go mountain biking..."

Wade takes home the top prize despite a gnarly bail that almost ended with him running off a cliff...

Model or Rider? or Model/Rider?

For these participants, turning pro merely requires looking good while doing something which vaguely resembles their chosen sport...

Should mountain biking embrace a public high five when athletes move on - or pretend the relationship never happened...