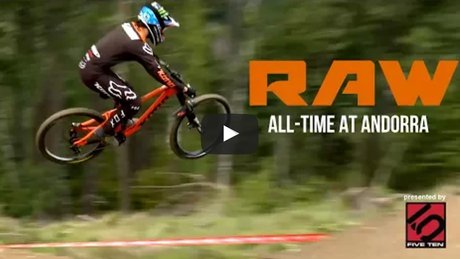 69 seconds of pure, RAW riding from the Fraser Valley

It's not full roost until someone kills a tire...

Raw Riding in the Granite State

It's peak fall in New England, which means the loam is ripe, and the trails are all-time...

Anthony Messere Gets Raw in the Back Yard

Nothing like big jumps and a world-class training facility just steps from the house...

The Sound of Speed in Vallnord

Move over Keanu, there's a new king of speed out on the trail...

It's open season on the track in Switzerland as the racers get their lines dialled in for Sunday...

A little sun didn’t make the wet track any easier to handle as racers pinballed from rut to rut. It was true RAW Leogang Rowdiness.

It might not be the swamp we all know, but the track is still a barely tameable beast.

Looking fast, and just ahead of Lourdes…

Absolutely pinned riding through every frame, accompanied by a sweet onboard soundtrack.

RAW and Sloppy in Wales

Emyr Davies returns home to ride a secret track that's deep in the woods. Roots, rock and tons of slop make for some near escapes and wild riding...