"We have chosen our own title to ensure the message is unobscured by the rad riding of the Coastal Crew..."

"Life moves fast so don’t force it. Let things flow, and do what feels right. Not because someone else wants it, but because you want it..."

"In the midst of all this, there’s been an insurgence of trails everywhere, from logging road networks to old landfills..."

You could watch this for the filming and editing alone - but the riding by Curtis Robinson is Coastal Crew quality as well...

"Brendan Howey has been with us from the beginning as trail crew and patrol - and in early 2015 he began making his mark by building his ideal big bike jump line..."

‘423 hectares of torched forest presented an opportunity we couldn’t pass up, it was time to take out the tools and load up the camera gear…’

The Coastal Crew has had other members in the past - but Dylan and Curtis have always been the core...

Two Thirds of a (Coastal) Crew

Curtis Robinson and Dylan Dunkerton let loose on their big bikes with a subdued (classical!) soundtrack...

Curtis Robinson takes advantage of winter conditions and makes some noise on the trails near his home... 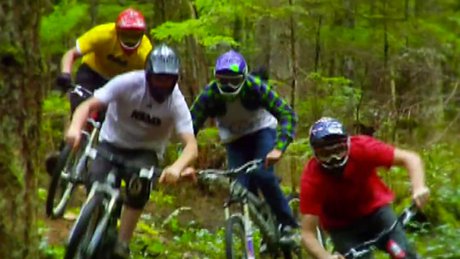 A dedicated, lift-accessed bike park near Sechelt, BC…