VIDEO(S)
Weekend Warmup - All Out Edition

Danny goes out on a limb, er, blade for his latest video to highlight the importance of renewable energy...

MacAskill, Semenuk, Zink, Sandler, Brandt and Vestavik drop their videos for the first X-Games Real MTB. Spoiler, they're all incredible…

Skinny to Land Rover roof? Why not! 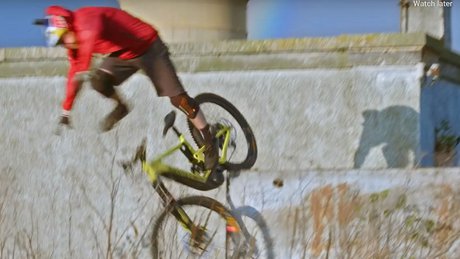 Danny Mac and Run-DMC have one thing in common: they both love their Adidas...

MacAskill bails several times and even takes the cameraman and his riding buddy out in very mucky conditions...

VIDEO
Behind The Scenes with Danny MacAskill

14 stitches, 6 flats on one trail, 25 attempts for the trick Danny describes as "one of the most difficult tricks he has ever done on a mountain bike..."

It's just your typical trail ride with Danny Mac in the Scottish Highlands.

Santa Cruz claim their wheels are the strongest on the market, and now you can have a set all to yourself.

MacAskill attempts to summit and descend the largest mountain in Africa...