Thanks for your interest, and thanks for pointing this out. It turns out I need the "http://www." part.

I'm not getting Disqus notifications either, but I'll be sure to check back here periodically if you have any questions about the project. Or shoot me a message on the Kickstarter page.

The neat-freak in me wants to delete and repost my post things back in order, but then your reply will be out of order, and the neat-freak is freaked out by that!

Here are those links to the Beta stories about the Datum bike and the one titled "Why It’s OK That the New Digit Datum has a Proprietary Rear Shock". There's no tech in there which isn't on my page, but a Ferrentino review is a better read than my list of specs.

If anyone else reading this is interested by this bike, please check out the DigitBikes Kickstarter, it's already 57% funded in just few days and the discounts are substantial for a mUSA bike (the MSRP will necessarily be somewhere in the Reeb to Geometron range)

Have a great weekend, happy trails.

@Andrew Major, apparently our conversation thread closed before giving me a chance to respond. I'm not sure if that's a feature or a bug, but it seems worth looking into.

I hear you on the comparison to the Maverick, they stiffened up when you stood up which is the opposite of what I want. My point was that their shocks, which were longer lasting than the chassis', and were also serviceable (mostly) without special tools. The shocks customer support improved as the company grew, and it probably would have improved further if GT hadn't sued them out of existance with the iDrive patent.

Off the top of my head I know at least 2 places in the US who would service them, 1 in the UK, and parts were available for years (maybe they still are) through an outfit in Colorado; and I looked at the manuals online recently for inspiration for my own shock (though it didn't really provide any).

As I mention on my main page, there will be teardown videos and manuals. There's another discussion of the shock on Beta's site, and on MTBR, and to a lesser extent on PB (I've not posted the links here, because I'm not sure whether that's cool or not).

Oh, and perhaps you hadn't realized, the reason I posted this is that my bike has a "crate" rear end. 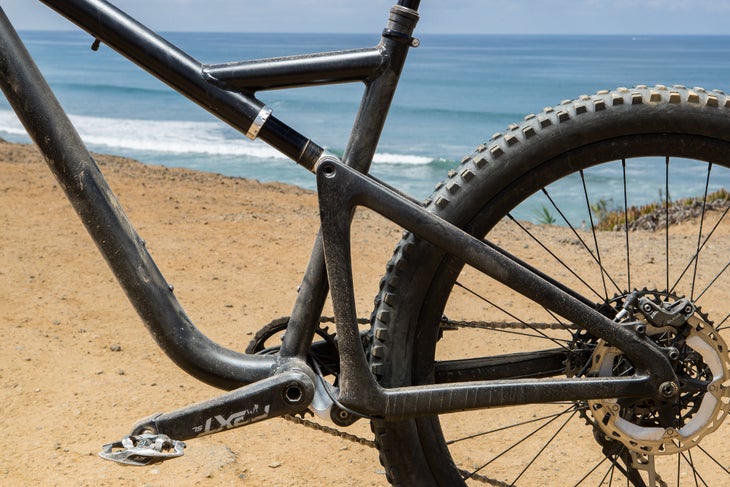 The same concerns might present if an idler assembly wears out on a bike made by a small manufacturer.

For the first year or two Maverick made their own shock (M*Bits), then Fox took over. Before covid I was talking with some of the established suspension manufacturers and had hoped to work with the them, but because of the current supply chain delays some of them are now facing a 600 day lead time for OEM delivery. This is not a great time for them to focus on my project, and it's not smart for me to rely on that. So, rather than wait for 2 years (to possibly then learn it could be longer), I can start this by making my own shock - the parts are simpler to machine compared with an eyelet shock (or an idler sprocket). I've consulted with the earliest founders of MTB suspension, and the most respected gurus in motorcycle suspension, and since launch I've been approached by industry guys with ideas of suspension OEMs who might have some capacity.

I've been a wrench since way back when, I did this in the name of reliability, serviceability and to get past some shortcomings of standard shocks.

This shock can be serviced, all the way to the oil and shims with tools you should already have, the most esoteric being a Schrader valve core remover, and the seals are all available at (good) hardware stores.

I wrote a big ol' thing about it at digitbikes.com (under the INTEGER heading). There's another even bigger write up about it on Beta.

I guess this could potentially be bad if you're currently turning wrenches for work as people might repair at home, but I doubt it will put anyone out of work. There will always be folk who don't want maintain their bikes.

The primer I painted it with had that rusty hue!

Given any option, I just built this: DigitBikes

Sorry, I haven't emailed a press release (yet?).

I have a 12 year old son who sometimes joins me on bike rides. Though I sometimes make arrangements with other small-human owners in setting up specific group rides where he can tag along, my default is to not bring him along on group rides.

He is relatively good at responding to commands and does not shed in vehicles, but the pace and vibe of the ride is inevitably changed by his presence. I've not seen him poop on the trail, but I really wouldn't want to ride through it.

Those earlier VPP bikes use a finer thread pitch on the pivot axles than more recent versions. In my experience the threads are prone to stripping out in the carbon parts. Though the photographed parts look in OKish shape, you can see where the anodizing has worn off of the thread crests and the bolt head bearing surface. I'd recommend periodic replacement of the axles to give the female threads in the rear triangle their best chance of longevity.

I believe adjusting the tension for free running of the bearings, like on an old headset, can also lead to failure. Inadequate tension on these axles can allow play in the threaded interfaces, which causes them to wear away - liberal application of Loctite probably helps to relieve this. I guess one reason SC moved from angular contact to deep groove bearings with a spacer between was to allow higher tension and thus less movement in these threads. If there's room in your link for a spacer it might be possible to fit deep groove bearings kits from later versions, though I've not tried.

That wasn't what I was trying to point out. The important deviation I see is in setting the clutch friction, where it says "...set the desired tension now. Check that the on/off lever is working properly." - this is where the torque wrench (set at 3.5–5.4Nm) is needed.

This is the only place where I'd bother to bust out the torque wrench, since this is the step where the clutch gets adjusted to work like new, which is the whole point in this endeavor.