Over the 5 months of the contest I submitted 5 videos, 4 made it into the finals. After spending so long building these lines I was excited to enter them into the competition. I had no idea that 4 would make into the top 16. Hope you guys don't think that's 'shitty' on my part. It's not like I paid them off or something, I just like to think it's hard work that got them there :)

I was a little shocked when I saw how many entries you had in the finals, but then I realized that each one of those entries battled it out in the monthly finals fair and square. The people have spoken and they like your videos :)

The head-to-head elimination rounds for the finals have begun if anyone feels like voting again :)

I agree that changes should be introduced. I've seen a trials forum die because it wasn't moderated and this is going in the same direction. I'd rather have a slow forum than a trolled forum.

Dreaming of an aggressive 29er for the North Shore and PNW

Oops, you're right. I they have a rearward offset, but not forward. wonder if you could run it backwards and get a forward offset.

If you ran it forward, it might start to bind or put uneven stress on the seals as the force is applied at more of an angle instead of along the post. I'll probably end up trying it on my next bike anyway since most medium frames now have the same reach as a large used to :(

I ride fromme and Seymour mostly so I want a bike that I'm not dragging up to 7th and can pedal up Good Sir Martin..but still enjoy coming down seventh secret, neds, and a good ride along bridal.

Do a lot of you guys do fine with 150mm trail bikes all around the shore? Or are the new enduro bikes manageable enough on the climbs?

i do like the comfort of being able to plow over stuff if needed but also really enjoy a good trail ride. seems I'm stuck in the middle.

I demoed a 2015 Sight and a Range, and ended up going with the Range. Boogieman was my go to trail at the time and while I could certainly manage everything on the Sight, I preferred the extra confidence of the Range. As you mentioned, it's a tough call though as there is always a trade off. There was no doubt that the Sight was a more efficient, better pedaling bike, just as there was no doubt that the Range was a more capable descender. The 2016/17 Sight were upgraded to a 150mm fork and some burlier tires though, so there's that to consider as well.

If you do end up going for the Range, you could try to find a 2016 A7.1 on clearout and then try to get them to upgrade it to a stealth dropper: http://www.johnhenrybikes.com/product/norco-range-a7.1-239979-1.htm

heard carbon forsure to start , but one guy who has ridden the bikes said he thinks there may be a alloy version later

There will definitely be an updated alloy version of the Range and Sight. I'd expect to see them for 2018 model year.

As for the reach, it would be a pretty safe bet to look at one of their more recently updated bikes like the Sasquatch: http://www.norco.com/bikes/mountain/fat-bike/sasquatch/sasquatch-61/

I did! Thanks to everyone that voted. I was happy to make it into the monthly top ten and didn't think I'd stand a chance against the pros.

And a huge thanks to Rob Hlus and Ian Collings for building this one of a kind trail. Their woodwork was probably responsible for the majority of those votes!

I thought it would be cool to have the shore represented in this year's GoPro video contest on Pinkbike, so I submitted a run down Imonator. If you dig it, you can vote for it over on Pinkbike. Enjoy! 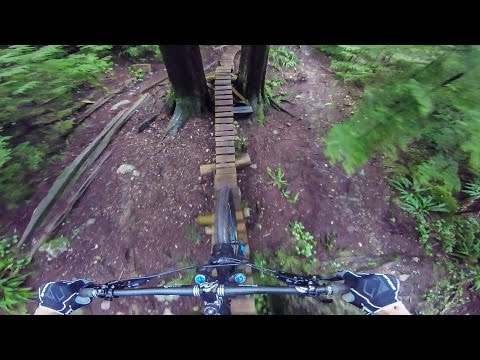 And here's some leftover footage including a crash and some different angles that I didn't end up using:

I am disturbed by the lack of transparency in the decision process. And no, I do not consider a 9-year old report sufficient basis for the decision. So much has changed since then, especially with trail building knowledge.

Wow, didn't even look at the date on the report. 2007??? That would explain the grossly inaccurate "high level of use" label for Pink Starfish lol.

Very sad. Is there a report detailing the environmental concerns? If there's sufficient evidence to support the closure then so be it, but in the name of transparency that report should be available to the public.

I'm torn between asking WTF and thinking that this would actually be awesome for north shore winter riding.

I'm not saying that mountain biking should just go and create trails anywhere and everywhere they please, but to suggest that mountain bike trails as a whole have any sort of remotely substantial environmental impact is complete BS.

I made that post because I won't allow people to claim they care about the environment when they single out riders and turn a blind eye to everything else. How many square kilometers of Seymour is taken up by trails? Trails that consist of dirt, rock and fallen timber. Now tell me how many square kilometers of Seymour has been developed for residential, commercial and industrial purposes. Eagle, Burke and Cypress are great (and recent) examples where people complain about trails while the mountain side is literally torn apart for development. Pointing out simple facts like this will help our cause much more than engaging in name calling.

it was on digger. Built by Matt Nodwell. He brought the "trials" flavour to the "Digger" line. Total resurection of that line which lasted quite a while. Torn out by the authorities a few years ago. I helped him to mine old stringers from Watchamacallit to build some of the other features he added.

Honestly breaks my heart that trails like that aren't around anymore :(

I'm curious to know what the condition of the park is these days. Judging from a few shots from Crankworx, some of the trails look BEAT with huge breaking bumps. Is that an accurate assessment?

Fffffuuuuu sprained my finger last weekend and will miss out :(

What features will I be missing out on?