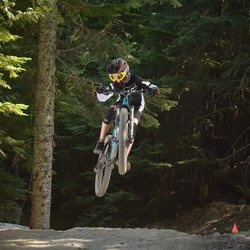 My Naked has a short rear end like this one does and perhaps that’s one of the things that makes it a bit more demanding to ride - as in you MUST be hard and dynamic on the bars or the front will wash out.

But once you do that - MY GOD.

Hard on the bars. Always. Maybe it’s one of those things you need to try or maybe it’s not for everyone.

It has a 32mm stem. Works super well with the long front center and 64deg unsagged HA on the terrain I ride which tends to be techy janky stuff.

There’s something about being able to run plus tires at 13psi that brings a smile to every ride. Rough stuff too. These monster hard tails take no prisoners.

Find a builder you relate to and order up a hardtail in modern geo. Amazing.

I feel that 29r, especially in plus, is a game changer for hardtails. There is no perfect bike for any one ride as, especially on the Shore, segments of the ride vary so much between eachother. But my forward geo Naked 29+ can get as rowdy and is as capable in sketchy stuff as my Slayer, and Id suggest even more so in steep stuff. I do not miss the rear suspension most of the time with 29+ and cushcore in the rear. Having the big tires with inserts opens up a lot of new possibilities.

Bikes are tools and no one tool is perfect for all situations. But hardtails are also art!

Will the photos you're discussing be visible anywhere? Love looking at the history and getting the backstory.

Great article. I think it hints at just what a knife edge some trails might actually be on. Authorizations and signs and history means a lot, until you wake up one AM and they didnt. People need to speak up at every occasion when the Districts take any action that reduces your ability to ride the Shore.

And zero sum game, I hope that doesnt mean that something has to go before we get that route up to the Bobsled switchback from BP. Come to think of it, last time I rode by that area, it looked like that route was already in use! FREERIDE ASCENT YO!

Those guys rode it well. I bet that Dougie was taking all the sneaky Strava lines all the way down too.

I hope Dougie gets what he needs before hibernation and that his show'biz days are done. He looks like a good guy - probably didnt mean anything threatening - he turned around as soon as those guys stopped. He was probably just bored and wanted a game of chase for a bit. Who could blame him?

This also makes me miss mine terribly.

A steel HT is the perfect excuse for a 2nd/backup/spare/guest bike.

Yeah totally. Having a second bike saves me a few weeks of dead space every year. It also gives you time to sort stuff out more economically than if you need a broken bike working again ASAP.

If I didnt end up with my 29+ forward geo Naked, I was getting an Arcturian. Big rubber on big wheels on a steel hardtail with modern geo, so much to love.

That combo has surprised me a lot over the 4 months Ive had it. On the undulating, back and forth, techy jank that I love to ride - its awesome. Massive grip with 14 psi and cushcore. Great feedback through the pedals. My Naked has made me a better rider - Im working the bike A LOT more. On the bars much more. Banking the bike more. The hardtail has made my stance much more active and dynamic. After riding it 90% of the time this summer I find myself with a mechanical keeping the hardtail in the garage for a bit, so the Slayer is back out in full force. MY GOD.

Once I got settled riding the hardtail it would consistently surprise me with its abilities. I was shocked at how well it shredded janky stuff.

Turns out it wasnt the bike as much as I thought it was; it was how the hardtail forced me to ride.

It sure is nice to have two awesome and different bikes. Moreso than how cool and awesome it is in itself, one of the things I like most about my Naked is that it has forced me to become a better rider. Its about more than choosing better lines - for me it has forced me to have a more dynamic stance and be more active on the bars.

Don’t know why the jank always gets axed when trails are revitalized under authorization.

I’m seeing some crazy pics of the new CBC - it looks more like Bobsled now.

I will celebrate when those poachers are caught.

Has to be at nighttime with bows. Some game cameras in logical locations should catch them If this becomes a thing. I feel being tied up to a tree deep in the forest with mouths duct taped for the remainder of their days is the proper outcome.

Update: Im loving my Naked. Use it 85% of the rides although I did take the Slayer to Fromme today and was reminded of how awesome it is too.

Ive always liked the Naked but I started to LOVE it when I got the hang of staying on the bars hard. These modern hardtail slayers are super capable but for me, I have to be further forward than Im used to. Its made me a better rider as I rip the Slayer the same way now.

Top of it is BC Parks

Bottom of it is potentially sensitive forests

Only very small amount of parking available outside of Cypress Ski - and its already full of forest walkers!

If you hike up to Eagle Bluffs from the area of the ferry you'll see just how steep it is! Much of it is more cliff than ride able steeps

My guess is its probably much easier to go with an established zone and existing trails. The headache associated with getting any recognition for trails that are ALREADY cut, maintained and popular is unbeleivable - new stuff would be a life long project.

I’m not a truck kind of guy but what do people think of Gladiators?

Seem to be expensive - especially when you compare them to Wranglers which I would have thought would have a lot in common.

Myself, I’ve been liking some of the sweet 4Runner set ups I’m seeing around lately.

I think Craw has it correct. As long as the trails do not directly impact development, I agree that we are more likely to find flexibility with the landowner than otherwise. Its also always possible for the District to assist via indemnifications/rights of way, etc... to address the concern the landowners always have about this type of thing: liability for injury of those using their lands. Right now BPP is fully protected in my view by their No Trespassing signs and Waiver signs. Dont step foot on Cypress if you feel otherwise!

I think that the trails plan will have to be fluid around the development plan and it makes perfect sense to reroute exits for trails that end around the first sb converge into the same area. I also believe that it would be better for Cypress Village to have easier MTB access than poor MTB access for business reasons. We are definitely going to lose some classics in the area of the first sb, but Im hopeful that we (as a community) will receive some benefits elsewhere.

For that, we will all need the community to step up when the time comes.

Gord, I spoke with Alan last night and he mentioned the FBsite. Lets see how things evolve and we will certainly look for anything and everything that might be helpful to preserve the unique Cypress riding experience.

I spent the AM bushwacking Lynn Headwaters west side of the creek.

He’s out there - last seen in the area I looked but lower elevation - down by the creek.

Everyone keep your eyes peeled. Oakley is counting on us!