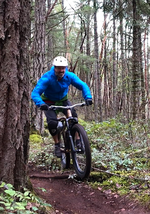 I honestly don’t get the love for inserts… yet. I’ve now tried Tannus, Cushcore, FTD II and Rimpact all on a hardtail running either 27x2.6 and 2.8 and 29 x 2.6. In all cases they just made the bike feel more sluggish, heavier, less playful and the worst insult? Harsher… I’m baffled these are still a thing. Still I hope one day someone will come out with a version of these that is actually fun to ride. Maybe it’s these?…

All things being equal, you'll get a touch of extra reach because the bike will sit slightly lower at the front. Much like how a hardtail reach will get longer as the fork sags. The amount will be quite small as the offset of the angleset itself cancels out some of those gains.

@Cam can you please ask your SRAM contacts to allow us poor dirty Canadians to order their products from US online retailers?

I don't think the benefits of steep seat angles are ubiquitous. I recently jumped back on my Knolly Endo (decidedly old school geo)  after more than a year on a custom hardtail that I had built with a steep sta, long reach and slack head angle and I was shocked at how much easier it was to climb a tricky technical switchback (Twister for the Victoria locals). Climbing that trail the very first ride on a bike I haven't ridden in a year blew my mind. It has nothing to do with traction I've never lacked it on either bike. It had everything to do with power. I could apply much greater leverage on the shorter bike both seated with the slacker sta and standing with the much shorter reach and steeper head angle... Honestly I did not expect that ride to go that way. It is a definite eye opener that perhaps I went too far in my design. The other major issue is I had hoped to use the custom as my ride to the trail bike but that steep sta (77deg at sag) makes for a terribly uncomfortable ride on anything flatish.

Having said all of that the custom is a fun bike to ride but its less me the operator and more me the passenger than my Endo. Its long reach and super slack head angle make it more confidence inspiring when barrelling down steep scary things than the Endo and its a hardtail! It is a solid up and down plow bike for sure but most definitely not an all rounder.

Looking at those pictures of you AJ; despite those big bikes you still look much more upright seated (and I'm running 20mm of spacers and a 45mm rise) than I do perhaps its more to do with my unusually long femurs and short torso its such a pain to get a comfortable seated pedalling position for me that doesn't compromise shred factor too much.

I'm not sure I buy the adaptation to riding more forward as the better way to ride mountain bikes off road. My wimpy arms are no match for the power in my legs and large back muscles.

I admit to trying an Ikon out and pinch flatting both times (sans insert) I don’t have those anymore. But maybe with an insert... rubs delicate weight weenie hands together.. I dig your content dude even if I think your crazy sometimes. ;)

"If I'm going to run CushCore anyways why go through the extra investment to have carbon hoops when the inserts essentially equalize the only advantages that carbon has over aluminum for a rim application?."

Thats because you are the antithesis of weight weennie Andrew. My no name carbon i35 are about 115-130grams lighter per rim than an equivalent decent quality rim like a DT Swiss. So one obvious reason is you get the other benefits of an insert like softer landings (great for HT use) or tire support with overall less weight.

Wheel weight sucks, it particular sucks for those of us on the lower end of the athletic scale. No other single bike part "upgrade" has made my bikes feel more fun to ride that a great lightweight set of wheels especially when combined with the right set of tires. Disclaimer: It goes without saying I hope, that if one is breaking stuff all the time, choose accordingly.

"It's interesting how important height and weight are to a review, but how little they get talked about. Read reviews where one tester is heavier and one is lighter, and it can almost sound like 2 different bikes in certain scenarios."

THIS so much. Drives me crazy we don't reference sizing by where our body parts land in space on a bike. It's why most reviews provide little value from the perspective of determining if the reviewed bike would be suitable for ones use. Body morphology is too unique. Unfortunately most bike seat tubes are curved nowadays and unless you can get the offset of that tube its tough to make certain important considerations about seated position which impact cockpit length etc. I encourage folks to download an app like Rattlecad which does have the ability to play around with offset and every other number including considering fork sag on hardtails. For full sus X3 is worth its weight for sure.

A recent personal experience of this important measure; after having a custom HT built and drinking the steep seat angle koolaid, I thought I'd try a 75.5 static based off a previous ride where it seamed thats what I was riding, that was a mistake. At 5'8 with a short torso and long femur its only comfortable when I'm pointed uphill. What I should have measured is given the same saddle (and crank length) how far away is the nose from the BB at comfortable pedalling height? I no longer give a crap about listed angles I just want to know where my saddle will land relative to the BB at my ideal pedalling height. Then I can determine; at this height is the rear centre too short for climbing without feeling like I'm wrestling a rhino at the front of the bike? Or, will the cockpit be too long or too short? Needs an article with sample bikes drawn up.

Same, my fav brake in my fleet is the pre 000 series Deore, simple, dirt cheap (when it was around) and worked forever, ya its a light switch but I dig that tap tap go... I still have a set that I've not done one damn thing to except change pads for 6 bloody years, still works perfectly! I can't say the same for any other brake system I've used including latter versions of the Shimano products sadly...

Ya I'm not sure why manufacturers are so fixated on short chainstays. Steep seat angles help with climbing performance but they also seem to necessitate taller bars which exacerbates the short rear centre issues when climbing. I like em short on my everything else bike but it sees primarily road, dirt path and the pump track its the play bike but on the trail bike I'd prefer not to have to fight the front end end when I'm already struggling up a gnarly switchback. In all cases the days of hunching over my bike are long over I want a nice comfy cockpit which means higher bars with a touch more sweep please.

You'll likely need a 1/8 chain if using a half-link. Most narrow-wide chainrings will not fit a 3/32 half-link.

CoilAir, it can be as complicated or simple as you like! The leverage ratio refers to the amount of force applied for a given travel distance. Bikes can have higher, lower or variable leverage (and as such force applied) differences through out the entire range of available travel. In the case of the Process 153 it appears that you're leverage ratio changes very little from zero travel to full travel and falls from a higher leverage ratio to a lower ratio approximately 2.84 to 2.62. So at the beginning of your travel you have a bigger lever i.e. more force than you have at the end of your travel a smaller lever i.e. less force. The force chart is simply indicating how much force that lever is applying at a given travel.

Make sure your wire and spade are appropriately sized for the amperage. Good luck. Coffee machine down = bad.

I have a Nimble 9 which is similar in Geo to the Honzo or Taro. I can say that its is a great bike with ridiculously short chain stays and a similarly very short wheelbase. Its a fun bike to ride for sure but not nearly as fun as my Heckler.

That was tough to stomach as first (my first modern bike I built) but riding back to back even on trails that really don't warrant the Heckler I'd prefer to be on it. I have relegated the Nimble 9 to my bike packing bike and occasionally will take it out for a ride around town but for fun on the trails its the Heckler all the way.

Despite its geo I just can't manipulate the 29er as easily, level wheel lifts, front wheel lifts manuals etc. are all more difficult to do on it. I suspect that despite the progressive geo one still has that BB drop to contend with and that changes leverage ratios significantly. The heckler with its much longer wheelbase (1138 vs 1080ish) much longer chain stay (439 vs 415ish) feels more nimble and fun, it does have the smaller 27.5 wheels and a correspondingly shorter BB drop… My 2 cents.

I'm also heading in the light as possible direction. Went from Flows to lighter wheels (still trail oriented) and from the 2.4 Ardents to the 2.2 Ikons. The difference in weight/feel has been awesome (I run both tubeless.) I'm now convinced that my bike budget needs to redirect as much funds as possible to even lighter wheels! I like those Beavers but the EXO version is 760grams which likely means closer to 800 about the weight of the Ardents…

The start of our local haunt here (Hartland) is one big climb. The rest is short ups and downs its just too much climbing for the big tires for too little pay offs on short downs.