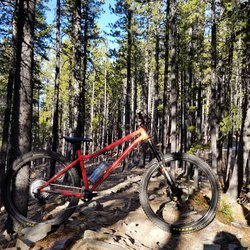 Alternative viewpoint: I find the sleazy "spy shots" content irritating. I skip it. What productive content is possibly going to come from a potato-pic of a bike on a rack?

Now, if you had a piece about crazy genetic monster prototypes on a factory tour with some high quality images I'm all in.

Excellent series, thanks for sharing.

Was curious about this as well. Is the smaller diameter of a coil air shaft vs. an air shock shaft a consideration too?

I wish there was a gauge that could be bolted in place of a shock to check for alignment/binding as the shock cycles. I guess the condition of the anodizing is sort of like a gauge ...

Can we please get a detailed vehicle check too? One of those Pistons and Pedals, MaxxGrip and Motors, or whatever the series I liked was called?

My mom's an Indian immigrant, dad white as white can be. Similar response from both. Neither one of them particularly active, and I ended up biking with almost no family support or example to work off of. I wouldn't say any side of the family actively discouraged me but they just didn't get it.

Could be a generational thing rather than culture in my case - as I don't remember any of my mom or dad's family doing any sports. My kids seem mostly into this hobby, but they're young and who knows what the future holds? And, to be fair when I got started seriously riding in the early 90s, mountain biking was a weird fringe sport.

Maybe in addition to reducing systemic gatekeeping, being more mainstream and more accepted (I mean, legal trails are all over the place these days!) will help get people interested beyond watching Rampage? I have to admit my Indian grandparents were seemingly preoccupied with what looked proper, could be less of that these days?

Thanks for sharing Sanesh. I liked reading this.

Andrew, I'm into the territory of picking nits here but have each of an 8100, 7100, and 6100 shifter in my household and have a theory about the cable end that was spat out. In your pic it looks like there is a slight taper on the cable end (so it's shaped like =>, rather than =). It looks like probably a Jagwire cable in the pic.

My shifters came with Optislick cables, with slightly more squared off ends. Any chance a cable end fitting situation is revealing itself? It wouldn't be the first range of shifters that's unnecessarily finnicky about details like cable end shape. I remember early 00s 105 and Ultegra shifters seemed to work better with Shimano cables than whatever the shop had kicking around.

I am attempting to attach a picture of a screen cap from the Shimano website.

Hopefully this is validation for the literal years I have spent being incredibly picky about details like this.

Like what casque is saying, I have some scraps of material kicking around I use as feeler gauges - like if you wanted a 3mm narrower chainline you could take a 3mm thick scrap of plastic and see if it will clear, to save a little disassembly/reassembly. I have a few pieces in 2, 3, 5mm thick to test this.

Did a Fernie road trip with my 6 year old son last summer (just the two of us) to coincide with a bike lesson he was doing. We camped, and biked a bit outside of his lesson. I say a bit because it was super hot and we mostly just biked for ice cream, threw pebbles in the river, ate hot dogs, and sharpened sticks.

It was heaven. Can't wait until my daughter is big enough to come along too.

why do you want to teach them to use fossil fuels? they will hopefully live in a post fossil fuel world.

#amajorinfluenced many times here too

He has a sensible way of telling me what I want. I respect that.

I hold that Meat Engine guy responsible for me buying a(nother) spare set of brake pads. Now, he's telling me I need a friction shifter too?

^ I agree with this. I managed to ride the same A-C fork (but different models) in a 51mm offset and a 44mm offset. Closer to 65 deg HA, less obvious. Closer to 63 more obvious change. Like anything on a bike, all the pieces are connected and changing the balance of one thing is just part of the whole equation.

he also said dairy is extraordinarily bad for us and all opinions to the contrary are sponsored by big dairy.

But, what about ice cream? It's OK, right?

I've ended up preferring 29 any time I have a bike that works for 29/27+  and put the effort into trying both sizes.

In my admittedly limited experience, 27+ tires are either flimsy or heavy - with few options in the middle. Havent tried them all though so maybe I am missing something. Maybe a light 27.5" tire with an insert is the ticket?

Hot tip for riding in the cold: Set your Maxxgrip aside until it's warmer.

Not a mullet in the photo but yeah I swap a 29er on the front for trail duty. If you mean the baby, yeah she has the full Joe exotic hair going on but the front is growing out lol.

She likes the bike but she'll like a macride more as she already tries to hold the handle bars rather than stay in the seat but she's just a bit too little. By late summer I bet she'll be keen to head down highschool or Empress bypass on the macride.

If you're looking at Macrides, one thing I added to mine is a Shotgun handlebar. I am operating a very similar vintage of kid on my bike, and she loves having her own handlebar. I have a (new) chalk bag with crackers like goldfish for snacks and a bell hanging off/mounted to it.