I had two of the original Joplin droppers and had zero issues with them during "normal" use. Eventually I had an oil leak, but it was the 2nd or 3rd season in. At the time that was pretty solid reliability. I recall droppers shitting the bed in the first couple months at that phase in their development.

Back when I was riding clipless [Gasp!] I had a bunch of eggbeaters in the fleet. They worked great and were easy to maintain.

I've had a bunch of their multi-tools and not had any complaints.

I never warmed up to CB's wheels, but then I have rarely had an interest in complete wheels generally preferring to buy hubs and rims then build locally. More choice and fewer proprietary oddball parts to deal with.

Any way I'm glad to see they are doing well. I don't run into much CB stuff in my little slice of the MTB world so it was not obvious to me that they'd remained successful.

The HS sold me on 1x back before that was a thing. The high range drag was so bad I ran it in low all the time and then one day realized I had a very heavy/$$ single ring crank on my bike so I sold it while people were still buying it.

If I had a MTB product wish it would be more manpri/capri/long-shorts/short-pants [whatever you want to call them]. I wear them a ton and it seems like they've gone out of fashion in the outdoor clothing world as it's fairly rare to see any these days. When you factor in sizing/fit challenges that makes replacing the ones I have that are wearing out a lot harder than it used to be.

Bird has a nice 505mm steel fork in stock. The landed price in CAD is pretty decent.

The Freeride version of the Zee will shift to a 42T cog no problem with a Wolftooth Goat Link. A bit of an extra cost, but it's reusable so you can move it along to the next Zee from your stockpile.

I had the IL on a Knolly Endorphin. I've got a RS Super Deluxe Coil on the GG. It was really good stock and then I got Vorsprung to custom tune the damper and that made it perfect for that bike.

I had a CC IL spec'd on a frame I bought in 2017. Set the damper to the recommended settings in the CC frame library and just rode the bike for a bunch of years. It was a great shock. Coming on the heels of the previous model's reliability problems I kept expecting it to shit the bed, but it never did.

Having ridden with Niels I can say this bike looks great in person and would suit a wide variety of terrain especially if you are an under-biked leaning rider. If I owned one I could even find a few ways to make it somewhat "weird"! ;-)

Thanks for the review Niels. If I was in the market for a new FS bike it would be a shorter/mid-travel machine like the Fluid. Lots of capability over a wide range of terrain.

I based my size choice using the Ruxton pants as well as their Stage shorts that fit me great as a data point and the RF sizing chart which said the pants I tried should fit me well, but they didn't. I will try a larger size of Indy pant next time a pair crosses my path. I generally have not had issue with RF apparel fitting.

I like the RF Ruxton pants a lot. They fit me well and see regular use on the trails most of the year. I tried the new RF Indy pants in the same size based on the RF sizing chart and I could not wear them comfortably. They felt like a size too small. If you can try them on it's not a big deal, but if ordering online it makes things more challenging.

I let RF know and they may have had some sizing/labelling mix up. I haven't tried another pair to see.

They did seem like well made pants. If they had fit I would have been happy to keep them.

Serious question - has anyone tried kitchen foil under the inner soles in winter?  Does this work?  I've read a lot of conflicting posts on it.

I bought insulated and mostly waterproof 5.10s for winter use. Last winter I added hiking gaiters over them and my pants when things got really wet.

Time to hit up Bonestorm...noticed no one has gone down it yet!

This thread reminds me of how sketchy it is to ride to the trails on snow-covered roads. 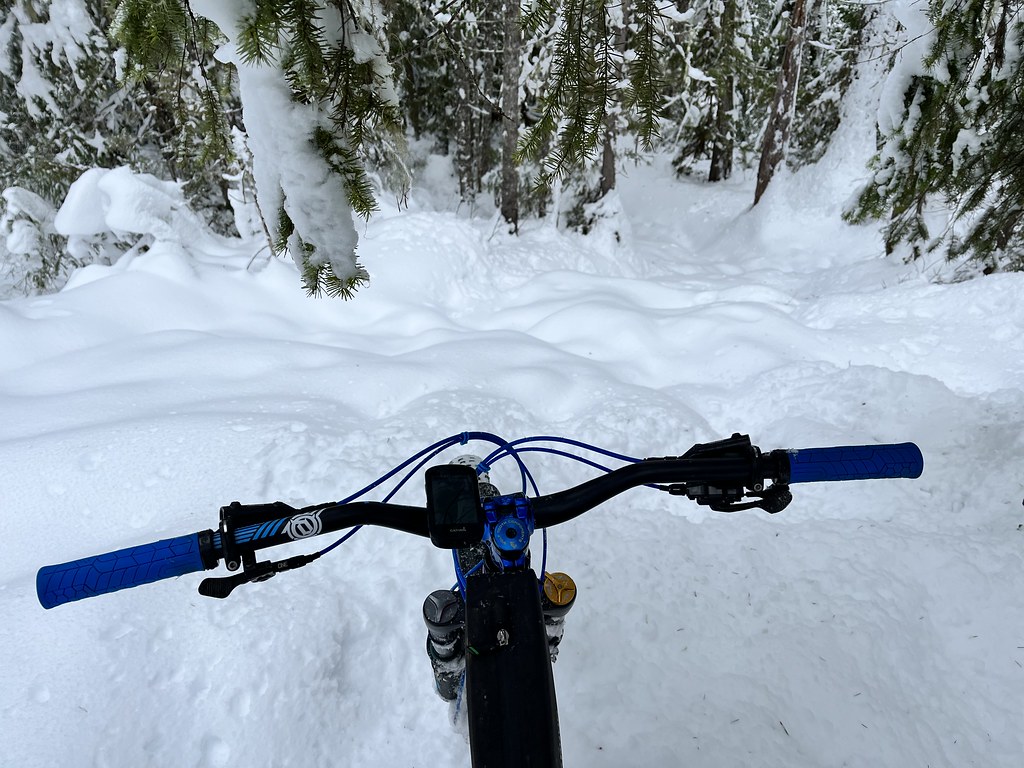 Yes. The snow removal here is roads first....then eventually shoulders/bike lanes and finally sidewalks. So riding to the trails means either riding on the road or in snow on the side of the road. It's not ideal. That said the route to the trails isn't super busy and drivers are reasonable so if I take the lane they don't go nuts and when there is room to pass they do so safely by going in the opposite travel lane. On the really bad snow storm type days I think the drivers kind of respect the fact I'm out there riding a bicycle so when conditions are at their worst I get due consideration. That said I'm riding past a cattle farm 5mins from my door so it's not like I have to deal with big city traffic/drivers.

Photo is from yesterday's ride in Cumberland. That's spicy descent on a steep trail. With a solid amount of snow cover in the open it was a hilarious slide down with my rear wheel locked skiing the bike. I definitely got first tracks!

But, I'm not taking one fucking ounce of responsibility here beyond all the precautions I already take for my safety. I was 100% not at fault and obeying the motor vehicle act, I was fully lit up and wearing bright clothing. My lights are even offset as one is on my bike and one is on my pack offset to the left.

Victim blaming is routine when the solutions for a problem are uncomfortable for the folks who have the power to make the needed changes.

We've been walking, not riding, in the snow every day and this morning was the best so far with blue sky and the snow nicely packed.

Right on. Looks like the snow will be gone by the end of the week. It's been a nice change of pace. 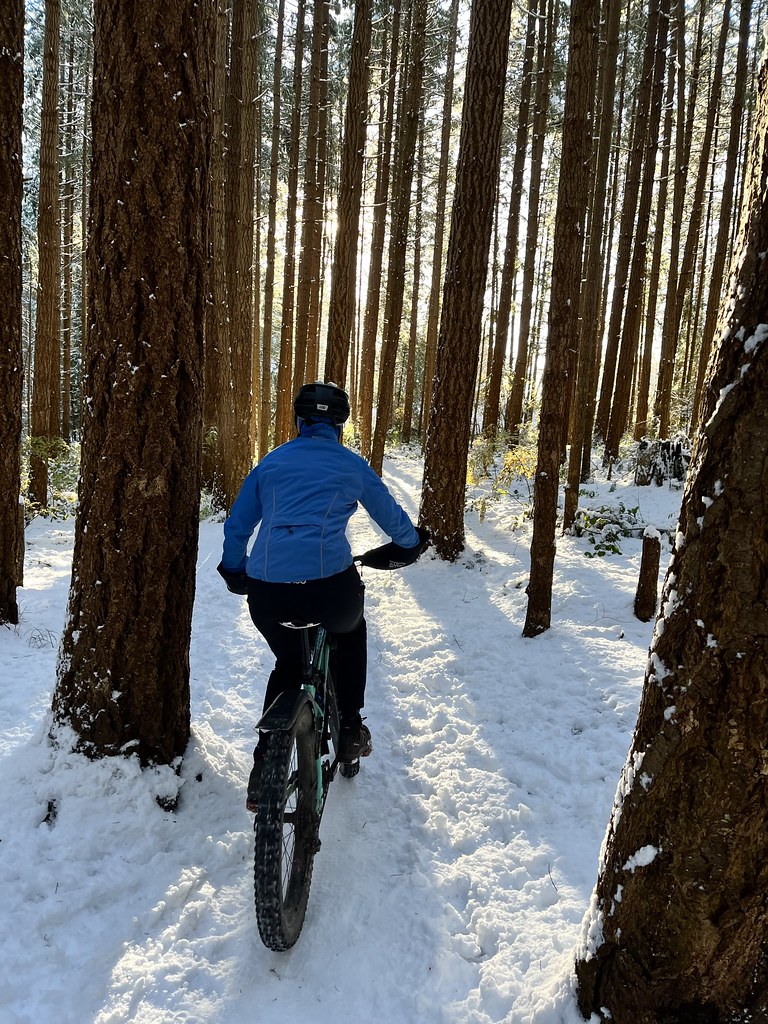 My GF agreed to come and play in the snow if we could wait until the sun was up. 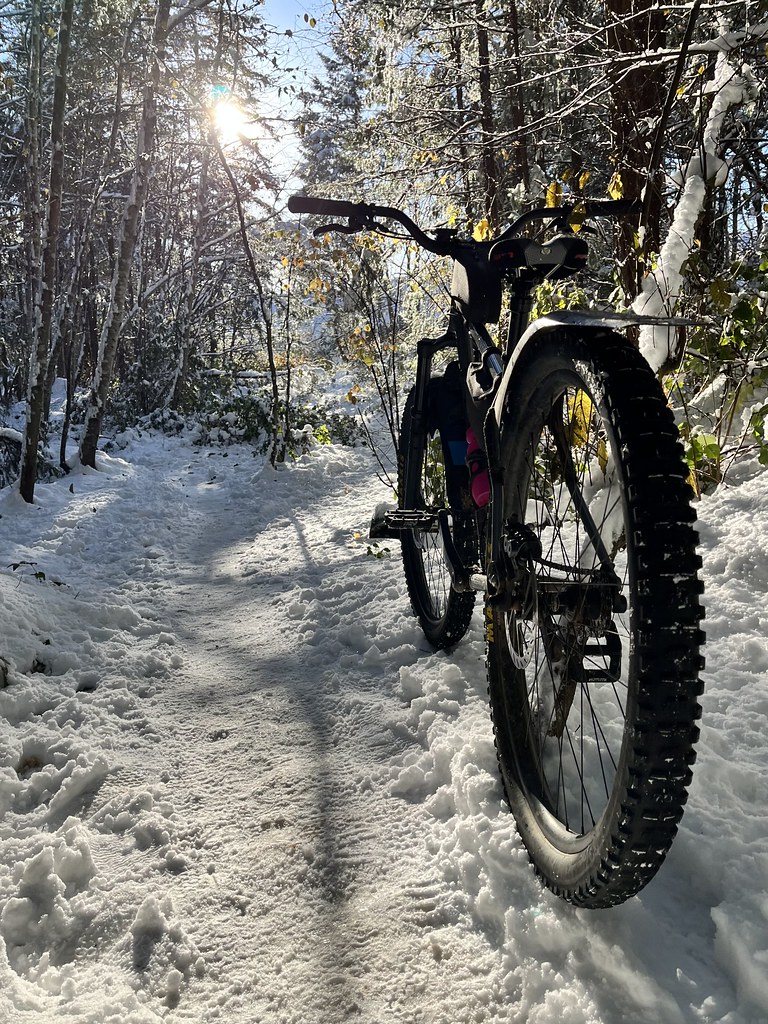 Seemed like a reasonable compromise. The fresh snow was packed down for faster riding. 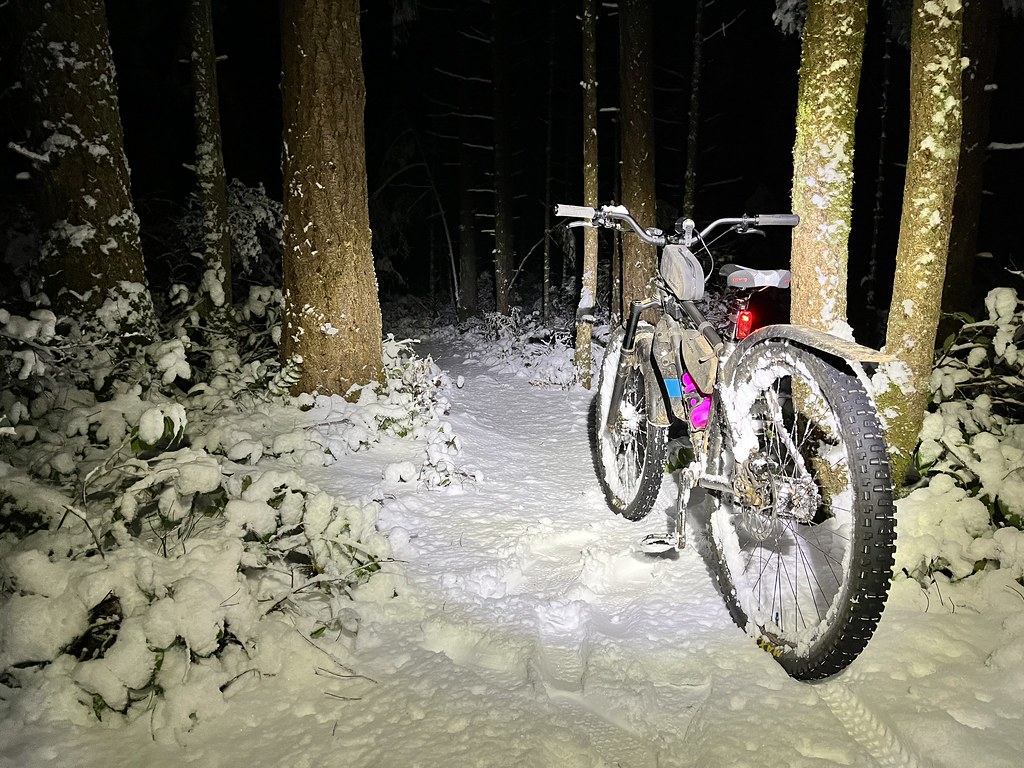 If I had a mountain bike super power it would be the ability to get up and out the door earlier than almost anyone else. With snow falling all night I wanted fresh tracks. Sun rise is late these days so I charged up some lights and headed out. Just riding the road to the trails was uber techy with ice and zero traction slush to deal with. The bike lanes are non-existent at the moment, but traffic was pretty much the same so I rode in the car lane most of the way. 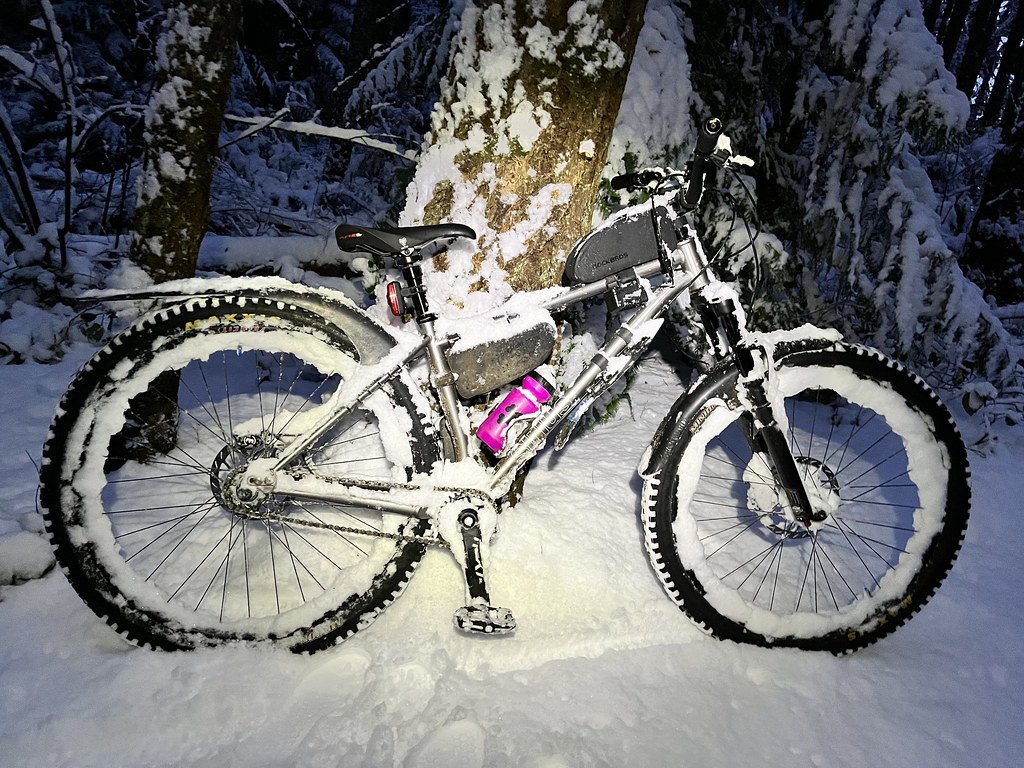 The trails were running well with a few inches of fresh snow, but plenty of traction on both ends of the bike. Since this was a last minute decision my batteries were only partially charged, but that was okay the sun coming up as I got towards the later part of my ride and the snow reflecting so many lumens that my lights on low were fine to ride by. Time for breakfast! 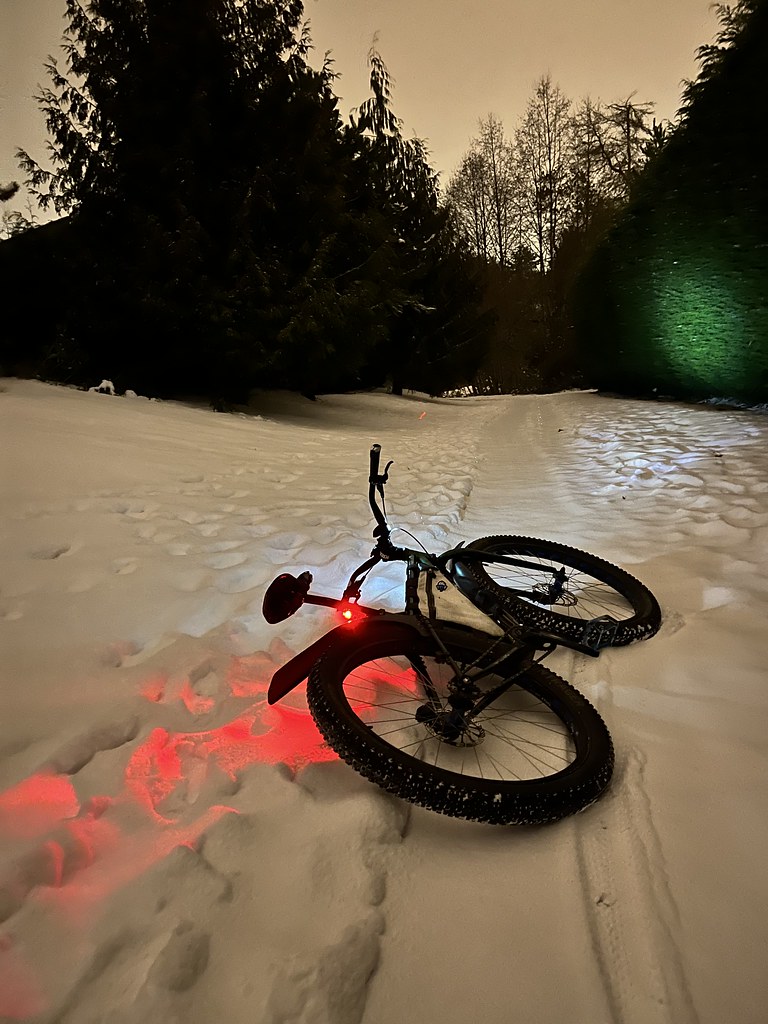 Back home after a couple weeks away stranded in Mega City 1 with no bike. Woke up before the sun. Saw fresh snow outside the window so I grabbed the double hardtail and got out for a spin. Nothing epic, but great to be rolling again. :-) 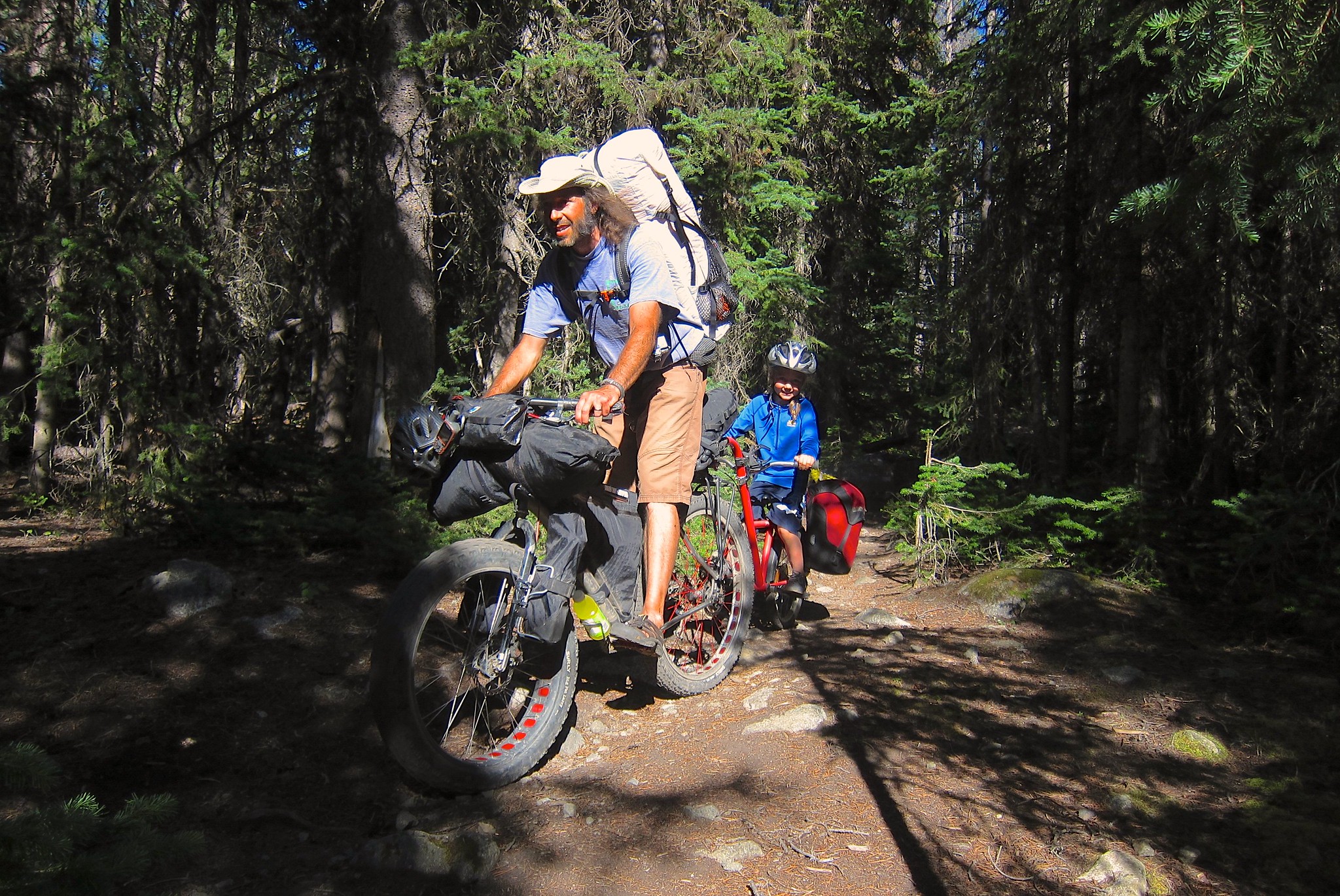 Regarding tough kids....these are my buddy's kids deep in the Chilcotins bikepacking. Needless to say I was impressed by how they just got it done. A little crying occasionally, but a hug and some candy took care of that and they were back on their bikes in no time. 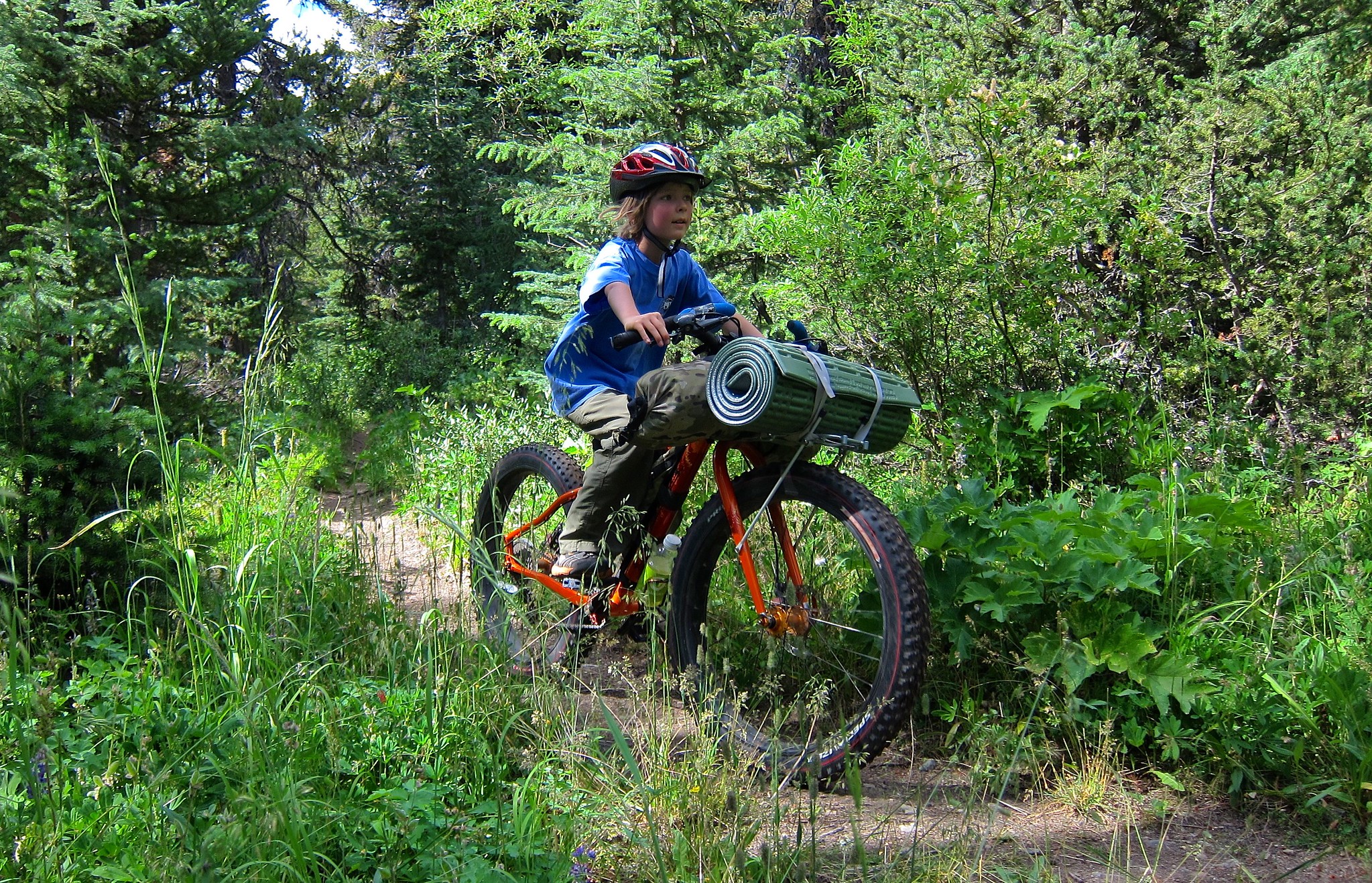