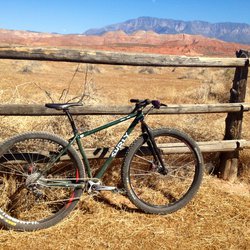 I haven't tried it yet and but I am excited by the trends you've pointed out. I'll give the more progressive geometry a chance one of these days; I keep lusting over the Chromag offerings, so there is a good chance I'll end up with a more relaxed bike, eventually.

I don't think my attitude would change, but I might consider a different tool for the job up there.

I've been running a rigid fork on my main ride since 2003 (Karate Monkey). Haven't ridden the Shore, but I have ridden in almost every part of the US and only on dedicated shuttle trails have I felt completely out-gunned. Over the years I have gone from clipped in with skinny bars/long stem, tires, and v-brakes to flats with 7″ discs, 2.5″ tires, short stem/wide bar. The progression of just these parts on the same frame is night and day. Lately I've been thinking about a new bike, but it would likely end up being another low-tech zombie-apocalypse ride. Can't say I have any desire for 66 HA, but I'd be happy with something a little slacker than my 71.
As much as I enjoy the fully rigid ride I think a big part of my enjoyment is passing folks on the trail and hearing the dismay as they realize what just rode past them…the notoriety is worth the forearm pump.

I had a Yakima rack for a couple years and I can't say I was overly impressed. That this has corrosion and issues after your testing period seems like a sad joke and makes me quite happy with my 3 year old 1UP USA rack. Not sure what shipping costs are like to get them into Canada, but I can't imagine ever purchasing a different rack. A little bit of lubricant every 6 months and it works as smoothly as the day I bought it. With no plastic to fade and crack it still looks shiny and new. With easily replaceable bits and pieces I didn't worry when someone backed into it and bent a bar. One call to 1UP and a new piece was at my door within the week, no charge.

Been waiting for this bike to show up, nice introduction!

One of the best roadtrip edits I have ever seen. Just enough riding to remind us why you were traveling and a good story to boot. Very cool to see your perspective on a section of the country that I've traveled through many times. And you are dead right about Eureka, CA! Northern California is one of the creepiest places I've ridden a bike through.

He got into high end cars and now runs his own company, Roc Euro. By all reports shenanigans continue, just with slightly more expensive toys.

The seat stay was definitely Derkerf inspired. I believe they are stainless steel lugs.

Back in 2006 a guy in Rochester and I were moderators on Pinkbike. At the time I was in college and racing NORBA on a single speed with aspirations to go pro after college graduation. I had some strong finishes in 2005 and 2006 was looking like it would be my time to shine. John Frame (Draco) was welding frames in a friend's warehouse and he offered to set something special up for me. We debated geometry, wheel size, and fork travel for a while, but the plan was always a mix of carbon fiber and high-end steel.

The result was the frame below. We went 26" as I had a nice wheelset I wanted to use and I was already running a 29er and 27.5" didn't exist. We copied the old Bontrager geometry, but lengthened the TT and slackened the head angle by a degree or two. Kept the travel old school and it was built around 80-100mm. John also got the rear end super short (though the tire clearance suffered significantly). With True Temper Ox-Platinum tubes and some carbon seat stays the frame finished up at 3.9lbs.

Unfortunately I overdid it the winter of '06 and, after 3 months of training I ended up in the ER one weekend with strep and bronchitis and an order to stay in bed for a few weeks. I raced Sea Otter that year, but didn't finish and with graduation from college looming I put away dreams of making it back to nationals that year. The bike made it with me on my move out to Rochester, NY where John and I were roommates for a year. The parts on the original build got sold to pay our heating bill and after I moved back west the frame ended up in a New York basement for 10 years.

Well, I finally got the frame back this summer and spent a few weeks searching out parts for it. It is a mix of throw-back and modern with a Z.2 BAM, Formula Oro Blanco Branks, Hope Pro II Hubs on Stans Flow Rims, XT/SLX 1x10, Chromag Saddle, Straitline AMP pedals, and moderately wide handlebars. All said and done it is a hair under 24lbs. The geometry is pleasantly modern, but not so slack that it is boring to ride. It is nimble and fast with a front center that is long enough to stay stable when things get fast. The rear end won't accept anything bigger than a 2.0" tire, which is my one complaint. Otherwise it has been a blast to rip around on these last 3 months.

Anyhow, here are some photos of the thing. 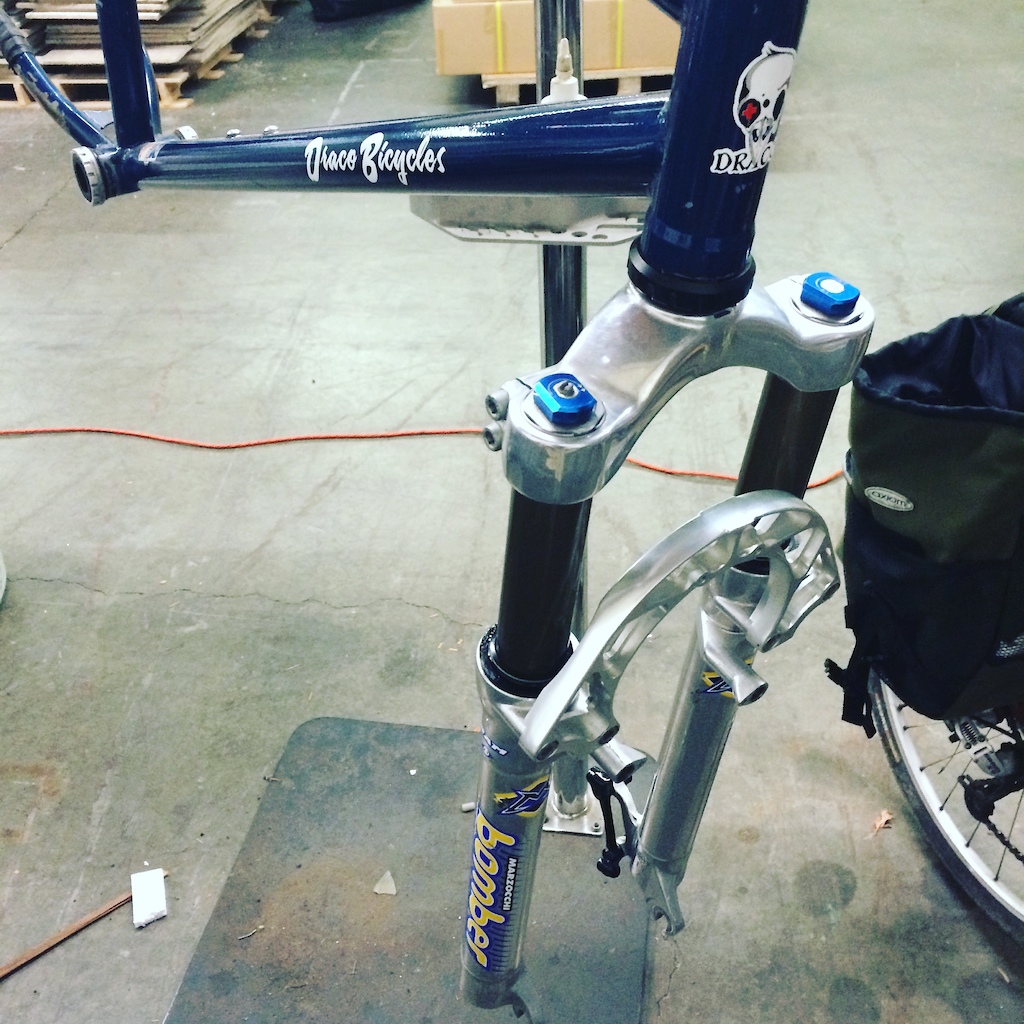 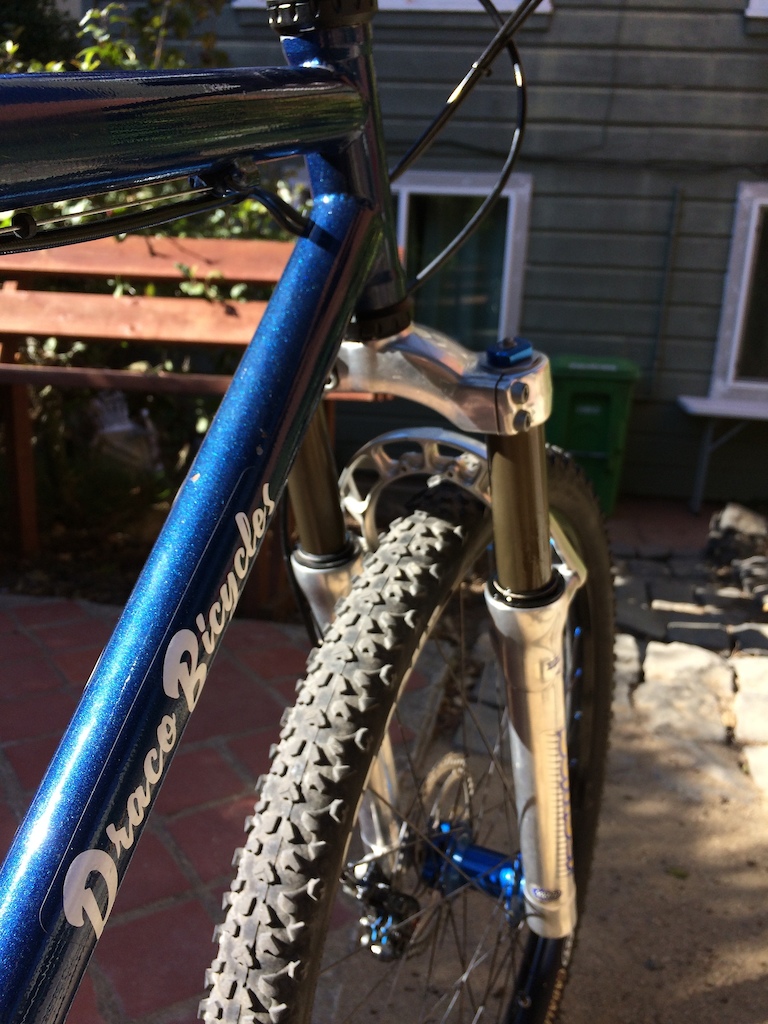 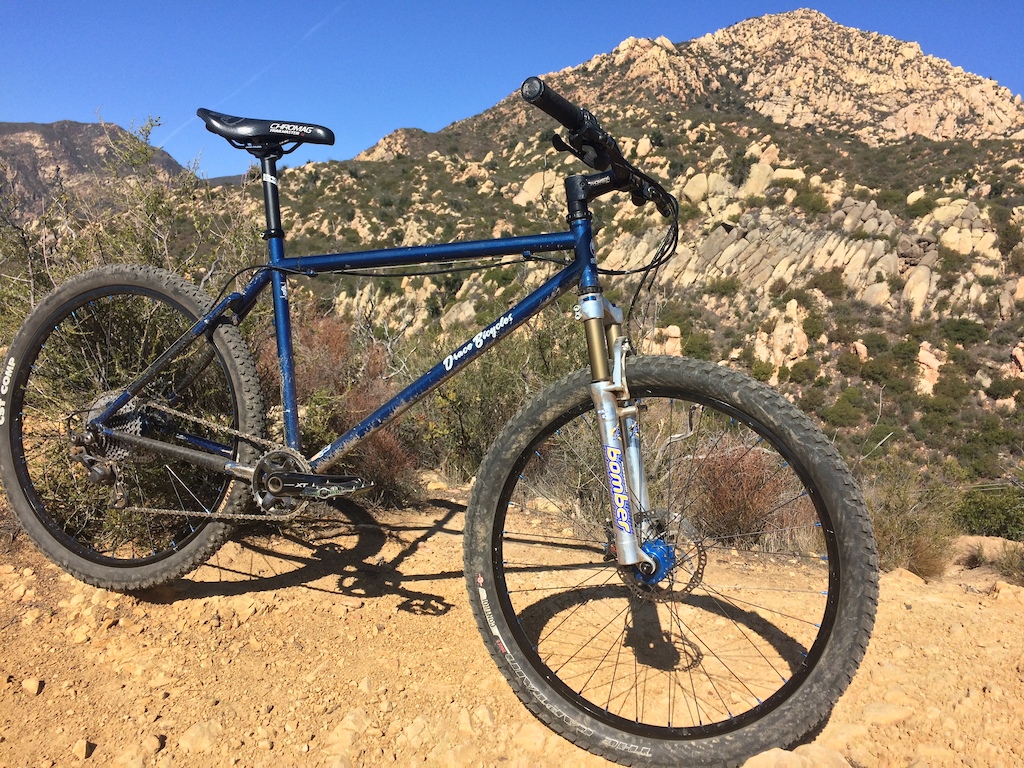 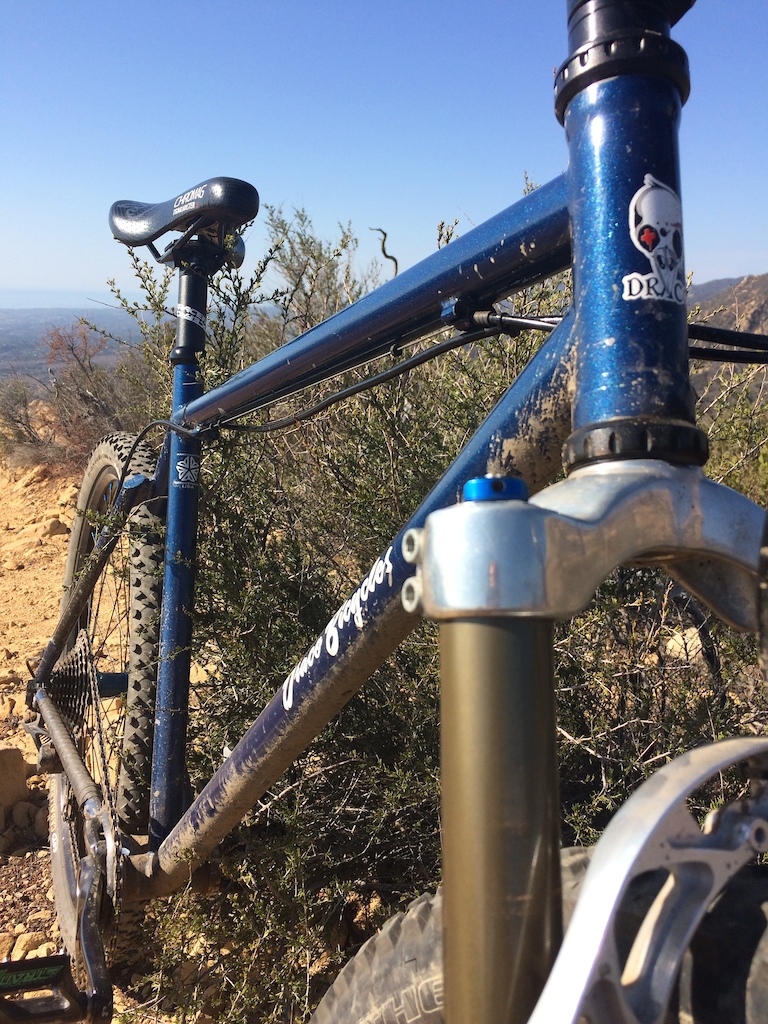 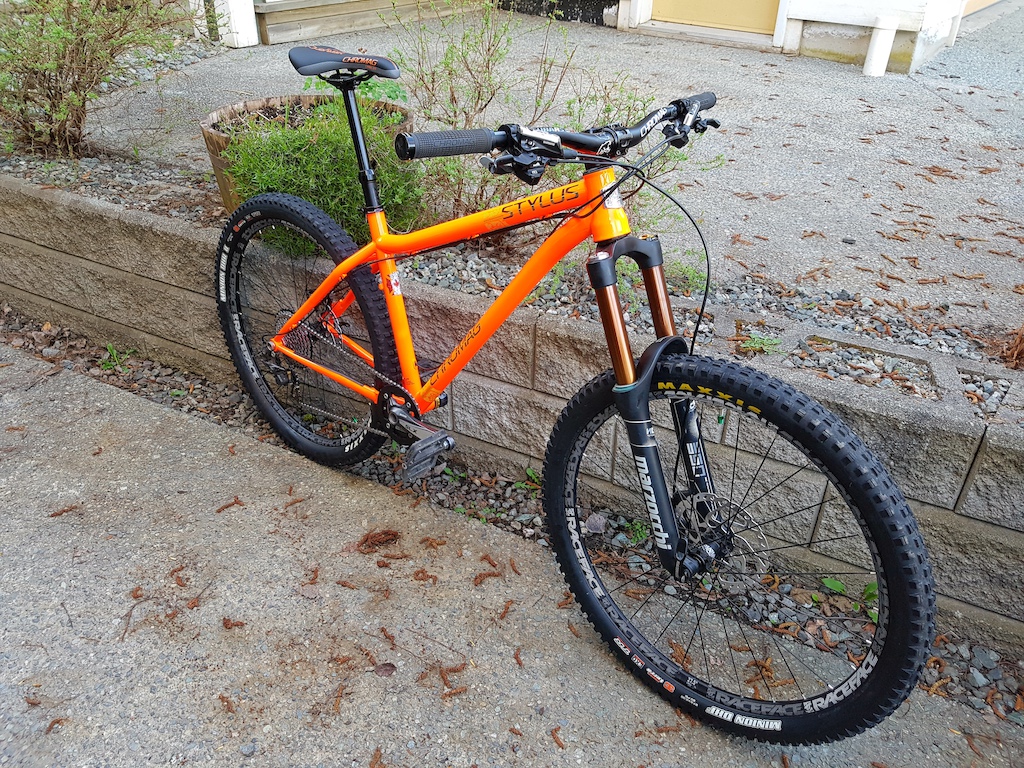 Particularly, I would love an XC-Race-Like 4" travel 29'er with a slack headangle, long front center, and short(ish) rear center. I have a feeling it's coming and I can accept that it's Plus bikes that are going to make it happen.

Banshee Phantom? Seems like it fits those requirements, no idea if it is PLUS compatible though.

Will all this crazy traction we'll all want to climb up the green/blue descents.

Personally I'd like to see a 2.5/2.6 with some good sidewalls. Tires like the 2.3 Butcher are good, but some more volume would be nice without going all the way to 3.0 and flimsy sidewalls.

I've been running 2.4 Continental Mountain Kings on my 29er for a few years now. I upgraded to them when I got tired of cutting sidewalls on the limestone in southern Utah. They are heavy-ish, but the stiff sidewall and wide profile provide a ton of traction. Definitely made a big difference in my riding style when I got them. Takes a bit of work to dial in optimal tire pressure, but worth the effort.

I'm not sold on the + trend, but haven't really given them a chance. Mostly I have no desire for a heavier tire than I am currently running and I dislike the idea of going back to a lesser sidewall.

Anyway, the Mountain King gets my vote for big rubber without officially being +'ed.

Ball of foot to mid-arch, but I ride a singlespeed and move my feet around a lot.

Been riding 27.5X3.0 tires for about three months now on a hardtail. Gotta say it's upped the fun factor a ton. These bikes will not replace full suspension but they will appeal to entry riders or people like myself, veteran hardtail riders who are looking for something different. I'll try and post some photos of the bike when I have a chance.

I'm curious if you could share some more information on your experience. Been looking at the Instigator from Surly as a way to change things up from my Karate Monkey. Been wanting a more aggressive hardtail, but at 5'6" the tall front end of a 29er with 140mm of travel seems like too much.

I ran into the maker of these packs a few months ago in Zion. He has been selling a bunch to trail runners up in Jackson Hole. They looked goofy and I gave him a hard time for carrying bear spray in Zion NP, but it might be a good solution for you.

He also seems to like fiddling with design, so if you want him to build an "Enduro Belt" I am sure he could accommodate.

It's funny. My paradox feels a lot more nimble (yet stable) than my previous trek 26er hardtail (which had old-skool geometry.) I think short chain stays and a bigger bottom bracket drop (as well as slacker angles) results in more fun, no matter what the wheel size is.

Slightly longer wheel-base means a much more stable ride. That and a relatively lower BB compared to a 26" wheel adds a feeling of quickness to that ride. Modern geometry helps, but part of what you experience is just the benefit of a larger wheel.

That being said, the early (2004 or so) FS 29ers I managed to try out were boat anchors and handled horribly.

My Karate Monkey, sporting gears for the first time since I bought it in May 2003.