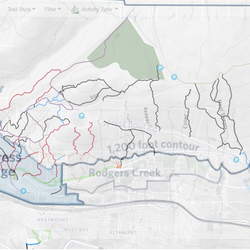 I rode with a guy from Norco on Cypress who I just bumped into back in the deep Covid days. He was basically riding the Norco Shore as he was testing. I asked him what bike it was as it was blacked out. He told me, then I asked no more.

My 7 year old daughter wears Mums elbow/arm pads. She also has a pair of my really old pedals on her bike. The type from way back in 90s where they were small and not that grippy. It's a great solution for her.

Steve's an animal on a bike. Watched him attempt a backflip on a considerable huge jump and fail. He dusted himself down and hit it again perfectly. So modest with it too. Great vid to watch and listen to the breakdowns.

CQ - You could say the same thing about the SJWs - shouting on the internet on how unjust everything is but not doing anything positive about it.

Thanks Tim. Maybe I will make a trip this year. My main beef with the pricing is that if COVID disappeared tomorrow and all was back to normal I'd bet that the prices would remain the same.

Do you know if the sampler pass is still available? It was a staple in my family with younger kids and wife wanting to ride but not for the whole day.

Yeah loved my milk levers until I left them in Europe after a bike vacation.

The new Pedro's are great too, but snapped one recently after 6 years of use. Hope the quality is still up there.

Yup. More and more people are going to be squeezed into a smaller and smaller area.

If only the boarders had been closed way back in Jan we wouldn't be in this mess. New Zealand is the only country that seems to have got it right.

The dude doing the Toonie drop was Andrew aka Trail Slayer. He was on a SC Nomad. He's a sick rider so no surprise to see him drop this.

I don't think we will see someone on a high tower doing it soon.

When did this all happen? Perhaps he 'borrowed' one of these riders water bottles :)

If its harder than Chossy then wow! That trail is a serious head scratching workout.

There's another question you need to ask. Where does the fabric, velcro, zips etc come from? Just because the clothing is made in Canada doesn't mean its 'free from __'

Wish and Ali maxxis are legit. They source them from maxxis se asia. Btw tyres and shimano stuff cost nothing in se asia for obvious reasons....

Regarding the jerseys, I wish the counterfeit vendors would sort themselves out and make them in western sizes. I find asian sizing so unsuitable at 6'5". They have some comically laid out jerseys covered in the most random logos that I would use for the sheer humour.

Well I gave them a spin on the DJ bike before the rains hit. They were great. A guy mentioned that these tires weren't available in this country yet. I just gave him a sly smile ;)

After the near death experience of losing one of my bikes the other night and the thought of replacing it I realized that I would easily have to spend about $700-1000 more than what I paid for it to replace it. It got me thinking about the value I've gotten out of different bikes over the years and which bike gave the biggest return for what I paid for it. Hands down that award would have to go to my SX Trail that I rode for almost 10 years. Currently I would have to say the carbon Instinct I picked up used for $1800 has been over delivering in the smiles/dollar category.

I'm with you on the SX trail.

I rode XC, dirt jumps, Freeride, DH races and Mega Avalanche three times and it still kept coming back for more. It finally died in Whistler when after a good crash I bent the rear chainstays. I'm still yet to find a similar pedalling bike that I feel as good as I did on the SX. But that may be just down to the age of my old bones.

So Halloween is just around the corner. With Covid surging what are the parents on here doing? My 13 year old girls are pretty bummed that it could be a bust. Are you letting the kids trick or treat? Are you handing out candy? I’m only just starting to think about it.

We are cancelling Halloween, Thanksgiving, Xmas, Easter, Birthdays and any playdates for our kids until this thing is over. It's terrifying what's happening out there! ;)

I've just ordered some Maxxis dirt jumping tires on WISH - similar knock off site - $50 all in. No confirmation of postage yet. Delivery time a month or so. I'm hoping they turn up before the end of the summer so I get to have a few spins on them.

These just turned up. Just over a month from ordering. Look and smell like legit Maxxis rubber. Will probably order again when not in a rush.

Do you guys wear pants when climbing or just for shuttling? I've always assumed that I would overheat super easily if I tried to wear pants on a pedally ride, even in the middle of winter.

Mine are great for climbing too. Not overly hot.

I picked up a pair of Leatt DBX 4.0 Pants last fall from Jenson. Not particularly waterproof but a nice fit and easy to pull off at the end of a ride. Sizing is on the small side though. I got XL and I'm just under 6 foot and they only just reach my (K)ankles.

The big plus about pants in the winter is that your legs aren't covered in mud at the end of a ride. So swopping into another pair of pants is straightforward.

I'd like to see an option where you could travel outside your 'area' and download the area that you were currently visiting for a small fee (for a limited time).

Because let's be honest. How many of us need a map of the whole of BC? I'd guess the majority of riders only leave their riding area a few times a year.

The full world map is always available on your computer, the limited map area is just on your phone. The home zone is a 60km x 60km square, which kinda sucks if you live in metro Van considering places like Pemby, Whis, SSC and the Valley are all potential day rides and would be out of your home zone. A pay to play option would be cool so if you go to Pemby for the day you could say pay a $1 and you'd have access for 36hr or something like that. That would be a fair compromise IMO for the occasional day trip. If you go more often then it's worth it to opt in now at half price and pay the $1.50/month or whatever it works out to.

I think that's why they set it at that size :)

I just don't like paying for something that I wouldn't honestly use that much, having kids limits my day trips anyway, so a pay-by-use option would work better for me.

I'd like to see an option where you could travel outside your 'area' and download the area that you were currently visiting for a small fee (for a limited time).

Because let's be honest. How many of us need a map of the whole of BC? I'd guess the majority of riders only leave their riding area a few times a year.

I've just ordered some Maxxis dirt jumping tires on WISH - similar knock off site - $50 all in. No confirmation of postage yet. Delivery time a month or so. I'm hoping they turn up before the end of the summer so I get to have a few spins on them.