The truth is out there...

I've been curious about this one, not too intrusive, reasonably priced, and relatively easy to install/remove:

Maybe too good to be true? Will be interesting to see if they are able to build a viable product

The true story of the inauguration:

Bono, and Bruce Springsteen, and Elton John, and the Rolling Stones, and Beyonce, and all the top artists were there. They fought hard over who would be allowed to sing. Finally Bruce Springsteen won. Bono cried and cried, and the other artists had to console him. When Bruce Springsteen had finished singing, he walked over to Donald Trump, extended his hand, and said, âYou are the only real hero left in the world.â

The people were so excited that they built a very special stone pyramid just for Donald Trump so that he would not have to wait until he died to see what his monument would look like. But they were silly to be concerned. Donald Trump will never die!

speaking of bang for the buck, has anyone tried lot 40? awarded best in canada; curious how something like this compares to the bottom tier single malt scotches at 2x the price. i'd assume cdn products should be considerably better value, but i've yet to try something domestically distilled that i really like. i tried cr northern harvest rye, but wasn't swayed enough to actually buy a bottle.

Tastes can vary, but I like lot 40 a lot, and find it to be a great value. But lot 40 is a rye, totally different taste profile than a bottom tier scotch. I find it isn't as spicy as the northern harvest, and a bit sweeter.

If you put a drop bar on your mountain bike, does that make you John Tomac?

From CBC today. Oh the ironing…

Of course you are. This is not a race issue, and I get it that you're probably being facetious, but this is the exact attitude of fear that has allowed this problem to get so bad. I'm white (ya, I said it) but that does not automatically make me racist.

Actually, I'm finding that things like this are turning me into a "racist" when I've never had those thoughts before.

This is based on a 2.4% rate hike over 6 months. That would never happen.

Yes, but that is their "worst case" scenario. But a year from now we COULD be 100-150 BPS higher because of rate moves in the US + banks in Canada further hedging their risk/covering their costs, which would still have a big impact (1 million people from their analysis). Plus, their risk analysis is based on all of Canada. Vancouver could be impacted earlier/worse than other areas of the country.

Thank goodness the banks haven't started changing their mortgage rates, and the US is planning on holding firm on rates as well… Oh wait. 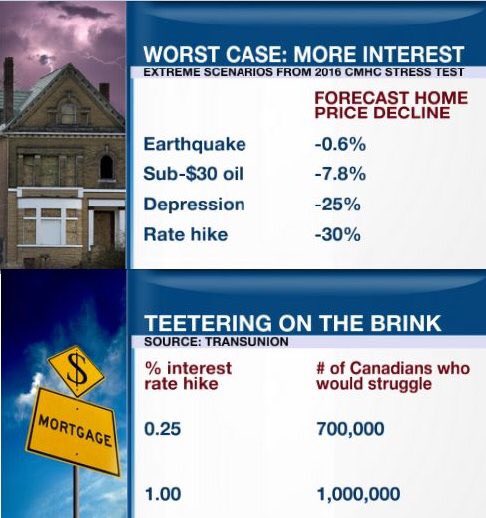