Other than their social media, Suntour hasn't published anything about the coil shock anywhere. I'm also eager to try one!

Per this thread on MTBR the only difference between the 210x50 and 210x55 shocks is just a spacer, clipped on the main shaft, right behind the end stroke metalic washer: 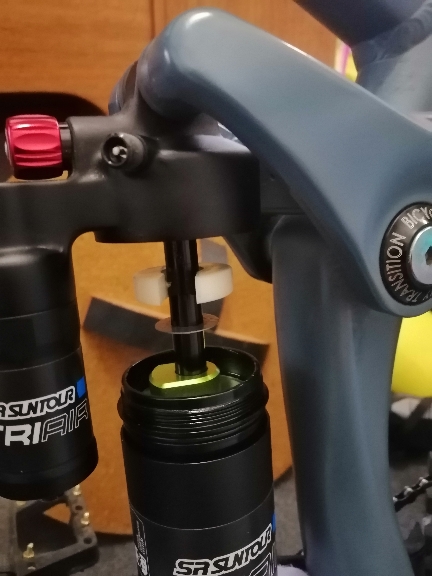 In the thread the procedure to lengthen the stroke is debated, so I guess the reverse operation should be equally simple. You could machine/make a 5mm spacer, clip it behind the end stroke washer, and call the day off.

I have been using this shock on my Orbea Rallón R4 since July 2020. Since there were very little pieces about it on the net at that time, at first I went by Vital's review to find my base settings, but the shock always felt overdamped in the rebound front. I felt like I was always waiting for it to spring back when I preloaded the bike to bunny hop or take off on jumps. A side note: I'm not positive to riding a shock with the slow speed compression lever in any other position than fully open, except maybe for flow trails.

I even discussed this with Suntour's official US service reps, and they told me it was a weird, very uncommon thing and offered to revalve the shock for me if I was willing to send it over to them. This was a big no-no for me, given I'm in Argentina, and the shipping charges and customs fees would had ended up being more than what I paid for the shock.

Then, after some more riding, it started to loose itself until I ended up moving the rebound knob a couple clicks back from fully open. Adding a couple bands in the positive chamber also added to the mid stroke support, and now I feel like I have something to push against when preloading the rear suspension, but without losing the exceptional initial stroke sensitivity.

I've also found that as the Vital review recommends, the resi pressure could be used as a half-step spacer in the positive chamber: It does not affect the end stroke progression as much as it does with the mid-stroke support.

Time for another side note: this shock isn't just a close relative to the DVO Jade, but also a lost sibling to the Rock Shox Monarch DebonAir. In fact, it shares more with the SRAM unit than it does with the DVO one (if not for the DVO green inner bits).

All in all, I like the TriAir a lot. It's a pretty well composed package with a very good price. It might take some time until it begins to shine the way it should, but as Andrew points out, the simplicity it demands when servicing time comes makes it an option worth considering. It's also perpetually on sale on some European sites, so you can have a very good shock at an unbeatable price.

If you look at SR Suntour's instagram you'll see a lot of ambassador/sponsored riders' bikes already sporting the coil version of this shock.

It was supposed to be available to the masses on 2020, but I guess the Coronaggeddon delayed its debut as it happened to many other products.

In NA I've seen several cases of shifters being completely replaced on warranty claims. However, faulty kit is a big concern here in Argentina, as there is no official representation and warranty replacements are a no-go from scratch. This makes any repetitive failure to be wildly known by the biking community in a short  time, and gives bike nerds something to research about in native and foreign forums.

Hey Drew, as Jan correctly points below the surface finish of the plate axle is where the old gruppos differ from the x100 ones. One of my best friends has a bike shop, and we normally have wet winters here in Argentina. Stream crossings are normal when you ride in our local trails (nothing extreme, just a couple splashes and the water never gets to BB/hubs heights), and as a result most of the 12sp RDs end up with equally corroded pulley cage/clutch axles. I've heard of the clutches coming too tight from factory and almost dry, which would surely contribute to the  premature wear on the plate axle because of water ingress.

I read at PB Shimano was shipping either new derailleurs or a replacement kit consisting of a new clutch cover, a new rubber gasket and the necessary screws.

Re. failing shifters: I will try to find out which brand of cables were used, but most of the ratchet issues I heard/saw happened on complete bikes, or in shifters purchased aftermarket, with their original cables already threaded in. However, the failure I'm describing isn't like the one you experienced. The one I brought in consists of the tiny spike/ratchet in the downshift lever becoming unable to grab the gear indexing plate because its tiny return spring is either too weak or breaks entirely, leading to a no-downshift shifter: You just push the downshift lever, but it never engages the indexing plate.

Drew, the shifter issues aren't just happening to Deores. XT and XTR ones have issues with the downshifting ratchets. Also, derailleurs of all the gruppos have poorly sealed clutches which lead to water ingress and seizing, and rear hubs bind and skip because the ratchets loose lubrication.

It might beg to wait for a new iteration, as first and second generations of every single bike product seems to be a beta version.

157DH creates symmetrical spoke angles. SupahDupah157Boost™ doesn't. It's a gimmick trying to solve the inherent weakness of 29 inch wheels, and it fails to do so, adding also a wider rear end.

So there you have it, we need to kill Trek before it lays eggs. Preferably with fire.

Well, I can't reply to you directly for some reason Drew. I'm not stating they "suck when compared to all of the other brands/models". I guess I'd like them to be updated... A bigger diameter master cylinder for instance, or some leverage magic... I don't know. Their quality is superb, as you know. They just got a little underpowered for the big wheels and fast speeds this new century has brought upon us.