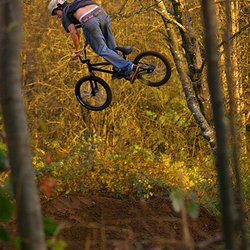 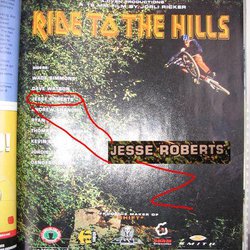 Title: RIDE TO THE HILLS
Posted by: Action-Hero

that guy has flowers on his arm!

Well Andy's sure has changed.

….man I really wanna go there and Sea Otter!

that drop looks rad for learning tricks….. is it pull your bike up and drop off style or is there a way to ride on?

Is that right by that huge boulder drop?

I know that guy, he's a problem drinker.

That's basically one of my favorite photos ever, and I bought &quot;Lunch on a Sky Scraper&quot;!

> he's really cramping my style with that bandana. i don't like it. but the trickery is nice.

you have horrible style, and you're a claimer!

I've got a few good stories about this guy. The funniest one was probably the year that Jeremy Levin and I went down to sea otter. We heard that Dan got denied at the boarder when we were leaving town. Once we got to Monterrey RH told us he was arrested by trying to sneak around and go to another crossing. Of course this wasn't exactly true, however RH was arrested a day or so later when he hit a chick with a chair during the infamous "Bike Magazine Awards" chair fight…… you can't give Canadians free booze….

More so about Dan; That guy is gold. I'd get calls at midnight the day before on of his shows, "Hey dude, we need a rider, so and so bailed!" I'd tell him I was in no way capable of riding that skinny stuff and that he should call Ian Moult. His response was usually something along the lines of. "No man! We have dirt jumps! and you can do tricks off the drop! It's got a lip!" I'd get all excited and rush out the next morning and ask him where the dirt was….. "It's in the trailer! we have to build it!" Wooden landings….. usually with a skinny before it. fml. Twice he got me.

I doubt he's going to apologize for dropping in on LSD for the duration of his punishment either.

I haven't seen someone die like that since Crispin Glover on Letterman.:deadhorse:

Good to see you still have your sense of humour, Nelson….

it's no Georgia straight…..

Does the babe come with the hoodie?

Can I have sex with it?
:lol:
Nice bike!

You wouldn't want to do that. This is the kinda bike that you'd wake up too running out with all your cash while you're handcuffed to the bed.

I've seen it happen before.

Whatever happend to Dustin Adams? Wasn't that guy like the greatest Canadian downhiller who ever lived? Why didn't Jamis sign him instead?

good point, i bet she just canned herself so the images of her would stick in our minds instead of fade. like Cobain said, its better to burn out than fade away.

That's so definatly not originally Cobain's quote by a LONG shot. Get your references straight melon head, the deceased are spinning and PISSED!

he's a scot? This is the first I've heard of this non-sense.