“Extra points were given to the solid contingent of hardtailers and an ongoing contest for the heaviest bike kept the vibe low-key, but make no mistake…”

The Art of Getting After It

She was completely alone, apart from a small pack, a six hundred dollar hardtail, and pair of Ray bans for company. She was representing the true essence of getting after it…

And the Norwegian hardware goes to…

Claudio’s done it again. Sideways Brendog, near-crashes, bare bums, and lots of cheering in this one… 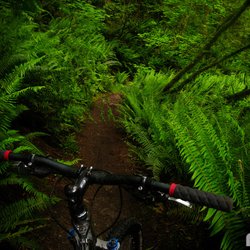 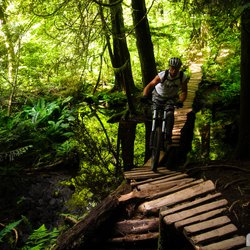 Come on now. Omar consistently wrote the longest reviews when I was doing the editing here. Perry still takes the prize for most wordy words. But yes, my most recent work does surpass even Omar's wordiness. Hah!

In extreme low traction situations, you are more likely to end up in the pressure range where you toe the line between grip and autosteer. My problem with lowering pressures to the point of extreme autosteer is my rides are rarely on just snow.

My fat bike is my only mountain bike with a suspension fork right now, so I ride it in all kinds of conditions, all year. At this time of year I climb from my house on pavement and dirt up to trails that may or may not be snowy. So that said, I prefer to keep my tires at slightly higher pressures that are suited to a wider range of conditions even when I'm in lower traction situations. I'd rather a tire have reduced traction than exhibit autosteer.

It bears mentioning that some tires exhibit extreme autosteer at pressures where others are just fine. Tread pattern, casing shape, and durometer are all factors. Because we're toeing that line between grip and autosteer, bad tires stand out. And if your tire exhibits unwanted characteristics well before the casing is folding, you're having a weird ride every time. Lots of fat tires out there now, none of the good ones cheap...

We bought the Shimano PRO Team Digital floor pump within the last year and it's been good for this low range of pressures as it's accurate to the half-degree. Until this one fails, I don't feel the need to try anything else.

I've tried the Schwalbe and the SKS portable ones and found the readings to vary wildly between samples. That alone made me hesitant to even use them, so I can't comment on their day-to-day consistency, which is far more important than the actual readout.

Before buying this PRO pump, I looked into the analog Accu-Gage a number of times, but the cost of buying it out of the US was prohibitive. It would, however, be nice to have a trusted analog control.

The best thing about my experience with suspension on a fat bike is that I'm able to run more pressure in my tires, negating fat tires' tendency to autosteer at low pressures. For a 4" tire I'm talking like 9 psi front, 10 psi rear.

Many people run their fat tires with less but I can't stand the unpredictable handling, even at, say, 7 and 8 psi respectively. Of course, that's a 20% difference in pressure, which would make a tire of any size fold and autosteer. Imagine running your 2.3s that you'd usually put 23 and 25 in at 18 and 21 instead. No bueno.

Suffice to say, a pressure gauge that's consistent at pressures below 10 psi is crucial to get the most out of a fat bike.

On the wheel swap topic, we built 27.5+ wheelsets for both of our fat bikes, which allows us to run 2.8s or 3.0s. I feel like this is a more natural step than going all the way to a 29" wheelset with narrower tires. The 27.5+ wheels from Stephanie's Surly Wednesday will fit the Bucksaw, if you want to give them a go sometime.

Sorry, but you're still wrong. And fortunately someone has published about this exact comment from within the bike industry, just today:

Yep, the basic Beto head. Hose diameter is the same.

After trying out Lou's Shimano Pro digital floor pump at Obsession, we ordered one for home, as we have plus bikes and fat bikes that our old pumps weren't accurate enough for. The head was initially good in use, but the presta side of the head lost its ability to hold on to valve stems after only a couple months. I was happy to find that the spare Beto head that I had in my tool box (best $3.50 you'll ever spend) went on without a hitch.

Thanks, Pete. My next on-road build will definitely have the new Sinewave Beacon dynamo light. Not sure if it's completely worth it for off-road applications.

The stem cap USB charger needs to be paired with a dynamo front hub to make power. We have these on our commuting bikes, which we traveled on for 3 months last year. It's really nice to have full time, permanent lights on our everyday bikes. For modern mountain bikes there are two options on the market for 15x110 hubs, both weighing about 480 grams, and starting at $200 USD for the hub without wiring.

While the hubs start making power at 3 mph, they don't put out enough consistent voltage to charge a smart phone or GPS until you're going about 8 mph. You can trickle charge a battery pack, but that adds more weight. For this reason, and the fact that running wire from the hub to the steerer on a suspension fork requires solving the problem of a length of loose wire, people rarely run dynamo hubs on suspension bikes.

So dynamo systems are currently better suited to bikes that spend more of their time going road speeds (randonneurs swear by them), but options are coming for those of us who spend more time riding slowly (or pushing). Just this year, the first hybrid battery/dynamo light was released (by Sinewave, the same company as the USB charger). 700 lumens, and you get full power all the time, thanks to the battery. When you get moving again, the hub trickle charges the battery pack. Pretty cool!

Not only did Kaz shoot and edit this video, but he also created the audio himself. Hell yeah Kaz!

big stupid is the wrong name for the trail, it's actually skull or upper skull as a lot of people say seeing as the trail is split by the BP. trailforks has the name wrong for some reason.

The trail was renamed Big Stupid when Digger redid that section of trail, coinciding with the DNV's signage project in 2011. It makes sense to me because this section of trail doesn't actually end at the top of (Lower) Skull. While it was often called Upper Skull by locals, was the trail actually on a map with that name? Asking because I simply can't recall.

Definitely lighter than the seven spokes inside my seat post!

The 9-tooth jump on the Shimano 11-46 is huge, but if it's just your Old Buck bailout gear, maybe you think that's OK!

This topic is actually completely relevant to our lives, as we've recently moved back to Lynn Valley and plan to stay for the long term. We rarely use our car, and travel through this area regularly. The cycling infrastructure is sporadic to say the least, and we will be at these meetings to find out what the specific plans around cycling are with the project.

Right now it's a metre-wide wooden bridge crossing the creek that goes right next to the last house at the top of Riverside.

It looks like this also means they'd be restoring the closed section of Fisherman's on the east side of the river, and hopefully our access to Bottletop! The vehicle bridge at the north end of Riverside would indeed not cross the Seymour River, but simply allow access to the east side of the new pedestrian bridge.

I'm sure it's time for some big tires now that you've gone flat bar. Nano 40s?