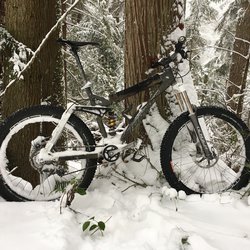 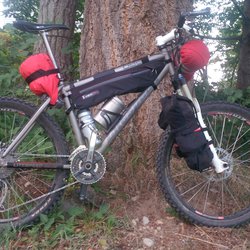 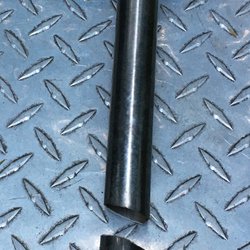 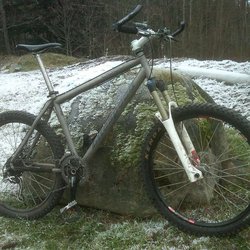 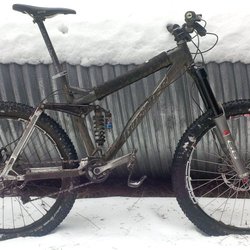 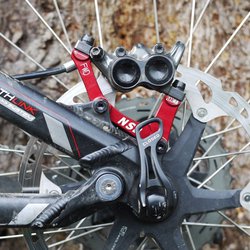 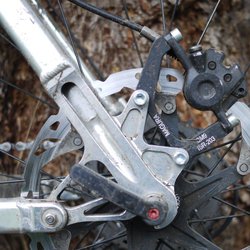 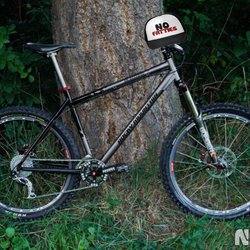 Title: Only Steel Is Real
Posted by: WeTYC... 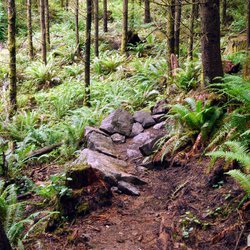 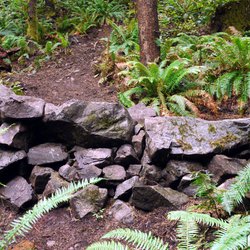 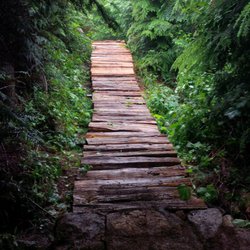 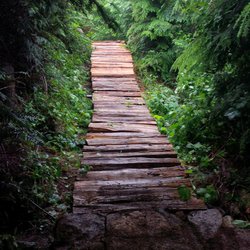 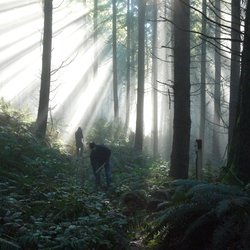 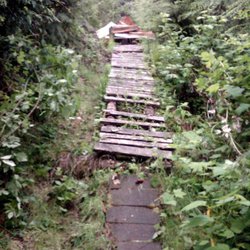 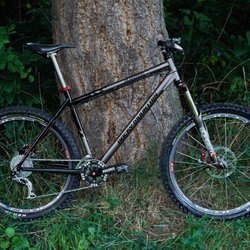 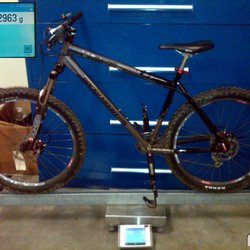 Did anyone else see the title image and wonder if the person with their back to the camera was actually Manservant Hecubus?

I'd much rather use goatskin gloves like these ones (also Wells Lamont) than cowhide for trail work. The closed grain of goatskin and lanolin makes them naturally water resistant (not waterproof by any stretch though) and they're tougher and more flexible for a given hide thickness.  Better than deer/buckskin in my books too.

Plus they are WAY more Himalayan blackberry (and thistle and...) thorn resistant if you encounter that sort of thing while building.

I for one still love my Hammershizzle.  Looking forward to a little snowfall to use the semi-fat Six-Pack to its full entertainment potential.  This bike was my primary for 5 years or so and I disassembled and re-greased the Hammer after around 3 years of all-season use.  Innards/grease still looked pristine.  Oh, and I probably shouldn't jinx myself, but I'm on my original BB.

With the combination of the HS up front and 6 cogs on a single speed hub in the rear my driveline lifespan is at least triple what I get out of XTR 1x11 with its cross-chaining BS* on another bike.  ...and the XTR has never seen conditions as nasty as what the Hammer routinely saw. 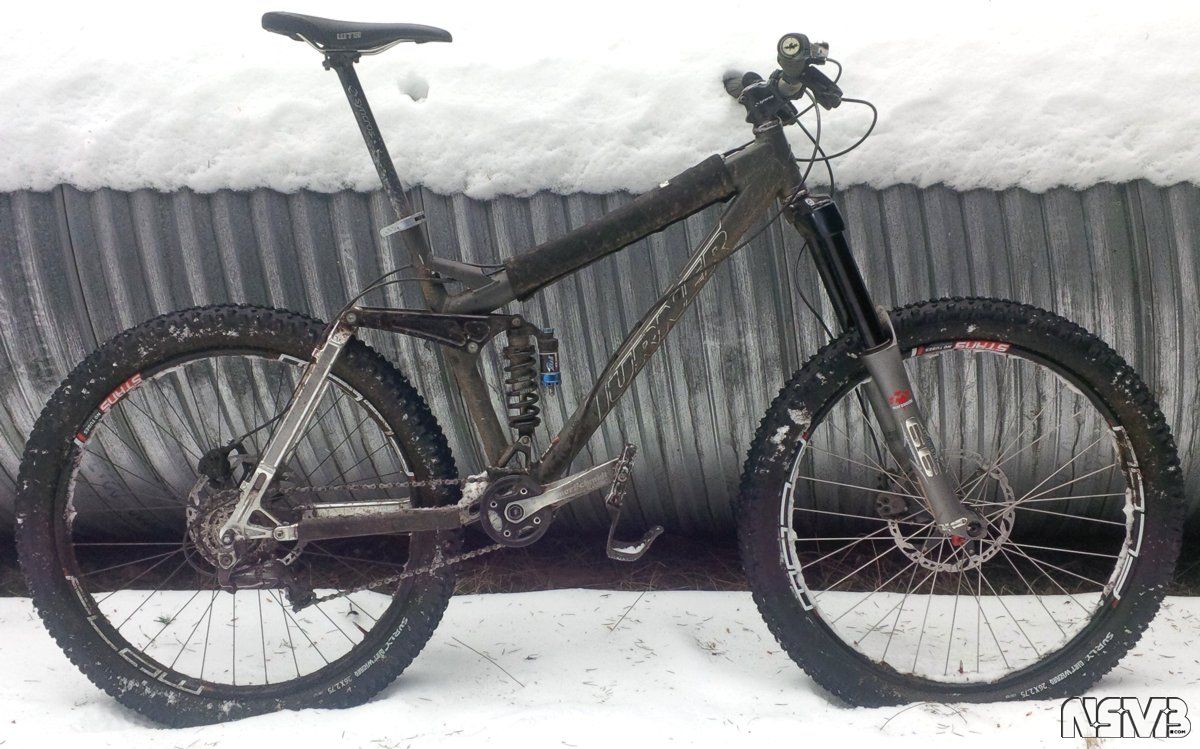 This thread needs a jump-start...with a little high voltage!

It's the minimum efficiency snow bike! ...except it does have a climb switch... 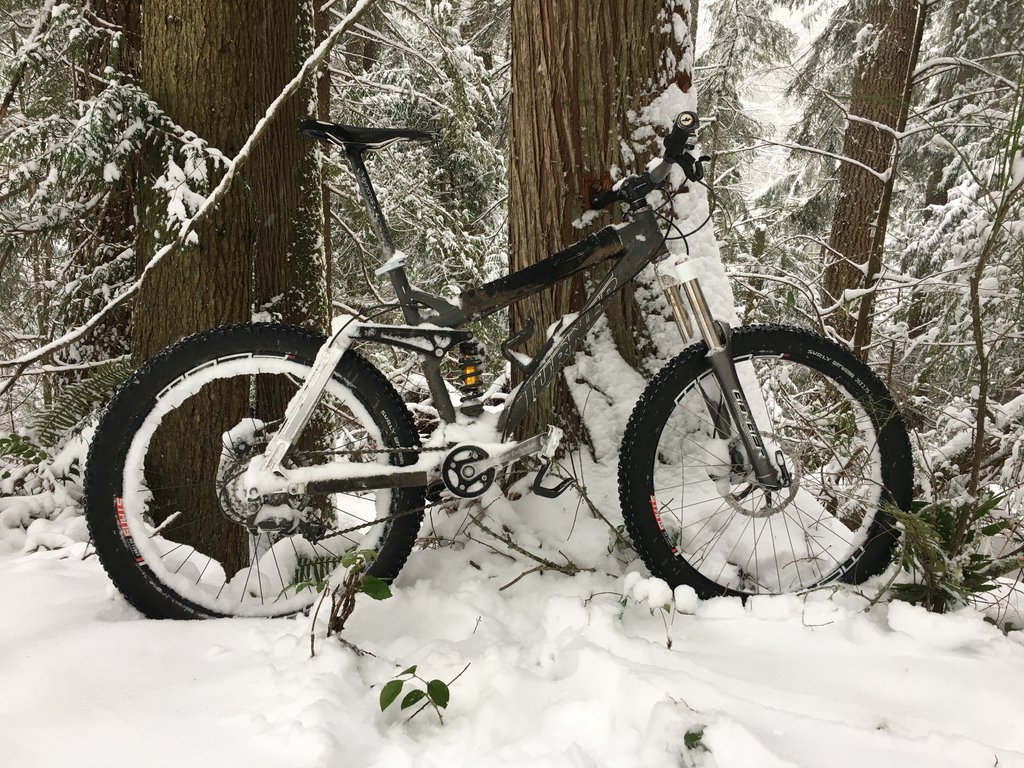 Excited for some snow riding I set of for a dawn patrol to some local trails. Lights charged. All bundled up! I made it a block before I had to help the first stuck car and that was on a main road. When I got onto a side street I had trouble riding and the bikepath was 100% pushing. After a couple KMs of pushing I gave up as it's 9kms+ each way to the closest trails. Usually that's a chill bikepath spin. Not today.

It's amazing how small the window of conditions is for really good snow riding.  I had an unbelievable snow ride today. When I started out, I was blasting through 13cm of snow and I found myself mesmerized by this bow wave form in front of my front tire.  I powered up double-track grades I thought I had no business maintaining traction on.  I even managed to re-start from a spin-out on a hill several times. For the first half of the ride, I probably only hike-a-biked 10% of the time.  I've never been that successful in that deep of snow (I'm only on 2.75 tires, not full fatties).  Every once and a while, I'd hit a little zone where the ground had maybe been warmer, or there was a pocket of slightly warmer air or something, and it would all fall apart.  The front end would start porpoising followed by the rear end breaking traction.  I'd get off and push through that section then sometimes with no change in grade still be able to get back on and get moving again.

While I was riding the snow continued to fall--another 5cm or so.  I think it also warmed up a degee or two.  That little bit change tipped the balance from best snow ride ever to death march.  On my way out, I was struggling to keep moving and upright going down some of those hills I'd just motored up two hours earlier.

Can't post my pic here because I was on my coil-sprung 6" behemoth (least-efficient snow bike ever!)

I'm considering stocking up a pile of the recently discontinued, still-on-a-couple-websites DHRII 26x2.8. Except one thing: I'm light and more cautious than aggressive, and these tires possess the only sidewall I've ever cut open.

In article comments, Andrew Major suggested the Dirt Wizard 26x3.0. It looks good, but it's also 380g heavier than the Minion+. Enough to second guess that idea (though I appreciated the suggestion). It's for the rear wheel of a mini mullet RM Altitude which I would like to keep playful.

Is that really all the big 26" tires?

I do know of the 2.6" Magic Mary but haven't really taken that thought seriously because it only comes in purple compound.

I think the 26x2.75 Dirt Wizards I've got use a crazy hard compound.  Even at low-ish pressures (maybe 12-15psi? I forget) they are incredibly sketchy on wet rock at low speeds.  The 2.75s have been discontinued (and I missed them going on sale for US$35ea, DAMNIT!) but the 3.0s are still available.  I wouldn't be surprised if the 3.0 DWs are significantly larger than the 2.8 DHRIIs.  Surly has a nice geometry chart for their tires, but strangely, it doesn't include the 26x3.0 even though it's right there in the filename.  You can maybe at least check to see how much bigger the 2.75 DWs are than 2.8 DHRIIs.

I grabbed a pair of fast/light WTB Ranger 26x3.0s (which I think are actually closer to 2.8s) when they were discontinued and getting blown out for US$30ea.  It looks like the 26x2.8s are now discontinued, but I'm not seeing great deals on remaining stock anywhere yet.  I haven't actually mounted/ridden them (they're waiting in the wings for when my Dirt Wizards need replacement)  They've got micro knobs compared to the DWs though.

I'm trying to imagine the rolling resistance of 2.6 Magic Marys with Super Gravity casing and purple people eater rubber.  It might save you from ever having to buy brake pads again.

Looks like 26+ was a super-flash-in-the-pan.  I was hoping the fat bikers would buy enough of them as an option to make their bikes "sportier" to keep them alive, but I guess they are more likely to run 27.5+ or 29 wheels/tires rather than swapping a plus tire onto their fat rims...

The 2.4 Kaiser Projekt Protection Apex looks like a very different tyre than the 2.5 Kaiser Apex (26"). Different thread, different casing and probably different rubber. The former is advertised with a fast wearing competition compound, the latter as hard wearing, fast rolling.

The Projekts are definitely less aggressive than the original DH versions, but I don't think they're night-and-day different.  From L-R:  26x2.5 Kaiser, 27.5x2.4 Kaiser Project, 27x2.4 Baron Projekt.  I think the narrowest more square knobs every 4th location on the 26 Kaiser will make it much more aggressive and slower rolling.  I also think that even though the pictures below make the knob height look the same between the two Kaisers, in reality,  the Projekt knobs are shorter.

The Kaiser Projekt's knob spacing is also tighter than the other two which should give lower rolling resistance.

So if the "worst-case" 26 Kaiser has less rolling resistance than the Baron Project, the Kaiser Projekt definitely should.

One question mark though is the compound.  I'd always though that black chili was black chili, but it looks like you're right and they do fiddle the compound a little from one tire to the next.  Now I'm curious if there's someone out there with durometer measurements for the various tires... 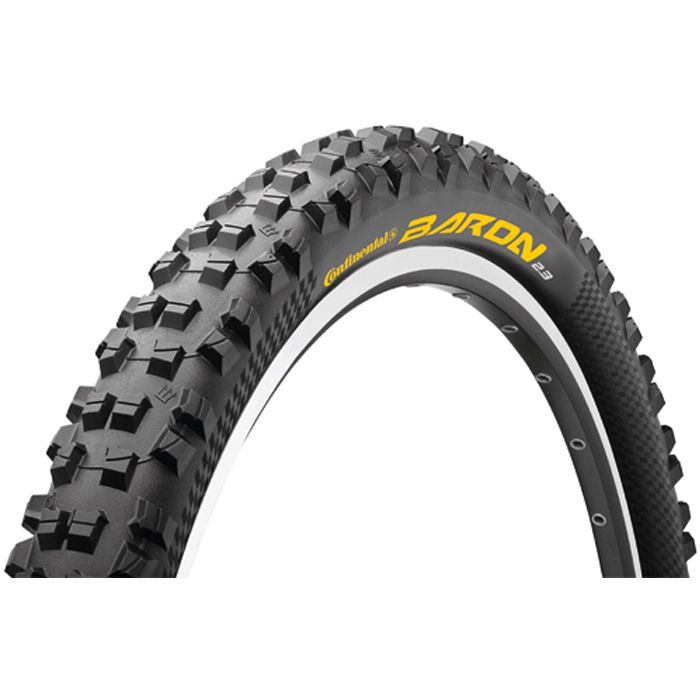 Fun facts, I don't think Hawaiian Pizza is really a thing outside of Canada. Think it's an Ontario invention.

Do you think Kaiser f/r rolls better than baron/Kaiser?

I have baron/Kaiser and they are so awesome on greasy roots and such and the casings have a great level of support, but I worry they will be overkill for summer so thinking about a slightly quicker version for summer. Maybe a trail king out back or something.

Unfortunately even with all the combinations and permutations of bikes and Conti's I've ridden, I've never ridden the same size of Barons and/or Kaisers on the same bike.  The Barons have only ever been on my more "efficient" bikes.  Even though I don't have a direct comparison, I think the 2.5 Kaisers roll easier than the 2.4 Baron Projekts.  To further devalue my opinion though, I'm not the most sensitive to rolling resistance.  If I could get a 2.35 Smoke, I'd probably run them front and rear!

One thing I do though is try to install new tires in the fall then run them through the summer so the knobs are a little more worn down and easier rolling for the longer summer rides.  Although I don't usually use a tire until it's a slick--maybe 50% worn at most?

Sounds like quit a stable, how do keep up with all that rubber?

The history listed does go back over a dozen years, so it's not like I'm swapping tires all the time.

But...since it's all 26, I do have a huge hoard of rubber bought as each tire I like went to ultra-clearance in case the opportunity didn't present itself again.  I think I'm down to my last spare Butcher, so once that's worn out, the Slayer will probably go to Kaisers full time (got at least 4 of them that have never been mounted!)

On my Blizzard, I went from 2.35 Kenda Excavators to first-generation 2.4 Barons FR/RR to 2.35 Magic Mary/Nobby Nic

On my Slayer, I'm currently running 2.5 Butcher SXs for pedally days to save a little weight and Kaisers FR/RR for occasional park/shuttle days

On my ETSX, I went from Trail Kings to Excavators to Baron Projekts

Kaiser FR/RR is my favourite tire out of those listed above for every condition I've ridden with them:  dusty summer to damp winter.  The only reason I don't run them on everything all the time is that the 2.5 steel bead is a little heavier than I'd like for long rides and I can't fit a 2.5 on my "smaller" bikes.

A 2.35 MM only lasted one ride on the Blizzard before it started to buzz the chainstays continuously and I had to step down to the NN.  I don't like the NNs, but the 2.4 Baron Projekts are a little smaller a casing than I want on the HT.  I'm still thinking of going back to the Baron Projekt on the rear though.

If the handles aren't varnished (or the varnish has been worn or even sanded off), a week or so before you take them out in the woods, rub them down with boiled linseed oil, let them dry overnight, then rub them down again.

Be careful with linseed-soaked rags though, they can auto-ignite if left in a confined space.

Looks like you're hockey-taping your butts--tape probably isn't linseed compatible.

I've got such a sweet stash spot for my rock bar and wood-handled hoe right now.  This little dry pocket under this weird hemlock trunk that appears to have been blown over at some point but kept growing.  Hollow cedar logs have also provided great shelter for tools for me in the past.