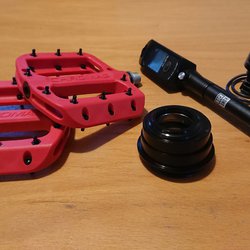 Good point. While I did live in Vancouver for a while, I never got to visit Kamloops and didn't know it was that dry. In such terrain Vittorias, with their good tread design but hard rubber, make a lot of sense.

Those 3/4 sleeves don't look like they would play nice with elbow pads (another great source of weird tan lines). So they are kind of the worst of all worlds?

What a beautiful bike, even if it wouldn’t suit my riding style (or skill level) at all.

I’m a bit surprised by the tyre choice, though. On a bike this capable, built for speed, and made in (and for) the PNW, I would have expected heavier casings and much stickier rubber. Maybe the tyre spec was influenced by the supply chain issues?

There’s always a compromise involved when choosing leverage ratios. While heavy riders might struggle with the required pressures on the Arrival, low leverage bikes can be problematic for light riders, especially with air shocks.

Couldn’t you get a very similar chain line simply by using a non-boost chainring/crank with a boost rear hub?

Does Rocky even sponsor a XC pro team anymore?

I'm not sure if there is even a need for the Element to be XC race capable. There are enough other bikes out there with more aggressive XC geo.

I can only speculate, but i guess the two brands have very different selling points. Deuter packs are bought primarily for reliability and long-term use. Their roots are in hiking and mountaineering. The designs used to be quite boring and conservative (current ones are nice, though). Evoc is much younger and focused on style obsessed action sports (Biking, Snowboarding). Their customers are probably more likely to replace packs long before they are worn out, for optical reasons.

None of them make their packs in Europe. For that, one needs to shop at Ortlieb, but they don't really make packs for off-road riding.

The critical thing about repairing backpacks seems to be model-specific zips and buckles. Skillfull shops like HPML can probably work around that, but most local ones can't. Thats why i like manufacturers with long term repair services.

Backpacks can be amazingly durable. I recently sold two Deuter packs that were over a decade old but still in excellent condition. Just to replace them with a different size Deuter pack that I expect to last another decade, at least.

Even better if you have a local shop that can repair them, like hpml. Or if the manufacturer offers a long term repair option. Deuter does, at least in Europe. Annoyingly, Evoc doesn't, despite their packs being even more expensive.

What it certainly does is shortening the distance between BB and grips, all else being equal. Aka. the weighted sum of reach and stack. In my mind, that is the relevant measurement when it comes to frame geometry.

When can always trade effective reach for stack and vice versa with spacers, stems and bar roll. So increasing reach by lowering stack just changes fit, but doesn't gain anything in terms of frame geometry.

That mullet conversion might be the last resort if plus tyre choice gets really bad.

But given that Schwalbe has a habit of supporting uncommon tyre sizes for a looooooong time, it might never be necessary (just look at their 26" lineup).

The Baron equivalent in the new lineup is apparently the Argotal Enduro Soft (what a name downgrade! ).

If you get one of the Enduro-style FF helmets, you may end up using it more outside the Bikepark, increasing total safety by quite a bit.

And even the full fat Guide RSC isn't a terribly powerful brake. It's OK for lighter riders when using good pads, but I relegated mine to the XC bike where they fit much better than on the trailbike.

that tread pattern with a modern big casing (maybe a 2.6 even) would be pretty darn nice. 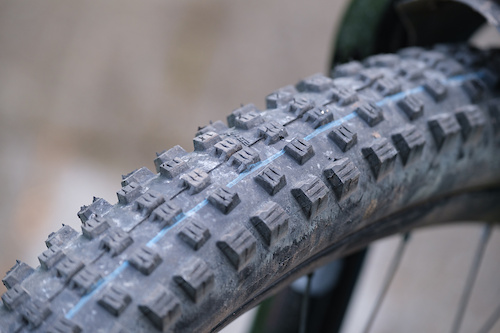 Schwalbe Wicked Will (can be had in 2.6)

Nice! What's the difference between the V3 and the V3.2? Mine is V3.  Also, I need to pick up one of those fenders.

The new V3.2 has a 30.9mm seatpost whereas the original V3 had a 31.6mm. Think they had some reliability issues or something with them. This change was also made to a few of the other V3 lineup.

The V3.2 has more seatpost insertion depth. Seems like the welds on the thinner walled seat tube of the V3.0 sometimes interfered with the seatpost.

The new Contis do look good though. Shame about the tire names though.

That's the other drawback. They had those teutonic sounding names, quite fitting. And now they let a pharmaceutical salesman chose the names.

Digging up this thread again. It seems like Continental now has a full, entirely new lineup of gravity-focused tyres. Threads are remniscent of DHR, Assegai and Dissector, as well as the previous Baron. Casing is supposed to be entirely new, with a 110 dpi layup. If the rubber compound is as good as it was in their previous tyres, they could be winners.

The DH tyres are surprisingly light, might be a good choice for self-pedaling grip-lovers.

Sadly they dropped the "handmade in Germany" feature. Some models are apparently still made there, but the rest ist made in different plants in asia.

It seems they were overshadowed by high pivot bikes as the "new thing in suspension".

Might be going against the grain here, but i'm not a huge fan of anything Maxxis when it comes to straight up rolling resistance. Most info about "fast rolling" Maxxis tyres is purely anecdotal and humans are provably terrible at "feeling" or rather guessing rolling resistance of bike tyres. Even Nino Schurter is racing on special non-production tyres because the stock ones aren't fast enough.

What i learned from rolling speed comparison tests is that

1. Rubber compound is, by far, the most important factor

3. Rolling speed and wet surface grip are perfect antagonists. There are better or worse compromises, but you can't ever have both.

Therefore when looking for fast rolling trail tyres i would consider the following:

Anything made by Vittoria. Very fast, but sacrificing wet grip.

Anything in Schwalbe SpeedGrip rubber. Chose casing and tread to taste. Often quite heavy for their class.

The new Specialized Gripton tyres. Rear tyre for light trail duties would be the Purgatory.