The NSMB 2012 US Election thread

Just in case you missed the Daily Show and can't see in Canada: http://videocafe.crooksandliars.com/heather/jon-stewart-praises-eastwoods-fist-full-aw

If I see one more article with people who believe in "woo" science...

Id love to have had this data before the resolution was passed, he said.

Shops try too hard to carry a little of everything, and as a result never really have anything. Speaking in general of course. It's part of the reason why parts cost so much. That and never ending options we as a consumer demand.

This. Shops should figure out what they're good at and do that as well as they can. 37.1 lbs. Protype pedals are fairly heavy at over 500 grams. Not the lightest wheels but she gets the job done.

Why did you choose the Moon for a DH bike? Less snagging?

Which one were you on?

people think minions are good?:lol: gonna be looking into them hans…

That's why no manufacturers blatantly copy the Minion design.

That being said Hans Dampfs are fairly rad.

got to ride this yesterday 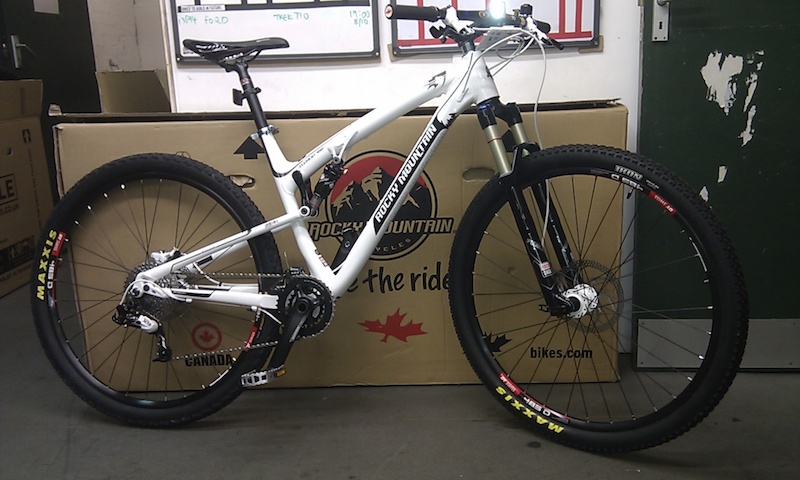 not been a fan of Rocky Mtn for some years, but this changed my mind

relatively cheap in the UK (GBP£2200) considering the spec.

My girl is on one of these and loving it. She took the reflectors off though.

It's weird that the overarching response to a breakup is chauvinism.

My humble thoughts on the matter:

650B and 29'er component and bike manufacturer change-ups are going to be made ONLY within the companies who have large sales distribution so that they can absorb the costs of the re-tool. They look at it like this - "will the marketing of the new fad be profitable enough in the short term to consider product development? It's gotta be short term thinking only because if the product launch fails, they have to be prepared to revert back to the ol' standard 26.

They are selling less of an "evolution" and more of a "fad". Think about it for a moment - when was the last big thing in mtb? Not for a while, really, right? So hey, let's make this "new size" a revolution baby - let's shake it all up - let's make this happen!! Anyone here remember the absolute vehemence that DH'ers swore by with their 24" rears back 10 years ago? Just sayin'…

Here's my take on it. There's the rapidly fluid and dynamic demographic who follow and purchase into the product cycle/fashion of their chosen hobby. The enthusiasts - the peeps who hang here - buy the magazines - know all the latest tech talk and so forth. These are the people who this 650B and 29'er "fad" is being "fed" to. There's another breed out there… The people who've had bikes for years, maybe get them oiled up and the like every so often, who just go out and ride. They're the "baseline" - they don't change much and overall, they're the pain-in-the-ass of the industry and marketing machine. Bottom line is this - whatever population of bikes is currently out there, world wide, with whatever specific wheelsize, it'll be this "majority" that will "maintain" the standard - whether racers, enthusiasts, or not.

I often think/believe these change-ups are solely to move the sales up, stimulate a stagnant buying demographic, get peeps sucked in, SELL SELL SELL, and then fall away 3 or 4 years later claiming "thorough testing proved that there were some discrepancies with the newer sized models and overall, we just feel more confident now knowing that the 26" wheel size really is the best of all worlds blah blah blah….".

Mark my words. Check back in 5 years.

Instead, why don't we look BACKWARDS and remember about how shitty bikes used to be?

Of course the industry wants to make money, and of course some people benefit more than others from a massive number of SKUs, but lets be realistic that the culmination of all the incremental, overmarketed "game changers" over the last 10 years has made bikes fucking awesome.

650 b makes more sense to a short guy like me. I sat on a Shinobi and rode it around a bit and it didnt feel flickable….

That's because they handle like a bus. A fun bus, but still a bus.

When I first went on the EXO I was happy. But once I went back to the DH casing I could really feel the difference.

I'm sure there's a certain amount of old bagged-out tire vs brand new tire that often makes me come to the conclusion that whatever tire I just put on is my new favourite tire in the world.

It's also too bad the 3C compound is harder on the exo than the DH version or I may try harder to get it to work.

do you have the time? a thread on watches and such

I hate it that all the cool watches are men's watches…

Even if they made cool women's watches I probably wouldn't be able to read the time!

Didn't someone post a Reverso? Lots of women wear those and they have a certain deco charm…