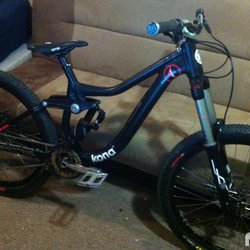 such nice lighting and skies….

Ace gets shotty on first use I've seen of the word 'shotten'. Nice one.

The typical Saturday morning began as not so typical. The loud shrieking noise of my phone blasting terrible noises into my silent sleep at 4:45AM unpleasantly awoke me for a sun rise shred mission. The mapped out mission for the morning began late Friday night with some new and old friends at the riders meeting. I was very surprised to see many other groups in the bike room in the morning with the same prerogative. The gruesome bug infested, yet beautiful hike up silverstar with Mark Matthews, Connor Macdougall, Mike Kirk and Brock Anderson began. Smashing a sweet flat rolled corner on pipe dream as one of the first shots of the morning. By far the earliest Ive ever shotten!

Battling bugs, spotty sun patches on trail and the guy in the back of your head saying [HTML_REMOVED]#8220; Hey! You know we could be sleeping right now, right?![HTML_REMOVED]#8221; we made it work. Smashing corners, scrubbing jumps, Blasting big airs on jumps , yelling at wildlife made for probably my most exciting morning ever. Staying low and sideways on a highspeed step up on pipe dream. I swear the sun was rising out of this landing, a little blind! Marks shadow kind of made it a little easier!

Group breakfast and meeting commenced about 4 hours after leaving to the trails. Riding for that long and that early on an empty stomach definitely made for a hungry crew! Many bagels were consumed. We then headed out for some sweet warm up laps with current team members and got into the swing of things!

Shortly after our warm up laps we shredded down to pro-star and had a super sick session. Forsure the best sickest jump line ive ridden in a bike park! Some guys had some slams and some stomped some really rad stuff! Doing a little Nac attack action on the "Mother" step up on pro-star. This Jump has a super long landing that turns into a tight left hander, even if you screw up your still in for a sick corner. Super fun forsure. An 8 foot drop led into this sweet right hand step up hip. Throwing a little opposite schleyble for the legend Richie himself. You could get super drifty on the run out of this landing. In between the jumps was almost as fun as the jumps themselves!

After having a blast on pro-star we went down to a new trail, [HTML_REMOVED]#8220;walk the line[HTML_REMOVED]#8221;. Now this is a rad jump trail! Ive said it before and by all means mean it when I say it[HTML_REMOVED]#8217;s the best jump trail I have ever ridden in any bike park! Silver star is sick, I very much enjoy trails where you have to clean everything to get through the trail. This got me stoked, jumping through tree branches, roosting corners, scrubbing jumps, and blasting whips made for a sick session! This was the first jump on walk the line, you could pop it super high or pocket it into the trail-side wall after the landing. Using my front wheel to take out some tree branches. I like to fake dirtbike sounds when I ride sometimes… Old habits. Sweet high speed loose corner about halfway down walk the line. The less you brake the more fun you have on this one! Definitely trusting the tires.

We wrapped up our session on walk the line and headed in for a sweet lunch at the saloon. After lunch we quickly got back out for more shooting, and by quickly I mean it. [HTML_REMOVED]#8220;Comet[HTML_REMOVED]#8221;, a simple fire road down a ski run made for some of the most exciting blasting ever! Tomorrow I go for 95.. One of my favourite things in bike parks, nothing like hopping 50 feet off rollers while pinning down a road. Thanks Strava!

The afternoon was consumed with rad times with the crew, filming and shooting photos on some of our favourite spots on the mountain. Not only was I looking to get stellar shots for myself, but awesome shots for our shooters as they are competing themselves. The afternoon flew by, and we got some pretty sweet stuff! This weekend so far has been phenomenal and I cant wait for tomorrow, where the Dag[HTML_REMOVED]#8217;s DH race awaits. So far this weekend has been stellar! I cant thank the guys behind the NSMB crew enough, Such an awesome chill vibe with friends and an insane amount of shredding!

Check back in tomorrow,
Ace Hayden.

you have to run a rear 7 inch rotor and dropouts halfway back for the rotor not to grind on the frame..tight

GNARcroft???? as in the trail from Sun Peaks to Whitecroft? I remember running that on a Rm6 with my buddy on a 01 Norco Torrent. but I never new it had a name.

Watch strength in numbers, trail has changed a little!

32 is pretty light - whats the spec on that? Those look like really fun bikes

Given the gratuitous truck shots and the shot of him drinking a beer it seems like he hasn't learned a whole lot from this experience. Yeah yeah I know the big stupid truck is part of his whole redneck hard-shredding identity or whatever, and that most people here, myself included, typically have a beer at the end of the day…but all this controversy stems from him getting drunk and helping to destroy another person's truck. Given that a truck or beer isn't essential to a MOUNTAIN BIKE edit, this guy showing off his truck and suggesting that he's cooler cause he's drinking shows a real lack of sensitivity to what he got in trouble for in the first place. If I were a professional mountain biker and lost my career because I burnt down some innocent guy's house, the last think I'm going to do in my 'comeback' edit is give a tour of my mansion. Think about how the guy who doesnt have a truck anymore feels when he sees this. This edit doesn't show that Alex Pro is a responsible adult who made a mistake but is trying to overcome it through his riding, it shows that hes still just an ignorant chongo who doesnt understand consequence. Wonder why people think youre a loser bro douchbag because youre a mountain biker? Its not just because of the guy on the hardtail with Monster T`s cutting off kids at the skatepark, its also because of people like Alex Prochazka and shit like this.

alex was 0.00004% of the riot.. it was over 6 months ago, he had something to lose, he lost it and paid for it. He will always shred and and you cant take that away from him.

it wont embed for some reason but heres a link[HTML_REMOVED]#8230; new pictures to come once new wheels are thown on..
http://www.pinkbike.com/photo/7489430/