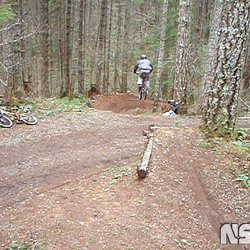 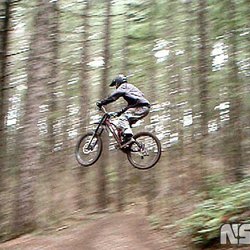 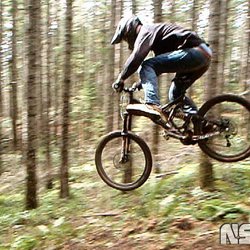 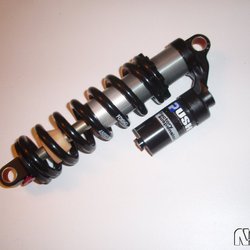 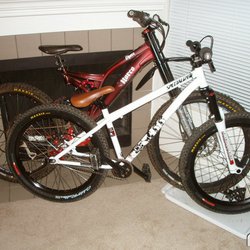 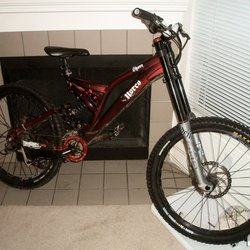 Title: 2007 Shore III with the Zoke Treatment
Posted by: robholio 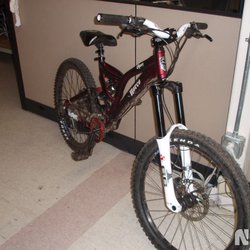 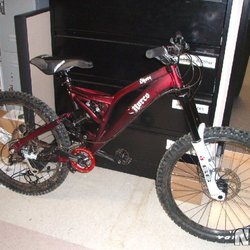 Kat Sweet. She sends it!!

Dan would be so proud…..And a little jealous…

Is the sport taking off in Russia? I know Poland is going off….

Hell yeah! What year frame is that?

I remember when that tech was new….Damn, how did we not break ourselves riding stuff like that?

A KHS with a Horst-Link? I wasn't aware they used that…

That's closer than I'd care to be…

That dog looks scared shitless with nowhere to run.

Nice footage. Although, if you're going to poach trails knowingly, it's probably not a good idea to advertise it, especially when access to those trails is tenuous at best right now. That said, shred on!!

i will disagree whole heartedly. Ive had many Norcos including the 4XXXX. It was way too single purpose feeling for what i would like. But that is what they designed it for. Rides with a starting gate only need apply.

This bike in question will out shine as a more versatile ride.

I meant more in regards to its cockpit layout. Shores always feel too long for how cramped the cockpit layout is to me. I prefer the layout on the 4XXXX. Now, just add 3-4 more inches of travel and a 65 degree head tube angle and I'm a happy camper…

I had a nice chat with the Norco guys at Crankworx this morning about using the Range as a "one bike" built up with a 180mm fork, coil shock and DH tires for more than mellow days in the park. I asked if the bike would handle my hack 230lbs. Their answer? "Absolutely."

I wouldn't mind seeing a beefier version of the Range replacing the Shore outright. I always liked the geo of my 4XXXX and wished the Shore felt more like it. With this layout, they're going in the right direction.

I think the only people not liking his energy are the kids on PB who have no clue who he is and what he's done for this sport. I love his energy and that he's always out there full of energy. I think he's got more energy then the kids.

Yep. Personally, I think beside just plain ignorance of the history of the sport, most of the PB groms just don't want to admit that a 40+ year-old can still outride them and get mad respect from industry folks without doing superman seat grabs while wearing size zero pants from the girls section at The Gap. But again, that's just my opinion.

On the Pinkbike angle, I'm usually the one that ends up deleting those negative comments from the groms, and was inspired to write the following after Brett's video recapping Sea Otter:

Respect Is Earned Not Given

Like I said all of you who supported BikeRescue should think real hard about your lack of ability to critically assess anything.

For espousing critical thinking, much of what you posted over the last 5 pages just came off as critical, if not judgmental. And to clarify, my comments were not directed solely at you, they were directed at all parties concerned, and I never took a side. I spoke of community, yes, as in clearly communicating with each other about a common issue, as opposed to the "accusation/explanation/justification" exchange that read like American partisan political bantering in a tabloid. For someone with such a strong linguistic acumen that writes so eloquently, I didn't expect what I read. Sorry if that lowers your opinion of me.

This board is better off without you with that kind of completely asinine tripe you just wrote.

Love you, too. It's always nice to know that when I express a dissenting opinion or comment as forcefully and consicely as many of you do that it will be frowned at and looked down upon, hence the pedestal reference. Lastly, isn't tripe a fish?

Good lord!! I just realized why I haven't been reading/posting here much recently. After reviewing the last 5 pages, it was like reading a Pinkbike thread pissing contest, only the posters in question are older, "more mature(?)," and better financed. Aside from older, I may have to argue the other traits.

I am friends with people on both sides of this argument, and to see how easily many of you draw conclusions based on tabloids, point fingers and flick shit, and generally disrespect each other to see your words on a page is pretty weak. The way I read it, DUB was happy to get his bike back in the end, and was being pragmatic in that he really could NOT do anything else beyond that point that was not already happening. At least he admitted to a previous failing to all reading this, which was ultimately more difficult than the status quo of talking down from a pedestal like a few others here tend to do more often than not.

Way to bring the mountain bike community together by talking shit to each other like a Pinkbike BMX thread….CLASSIC!!

Hoping to run into some locals and get a good tour. Or just some one to have some beers with.

If you can find the trail heads for Crank It Up, Dirt Merchant, and A-Line, you'll do just fine. All the rumors you hear about how popular those trails are are false. They're even MORE popular than that!!

I am in agreement that there should be 2 threads.

This debate is reasonable and has little to with what kind of a person Sam was.

As for all the conspiracy theories…..I am always one to question the news, but to say that he was "murdered" rather then face the hard facts that he was under a lot of pressure and ended his own life is a bit of a stretch. Flame all day on the "fact" issue. I am trusting enough to believe it to be true- that being said, I do think it warrants further investigation.

I am also getting tired of the DEA entrapment topic. The DEA has the ability to temp people that are already on the dark side. He was involved with drug running. He got caught.

I have been offered from 10k to 50k a trip to run weed over the years. Used to be about $1000 a pound across the border. I was soooooo broke, and I said no. Therefore I was not able to be "trapped".

I love weed, I think it should be legal, I think the war on drugs is foolish. That does not make me a hypocrite.

If weed were legal Sam may have been looking for another way to make a quick buck. It is always so easy for those involved to use the war on drugs as an excuse to make money.

Ohh its just a little growshow, 2 lights, hmmm extra 5k every 3 months. Its ok its just weed, Im not a criminal. Not true. Until they legalize it, you are a criminal engaged in a profitable business.

However, I feel that if you grow a bit of weed, and "dont sell it". I feel that is a stretch as far as the term "criminal" goes. yes there is some contradiction in my words, but is a tricky subject or we wouldnt have 13 pages and 10,000 views.

Good on on those that have kept this polite.

After reading this, I have to say I'm pretty much in agreement with all of it. Very concise, Cory.

I think my earlier issue as this morphed into an issues debate was just respecting a fallen rider since it had just happened and I felt it the respectful thing to do, as opposed to going immediately into the right/wrong of his actions. That time has passed, however.

Entirely my point. Regardless of how I view the decisions he made that ended his life, I respect what he brought to the sport.

From the day I first met same in 99 at the Kootenay Fat Tire Fest, he's held a special place in our lives. Done a lot for riding communities in our area, and was a great friend to all of us. Thanks Cam for the very thoughtful words.

Sam, your life has touched us all, you will be remembered as one who pushed the sport and touched our lives.

Thank you, Mike. That was a proper tribute to a fallen rider, regardless of the reasons behind why he fell.

Shame on the others of you that felt the need to turn parts of this thread into a debate about morals and legality. No class, and I'm more that a little disgusted…