thanks guys, there should be a few more videos coming out this season!

I had a chance to stay with Tyler McCaul after Sea Otter for a few days..here's some footage of us riding 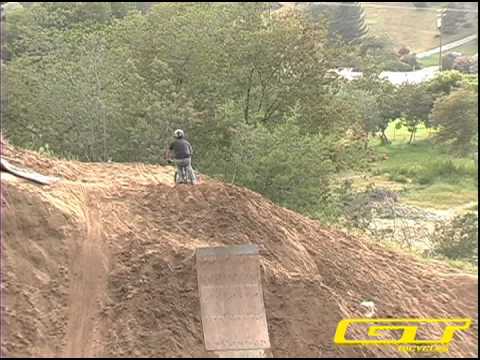 is there a typo on the event date..?it says june..i think you mean July?

Check this kid out, he kills it!

So it's axle path is very similar to a high single pivot.

Minimizing the mnovement of the BB relative to what ?

If you could see the fork compressing evenly with the rear suspension in the flash aninmation you would also be able to see the BB moving in a predominantly rearward arc relative to the bars ! The sprung mass (the rider) is connected to the rear axle via a short link that is at maximum extension -relative to the BB. The the effect of the link on suspension performance is minimal (I think it's main function is to allow for the location change between the BB section's pivot and the rear triangles upper pivot when the suspension is activated) so really it's a URT :agree:

1. Axel Path of a Single Pivot Bike generally would come up vertically and then forward towards the bike as you complete your compression, this design would have nothing pushing the bottom of the swing arm out backwards. Trust me..if it was a single pivot, I'd tell you all about it.

If you look at the Flash Animation if you can see the dark grey line separating the rear wheel at the center (pre-compression) - on a URT design the wheel would begin moving vertically then curve to the right. You can see our axle path fades off to the left getting almost vertical near the top.

2. Minimizing the movement of the BB relative to the rear axle to minimizing chain growth, while having the axle path that we desire, which is to move back and up not forward and up.

3. The fork compression has relatively little effect on the bike - the flash demo would be a correct representation of the bike IF the front triangle pivoted at the head tube. In reality the front ends of bikes would pivot at the front wheel, thus the "rake" wouldnt be as severe. Also with the given head angle of the bike not only this bike but most bikes, compressing 7"-8" is really irrelevant.

I also didn't say that the BB doesn't move at all, infact it moves, but not to the extent that you have stated, it moves about 1" (+/-) depending on the frame..trust me, i have a few freedrive's sitting beside me here that I'm looking at. And for the record, you're not going to even notice your feet moving, its not like your feet are getting ripped out from under you! and plus your feet adjust all the time when you ride with out you even noticing.

If you're implying that the Freedom Link is in there for absolutely no cause …sorry to tell ya, but it serves a few purposes. If you study our bikes carefully, each bike has a different angle on the freedom link and the steeper the angle and the length of the freedom link - determines how "snappy" it is off the line and quicker the acceleration is. Thats obviously not the only reason. It obviously allows our axle to follow the axle path that we've designed it for and allows our bikes to have nearly no chain growth with a rearward axle path.

In conclusion…if Mongoose wanted to make a URT/Single Pivot…they would! and it's much easier to and if this bike was a Single Pivot bike I would have no problem telling you so.

But, I really don't know what else to tell you, I've laid out all the facts here and you keep telling me it's a URT/Single Pivot. It really isnt.

I have no problems with you having your own opinions about the design, all I'm doing is just laying out the facts so people can have better insight on the design as well as the purpose for the design and not quickly jump to conclusions.

Chain stay is a bit long, but that is do to the design.
Good to see more beefy short travel bikes. I think it is the way the sport is going. The days of the big gross dorp to falt is over. Flowy is the way to go.

I love my Dissident.

I haven't seen the bike in the flesh but looking at the photo's the position of the pivot on the near vertical part that activates the shock and houses the BB is approx halfway between the shock mount and the BB axle center. That means that the location of you pedals/feet is able to move at least 2" +/- on a horizontal plane relative to your bars/hands.

How does the suspension unload?

We're not talking about a rear wheel trajectory that sends the wheel straight back..it still travels in an upwards motion, its just that it is a "sweep" back. And it most certainly compresses in more of an upwards fashion rather than backwards.

If you can imagine a bike that's compression/leverage ratio increases significantly through it's travel, a design like that would be more likely to "stack up" as you progress through the travel as the spring/air shock would be placed under greater compression forces as you cycle through the travel.

FreeDrive maintains a near consistent leverage ratio through its travel, thus giving this bike, if anything, an advantage in keeping the wheel on the ground.

Click play on this Flash animation of the FreeDrive. It's based on an ECD.

And to your point on the BB moving forwards and backwards under compression/decompression, you bring up a good point, if the bike was in a bike stand, yes that would be the case.
However you forgot to take into account that when your frame compresses under load while riding, its not just your rear triangle moving up, the front triangle also "squats" down and it's a combination of those two things, therefore relatively minimizing the movement of the BB.

The idea is to isolate the BB from suspension compression, and as you can see from the Flash, the rear triangle and front triangle work around the BB piece. That animation is not taking into account the compression of the fork, so it looks like the frame gets really raked out, which exaggerates the BB movement. But if you use your imagination to picture the front triangle dropping down with the rear suspension in a similar fashion, I'm sure you'll be able to see what I'm trying to explain.

I'm sorry, I'm not sure what qualities you're comparing from the pipeline to the Nugget. But as far as the suspension design goes…it's nothing like the pipeline..as it was a Single Pivot Bike that did not have an isolated BB.
We have 2 Main pivots, which makes the FreeDrive system work.

For now I'll give you guys a verbal explanation.
Basically, the rear axle, sweeps up in a rearward and upward motion. This allows the wheel to clear free from anything activating the suspension design in a natural way. This is key to the FreeDrive design, and this will also help you maintain your forward momentum.

Compared to a 4-bar, FSR, Horst or other linkages that send your wheel in a nearly vertical/vertical wheel path, those designs do not react as well to square edge bumps and have a tendency to hinder your forward momentum.

This rearward wheel path is beneficial as your front wheel holds a similar upward/rearward wheel path and as your suspension compresses, FreeDrive allows you to keep a more consistant wheel base, compared to the other designs, giving you a more stable platform.

The design also minimalizes Chain Growth, as the isolated BB swings in a rearward path; this contributes to a consistent feeling suspension system, no matter what gear you're in. As for the leverage ratio, we're able to maintain a consistent leverage ratio throughout the beginning to ending stroke of the shock. This makes it an ideal platform for using air shocks, giving it a predictable, bottom-less feel. As the air ramps up, the leverage ratio remains the same.

You will see the Black linkage connecting the Swing arm to the back of the BB, this is called the "freedom link". The length and angle of the freedomlink determines how "snappy" or quickly the bike accelerates. Short and angled down = quick acceleration. Flat and longer freedom link = more supple.

Under pedalling pressure, there is a force called the "anti-squat" and it is the force on a chain that restrains the shock from compresssing under initial pedalling pressure. Obviously this does not "lock out" your rear suspension, but when you get started on your bike and you take those first few cranks or when you're sprinting, which places the most stress on your chain. This is when the anti-squat force will be most helpful in firming up your suspension enough to transfer as much of your pedalling force straight to your wheels.

this isn't what it looks like! i swear! she bent down so she wasn't in the pic and Ian and i had a great moment I SWEAR!!!!! NOOOOOOOOO

Its exactly what it looks like hahahah.
You look a little surprised in the pic Ryan