Good story in a thread filled with negativity? So making up some BS about our brand is a good thing?

March 7th 2013 we got a 'general inquiry' via our website…I will admit many of these go with no reply, but this one I remember reading the email, taking the time out to check the site, and send a response, the resonse was (as I just pulled from my outlook):

I do not see where the above reply constitutes as telling you to F@CK OFF!??? Not cool to post lies about myself or the brand I represent.

Anyways, we at TLD are bummed to hear about Sombrio, Dave is a good guy who had a good idea and we do hope for the best with him and the brand.

Just wanted to apologize for this. In no way was what I said about TLD or Craig accurate and it should in no way be quoted. I was totally in the wrong and shouldn't have posted that. Once again, sorry.

Cool that Sombrio helped you out! You seem to be wearing TLD in more than half of the video however…

Borrowed from a friend the night before as we thought we were screwed and Lynn Valley bikes was thoughtful enough to help us out with a women's kit as well.

Just wanted to share a good story about Sombrio in a thread (mostly) filled with negativity.

Back when we filmed "I'm Faster than You" a video I'm sure most of you have see I contacted all the major clothing brands as we needed flashy gear to film with. We contacted multiple clothing companies and none were able to help. The day we had to film came and we were screwed with nothing to wear. We decided to reach out to Sombrio and THAT DAY they hooked us up with 2 complete kits, no charge and told us to keep them as long as we needed. Without them stepping up to support two guys who wanted to make a funny video I am not sure what we would have done. Sorry some of you had poor impressions of the company, just wanted to share a little story that might change your minds a little.

School me on DJ bikes

On a DJ bike you are going to want to look for something with a long TT and not necessarily a high seat tube as you wont be sitting much except on top of the roll in. Personally (at 6'1") I have found the Banshee Amp in a size long to be extremely comfortable and has a lot of room in the "cockpit" for tricks/whips/flips etc etc… However, if you ride a Stylus you may like the feel of steel a little more than aluminum in which case I suggest you do a little searching on brands like Deity, DMR, NS Bikes.

Kona has the Shonky (?) which is great bang for the buck.

Well ya learn something new…

What about this one?

Should be able to attach to the rack you have, no?

For most 4 bike racks a 2" hitch is recommended but as long as his bike is small there shouldn't be a huge issue.

Not sure if this is the correct forum, however, I am looking to spruce up a couple of walls in my apartment. Was wondering if anyone could direct me to some local photographers/artists who make/produce bike related pieces specifically related to the shore or BC. Or, if there are any on the boards I'd love to see your work and talk about purchasing options. 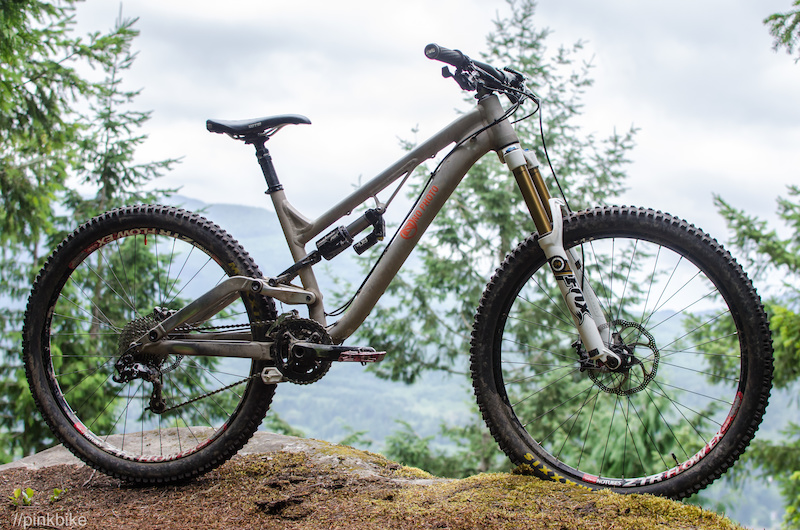 This excites me slightly.

Gonna be a fun summer.

Are those carboner rotors?

For a number of years I have always had the mindset of getting a new bike and/or frame annually to change things up and try something new. However, this past year I was riding a Kona Entourage in a number of locations and of all the bikes I have previously owned not one has been so versatile. So for this year I abandoned my previous way of thinking and decided to make a few small changes to the bike that would make me feel like I was riding something brand new.

One thing that always bugged me about the bike was the colour. I have always been a fan of stealth bikes and decided that this would be the biggest detail I would address in the remodel. I got the frame painted at Dynapro Coatings which is located in the North Richmond region and the whole thing cost approx. $150 which included sandblasting the old paint. I would highly recommend these guys to anyone looking to get their frame powder coated. They were easy to deal with, professional and the overall job looked great.

After the paint was laid.

I changed a few small details in the part spec as well including some RaceFace Atlas Cranks for some weight savings, a Rock Shox turncoat for a cleaner cockpit and the added ability to barspin and a Bontrager G5 tire in the rear which replaced a High Roller as the price was right. Which can be seen below.

The build comes in at exactly 35 pounds on the nose for now and sometime when I am not so lazy I will probably run it tubeless. Until then I am more than happy with how the bike turned out and look forward to riding it for another season.

Photo cred to my iPhone, Instagram and Morgan Taylor.

still cant tell if following matt is exciting or terrifying, great write up!

Since everyone is all riled up. I'd like to add it was a free parking lot, not paid. I pretty much always pay for pay parking.