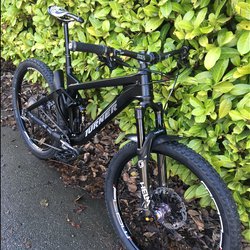 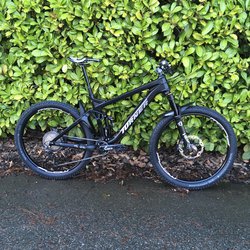 Click where to enter? I think you forgot your hyperlink.

So it seems that Druid is going to be raffled off to a great cause. Any idea what size it was?

I was going to say that 'Bead Buddy' would have been a better name, but it looks like that has already been taken.

I was in the same camp for the longest time. Why would I ever want to ride inside when riding outside is so much better?

Well this winter I decided to give the trainer thing a go, and I have to admit, its pretty good. Got a smart trainer and use Zwift. Currently have my mtb hooked up to it, but am actively searching for an old road bike to put on so I can get out on the mtb where it is supposed to be.  The fact is, I will ride the trainer on a dark, wet, cold night when I just cant stomach the thought of the three hours it would take to go out for a ride. 45 - 60 mins on the trainer gets the heart pumping and the legs a good workout (with different training programs its even better). Im positive my fitness this spring will be markedly better than it has been in the recent past just due to the consistency of being on the trainer. Dont get me wrong, id take an outdoor ride over a trainer ride anytime, but the convenience and advantages posed by a trainer in the dark and cold months are hard to argue.

I'm a long time Turner bikes owner, but they are sadly now no longer in the MTB business. They had transferrable warranty on their frames since they started back in the 90's.

Im assuming that anyone who bought the first version at $10000 - $17000CDN less than two years ago with the 504wh battery is SOL with fitting the new battery?

NOBL is also a Canadian company yes, but their rims are made in China. They aren't much different than buying from Light Bicycle in my mind. There is nothing wrong with that business model, it just differs from what WAO is doing.  WAO gets the credit it deserves for being a Canadian company, with manufacturing and engineering all in house.

Even more of an argument for WAO then. Pricing is the same on the Revives as the Faction. They are 1540g with race spokes and 1425 with CX-rays. Lighter, better rim and hub. Warranty is harder to evaluate. WAO is a lifetime warranty for 'bike related' failures (vehicular stupidity gets you 50% cost replacement), Im not sure what RF offers.

I dont think I can imagine the situation where I would buy these over something like WAO? You can get a set of Factions with I9 Hydra (only choice right now) for $1875CAD. They list their weight as 1720g for 32h or 1665g with CX-ray spokes (which will still be cheaper than the RF). I havent used WAO warranty services, but from my understanding it is likely better than RF as well. Better rim, hub and warranty. Am I missing something?

The 'mute responses to further replies' link doesnt work? I was hoping to be able to opt out of getting all the email notifications now and just come back and read the responses later, but the link is broken?

Head winds are unpredictable and varied. The hills I encounter, are the same ones everyday, so I know what to expect. Headwinds are definitely more evil.

No outrage, just an observation.

Theoretically RadPower bikes are limited to 32kph. Does this hack still work on them?

If so, id say there is an argument they aren't a class 1 bike anymore. That hack is/was built right into the software provided by the company.

I managed to pick up a set of XT 4-pot brakes (with metal pads!) from a local shop on sale for a very fair price. All the online places were more expensive, and came with the crappy resin pads.

I've never heard the term 'garden suite' used as the definition XXX_er has found above. To me a garden suite was always a basement/ground floor suite that had a walk out into the garden. Interesting to see that the real definition is something quite different.  I'm assuming this would be the same as  'coach house' or 'laneway house', which is how I have heard them referred to here in Vancouver.

Ive been thinking about getting a gopro or similar just to help mitigate this type of incident should it occur on my commute. Does anyone else ride their commute with one? The amount of stupid crap I see daily on my commute is probably enough to make a some submissions to 'Vancouvers Worst Drivers' YouTube channel. If the worst does happen, at least you would have a video record of it if you survive.  Then you also might be able to put up a fight so as not to be screwed over by ICBC like this guy.

Dashcams for cars seem to work, helmet cams for the commutes?

I think any of these new bikes will seem really long to you. But you'll get used to it. I find the steeper seat angle feels a bit odd on flat ground but the benefits for climbing are clear. The slack head angle seems like it would be an issue (because it really was on shorter bikes where your weight was oriented rearward) but because the seat angle leans you forward the bike turns really well.

You aren't between sizes. At 185cm you are definitely XL.

Depending on who you ask, he might be exactly right at 185cm and 465mm reach.

Lack of infrastructure pushed me into a Jeep Wrangler 4xe PHEV.

About 40km electric range, haven’t purchased gas in weeks. Could still jump on the highway and drive to Mexico tomorrow without finding charge spots on the way. It would burn some gas, but still has all the hybrid things like regen braking and electric boost from a dead stop so it’s much better than a pure ICE vehicle even with a flat battery.

Being a hybrid it will occasionally run the gas engine up to temp in winter to make sure the oil doesn’t get too much condensation in it, and to make sure the fuel isn’t getting too old. Recharges in just about 2h from 0% on a level 2 charger.

The key with a PHEV is to be able to run your daily drives on nearly or completely electric. If you’re going much more than the electric range on a daily basis I’m not sure the math works out.

Maybe the nicest thing is it has ridiculous torque if you floor it. I’ve tried to avoid that kind of shenanigans but 470ft-lb makes it feel pretty zippy on an on ramp or something.

I’m hooked on electric and hopefully the next one won’t need any gas to patch up holes in the EV charging grid.

Exactly this. Your daily drives need to be all electric (or close to) for this to be worth it. The price difference between the 4xe and the regular Wrangler doesn't seem to be all that much (assuming the same trim level)? You need to be comparing a Sahara 4xe to a Sahara for example.

I assume some sort of EV rebate as well for the 4xe?

Non plug in hybrids make even more sense for most.

The infrastructure for non Tesla EVs is not even close to being feasible in Canada. I would guess that we will be waiting quite sometime for an EV that makes sense to most of us.