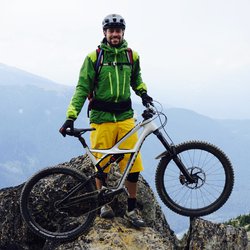 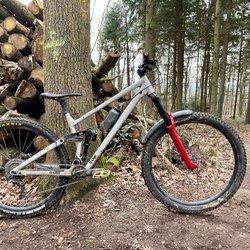 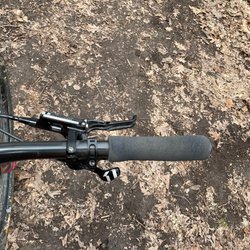 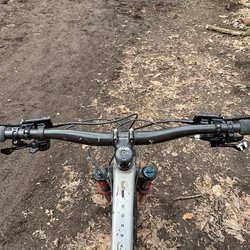 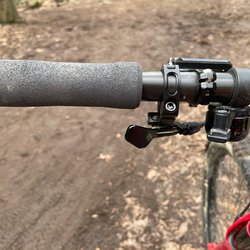 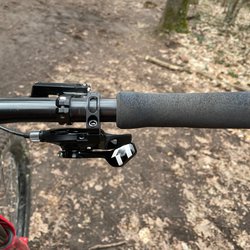 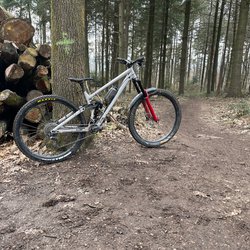 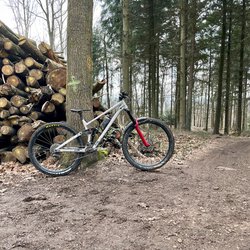 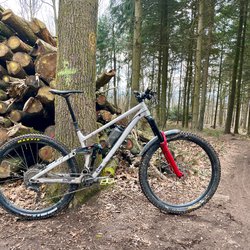 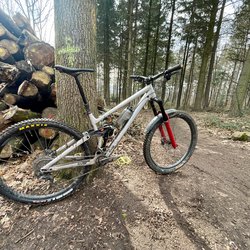 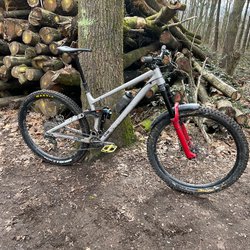 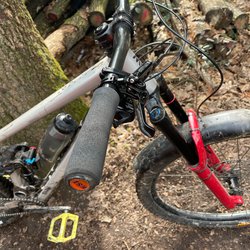 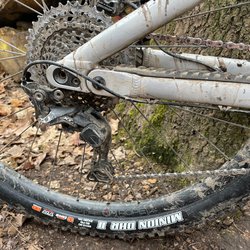 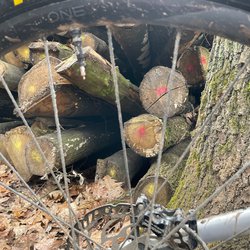 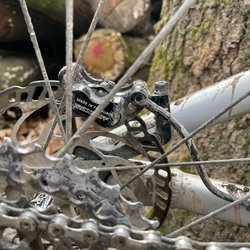 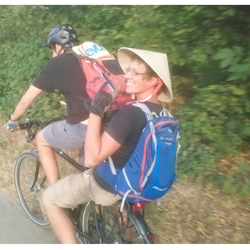 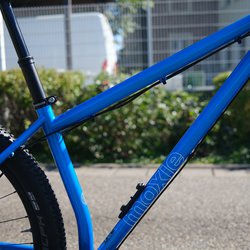 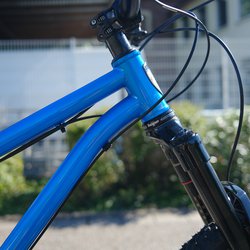 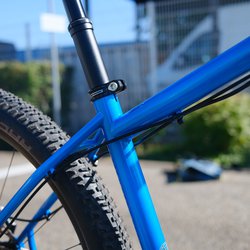 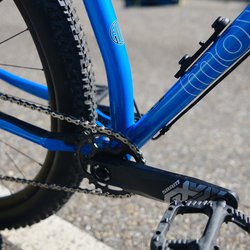 Vecnum seatposts are made in Germany. 213mm travel and light!

Sqlab makes some saddles in Germany, Selle Italia makes some in Italy.

Well, my wife bought an incredibly nice, made in Germany carbon fiber enduro wonder frame a couple of weeks ago and I built it with gucci parts.

It is so nice and light, that I questioned my resolution to never buy a carbon MTB again (after several failures due to manufacturing defects, rock strikes on carbon frames).

She then crashed said shiny frame on some sturdy and rough sand rocks and scratched and mauled the front and rear triangle so bad, that we wonder if it is still safe to ride. It’s not cosmetic :D

Alloy would be much better?

Except - the carbon frame can be repaired. I’m still on the fence :)

I like Santa‘s execution of the bolts and bearings. Their frames seem to be actually conceived to last several seasons of real riding. Pricing is nuts though.

Sadly I am dead on in between frame sizes at 6ft with long arms and legs in the Santa universe. I bought a Hightower V2 used and wanted to love it, but the large did not work for me and the XL was a boat.

Any idea what a large Megatower C frame weighs?

My Raaw Madonna is 3,9kg without shock, size large. A Megatower used to be around 600g less, in CC. So the C frame with storage compartment could approach that probably?

At that point I‘d rather go alloy. The carbon frame may be stronger, but crashes and dents are shrugged of better by beefy(!) alloy tubes. That’s my experience at least both with carbon and alloy frames…

I have a V2 and it is a great bike. Very uncomplicated in a great way. The shock tunnel and sag window and the glovebox don't instill a wish to upgrade. Don't need it.

The price hike however makes my V2 seem like a bargain. Prices are getting insane. (and I never thought bike prices ridiculous before)

There is a bike check on Nico Vouillouz‘s EWS-E-bike on PB. He‘s offering some very interesting insight specifically on harshness Zeb versus Lyrik. Very interesting read!

Great discussion! Could you maybe ask your SRAM contacts if it is possible to bring a 2023 Lyrik Ultimate to 170mm with a different air shaft? Technically possible?

Might be possible, but might not be doable anymore because of the longer bushing overlap, at least not on ultimate forks…

Have to look into it…

Just to clarify, I owned a 38 for half a year and rode that in comparison to my Lyriks, the last ten model years of the 36s and lots of other forks. I do ride terrain that warrants long travel forks on several long travel (160-180mm) 29er bikes and I am fairly sensitive (critical) to how my bike feels with different parts.

And I absolutely do agree that the Zeb and 38 feel much more precise in some situations. For me it was especially felt in bermed corners where you jump in or out. Also when you take the front wheel between your knees and flex the bars. And when you brake on asphalt. There is quite a bit of flex going on.

36s are fairly soft, torsionally especially. They are perfectly rideable and hold off camber stuff fine.

Lyriks are a step up in stiffness compared to the 36.

And the 38 and Zeb feel unphased by most twisting and bending and it is astonishing how smoothly they slide up and down. Lot more sensitivity and consistency. All the upgrades on the 38 and certainly on the new RSs solve some niggles of the older chassis.

Still - I dont race and I feel the added weight far out front from my hips and I felt that to be the tipping point for my long bike to go from still fun and playful, but immensely capable, to DH-sled which sucks the fun out of MY riding to some extent. It was a lot of back to back testing and finally selling the big expensive forks for less. But of course that will be a personal preference.

But she also probably looks more for performance for her race runs than pure comfort or fun-factor.

I have more than two handfuls of riding buddies who snagged up the burly forks when they came out two years ago and after a honey moon they almost all went back to Lyriks or 36s, citing comfort for all day riding. There are very good and very fit riders among them. They also killed several CSUs on Zeb and 38 forks. The Era seems to be more durable in that regard.

Only the very heavy guys and the ones on e-mtbs stick to fat stanchions.

I might give an updated ZEB another chance though, just for fun :)

That stuff looks very promising. Only bummer is, no 170 or 180mm Lyrik anymore. At 165lbs a Zeb or 38 are too stiff and heavy for my liking (tried both and sold them, went back to 36 and Lyrik). They (flimsier forks) offer more comfort over a long riding day, if its rooty and off-camber and slippery and awkward. And when you are tired and not riding 100%.

When you are pinning it, the burly forks feel great and they bind noticeably less. But I get sore thumbs from the twisting motions at the bars (obstacles deflect the tire and stiff forks transfer that to bars more).

But that is just my experience :)

The original owner either pulled a cable end cap into the tube in tube for the dropper cable or stopped it up with something else. I can't get a cable through there and am fiddling like a madman.

I appreciate the external routing on my Madonna THAT much more!

I might have to settle for an externally routed dropper :-(

I have a good dozen rides on a set of Continental Kryptotal Front and Rear (DH supersoft front, Enduro soft rear due to availability)

Both tires run without any wobble. They roll surprisingly well, especially the rear tire. And grip is excellent. I had some rooty wet rides. And moon dust loose rides.

The casing feels fantastic, too. A good mix of support and suppleness. I don’t run any inserts and get away with 1.3 bar in the front and 1.6 bar in the rear tire.

They seem to hold up well, all knobs look like new still.

Side knobs are still intact, braking edges are round instead of sharp. That is noticeable but unproblematic so far. I’d wager I got more kilometers out of it compared to a similar Maxxis tires. For sure I didn’t get that terrible wobble.

I don’t know about Contis pricing in Canada. Over here they are some of the cheapest good tires, if you find a deal.

I bought a DH supersoft Argotal and will give it a try in wet fall.

I‘ve had both problems with my Tannus on several occasions. The wobble issue got worse the older my insert with lots of sticky residue got. I blamed the tires or the rims, but without the insert, no trouble, no wobble.

Aside from that I found that the Tannus inserts to work pretty well at regular pressures. No flats.

Because I was fed up with the hassle I went to DH front and Enduro casing rear on the new Continental tires and ride them without any insert, same pressures. Rides great, no flats under harsh conditions and riding so far. Fingers crossed.

@Neil bar: I tried several different valve types with the Tannus inserts, the ones you mentioned also clogged after time. I suspect it might be that the Tannus traps a certain amount of sealant in its „quarter tire“ chambers. Clogging was in direct causality with brand of sealant for me as well. The ones which seal well also clogged well.

But the RD doesn’t rattle like a toolbox with the shakes?

shoulda, woulda, coulda. My buddy used to praise it for it‘s creak free construction until it creaked. He chased the creak for a long time, because it „couldn't be the fork“. The german distributor took very good care of him though and buddy still loves the fork to bits.

I‘d try one, but find them too expensive for an experiment. A custom valved Storia solved the suspension difficulties my light wife experienced with her new very boutique made in Germany carbon frame though (very progressive linkage on the frame). Saved her from buying another frame ;-)

I have a friend who got a creaky ERA replaced a couple of weeks ago. I‘ve had five 36s and a 38 replaced, but my Lyrik has been silent for almost two seasons. Roulette…

Green capillar loctite works sometimes, it removed the paint on my crown however :)

I have a good dozen rides on a set of Continental Kryptotal Front and Rear (DH supersoft front, Enduro soft rear due to availability)

Both tires run without any wobble. They roll surprisingly well, especially the rear tire. And grip is excellent. I had some rooty wet rides. And moon dust loose rides.

The casing feels fantastic, too. A good mix of support and suppleness. I don’t run any inserts and get away with 1.3 bar in the front and 1.6 bar in the rear tire.

They seem to hold up well, all knobs look like new still.

How about a Raaw Madonna?

My fourth season on one - I couldn’t be happier!

I just put a Luft Fusion air sleeve into my C1 Lyrik Ultimate. It uses a much larger negative volume, a smaller diameter air piston and you have to use 60 percent more air pressure. It is more linear and feels fantastic. I use 110psi instead of 70psi at 74kg with a 180mm fork now, no tokens. Might not work for heavier riders, but is super sensitive and yet supportive. Traction is increased! I did like the C1 with enough pressure, I just felt it was either a tad reluctant in the very first part of its travel OR was divey in the last third.

I‘ll also give a B1 air shaft a try on my wife‘s C1 Lyrik, they are hard to find though…