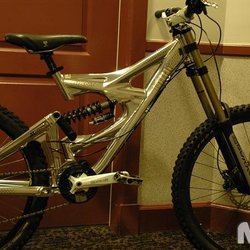 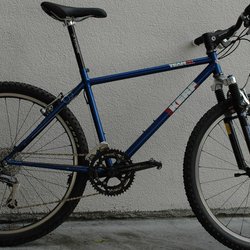 I'm so glad you got the chance to try a real hardtail Cam.

I gave FS a semi honest try, but back to the hardtail I go for what, where, and how I like to ride.

Let me know when you work up the desire to drop TOTW on a hardtail ;)

I couldn't get along with the 11sp SLX shifter. Yes the shifts were lighter than 11sp XT/XTR, but the shift feel felt imprecise, cheap, and plasticy -- worse than a 9sp Deore shifter IMO. Sounds like that has been corrected with 12sp.

SLX does seem like it has been given the squeeze.  Traditionally,  SLX has been the proper entry level offroad group,  whereas Deore served to be a top end recreational group that could transition casual riders into more regular offroad riding.

I guess Shimano could have called the Deore 12sp group here SLX and eliminated the current actual SLX, and keep there Deore branding for 'lesser' 11sp and 10sp groups.

But I do still see a place for current SLX as it stands. XTR is the race group, XT is the high end group for mortals, SLX is the solid mid end,  and Deore remains entry level, all at 12sp.

If Shimano had brought HG+ down to the 11sp and 10sp groups, that would certainly warrant a try from me despite that goofy jump.  Conversely, if Shimano used the first 10 cogs of the 11sp 11-51 cassette (11-13-15-18-21-24-28-33-39-45), I would also consider consider sacrificing 1t on there low end to see if the shifting would be smoother than the Sunrace option. I've found the HG500 11-42 cassette a slightly smoother operator than the Sunrace equivalent, but the Sunrace is perfectly serviceable.

I totally agree the TB is in a notch 'up' from the Spur; the TB geometry and weight are just a tick short of the Hightower, so it's basically a HT that pedals more efficiently IMO but with less big hit ability.

These are the linkage plates that Wade's dreams brought though!!

With Perry's forward ESTA seatpost, I'm sure anything is possible!

I'm on a Giant Trance Advanced 29 as the main bike this year, with the hope of moving to the new Tallboy once some decently priced pre-owned examples hit the used market.

I think I'm possibly in the market for a cheap aluminum hardtail 29 frame too, something like the Growler would suit great if it was available frame only at a value price. Right now looking at the Ragley Big Al which is pretty darn close.

It's solid value indeed, though I'm not a fan of SX anything (understanding that compromises have to be made of course to hit price points). 2021 with the new Deore group should yield some very interesting conversations.

2013 has a bike for you: Giant's Trance X 29er but it would need a HA slackening headset. I kid, mostly. Really enjoy your work as always Andrew.

This year will be my first back on one of those short travel slack trail bikes taking over for my various steel 29ers the last few years. Too bad about Covid timing like with many things, I've been unable to get the speeds up to give the new ride a fair shakedown.

Gonna try to make a SRAM DH spider work for my purposes (thanks Pizza-Diavola!!), but if that doesn't work I might check out the WT. Or maybe I'll just machine my own solution ;)

USAmade make some 104 NW rings with a bashguard milled from the same piece of billet, with the offset you can run as small as 26t on the 104 mounts.

I personally run an absolute black 28t oval ring mounted on the 64mm granny mounts which leaves my 104 free for a bashguard.

Using an android / Samsung phone. For some reason the keyboard dissapears when / hit the delete/ backspace key.

Thoughts as to how to fit it?

Just noticed mine starting to do this, 5/6 times. But not when my keyboard autocompletes the wrong word using Skype typing. Very annoying indeed!

Remember to consider ESTA when you're looking at those huge-seeming reach numbers. The steeper seat angle will reduce effective top tube so sometimes those big reach numbers don't always mean a bigger bike, just a shift of the rider forward on the bike.

In relation to this, I've found ETT to be a very relevant number to inform me of how bikes with very different reach numbers actually fit in real life.

However ETT, similar to ESTA, is only an effective measure if you're of average-ish heights and proportions

I always factor in and assume I'll be charged tax, $10 Can post brokerage fee, and possible duty if applicable, to all online orders.

If it arrives with nothing due, that just found beer money

Lol using your phone? My Garmin is pretty accurate when loaded to Strava.

Yeah. I just keep strava for fun so i really dont care. But this phone's gps is pretty good with day to day use. I had better Strava reads with an old phone a couple of years ago that had known GPS connectivity issues. That old phone gave me a couple of KoM's so who am I to argue

This was my WBP park day last month, laughable at the very best

You don't 'lose' that travel though.  When you're riding that 10mm will come into play as your fork extends into bumps and whatever other side of roots or whatever.

If you consistently have about 20mm of travel left and you're happy with where your sag is set, that probably means you could drop down a volume spacer or half?

Canada Post has been largely reliable for me the past few months. The exception was a dropper post coming to me from Montreal, it was shipped with xpresspost with 3 day guarantee. Ended up taking 5 weeks, with no tracking info available after it was scanned out in Montreal until it arrived at my local post office.

I've been kind of surprised by this, mtb is such a dynamic activity by it's very nature yet people are so concerned with what the part is doing while just sitting there.

Maybe the issue is we've been thinking about setting sag from the backwards point of view. Perhaps we need to view sag as a measure of how much travel is available for use, as opposed to how much of available travel is used in a static position. The 2 are really the same thing, but the difference is if the fork sinks 10-15mm into its travel, and then you add an extra 20% of sag into the equation, you are left with less travel (and a fork that's probably set up too soft). But if you include whatever your fork sinks into under its own weight as part of the overall sag measurement, then life is good.

Thing is, if a VPP is that sensitive to ring diameter, they’d probably tell owners to only use a 32 tooth because smaller or larger will have a different chain line in the vertical sense.

For my case, I think it's more a full suspension phenomenon combined with my hardtail climbing style, not specific to VPP.