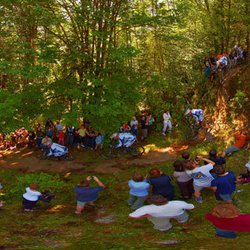 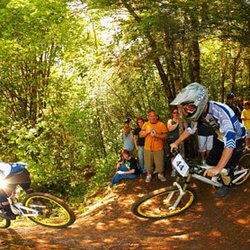 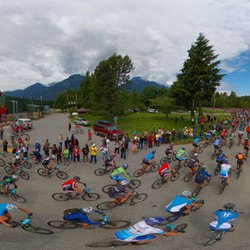 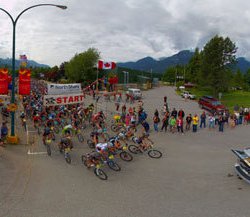 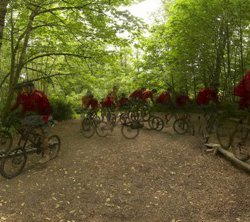 Title: Vali in the trials park at camp
Posted by: john_housser

Same feature in a 360-degree panorama

Thanks for the comments.

Being busy with work at camp, we don't have a whole lot to work with, this is just from a bit of free time we had the other week. I'm also not a huge biker, just been having fun with it at camp here, hopefully I will have a few more to share over the summer though. I'm working on getting involved with the Test of Metal in a few weeks, so that should be fun if it works out.

I'd love to hear comments on the other biking panoramas I've posted online as well (it's not letting me enter the url properly, so try the one in the original message).

Sorry to anyone on IE. And sorry about the issues there, the problem was with some CSS for the banner image not getting applied in IE, which has now been cleaned up and should be showing.

We announced the meeting in an e-mail to everyone on the list on Oct 25th. The main subject of that e-mail was the progress we're making with the Aviva contest, and the AGM was the second point.

We're working on a few final details for another newsletter e-mail that will get sent out and shared on Monday or Tuesday, which will include the tentative agenda for the meeting and a reminder.

Sorry, that was a mistake. Have been busy working on a whole trail status/update/news system that'll be fully online very shortly, and was still fine tuning how the scripts were going to work.

Yeah it was a slow trip out…

Thanks again Judy and James for being so attentive, certainly made me a lot more comfortable knowing there were people around that knew what they were doing!

Getting better constantly though, was able to turn the drugs down a notch yesterday, and hopefully will be able to swap them out for a :beer: tomorrow after Wade's Excellent Adventure ;-)

Sorry if I'm being rude or obnoxious by starting this as a new thread, but I'm still a forum noob I guess.

So I had an interesting run during the Ned's race last weekend. Was having a great time, and riding fairly smooth/fast (relative to me normally), until I got to the gap over the roots (after the wood rolldown/drop, before the big A-frame). I went sideways in the air, and landed on my side.

I want to thank everyone who was there who were very quick to come to my aid. Immediately Judy (the first aid attendant) and James (a photographer with first aid training) were by my side doing an assessment. Within a minute there was a trauma EMT helping them and overseeing the situation.

So I want to thank those that were helping me directly, everyone else that was there making sure I was ok, keeping me together, and offering their help. There were also volunteers there to help get my bike down, and people all along the way that helped me get down (one small step at a time) and kept me aware of racers coming and safe times to walk. A well organized event that helped get me out of there, kept me as safe as possible, and helped keep everyone else safe.

In the end it turns out I tore my obliques, and broke a few ribs. Could have been much worse, but has been somewhat… uncomfortable… for the past few days. The fine folks at LGH took good care of me though, and made sure I'm comfortable with a good cocktail of pills. Thanks also to Canada for helping me out there.

At this point, I'm just doing a bit of a search for any of those photos from the incident, or before that when I was actually on top of my bike.

If you were shooting at that spot, or know of anyone who was up photographing on the course from that point or higher, if you could either get in contact with me, or have them, that would be much appreciated. I know there were a lot of lenses at that jump, but didn't manage to get anyone's names.

I can be reached either through the forums, or directly at john@housser.ca

Here's a photo of me (on my bike), from earlier in my run, for reference… Haha, didn't actually end up eating. That photo was shot around 6am in the morning on new year's day, after a long night of Junkanoo.

I've seen a few demos using papervision to project panoramas, but that's actually a bit overkill for these.

Hey Zedbra, it's not the hardest thing in the world, but does take some practice to get used to some of the quirks and tricks that make it far easier (or harder if you forget)

The easiest way to start would be to set up your camera on a tripod so every photo is exactly the same except for the rider, then you can use PS or the image editor of your choice to mask the rider in each image.

The next step is to shoot a sequence while you're moving the camera. Here the most important thing is that the nodal point of the lens stays in as much the same place as possible, so you can line the photos up with as little effort as possible.

I keep thinking about trying to get someone to help me make a short video about how I do it, but that keeps getting shoved down the list. One of these days…

Sorry about the slightly delayed post, but here are a few of my photos from Crankworx. Click on any of the links to view them on my web site in a 360-degree virtual reality player where you can click and drag to look all around.

There are also many more from Crankworx (and all sorts of other things) on my site.

Geoff Gulevich on the Kokanee Wallride