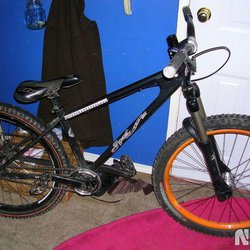 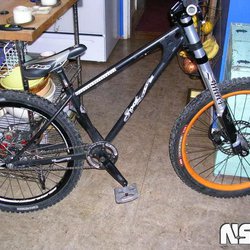 hope his bike doesnt crash in a tunnel, the butler did it.

what park is that?

an article i found just in time for the day
http://www.messmedia.org/messville/10-9DAY.HTM

Let's congratulate all bike couriers on the benefits they bring to our cities:

a solution to the problems of pollution, congestion and gridlock faced by large urban centres
reduce carbon dioxide emissions in the downtown core
take up less space on the road and do less damage to the roads than cars resulting in better conditions and streets for all road users
increase the safety of pedestrians compared to cars. (studies show that pedestrians are "250 times as likely to be injured by a car, bus or taxi" than a bike.)
aid charities, (such as St. Stephen's House through the annual "Courier Classic", BAAR, toys for kids and Prisoners' Literacy Project)
draw tourists and international attention to cities through events and races
provide a value added service that continuously improving firms seek out as a means to reduce costs and improve efficiency (crucial to the movement of important information)
are ambassadors of goodwill for the city (hold doors, give directions, catch thieves, report accidents, retrieve stolen property and hunt down owners of lost items.)
provide a link between many of urban homeless people and the rest of the downtown core
year round cyclists who promote the bicycle as a viable form of transportation and economic development

i'm going to new york on tuesday and staying out in westbury does anybody know anybody that rides in this area and can help out with a connection or any idea of what there is to ride there, and i'm probably going to take my 20 inch bmx due to space limitations

dude you should see the wings…

FOR SALE:TEETH ALL SHAPES AND SIZES PLEASE CONTACT;1-900- put it under your pillow.

ya who said i'd left the planet

back to a five day week in 2 weeks

a shame they're not very good

check out… you know i'm not going to even bother

you should try and snag a night of urban in there, great way to see the city and really learn how to ride