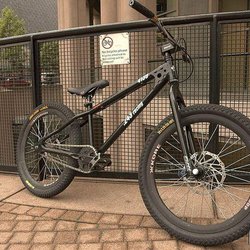 I've been running mine without a single tear for over a year now, just riding street!

Could definitly see myself stylin it out on that.

Hey I just moved to Victoria, only brought my road bike and DH bike, but I'm looking for people to ride with out here, and to find places to go ride somewhat nearby as I don't drive.

Also, NBR, but people into more intermediate hiking, freediving, bush camping, fishing etc. I'm off work untill fall or winter so I'll be doing a LOT of multi-day trips aswell and looking for people to accompany!

I only have two watches these days. Both have seen a fair a bit of abuse through work, biking, time diving and in the mountains. I feel naked without one of these when I leave the house.

Not true. I used a cell phone with WiFi or a SIM card in it, and the GPS worked fine. They only use WiFi and cellular triangulation as augmentation, or in the case where there there is insufficient GPS satellite signal, as a primary location service.

You're right more phones these days do have gps chips that do not rely on triangulation, my mistake. I still would not rely on one as GPS receivers in cellphones are very weak and generally unreliable in the backcountry. Tree cover will essentially render it useless, cloud cover can make it VERY difficult to obtain a signal aswell due to how weak the chips are.

My concern is more, do not rely on it to 'find your way back out of the bush' as that's just asking for trouble. Though if you're building a mountain bike trail, I can't imagine it being in far in the 'backcountry'.

Wow, cell phones DO NOT have true GPS functionality, and will not function properly in the backcountry. Buy a real standalone GPS unit they are cheap.

A cell phone uses celular network resources to locate GPS satellites, never EVER rely on it. Make sure you can navigate home without even a true GPS unit none the less obviously as they don't always function under heavy tree cover.

:lol: I guarantee you it is has nothing to do with Donnelly Group.

Yeah nothing at all aside from being owned and operated by the Donnelly Group… Maybe you're totally confused and thinking of DIVA at the met.

I go there often, 2 dollar pints on tuesdays, 6$ for a little burger some chips and a pint every day of the week… Good deals!

The West Hotel has 2.75 pints. I think the pitchers are 9, but I don't really remember.

Small blue candies sold in a little flat cylinder. They were a combination of sweet, sour, and blue food colouring.
I think they may have been called Screaming Saucers. They are also notable for giving you this:

Also blue or bluey green crap if you ate enough of them. The tongue in this picture is pretty mild, I remember blue teeth, blue tongue, and blue inside of mouth. My insides to this day are probably still dyed. I remember them from around '95ish.

Oh god. I remember those things, I was shitting dark blue for about a week after my first encounter with those when I was 7.

Pick it up downtown. If you want a picture of the couch I can do that. Perfect for some poor mountain biker who needs a clean couch they didn't just find in an alley.

Vancity offers free accounts till you're 25 with [HTML_REMOVED]$5000 balance

All you have to do is ask the judge for his commission. Guess what? HE DOESN'T HAVE ONE. For the lulz. Don't forget to tell him that you do not recognize the jurisdiction of his court as he has no legitimate commission. They get angry, but you'll get out of your ticket pretty fast as he declares a mistrial.