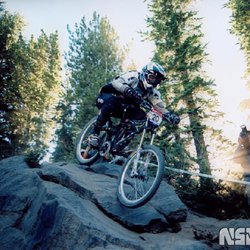 If it's anything like Zack's older vids, then it shouldn't be too bad. Though it would be nice to not hear one classic metal band in the line up… Diggin the HD by the way.

Note that I've watched your clip without sound, such that I'm judging the visual only.

Your transitions at the beginning of the short are way too long. Fade in and out much quicker, if you are going to keep them. If I were editing I'd just cut from slate to slate. Most viewers don't really care who produces the film, or who the riders are, just flash them and get to the good stuff.

What's with the "you get the picture" slate, if you've done your job as a film maker we should, (in this case we do, its filmed all over the states) and there is no need to state the obvious.

The long transitions had to do w/ when the music picked up, so try it again w/ music. I wish I could have done that, but it would have been harder w/ the music for sure. I'll work on it. And, thanks to everyone who has critisized the "you get the idea." I think I'm going to redo the intro and post up another version a bit better quality as well. See what you guys think. Thanks SO much for the comments. MUCH appreciated! Peace.

Kinda', it addled his brains a bit. I think it was the cause of the "you get the idea" thing.:grinno:

That vid was really well done, I agree, the guy on the Blur 4x ripped it.

Yea that guy is Jamie Goldman. He rips. We just happened to visit the Polo Grounds at the same time as he was. And I appreciate the comments guys, especially the critisizm. I agree Lobotiduator, I shouldn't have used the "you get the idea." The song is "Touched" by Vast. This is definitely a learning experience for the future. Keep it coming guys.

Hey guys and gals, I've been collecting a few clips fromm the past couple years and am planning on posting up a video section on all the forums about every month or so. Until I get a website together, this is how it'll be. Here's a little (well it's actually pretty long) snippet of what's to come…

Tell me what you think. Peace.

I say the landing is way too steep for that size gap. I wouldn't risk it. Scary stuff for sure. Good luck if they go for it. I hope they survive.