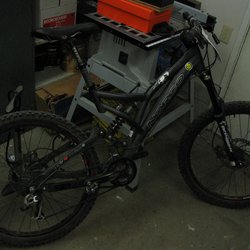 Most professionals and managers at the mines here in Nevada work 4-10's, M-Th or T-F.

My miners work 7/7, 12 hour shifts. Some of the other mines work 5/4 - 4/5, or a super 7 which I have never worked myself and don't really understand. Rumor has it many are moving to the 7/7 we've been doing for the last few years. The guys seem to like it. Many of them live in Idaho or Montana and travel down here for work.

I like the prices on those devinci's, especially that GX. I didn't realize they are the only ones still made in Canada.

I'll be in Van this weekend. I'll try find one to test ride before I have to leave town.

Just don't pull the d-bag move of taking up a shop's time  and then buying one online to get the cheaper price.

Looks like evo has a few of the django models in stock in Seattle. I'm flying in / out of there anyways, and have some spare time friday morning as long as flights aren't delayed. I'll check it out with them.

I'll also be looking for a new helmet, gloves, and probably some knee pads so I won't be walking out empty handed.

I like the prices on those devinci's, especially that GX. I didn't realize they are the only ones still made in Canada.

I'll be in Van this weekend. I'll try find one to test ride before I have to leave town.

Interestingly enough, there is now a hawk hill 1, 2, and 3. I'll have to compare specs later when I'm on a computer and not my phone.

I'd rather buy new. Personal preference, but since I probably won't buy another bike for a number of years I might as well get the most out of it.

Looking to buy a bike in the next couple of weeks. Planning to spend around $2000.

It's been the better part of a decade since I last rode seriously (last bike I owned was a Norco VPS 6, back when <40 lbs was considered "all mountain"), and at that time I lived in PoCo so it was a little bit of a different scene than we have here in Winnemucca to say the least. Probably 80% or more of my riding will be dirt roads and light trails after work. I'd like to get something that would at least be somewhat capable for the odd day back home a few times a year. A co-worker (who I will be riding with most of the time) has a Trek Fuel EX (either 5 or 7, can't remember). Something along those lines would be a pretty good fit IMO, but I'm pretty well out of the loop on what's good, bad, or otherwise.

Technology has changed a lot in the last decade. New wheel sizes, no front derailleur, bikes weigh a fraction of what they used to. What do I need to know before I go spend a couple grand?

I don't think you guys actually understand how the speculation tax works:

"The speculation tax will target foreign and domestic speculators in BC. These are homeowners who have removed their units from BC ’s long -term housing stock – meaning they are not owner -occupied or a qualifying long -term rental property. Satellite families - households with high worldwide income that pay little income tax in BC - will also be captured by the tax.

The majority of BC homeowners will be exempt from this tax. Exemptions will be available for:
- Principal residences (excluding satellite families) 
- Qualifying long-term rental properties 
- Certain special cases"

I don't think anyone understands how this tax will work, including the NDP, because details are not provided. The lack of information feeds fears.

Making it up as you go along is not responsible governing.

No one has ever accused the NDP of being responsible, especially when it comes to managing money.

The "Albertan vacation home" is where this tax will fail. The Charter allows all Canadians to take up residence wherever we damn well please. This is a tax on people choosing to do so.

I've been looking for a vacation property. This just takes BC off the list of jurisdictions.

as with many smaller centers in BC, bring your own women.

Got that taken care of. We would have to bump the wedding date up so she could live north of the border though.

Anyone here live / used to live in Campbell River? I may have an opportunity to move up there in the near future, wondering what its like? Any insight would be appreciated.