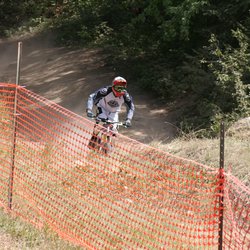 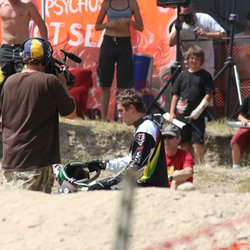 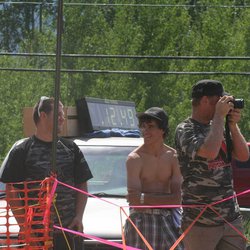 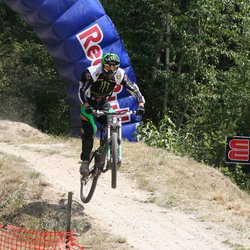 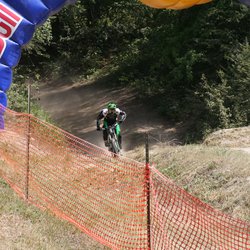 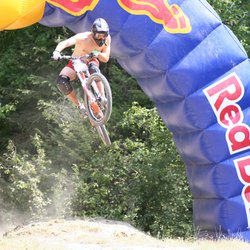 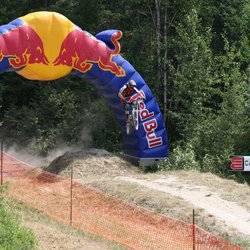 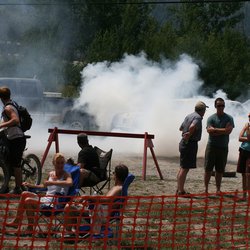 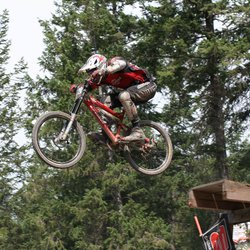 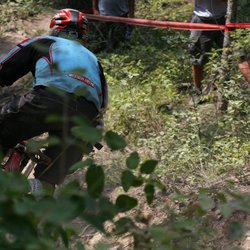 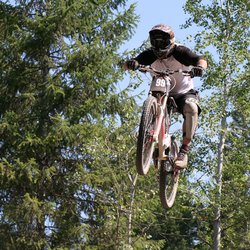 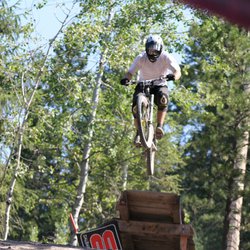 Just in case there's any doubt that the fast guys truly do twist their hips (it's hard to spot if you only see them live or in videos), check out Danny Hart during the Sea Otter dual slalom:
http://www.pinkbike.com/photo/8010913/

Danny not fast enough on that track for ya? Kyle Strait won it:
http://www.pinkbike.com/photo/8010866/

It doesnt matter what bike you ride. You can ride my bikes, Santa Cruz, Specialized, whatever, you can still go out and have fun.

I'd go even farther: you can also be fast on any of those bikes. I love hearing this attitude from within the industry, although it's ironic from a guy who still has ties to DW.

I look at motocross (which I know almost nothing about, so please correct me if I'm wrong), but it seems to me that those bikes are all nearly functionally identical and what separates the brands is marketing and which pro rider happens to be winning races on which bike. They don't have different suspension designs, and they don't sell their "science" or methodology…at least not from an outsider's perspective. Maybe it's different if you read all the articles in the magazines. What they do do (ha, I said do do) is sell like hot cakes.

If someone new to our sport is in the market for a new bike, all the talk about suspension design is going to confuse them, and probably turn them off if anything. I hope Evil does survive and Kevin can keep this sort of perspective. It pains me when a snowboarder calls our sport "gay".

Yes! I don't want to ruin it for anybody, but that was awesome! Gets me all stoked to go.

In other news, the server seems to think it's on daylight savings time, but only on the front page - not the forums.

Some classy answers to some good questions in there. Good interview all around!

When I first heard about DH1, I was completely stoked that Freecaster found a way to keep bringing us great coverage of DH events. However, Linds makes a couple of points that I didn't even think about. I don't know how much, but I think that the top, top guys do make what most of us would consider to be pretty good money (although surely not when compared to other professional "athletes" like golfers and baseball players :P )

I'm trying to imagine how hockey players would react if a second league started and they were effectively asked to double the number of games without a corresponding salary increase. I don't think it would go well. Maybe this is the difference between DH and other sports, but that must be something that weighs on the minds of the top riders as they consider whether to join the series.

1. your riding style may not suit others(you admit you like it more plush than others), it would have been better if there were multiple riders with input. But given the time limit, it's not solely your fault. I ride my bike with almost all compression on, so who knows. There are people in this thread that shared the same outlook of the harsheness, but it seems that they consist mostly of people who were on demo bikes. One person who actually owned it for a long time seems to differ in opinion.

Couple of things to consider here:
1. Every reviewer has biases. As long as they are stated, then readers know whether to accept or reject the review based on how their own biases compare to the reviewer's.
2. It seems that a reasonable person wouldn't buy a bike that felt like poo during a demo ride (although apparently at least one did). That explains to my satisfaction why the people who thought the bike felt harsh didn't have any long term experience on it.

3. Harshness may be a problem, but what were some real factual timed result?
Racecars are harsh to ride, they're very uncomfortable, but obviously they perform. How did the turner perform?
Perhaps next time, since you own time laps(sp?), or some of your friends do.

This makes sense to me. I can't speak for the reviewer, but suspect we would have seen some lap times if he'd had the bike longer.

I liked the review. The DHR wasn't a bike I was in the market for before, though, so I have no emotional investment. Just an interested spectator.

Edit: me type slow. Looks like there might be an opportunity to see a longer-term test. Cool!

People generally have it covered, but I've had my medium 2011 Expert out for nearly a dozen rides so far, and I love it.

Weight is 31 lbs 11 oz including Straitline flats (again, medium frame). I think the Comp might be a touch lighter since it doesn't have an adjustable seatpost.

The two minor niggles I have with it so far:

I honestly couldn't be much happier with it.

that guy should seriously consider getting a hair cut…Dreds are Soooo 1997 and gives Norco and amateur look .

I hate to say that I honestly can't tell if you're kidding here, so I'll have to assume you're not. I've had the privilege of meeting Jay (like, I suspect, a lot of people on here have), and whatever you may think about his hair or the brands he represents, he's a hell of a rider and tireless ambassador for the sport.

I have finally forsaken SPDs after a long relationship. I don't think I'm much slower on the way up and I'm certainly faster on the way down. Most importantly I have more fun.

Demoed the SX on Seymour, fun ride, but keep in mind it has only the one chain ring - no granny…

Er…my 2009 SX Trail has two rings (24/36). Not sure what 2011 holds since the travel looks to be going up slightly, but up to 2010 they have always had two chainrings from the factory. Did you perhaps demo a custom-built SX or SX Trail?

+1 on the fun ride, though :D Despite the weight, my SX Trail is currently my go-to bike for pretty much everything. I pedal it everywhere, but I'm about 180 lbs, fairly strong, and not overly concerned with how fast I get where I'm going. A woman might be more affected by the weight.

Adblock Plus installed - no problems now :)

I think I'll be scanning my machine tonight, though.