I took the risk of stepping out from the house of Maxxis when I built up the Tyee and had a solid week of riding them on a trip to Pisgah NC before a nothing crash broke my fibula (not tyre related at all) and ended my test period for oh about 6 to 8 weeks.

I Can report that both the Argotal and Kryptotal in the Endurance compound have a staggering amount of grip in a myriad of conditions beyond their stated uses. Despite being the harder of the three compounds, Low speed handling was great. The Argos and Kryptos demonstrated no glaring signs of breaking traction on a slow crawl down some fairly impressive slabs in both the wet and the dry.

High Speed grip and performance was admirable as well and despite a weeks worth of rain previous, the muddy chaos of some of the new tracks at Ride Rock Creek (Neko Mulallys new park in NC) wasnt enough to slow either tyre down. They both shed the sticky clay heavy mud with ease, maintaining solid purchase on the soil below, and ran beautifully on the super smooth groomed berms on their flow trails, with no sketchy vagueness moving from center to shoulder knobs when pushing the front wheel hard into hot corners. The Kryptotal RE out back did its job admirably despite being wailed on by a 6'3" 225lb Clydesdale. Only breaking loose into a slide when I pushed it to it, otherwise it was dependable in the back with oodles of bite whenever I hauled on the anchors.

As for wear, despite 7 days hard riding from sun up til sun down, the hairs from the tyre moulds are still mostly on the entire tread. Endurance indeed. And despite fighting with many rock gardens, none of the cornering knobs tore nor show signs of degradation. Now I know its only 7 days, but the last 3C MaxxGrip Dissector I ran made it 3 days of park laps before it looked like an Ikon... further durability testing on the rocks of the Canadian shield will resume once the doc says I can go play bikes in the woods again.

Weather overall on the trip varied from -7°c to daily highs of 15°c, and even with the broad swing, I didnt notice a vast and drastic difference in the tyres grip or damping feel.

The Only con I have found so far is mounting the tyres. The beads are hellishly tight even with all the tricks in the book. And the ping when they seat is a very "did I just Die" when seating the bead with a compressor.

Overall I am very happy about the performance and price of these new Contis, even if my tyre combo sounds like a pair of mythological Greek drug dealers. I dont think Ill be going back to the Big M any time soon. I think with either the Kryptotal FR or Argotal you will be very pleased over the tried and tested Assguy.

Thanks Niels, shes rides like a dream and Im glad to start participating on the forum after gleaning so much info and knowledge over the last couple years of reading here.

As for the few Propains in Canada, Ive only seen one other out this way, but very few elsewhere so far, though that may change as Neko Mulally has them providing his rental fleet at Ride Rock Creek in North Carolina.

But in the end, I couldnt let Remy Metallier have all the fun y'know.  It will be coming with me for summer leave this year on my drive to the Island and it will def be getting a taste of some Squamish and Shore on the way...

I am not worried.  Technology will take care of the problem.

We laugh. But look up the EPIC Healthcare Triage system theyre now running at hospitals across Ontario... Its the pushboard the nurse uses in the previous scene but in text format.  Got to use it and have another 'Shit, Idiocracy was actually a Prophetic Warning' moments while trying to access ER services...

And if I wasn’t a veteran I wouldn’t have been able to access mental illness help after getting hit. Well, unless was able to spend $200 every two weeks for it.

Oh, those supports a year ago where cut by the management at NDHQ by the way.

Oh….wait did hey tell you how resilient you are?🤬

I just recently got to endure one hell of a ride in Both systems, as well as the US Healthcare system. And lemme say, Medical Care in the CAF isnt much better these days brother.

Our MO's and Nursing O's are leaving for the greenbacks once their obligatory contract is done. The rest are getting rode into the dirt, burning out, and taking a mental health 3B release just to survive.

Of the 4 Health Care establishments Ive dealt with since I decided to break my leg on a ride on 19 Dec, overall the American hospital was the best.

In the door, in a room, xrayed, splinted, taught the art of crutch and discharged in 1h45m. However that comes with downsides, had I not had my Blue Cross, I would have been on the hook for 11k USD. If you dont have health insurance in the US of A, you're doomed.

And while here back home we have public funding vs insurance based access. The 11.5hrs I spent sitting in tremendous pain at the ER in Ajax ON after being turned away by their own fracture clinic, with a ortho referral in hand no less, to be treated like a developmentally delayed child by a haughty doc from the UK tells me, we are unwell. Result of that visit? 2x T4's and a Doc who completely missed the blood clots that formed in my calf/thigh after the break that ended up almost dropping me.

And you'd think on return to Petawawa that the Green Machine would take care of its own? Nope. Just a B Surg who says he will handle the referral to the local fracture clinic on 21 Dec... then just doesnt and peaces out on the christmas leave block. Thankfully that was caught by a Nursing O friend who was curious why I wasnt casted, nor on thinners for the obvious clots and she got the wheels turning which finally got me a cast and blood thinners on... 11 Jan!

All in all, Healthcare across the nation needs a massive bolus of funding and reinvigoration. But that comes with a cost and I dont think the body politic of the Canadian public is ready to swallow that bill...

Figured I'd join the party after 3 years of reading articles and commenting for the first time this week. Got those New kid in the class vibes.

Not a North Shore rider currently, stuck in Ontario for now, with occasional trips to Van Island to visit the parents in Mill Bay, but that will likely change in 3 years after Ive finished giving the Crown 20 years of service.

Anyways, On with the Bike(s), having gotten back on the pedals after an 18yr break in Spring '21 on a cheap Giant Talon 3 and rekindling my childhood love of Bike. The Talon lasted 3 months under a clydesdale and was retired to commuter duty as I sought out my first used FS. The Talon was surpassed by a 2014 Specialized Camber FSR 29er that got upgunned with a 140mm RS Revealation and a 1x12 conversion among a pile upgrades and she has performed wonderfully and progressed my ability and skill far beyond what it was. Unfortunately in 2 short seasons, Rider had surpassed bike, and said Rider needed more than 110mm of squish out the back end.

So, I sought out the object of my desires and Completed a frame up build on my dream long travel enduro sled in December, just in time to take it to North Carolina for a little Shredcation away from the Ontario snows.

Unfortunately, all 3 bikes are on forced rest due to a broken fibula sustained on the aforementioned Shredventure... 1 more week til Cast Off/Physio begins and Im really stoked about the Rides 2023 has in store 🤘 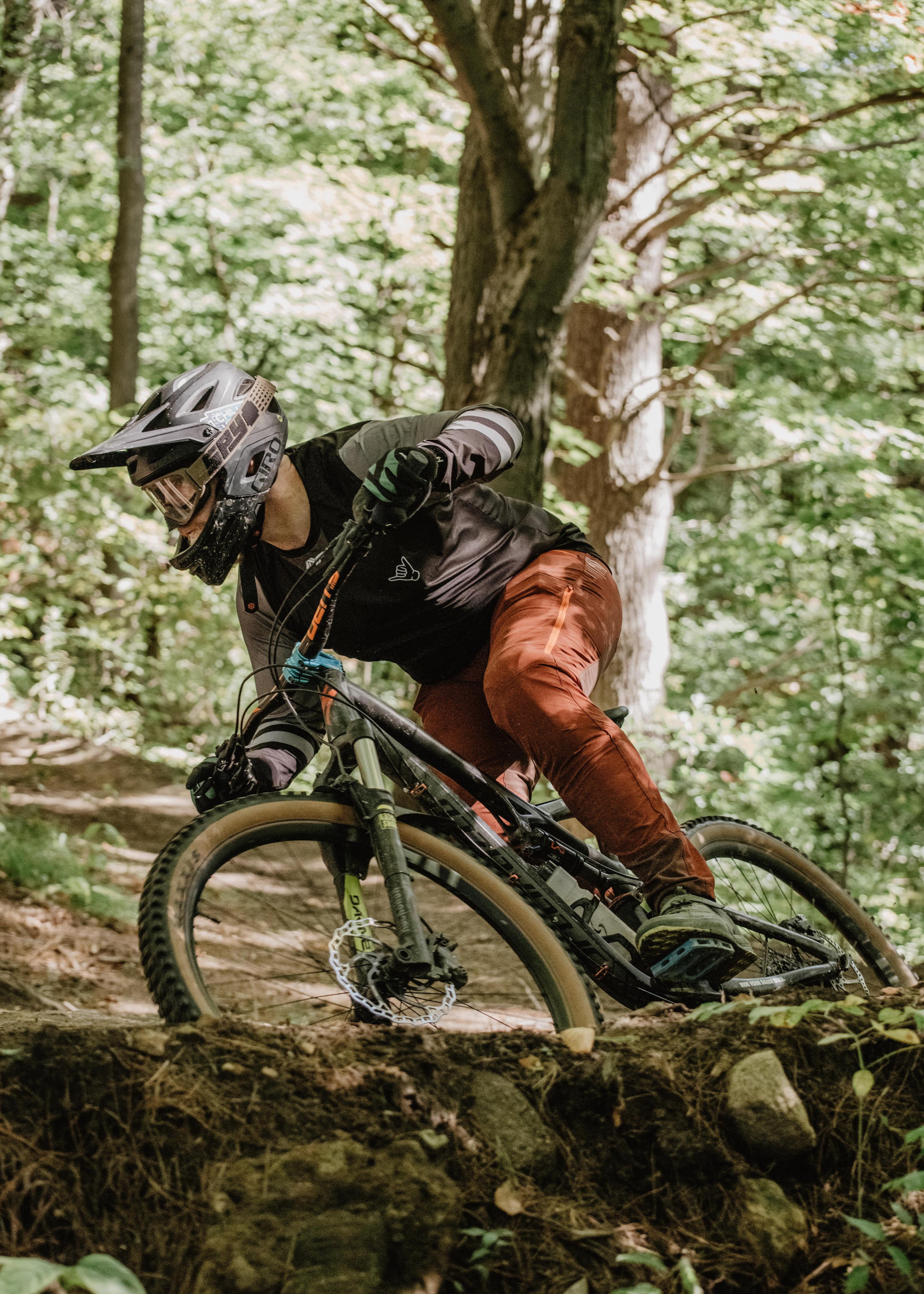