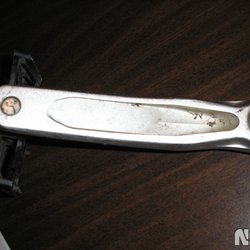 thanks for the info.

Does $100 sound about right to ship a bike from BC to ON?

Does anyone have any experience with shipping an entire bike across a great distance? Is it worth the hassle? Where did you find a box? Did you put it all in the same box?

And about wow much would you estimate for shipping a bike from BC to Ontario?

Is it easy enough to swap a hard drive into an HP? It's not a huge hassle like a Dell?

Also, how many harddrives can I have in one tower? Is there a way to get the computer to treat them all as one drive (or do they each have their own directory?)?

Also, does it matter what hard drive I get? Are they like RAM or do they all have the same connectors?

I've been collecting music like nuts lately (7,500 songs and counting) and am running out of space quick.

Anyone have the lowdown? Is it free and useful, or crappy and annoying?

Any knowledgable input is appreciated.

yea, you broke rule number one of buying shit over the internet. never give money directly to the buyer with the promise of "then ill stick it in the mail…"

Are you suggesting an escrow service? this has always worked just fine in the past.

Just out of curiossity, has anyone here ever been ripped off when they sent someone a money order? Most people would have to be pretty gutsy to rip you off using their real name unless they're on the other side of the earth.

For all he knows I work in Calgary half the time, or have cousins there (maybe he was trying to cover his bases with listing his location in Golden?).

Does anyone know what the rcmp would do about this? As evidence I would have record of the wire transfer, as well as all of our e-mails. If they have his name and address they would do something… right?

isn't this the same thing as if the guy mugged me in the street and tuck $675 from my wallet? Couldn't he even go to jail for this?

Well the update is that I have his phone number and address, and it turns out he's in Calgary, not Golden. Also the account the money was wired to is dead empty.

I'm going to talk to him, and I know some people that can pay him a visit if push comes to shove.

Well it's been a little while since I posted, and I'm going to call on the knowledge of nsmb once again.

Let's just start this off by saying I'm not an idiot about overseas scammers, western union money transfers, money grams, and all of that bs silly people sometimes fall for. I've done a ton of internet deals in the past, and never been ripped off.

Here's where it gets interesting. I wanted to go the paypal route, but instead he suggested a direct deposit into his rbs bank account. I figured this was safe enough, as rbs only guves out named accounts, correct? (this is crucial, so if anyone knows for sure I would be greatful).

So I transfered the money and he said his wife put it in the mail the next day. Well I wated 2 weeks and started to get anxious. He still returned all of my e-mails and said he put a 48 hour package locating service on it from canada post. Two days later it supposedly comes back to him because it had the wrong address on it.

Now he has snt it out again, but it;s been another 2 and a half weeks and I haven't gotten ANYTHING. I'm starting to get very worried, and my dad's talking to the guy at rbc we get our mortgage and stuff from.

So what's your judgement? Have I been ripped off? If so, will the bank be able to get the money back? Anyone live in Golden, give me a PM just in case you have heard of this guy in the community?

Just sitting here stewing all pissed off that I may have lost a pretty decent sum of cash.

Well while cruising the BC buysell.com, I found an interesting price on an ipod video. I e-mailed the guy, and he referred me to this sitein the UK:

Seems VERY suspicious, but what do you think?

decided to go this route instead:

I discovered that my Nikon film lens will work with a dslr so now I'm set :)

So far one of the better retailers I've seen recommended on a photo forum is KEH
Every once in a while they have a used outfit listed for pretty reasonable prices:
$751 USD for a D70 kit now, or 718 for a D50 kit

well it doesn't include the memory card, and it's non-usa.