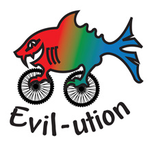 Yeah, be nice if we could just order one made to fit... Actually should probably just start including them with frames too? BUT... I'd gladly buy one for 10-15 bucks.

If they turned the back into something useful like a camper it would be awesome!!! I mean it's cool it carries his tools, gets him where he needs. Just silly to have a HUGE truck that can hold two people and has a HUGE bed that doesn't get used for anything except pretending to carry 2 bikes and obviously costs a shit ton for fuel...?

Just to add info. Look at PB's review of the Warden LT. They call out the short headtube requiring extra spacers for fit which makes the bike feel smaller due to reducing effective reach.

Again, it's not so much that it's "wrong". Just that it's limiting the sizing at the upper end of the sizing chart and may require some to size up. And if your already on the largest size your chit out of luck... :)

Considering the down votes I thought I'd up vote some comments and chime in that I was also disappointed in the low stack height's especially given they aren't doing or advertising a size 4 to try and address it. (maybe someday?) Honestly the the idea that this will fit a 6'4" rider is a bit disingenuous. It would fit "a few" 6'4" riders that might prefer a shorter/lower set up? But I'd guess a lot of 6'2" riders are going to find the front end height an issue and then addressing that will shorten the effective reach and make that an issue. It will work fine for some and not at all for others.

Which "if" there were local bikes to demo wouldn't be such an issue. But from my lower half of North America perspective it seems like way too much of a size risk for taller riders?

Now to play devils advocate, I'd guess they will hit the larger part of the market with this concept and so from a $$$ standpoint it makes total sense. But like others who go with these kind of "compromised" designs to hit multiple market segments it's a double edged sword. Remember when Specialized just added headset spacers to their 29er frames to make 27.5 bikes and most everyone hated the geometry. OR how Guerilla Gravity has to have their mainframe tough enough/heavy enough to take a 180mm fork and so when someone builds a 120mm bike out of the same main frame it's always heavier than other 120mm frame bikes. (but most of the time still cheaper!) :)

Anyway. It is a solid business decision. Just a bummer from my perspective.

(Edit, fairly new to commenting here so didn't realize we started at zero. Thought that meant someone was down-voting it... :) :) :) )

LOL, just noticed this repy! :) Seems backwards. On desktop where I'm reading this the very tiny "editorial" text above the large headline is somewhat buried over that massive Titan picture and the huge headline. (My first impression looking for it was that it did NOT say editorial, then I found it.) And it still has "slash review" after that. On the phone it's actually  a little more obvious "beneath" the titan picture. But still small font and says, "slash review". (however maybe the layout has changed in the last couple of months? :) )

I will grant you my perspective was probably skewed because I came from your part 1 Titan review looking for part 2. And for sure the start of this article reads 100% as a relevant and arbitrary opinion on seat tube angles in response to your colleague. The thing is it's "dressed" as a Titan review, HUGE Titan pick at top. Only the Titan's geo chart, more than a dozen titan pictures, etc. And then in the end you do continue the Titan review specifically focusing on the seat angle.

Compare that to your colleagues article that does show his Geometron at top and his wife's Evil as examples along with finishing with a Norco. But in no way gives the impression that he's reviewing any of those bikes. (also no " |review " on that one either)

So, for my .02 this still comes off as too much of an unwarranted criticism of a particular bike that is doing a more than decent job offering what a very large percentage of customers are looking for. Maybe your right and those customers are just following silly trends? But maybe your colleagues right and those customers are just finally reaping the benefits of geometry that is not in any way restricted by roadbike spec's from 40? years ago. The thing is either way is OK.

Hope summer is treating you well!

Did it change to NSCyclists.com?

Just because I've never owned a luggage or kiddie hauler bike, or "fixie" or "townie" or whatever you call it; doesn't invalidate my perspective on mountain bike geometry. I think it comes down to preference, period. Your "I'm a cyclist" thing comes off poorly IMO.

It's too bad you didn't just write a series of opinion pieces about riders who don't get on with modern mountain bike geometry instead of trying to hide your retro geo thesis in a specific bike/product review. Banshee isn't wrong for building a bike right in the bell curve of what the majority of their target market is looking for. Your not wrong for not liking it. But what's the deal with picking on the little guy for doing what most people want and what most other companies are doing?

Andrew, you should post what angles/overall geo you ended up with to help out others with your perspective on this. (or perhaps when you give your 2nd part of the titan review?)

On the one hand it's always interesting to get other opinions and obviously from the comments your not alone in your thoughts on steep STA's/pedal position.

BUT on the other hand if someone tested a Jamis Hardline and their review on the "SEAT" had this long intro about how they've rode Mondraker, Geometron and Pole all their life and "guess what", they just happened to think the Jamis geometry is too conservative... so they over forked, angle set, got a bespoke travel limited shock with custom hydraulic bottom out to prevent frame damage with offset bushings, concentric BB and a custom Ti linkage and NOW the geo's good.

I wouldn't say it's exactly the same. But when on a steep climb a mountain biker "usually" pulls their upper body lower and gets a little more of the hip angle back.

Sorry for those who struggle with steeper STA's the last couple of years. BUT for all of us taller peeps who have struggled with stupidly slack STA's on L and XL FS bikes our whole adult lives it is about time everyone else have STA struggles! :)

For real though it was great that you blogged your experience. SO many people just spit venom when a STA/Geo doesn't exactly suit their needs without looking into how they could adapt...