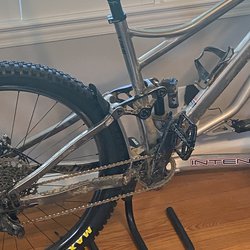 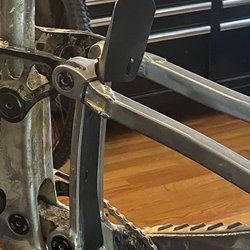 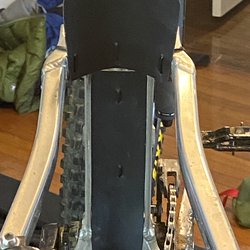 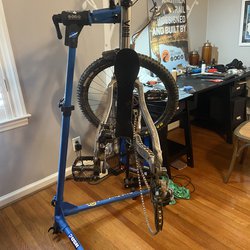 Reading this only reinforces my preference for shifting vs e-shifting.  I’ve ridden this stuff around the parking lot.  I’m very fortunate that I could afford it no problem.

Guess it’s yet another product from the bike industry to help me easily identify people who have a very different ethos than me and with whom I’m probably not very compatible.

I rode clipped in for a long time.  Now if I switch back to being clipped-in I feel way LESS connected to both the bike and the trail.  All the slop in the cleat-pedal interface feels so vague and unsatisfying.  Can’t stand it.

If you’ve never spent at least a year on flats, doing so is almost certainly the single best thing you can do for your riding skills. When people ask about flats, I always offer to keep their spd or other clip-in pedals and refuse to give them back for an agreed upon period of time.  There are definitely going to be some frustrating rides starting out and lots of temptation to switch back.

Also, I have zero envy of reviewers.  I like to get my bikes dialed and then not think about them while riding.  Being on different frames and components all the time sounds miserable.  But, I sure do enjoy and appreciate the reviews!

You didn’t need to give me that much of reply!  Just kidding you.  I have no interest in a bike like this, but like all your other articles, I read it, enjoyed it, and learned a lot.  Well done as usual.

Seems you have moved on from the gram counting article you penned a few months ago? ;)

The WD-40 decal caught my eye and piqued my curiousity.  Assuming they make a chain lube or some other bike specific products?  Anybody know the story on that?

Henry really should have selected his example better. Going back 15 instead of 10 years would have made a world of difference. Anybody who has been in or around the investment business knows the importance of picking your time periods carefully. He’ll figure it out after that first tranche of Outside restricted shares vests.

At any rate, I think Henry took it a little far, but I generally agree that all of the excessive whining and complaining about bikes changing over time is unbecoming to us as a group.

There certainly have been some (probably many, to be fair) stupid and pointless things that are fun to critique, but bikes have gotten soooooo much better. Do we realistically think the industry should have avoided any missteps along the way?

Also, would we expect any other industry to support something like suspension forks for 26” wheels? Do we really think we are entitled to have private companies continue making inferior, outdated-by-at-least-decade, unprofitable products for our little niche sport because some of us insist on continuing to use them?

And I say that as someone who leans pretty decently left these days. Not coming from a right-leaning, capitalism-is-all-good perspective.

Sometimes I think as a group our lack of perspective is appalling (and as someone that does a lot of trail advocacy, terrifying). To the extent that was Henry’s point, I agree wholeheartedly.

Ooohhh.  Centerlock is a great one the more I think about it.  I would be super interested in the take of the NSMB crew and others on here will real industry knowledge.

Is Centerlock a standard that is (a) total sh!t and (b) has resulted in a LOSS of revenue.  I mean, I have to think it costs more to engineer and produce both, and I think they insist on making some components with only centerlock, which has to result in lower sales, right?

Am I totally wrong on this?  If not, other examples?  Probably too early to make the call on Superboost as, god help us, it could still win out.  However, the chance for Centerlock to go anywhere has long since passed.

Yet they stubbornly and defiantly stick with it.

With all the good prebuilt wheels available, going custom generally makes sense only if you are going to spend some legitimate coin on both the hub and rim.  Or, if you just like building your own wheels, which I totally respect.

Could you please clarify for me whether hellions are stiffer than freerider pros (as opposed to regular freeriders). Very hellion curious.  Thanks!