It needs a 34, larger volume tires, and to get rid of that remote on the bars.

It would have been nice to see some riding. Maybe not that day, but it seems like that riding has been involved in most other hey neighbor shoots.

Out of curiosity, do any companies make non-N/W oval rings?

I would be very curious to try one myself on my Singlespeed (in theory the slow cadence uphill slog of 1-speeding is where they would be most advantageous/notable) but I only run 1/8" track trains -- they work fine with 8/9/10spd rings but not N/W.

You you want to run an oval ring… on your singlespeed. Are you attempting to use science to keep the tension continuous?

Any other cheap stuff around?

Scott's pretty fit… but I don't think he is flexible enough to bend over and grab his ankles Cove style.

no need to drop my pants to sell bikes here. Knowledge and service.

If you are moving beyond the Chromag brand name, best check out the Lynskey Made Kona Raijin: http://www.konaworld.com/bike.cfm?content=raijin

Super similar geo to the Surface (comparing frames with 120mm forks, 18-19" size), Lots of sizes made, 44mm headtube, great sliders if you want the option to run singlespeed (or if you are running 1x10 and want a shorter rear-center).

The only negative that has come up if a shortage of dropper options (27.2) if you swing that way.

I wasn't a fan of the PF30 BB at first, but RaceFace makes a great PF30 BB (I run it with Shimano cranks) that I have been getting great life out of, and this is the stiffest Ti frame I have ridden in terms of out of the saddle hammering.

There are a few (three, soon to be four) guys I regularly ride with running them; Some geared, some single-speeded, everyone is really happy with their purchase.

Here's mine when it was first built up: 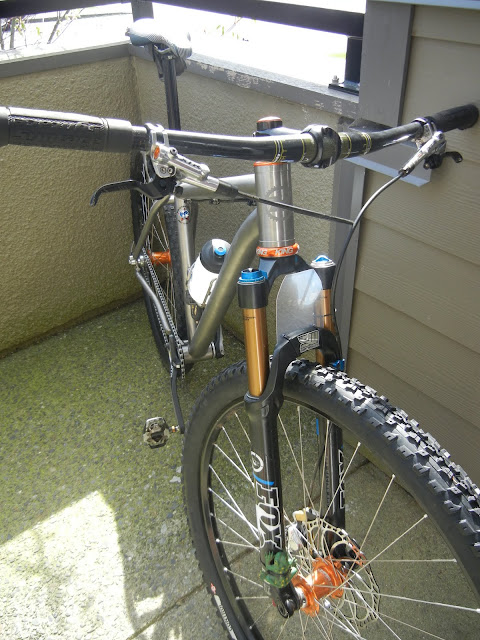 Lets see it built up now ;)

I guess I was in an analogous situation 7 years ago, having lusted after the handbuilt Brodie's and rm's as a kid. Once I finally had some real money (not mine!) to throw at a frame, the chance to buy a rugged enough for bc hardtail made by mike true love was too good to pass up. Chromag was a start up then, my samurai was the 57th frame they'd produced. She just got a new coat of rust inhibitor and a headset pressed back in, getting ready for some soggy season fun

That's sweet to hear. My friend Ryan, has a 7 year old Chromag Gypsy light. It was previous someone else's bike and he has been shredding it for the past 7 years. He's updated the parts, and is also looking at freshening it up with a fresh coat of paint next season. Over those 7 years dual suspension bikes have changed a lot…

Now get a Dekerf style Surface in TI and never look back. Now that's a pimp ride!:thepimp:

Totally agree, well, a Ti Chromag that is. The more to Ti is really expensive, though. I believe that there has been a lot of talk directed at the Chromag boys about making a Ti Samurai, and now a Surface would likely be more saleable, but there's always resistance. I think, 1) there is a lot of risk in making a frame of that cost and hoping people do in fact buy them, 2) maybe they are truely all about the Cromo and Ti isn't part of their soul. I still think that they should make a limited run of 25 Ti surface frames once per year. I am sure that they would sell as there are currently line-ups to order a Surface.

I would love to try out one of each with identical build kits to see if there is any difference in the ride quality.

You will likely find less of a difference in ride quality. Though the lighter, tubing may offer a less harsh ride. I would say that some of the Surface owners want to have the details that are in the chainstay area, and brake mount area, and the face that it`s welded by DeKerf. Others that want to try the experience of a 29er, a hard tail, a chromag, or a combination of all of those may want to save some coin and get a Rootdown.

sure, a 29 HT presents different challenges on the way down but feels like cheating on the way up!

anyone know the difference between a Surface and Rootdown?

Its all in the details. The Rootdown is made in Taiwan, is not made of True Temper Super Therm tubing, so it weighs more, and it does not have the defining details throughout the frame, but the geo is the same.

Hope I can get some real tires for my Surface soon! Any Specialized 29er tires in stock at Steed?

Thanks very much. Unfortunately we are waiting for new stock of Specialized tires. I hope they get here soon. New Purgatory, Butcher, and ground control 2.3 will be nice to have.

The biggest thing will be when you all actually get to ride these bikes on your home turf. Riding a 29" vs. 26" vs. 650B without listening to what you are supposed to feel.
How many of you have actually ridden a 650B bike?…