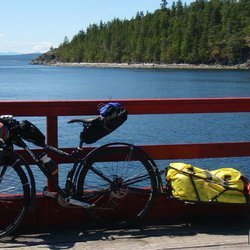 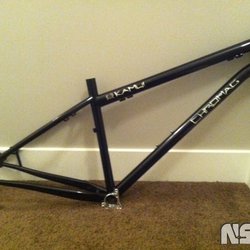 perfect for dorps to tyranny!

ahh the river of gold.

talk about an eyesore. no wonder hikers dont like stunts.

attack of the paparazzi!

It will grow back. It was second growth that was logged. The stumps behind the rider are from the first time it was logged ~ 80 years ago.

ummm….the trail is in the WOODLOT. its not a freaking provincial park.

Cx bike would likely be a challenge. Word is a shorter lap this year, so likely 20-25mins per lap. Course is posted on UROC FB page.

thing effing roosted, and it was throttled back to only 75%.

Hence my concern for trail impacts.

I haven't ridden down there lately, but friends have, and things are good as far as I know.

these kranked bikes are pretty dope ( in the correct enviro)

Last time I rode Sprockids I saw a couple of these roosting the shit out of the trails. Is that the environment you speak of?

In our area, the most heavily moto impacted trail network is actually in a Provincial Park that is close to a trailer park / homes on the edge of town. BC Parks does not have the manpower or desire to pursue an enforcement approach. They prefer an education approach, so we have a number of no-moto signs (official) that regularly disappear or are vandalized. Tomorrow I am heading out to install 2 more at a popular moto access point.

For ATV's, the best deterrent is a narrow fully benched trail cut across a steep sidehill, not sure what will deter moto. I have found that the moto use decreases as other users on the trails increase, so we rarely see moto impacts in summer/nice weather. It's usually fall/winter/early spring when the odds of running into mtb'ers/runners/hikers/dog walkers is decreased.

The offenders are not moto-club types, just yahoos with dirt bikes and are typically half cut at the time.

Who's land is the trail on? Guessing the trail is unauthorized?

Get a 29" rigid surly fork if you want the fork A-C to remain similiar to a longer travel 26" susp fork. I ran a Karate Monkey fork on my 26" hardtail for years. Wrists will suffer if you ride trail full rigid over a long period of time. At least mine did. my 29'r is still set up full rigid though.

No representatives of Velodirt/Oregon Bikepacking were present at the start. About 150 folks were at the Maverick Hotel the morning of the 22nd. There was no meeting, at 6:55 someone yelled '5 minutes', and at 7 someone yelled 'go!', and we all rolled out of town.

Although the route feels remote in spots, it is not actually that remote in terms of consequence. (Lots of bail out options), therefore I think it attracts a lot of folks who are not that experienced in wilderness camping. Given that most folks are 'stealth camping', if they are not dealing with their shit/garbage appropriately, you have a mess.

Would I expect Donnie to do more? No. Adults should be able to figure this shit out.

Is it naive to expect a large group to behave respectfully? Likely.

Well it was harder than I thought it would be. I definitely underestimated the difficulty of the climbing in the last 200 miles. There are some steep sustained grades. RidewithGPS says something like max 9% grade. There are many pitches over 18%. The last 100 km include the 'rollers of despair' section, a 60km long series of rollers that require a hard effort to crest the hill before you quickly descend into the next swale and the beginning of the next climb. Soul crushing after 500km in the saddle.

The scenery is pretty cool throughout, but the northern half is definitely more scenic imo. That being said I didn't see a lot of the route as I rode straight through the first 2 nights. Rained on and off the first 24 hours, then got warm, sunny and windy. I had heard horror stories of the head winds descending to the Deschutes River. They were true. You have to pedal while descending to keep moving forward.

My 'race' plan was to ride through the first night and crash out in a park in the sun the next morning in Prineville, and then decide on how day 2 would play out after a good nap. When I rolled into Prineville at the 27 hr mark, I stopped in at the LBS, Good Bike Co. The owner was following the event and told me that there were only 5 guys ahead of me. So I figured I should keep going, no naps, finishing at 4am the following morning. 586km in 45 hours total, 35 hours in the saddle, straight through. I never rode fast, I just hardly stopped. Don't know for sure, as it is an unorganized event, but I am fairly certain I finished around 7th, getting passed by 2 fellows from Idaho, and passing a fellow from Victoria in the night before the end.

The loaded rig. Carried too much food and water. So much food that I wasn't close to running out at the end, and I never had to stop to filter water, with 2 fill ups of tap water on route.

As you may have heard, some folks who camped along the route made a bit of a mess and disrespected the friendly locals. It appears the 'organizers' have walked away from the event. http://www.oregonbikepacking.com/the-death-of-the-oregon-outback/

Was it a cool route? sure. totally different that what I am used to here on Van Isle.

Would I do it as a tour? (e.g. 3+ days?) No, I just didn't find the camp spots (not that I camped) to be anything special, other than along the Crooked River, but that was full of car campers.

Would I do the route again? no. I could put together a scenic 600km route on Van Isle with a remote and killer camp spot every night.

My Bike Packing / Touring Rig. I can also run Panniers with OMM racks if the trip is more pavement oriented, and I need more volume. Photo taken 5 mins before the start of the 2015 Oregon Outback.