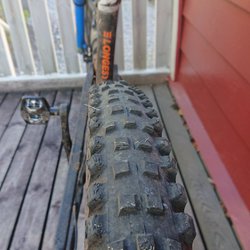 Yup, with shorter wheelbase you can get closer to the rider in front. At high speed every cm makes a difference! Also in a peleton it's nice to have a shorter bike meaning less wheel overlap, and thus less risk of a crash when people move sideways.

All that said, now that i have given up serious racing i'm on a far bigger frame with shorter stem. So much nicer for all other use than pure racing :)

I've broken my fair share of stuff over the years, and always have gotten good warranty support. Amongst others I broke a GT frame back in the day, 4 months past the warranty period. I asked if there was a possibility of getting a replacement for a bit less money, but ended up getting sponsored :) So that was the most lucrative broken frame ever!

Also broke 4 Commencal frames in one season back when they had problems with carbon layups. And those really were JRA, one frame broke when i pedaled uphill. The last Commencal frame i got on warranty i sold to a friend (with the promise to handle any warranty issues that might arise), and he is still riding it 10 years later so i guess they figured out the issues in the carbon layup.

For some parts I think that a good crash replacement policy might be better than warranties that try to include too much. Carbon rims for example would be such a thing, that way it should be easier for companies to keep initial cost lower, instead of spreading warranty cost on all customers. But maybe that is a non-issue? Anybody knows any stats for breakage on modern carbon rims?

I think that many companies do themselves a disservice when they try to give optimistic delivery times, or give the estimated delivery time based on everything working perfectly. That creates expections that they will struggle to live up to. Add that most companies are pretty poor at giving regular updates on status. It's not that strange that the customers ask where their bike is when you are a month past the expected delivery date and they have recieved no news.

I am currently waiting for a bike, which had a 12-13 week expected delivery (up from 8 weeks in normal times). I am now at 22 weeks from order date, and i get no updates unless i ask for it. The slow delivery is not a problem for me, it is winter and ski season, but just having some kind of regular update every 4-5 weeks would be nice.

In the past i ran a ski company with production in other countries, so i know the issues. The customers are very understanding of delays as long as you keep them informed. If you just take the money and then don't give them any info, they will get annoyed and rightfully so.

Agreed, more and more are catching on :)

Last bikes look really good, and have really good value for money on their alu bikes.

I think Cotic has one of the best around, with good base set-ups and then you can adjust most components. For the Stanton that I ended up getting the base builds are good, but you have to know what you want specifically in order to get any changes.

Agreed that some adjustability is great, but i'd like to extend that to the components as well. Most bikes from mainstream companies end up being way too expensive when you have adapted them to what you want. For example, if you want top end suspension, you also need to pay for high-end shifting that is expensive and really doesn't give that much more performance. Also brakes often need to be changed or adapted. Wheels are sometimes also something that you would want to change (looking at you RM speccing DT370 on high-end bikes).

Buying a frame and building them up is certainly expensive, since they charge even more than most small companies for a frame.

I've ended up buying niche company bikes for several reasons: adjustability and value for money are definitely up there. But of course it is also kinda cool to have something a bit different :)

Right now I am waiting for a Stanton Switch9er FS to replace the Geometron that I had.

Did you try with even larger rotor in the back? I'm trying it out on my new bike (whenever it shows up in these Covid times) to see if the heat management will be better. Following the logic of having a large rotor in front for power and in the rear for heat management.

In my pack i have a multitool assembled from several old ones, it is great, and has all the functions that you really need. But it's not my favourite. My favourite tool is a Park Tool MT1 that i've had since the mid 90's, it lacks the t25 but other than that it is a nifty little tool for those short rides when you take that tool (with quick links taped to it) in the pocket and head out the door. If Park tool could update the MT1 i would buy it in a heartbeat!

As Tremeer023 I have a Moxie, where i started out riding it at 425mm. Eventually i went longer and longer and am now maxed out at 441mm. Seems like most Moxie owners are going that way, and especially those that ride tech trails. The stability is a lot better on rough trails and flat corners are easier to rail.

If i was riding smoother trails with bermed turns long chainstays probably wouldn't matter much, but for steep tech riding it is so much better! Manualling, take-offs off lips and going over square hits is something you get used to quickly and adapt the balance and timing.

That is so much better than the huge spacerstacks that you see all around!

That Doctahawk should get a good inch longer reach with that bar :)

That is oh so nice! Congrats on a nice bike, i would have gotten the same if they had my size in stock.

Comparing geo to road bikes might not work fully since road bike geo is restricted by regulation. You are not allowed to have the tip of the seat closer to the bb (think vertical line up from the bb) than 10 cm or something. This is where the snub nosed TT seats got popular for example. Many pro riders are just at the limit for seat position though, but they also have actual reaches to the handlebar that are pretty long (130mm stems ftw).

Back to the core question: it's all in the details now, and all those added make it so much nicer to be a mountainbiker. I notice that i keep the bikes longer and longer, but get much more picky about shorts, shoes, pack (yeah, still use that!) and other gear. It has gotten so much better in the last few years, especially shorts!

Check out Moonlight Mountain Gear ( www.moonlight.no ) , they make real high quality lights. Around here those are what pretty much everybody has ended up using for MTB and skiing. They deal very well with rain and cold, and the lightbeam is really good.

Yeah, go for it! It is a really nice bike so you should get more than you expect. Recently sold my full-sus and got about 1000.- more than i would have gotten for it last year. Sold in 24 hrs....