To be honest, I think the dropper was the single best decision in that build -- it makes switching from XC riding to anything more... fun ;) way nicer -- and it's one of those saddle-lever actuated things so no remote to maintain. The QR is built into the frame and less than amazing though.

I keep getting surprised by how versatile the frame is -- who thought ~10 year old XC bikes handle amazing for some trials-y jibbing around, loaded touring, and -- gasp -- XC riding.

Heh... my Walt clone is a 26", 71° HA, short wheelbase bike with 60mm moto risers and a BMX stem and 2.2" tyres. It's got a modded dropper to fit a particularly pesky sized but lovely riding Reynolds 853 seattube, but I still suck at riding the thing. I'll post it when I get some proper shots of it. Seems like we need a rigid bike thread ;)

Am I doing this right?

I can only second that sentiment -- my moxie rides way better with longer chainstays. Putting the wheel further behind me translates to more balanced feel given the long reach, and less jarring impacts coming through from the rear.

In my experience riding my Moxie at short (~425 and less short ~435), less short delivers a more balanced and somehow equally flickable ride at 470mm reach. Longer chainstays all the way!

To add another voice to the choir:

I've been running a 10spd saint shifter, deore m6000 mech, race face aeffect cranks with a steel ring and a CSMX3 with great results, acceptable price and who knows how many miles now. Seeing buddies constantly have issues with repurposed coke cans stamped into derailleur-shaped objects on 4k$+ bikes really bugs me.

In my experience, the Bird Aeris AM9 isn't too hard on the kickback either, even with 54 engagement points. But it stiffens up under pedaling, so flat bumpy corners are best approached with a lot of entry speed and minimal pedaling. Not sure how transferable those observations are to a different (albeit similarly behaving) rear end.

I second that it climbs amazingly -- I run a coil shock with no platform on it and I don't think it's holding me back.

Yeah, but they intermix all the threads of discussion if applied to comments...

Compromise: Change one thing at a time to make analysis easier.

I echo the observation regarding flat levers; pumping some awkward dips became much more natural once I made the adjustment.

It was a set of RF Aeffects without the self-extracting bolt configuration. Other than requiring an ISIS/octalink extractor to remove, the torque rating is crazy high on those -- 60 or 70 Nm no less!

Long story short, the crank started constantly loosening on the splines, which prompted more and more tightening from yours truly, until one day the allen head stripped clean out.

Lots of cursing ensued, none of the screw extracting tricks I applied worked, and I finally had to concede and write off the cranks. Because at some point one of the crank spacers snapped, there was enough space to get the angle grinder between BB and non-driveside crankarm. I even managed to take off the nice oval ring with little to no damage.

I check my other set of Aeffects regularly, but the self-extracting crank bolt is way less troublesome.

Buddy's got some old Saint levers he hasn't got any use for. Going to try throwing those on there I believe, unless anyone knows a reason I shouldn't?

You might want to check against the frankenbrake spreadsheet:

Is anyone on here still running 10 speed?

My geared bike is currently not geared, but it'd usually run a 10spd saint shifter, a deore m6000 10spd mech (or an older XT if I can find the missing parts for it), HG54(?) chains, on a fc mt700 crank with 34 shimano ring and an 11-46 sunrace cassette. Works pretty well, the range is enough for me on a 150mm 29er platform and I don't have to drop that much dough on wearables. Then again, a singlespeed drivetrain in 1/8" with stainless steel ring and steel cog costs as much as that cassette, so it's all relative.

Posted by: velocipedestrian
The 'official' shimano bleed is top down, so the gunge is more likely to collect in the caliper.

I've heard the theory that the servo-wave amplifies any bubble issues, as the lever has to move further. But the m9000 race lever mentioned doesn't have it, so no more clever thoughts.

The theories I've heard involved the port connecting the reservoir at the lever to the rest of the system being small enough to restrict oil flow, causing fluctuations in the active oil volume between brake actuations in quick succession. Of course that might in turn get amplified when enough contaminants are in the system. Why rear brakes in particular seem to be more fragile in this regard I have no idea, but that's been my experience with all shimano setups -- rear brakes require more frequent bleeds for me, and the quirky shigura I mentioned is also a rear. Small sample sizes between three brakes and suboptimal bleeding in some cases, so not enough for a definite conclusion by an armchair... I mean message board engineer like moi ;)

Posted by: RAHrider
Does anyone know if the shimano wandering bite point is solved by replacing the caliper with a magura?

A buddy and I have been fiddling with a M9000 XTR Race lever + MT6 caliper combo and so far weren't able to resolve the wandering bitepoint despite repeated bleeds. Whether it's due to shortcomings of bleeding technique or an inherent issue at the lever I can only guess so far.

Isn't a Singulator a reliable single speed option? i like shorter chainstays to make the bike easier to get on the back wheel etc so the thing i never really liked about horizontal dropouts is that it makes perfectly short chainstays too long. Sometimes you get lucky with your gear and the chainstay length but I'm just as happy to run a singulator.

Sprung tensioners are noisy and sensitive to chainline, frame flex and contamination with thick mud in my experience and depending on the frame, longer chainstays might actually feel pretty nice/better than the short setting, but that's obviously personal preference. Also think of the clean lines!

I had a ~1992 GT Tequesta set up with a fixed tensioner at the BB, that worked pretty nicely, but even there noise and friction were more significant than on a nicely set up bike with an EBB, sliders or track ends.

A dorm I lived in had a similar solution, and while it was alright, it got fiddly quick because of the tight space and overall chaos, as well as tight fit between tyres and hooks. I imagine it would work better if there were less users and a more orderly surrounding, but the core issue I had with it was that bikes became a double pendulum with a floating top pivot...

second,I think an off road ss makes way more sense than bikebacking. I would have thought the opposite until I started riding my gravel ss. The range you want when including gravel/pavement in your riding is pretty large. On dirt you can get away with an easier gear. To be honest, I ride faster with a ss off road. On my gravel bike I run 36x16 which runs 28kmh at 90rpm. I regularly spin out on flat pavement. At the same time, there are some hills that are near impossible to climb in north van. Also, on gravel/dirt you don't get enough traction to drive such a big gear.

Definitely give ss a go, but it is the most fun imo on an mtb.

I would tend to agree -- depending on the terrain you want to bikepack, a singlespeed might involve a lot of spinouts or walking. I did a ~600km bikepacking ride this summer on mostly gravel roads, some singletrack and plenty of pavement. The flats were excruciating on a 34x16 gear with 26x2.2" tyres and a headwind. Other than that, I was very happy with the gear choice, but that's down to adjusting to riding singlespeed. So gearing is definitely something that needs figuring out, either by riding the same bike in comparable terrain, or by carrying an extra cog + tools if that's possible. I was surprised how little the additional load affected my gear preferences though -- I ride the same bike with identical gearing as my commuter and XC bike locally and it's just as fun. As a contrast, my suspended mountainbikes get more dedicated gearing (32x19 and 34x18 on the hardtail and full suspension, both 29ers in the 160mm travel range), which is pretty much only good for "winch-and-plummet" style riding. I wouldn't go bikepacking on either unless I had access to a route which is mostly fireroads and proper trails. Finally, my 50x17 track bike is limited to daylong rides, as at about 100km and 1k meters of elevation I tend to be exhausted enough *without* additional gear to lug around.

(Disclaimer: I run all my bikes as singlespeeds/fixed at the moment, so I'm heavily biased)

Now all you slow-to-conform single speeders will have the ‘option’ to ride bikes a better way! 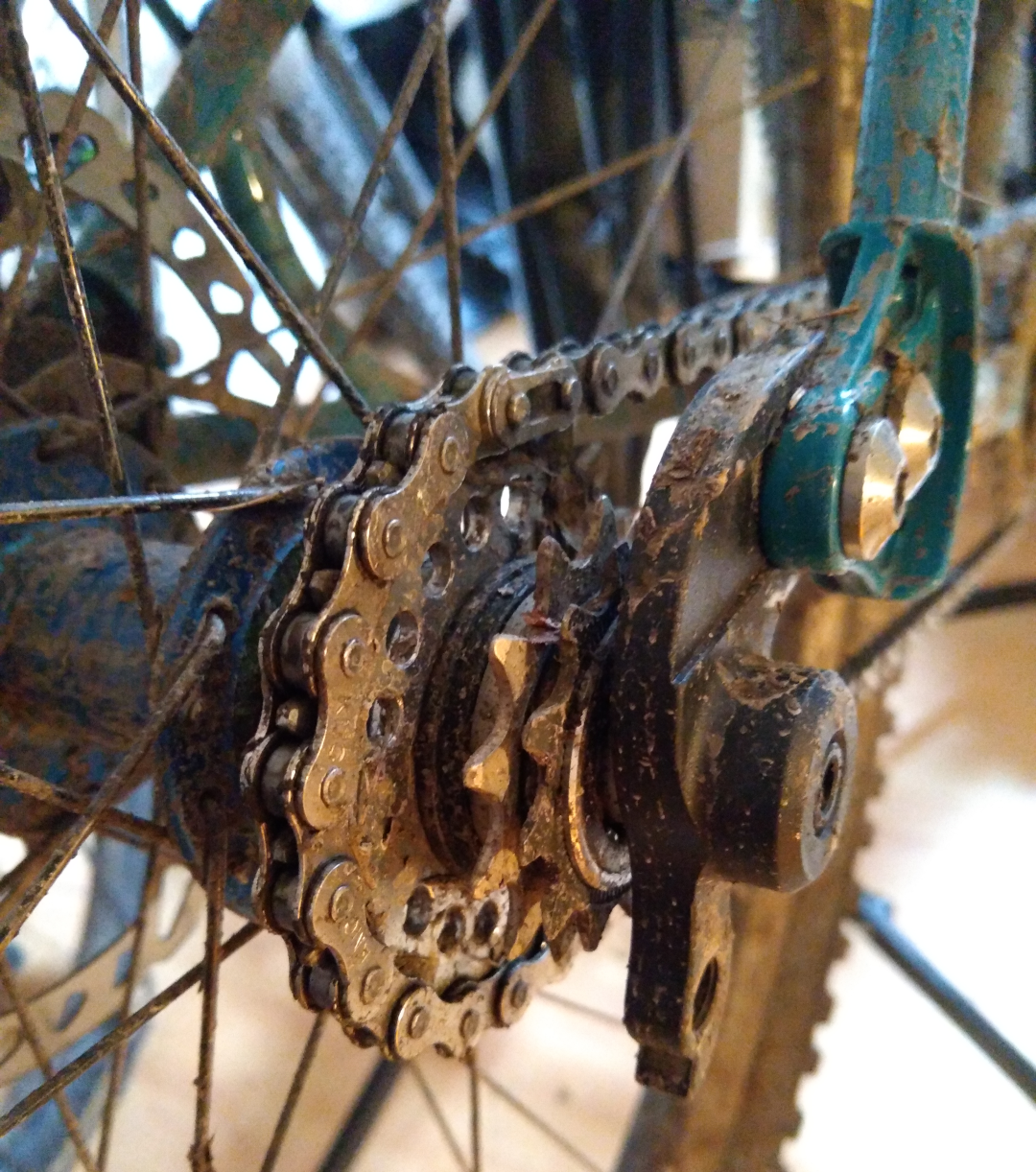 Even Singlespeed spacers have to be scavenged from the dark corners of various parts bins. And the cleaning gnomes in my workshop are on strike...

I'll post a proper picture of the build once I have it all together ;)

How was the High Grip on the rear in terms of drag?

The High Grip Judge on my Enduro bike's rear is certainly not fast, but I didn't feel significantly more exhausted running it instead of a MaxxTerra Agressor on my local trails. The wear is significantly quicker than MaxxTerra though, but so far after a season of riding, plenty of life left.

As a super-nerdy aside:

The cranks are a form of suspension that I think is overlooked for hardtails. I don't think you want crank-arm flex (worst case, arms hitting chainstays, but also losing energy to lateral flex that can't be recovered), but I think torsional flex (not bending) of the crank spindle might not be such a bad thing. Picture yourself riding with your pedals even on rough terrain and torsional wind-up of the spindle allows the crank arms to go from being parallel to each other ( - -) to a subtle inverted V shape ( / \ ) damping out some of the force of an impact and preventing it from being transmitted into your feet. If the torsional flex was large enough, it might also even out pulsations in peak pedaling force by winding up only to spring back and release some of that energy in the dead part of the stroke. The challenge would be to get the torsional flex without getting bending flex (which would be hard on bearings) A smaller spindle with outboard bearings might give a good torsional wind-up while limiting bending and keeping shear strength up (the weak point of my square-taper). A possibility for a Chromag Crank Concept... XD?

In my personal experience and perception, I rarely have my weight completely evenly spread between the two pedals when riding over bumpy terrain -- I'd say this is due to the cranks being roughly horizontal but my legs being in different positions, of slightly different strength, and so on. So when I absorb hits from the rear with my legs, the cranks will move around anyway. I don't know if your suggested torsional flex approach would make a noticeable difference in that situation. That said, I tend to push more of my weight into the fork than on a FS bike when riding the hardtail, and it's steel, with outboard bearings and a 24mm spindle. Regarding pedaling, from your description it sounds like oval chainrings try to solve the same issue (successfully in my opinion, my hardtail is easier to pedal on steep, loose surfaces in 32:18 with an oval).