They are all so personal, but for me the 7iDP projects are super comfortable, but seriously warm, as they are basically a thick leg warmer, with a big pad attached to them. They would be my heavy duty go to pad I think these days.

For lighter duties, i've never worn anything as comfortable as the Dainese Trail Skins 2. I came across them by chance after forgetting my pads for a ride, borrowed some & they were mega. Came home, ordered a pair straight away.

The mudhuggers are pretty flimsy compared to the RRP in my experience. But when the mudhugger gets bent, you can just pour boiling water onto it and it goes back to it's original moulded shape.

RRP for though - it's the bedt i've used by far. The Mudhugger ended up in the bin after trying it :)

Haven't taken it off since actually. I know as soon as I do it will start to rain.

As you have found out, you can't run an angleset on the Spec due to the cups being integrated into the frame.

What you can do to slacken it out is the offset bush in the front mount of the shock, and you can also run the 650b Enduro shock clevis, which slackens the bike out - it's quite a common mod on the Enduro29.

Slightly different look for the Madonna this year, the black has gone (mostly because the British weather & a few uplifts had battered it). So went paintless. Now spent some more time on this thing & continue to be impressed. Despite it's size and weight, it really does crawl up everything. Coming back down is a test of nerve. Looking forward to getting racing on it now. Back in BC for a month this summer & really looking forward to riding this thing out there :) 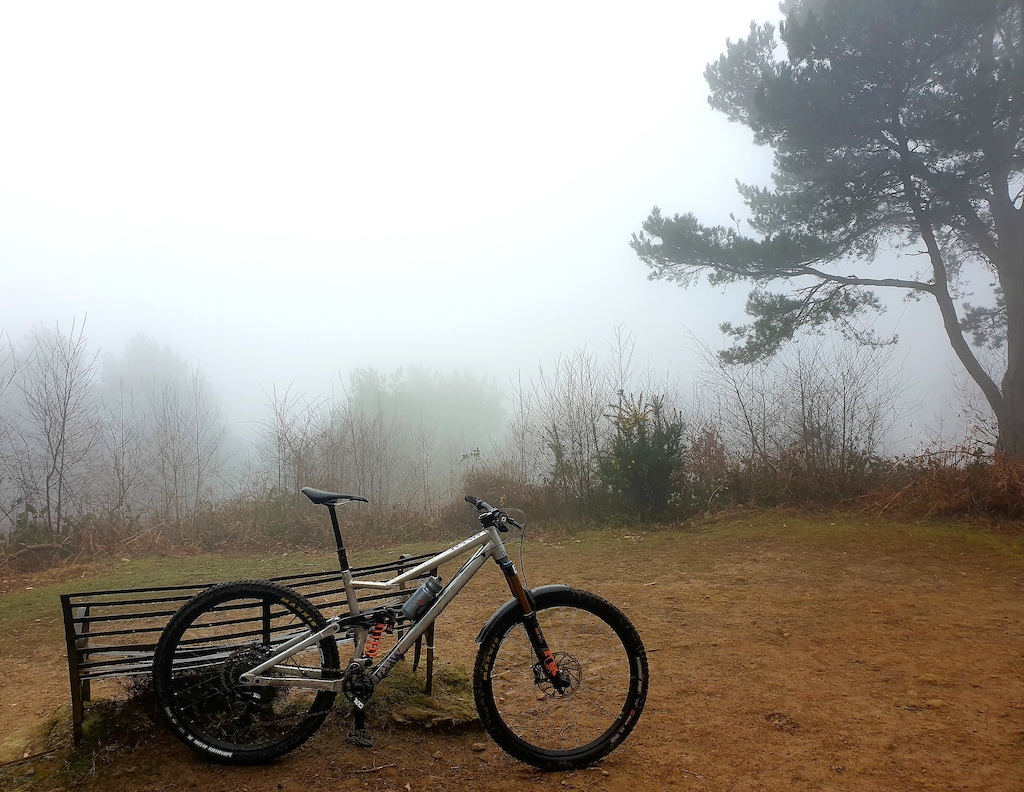 I ran this setup on an XX1 cassette. The main body (1-10) being made of steel is crazy durable. I think mine had 7000+ km on it and it would still take a new chain. put it in a parts washer & you could barely tell it had been used at all. The big 42T did wear (although still lasted quite a while) so I replaced with a One Up cog & it kept on going.

New bike has X01 Eagle on it, that's the only reason I stopped using it. being the same construction, I expect it should do just as long :)

The 160/140 of the Sentinel is a pretty good sweet spot. I find mine quite nimble. At least for me I don't think the 140mm rear end gets in over its head unless you are smashing medium hits at Mach Chicken, or if you are on the brake bumps in the Park. Other than that it's pretty solid pick for a in between bike. :-)

**disclaimer this style of bike is a rear wheel destroyer. I'm on rear wheel #4. It takes you into the gnar at all the speed of a bigger bike,,,it's just kinda runs out of travel hahaha

How are you finding the pedalling on the Sentinel? Read a couple of reviews and the gist of it seemed to be that it is more capable than most 140mm bikes, but also that it pedals worse and feels less nimble than similar travel bikes.

Given it's weight, I found the Sent pedalled as well as could be expected. None of this 'climbs like an XC bike sh*t' but in the mid setting on the shock, it went up fine & had very little bob. I found it still had noticeable wheel flop on slower more techy stuff, but I expected it to, compared to what I am used to.

Where I found it suffered was racing more than anything. It felt very soft and mushy on the pedals, which combined with a low BB meant care was needed when trying to put the power down on something rough. I clipped a lot of pedals on that bike.

I have found the Raaw climbs better so far for comparison, which for an even bigger bike was surprising. When I say climbs better, again, it's all relative, compared to my 26lb Fuel 9.9 it feels heavy, slow, lethargic but for a 15kg monster truck, it just keeps going up stuff I would have trouble taming the front wheel on the Fuel with.

I put it down to the (much) longer stays & mega steep SA. In terms of nimbleness, I don't find these massive 29er's overly nimble, they are a bit more of a 'Hulk Smash' style of riding :)

wow. extremely high marks for total uniqueness. where the heck did you find that used, surely not in Canada. did it come with the coil shock? would love to hear your riding impressions and how it feel about it's size compared to the xl Sentinel.

Funnily enough on Pinkbike - was very lucky as I was considering one anyway (along with the aforementioned Pole) but the juicy price of both was putting me off. My Sentinel was a L, so a little bit shorter, but gave me enough of an idea that it was going to work out, based on numbers alone. Yes it did come with the DHX2.

Ride impressions so far have been a bit limited as i've been injured for a while, but it does address a couple of the issues I didn't like about the Sentinel. Both have a similar feel, in that they are 'very' solid. Both are crazy low & certainly love corners. My biggest frustration with the Sentinel was finding the right balance on the rear shock, it was just a bit awkward to set up & get it working well. I found what felt right when riding for fun was not great when racing, blowing through travel & bottoming out everywhere & vice versa when coming off a race weekend. Tyre clearance on the rear of the Sentinel is a joke, a 2.5 WT was way too tight on the linkage bridge & if you slapped a corner a nit hard you could buzz the stays easily. Oh and the classic Transition paint quality issues :)

The longer stays of the Madonna are a new one for me, but they certainly make the bike feel super stable & balanced? At 188cm i'm fairly tall and it feels nice to be a bit more central on the bike. The STA at what, 78 degrees is a bit of an eye opener. I thought for its size the Transition climbed reasonably well, mostly as the STA put me a decent bit further forward than the Fuel when you allow for the full height post. At 78 degrees it feels like another notch again - I feel right on top of the BB and given it's size/weight it goes up fine. Not PB levels of hyperbole 'climbs like an XC bike' but no issues.

My one word answer would probably be fast. It really does just monster truck through stuff & it's a bit of battle of self preservation & the desire to brake Vs hanging on for life. I'm keen to race it & see what it's like against the clock :)

That got built up, raced a couple of DH races & EWS’s

Interesting bike HobNob - I wonder how it will hold up.

Ha, it's still an event for me to get to do one or two of these!

Interesting to reflect on doing them too - the standard of riding across the board has gone through the roof over the years, but I live in hope that I still get to do Whistler again next year (might be in the new 100 category now though, as it looks to be super difficult to pre qualify for the main race).

But then it's also a bit crazy that chumps like me can race the same race as Sam Hill :)

Being firmly in the big wheeled camp for a few years now, my poor ’17 Fuel 9.9 ended up dying in the Alps this summer.

It did end up with a longer fork, coil shock & did 1.5 seasons of racing enduro & DH so it was somewhat out of it’s comfort zone. Great bike though.

Trek were, as expected, amazing to deal with and swapped me out to a new 9.9 frame, with shock. At that point I decided to put it back to how it was intended, a light, 130mm trail bike & I’ve been enjoying it ever since. There is something to be said for a super light, fun trail ripper. It’s also nice not to have to try to do everything on one poor bike.

It left a hole for me to build up something a bit bigger (and heavier). With another season of racing, a month in Whistler planned & a few other riding trips, I wanted something big & burly. I used a Sentinel as a bit of a tester, as they tend to come up dirt cheap second hand. That got built up, raced a couple of DH races & EWS’s & decided it was the way I wanted to go with bikes.

Anyway, along came what I was really after – the RAAW Madonna. Built up as an XL, it’s certainly not a light bike coming in at just over 15kg. It’s not intended to be a light bike, it’s meant to be strong & last a season of racing. So far so good. It satisfies my desire to ride something a little different too – well it was either this or a Pole Machine. This was second hand and whole chunk cheaper (like, half the price!) :) 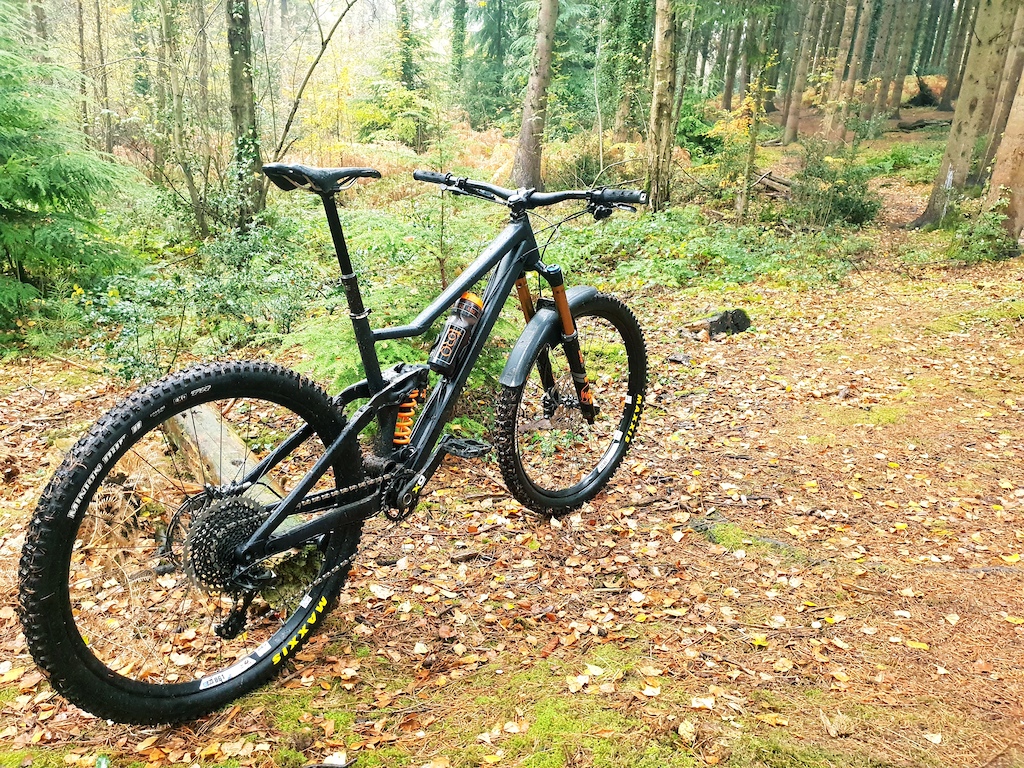