Totally off topic, but what air gun is that on your compressor. I've looked at some of those on Amazon but am worried it will be crap. I need something that I can use without the valve core sometimes. Looks like that would fit the bill.

Interestingly, they are not my go to for road anymore....

who would have thought pearl izumi would be making flannel button down collared shirts? They made Lance Armstrong's US Postal Service race wear!

I wonder how many panels the flannel shirt is constructed from?

That was a really long article about two little dodads that clamp in a trainer - but i read it....Don't know if that says more about me or your writing.

In any case, you need rollers my friend. Way more enjoyable to ride than a trainer. Basic ones don't cost any more than what you got either. I picked up smart rollers and my fitness and pedalling efficiency have never had a better off season. just my 2 cents.

I can understand why a roadie may lust after the cockpit below, even though changing the stem height can involve having to cut housing, new cables and a brake bleed! I do not think the mtb equivalent is nearly so elegant looking. I do think electronic shifting/dropper almost earns its keep for the cleaner cockpit, but at the end of the day batteries have no place on my bikes, so 4 cables it is for me.

What do you all think of Internal routing on a steel hardtail? They used to just drill some holes in the frame and the mechanic would have to find some way to thread everything through. Nowadays there is a stainless steel tube inside the frame that only adds to the weight. Not sure it is a problem I want solved.

I don't think any of my bikes would qualify for min max, but they are 4-5 years old now and considered "out of date."  Instead of looking at new bikes I have taken to swapping parts around to create new "riding experiences." Mulleting one. Over forking another. Trying out different stem lengths. Trying different tires.

At this point I'm happy to ride them all until they break. I never liked the idea of leasing a car and I feel like a lot of people consider the bicycle purchases to be like a lease - they expect to turn it over before it loses it's perceived value or needs any significant labour. This is a philosophy I cannot get behind but many find it makes sense for them. I much prefer the thought you've put into bringing back a riding experience you liked so much and with a bike you have formed a real fondness.

Gravel is definitely worth it! Not as a replacement for mtb but as a different, equally enjoyable experience. They are surprisingly efficient and it's cool to be able to hop onto anything but technical single-track without giving it a thought. Mtb can be pretty adventurous but often it is actually a fairly prescribed experience as you follow along preset trails within a confined area. Gravel is the opposite. You go any and everywhere without limits. If there are two trail systems separated by 10km of rural highway, it would be painful to connect those two trail systems on mtb but that sounds like an ideal Gravel ride!

Don't forget the advent of the gravel bike by copying 1990-2000's mountain bikes!

I think all of my bikes would be called "shore country"? Whether a hardtail or full suspension, they all need to be capable enough to ride a north shore black but make me want to pedal it like an XC bike. I tried a process 134 and it felt sketchy on challenging chunky trails. Pedaled great, cornered great but when things got steep and gnarly, the bike turned out to be a noodle. You'd think I would keep it and take it on less technical rides but it turns out I can't get my head around riding a bike that I can't take in everything. So shore country bikes it is.

Great article. Not sure how long it took to come up with all those different classifications, but every one felt spot on describing a niche of the mtb market.

Tiny beanie is nice, but a cycling cap has a little visor that you can flip down to keep some rain out of your eyes.

Not needed for single track but def nice on road and mountain bikin out of tree cover when it’s coming down.

Hipster bonus points too.  But what if you're rocking the mtb helmet with the visor already?

And cycling cap doesn't cover ears. I use a buff when it's cold works great You just need to get the winter version.

And it's a hard no on the double visor for me. But who really cares in the woods?

Been riding this setup for a year now. Have to say nothing is more fun than a gravel ride broken up by a round of frolf. What's better is when you can talk your wife into both! 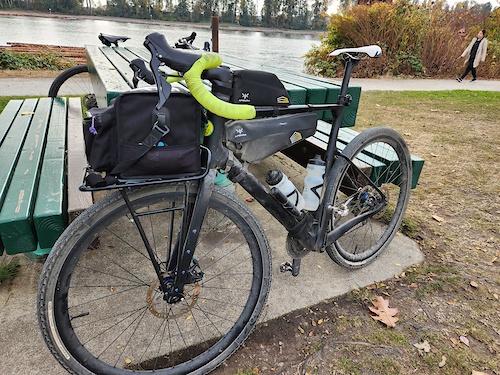 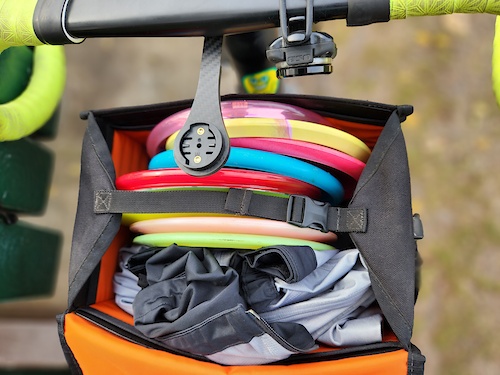 Where is that? Looks fun.

Picture was along the Fraser. We did a loop and ended at the frolf course at queen Elizabeth Park. I'm shocked by how few disc golfers ride a bike to the course. Seems like a natural pairing to me.

For starters castelli makes a mesh that is incredibly creepy when you wear it alone (so dont) but it is the most amazing winter base. It is made of a thick loose mesh that actually keeps your next layer off your skin so the rest of your clothes don't get wet from sweat. If you are having a lot of trouble staying warm, I find road gear much better than mtb for managing moisture, rain and warmth while staying breathable. I use castelli perfetto and ROS stuff all winter and couldn't be happier.

I'd go fleece over merino every day.

Been riding this setup for a year now. Have to say nothing is more fun than a gravel ride broken up by a round of frolf. What's better is when you can talk your wife into both!

I'm still waiting on my Stooge Scrambler frame for my monstercrossgravel build (hopefully shipping this week or next!), but I have the rest of the parts ready to go: 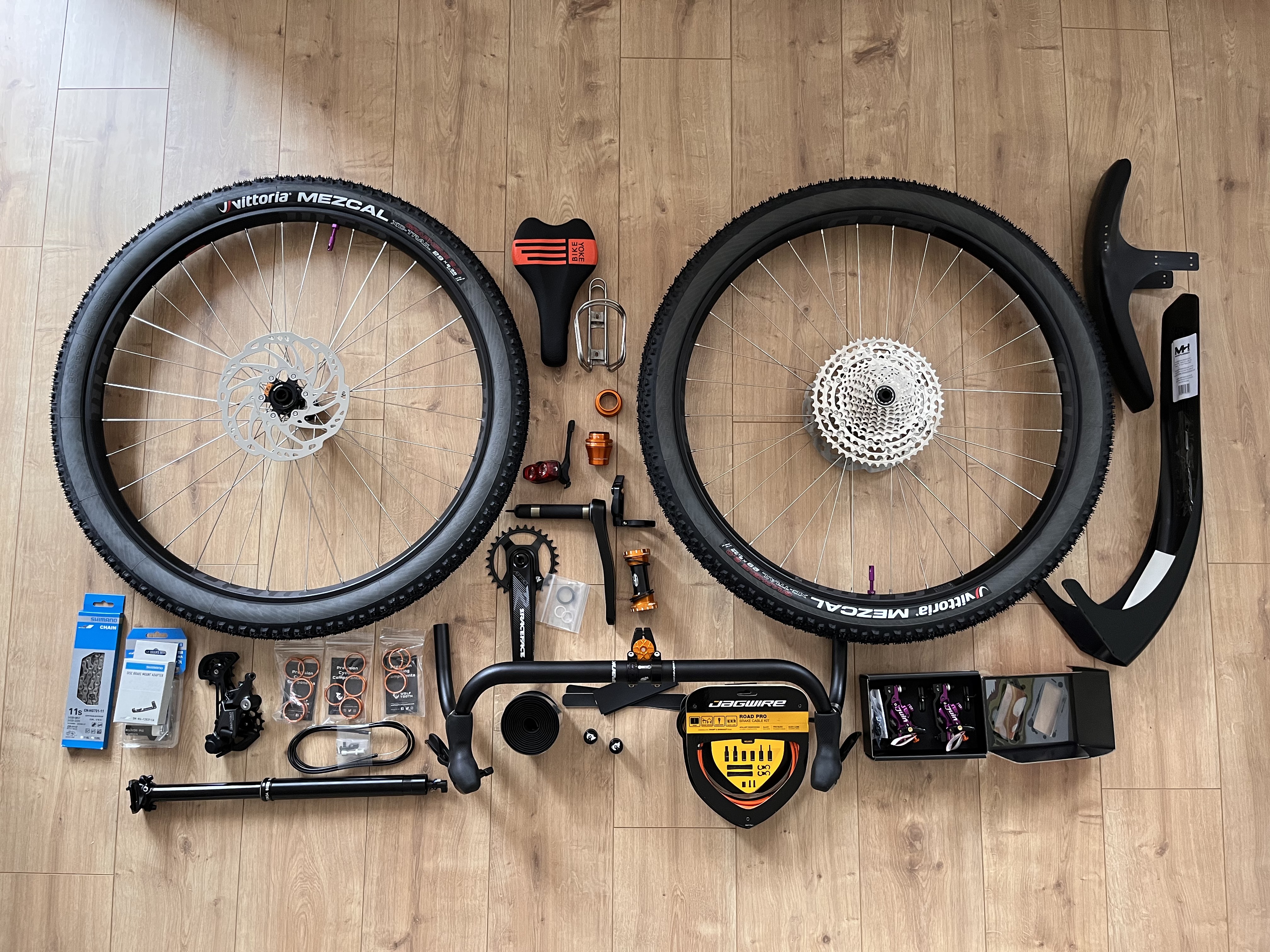 I also found a Czech fellow who built his up very similar to my plans, so it gives me more confidence it'll turn out well. He fit a 29x2.8 Teravail Coronado in the back and said he still had 4mm clearance.

I love those stooge bikes. That is so exciting for you. What kind of brakes are those? Phil's? And is that a riser headset? You will definitely need to post some pics

Rigid is such a game changer climbing over anything with shocks. Agree with lowering the seat. Huge benefit, especially when moving up and over obstacles. Not sure if I look like a dog humping a football? Is this a common analogy? 🤔

Wondering how these super high power, high density batteries do with wet, banging around, being heated in hot sun etc.?

Single speed climbing in my experience does more for your analysis of the climb than it does your power. I never found I got stronger for geared climbing after running ss. In terms of generating the power needed, you just end up standing and using all kinds of parts of yourself to generate the power needed (upper, core and lower). Seated cycling is a specific set of coordinated muscle firing that needs to be practiced specifically ime. Getting out of the saddle and wrenching a high gear up a climb does not really build those muscles nor the appropriate muscle memory.

That being said, once you start climbing ss, you never look at a climb the same. You start to notice small nuances in the trail that will allow you to rest or accelerate. No climb is ever just an all out effort, rather a series of explosive bursts and micro-breaks.

My technical climbing is absolutely garbage this past year.  I'm spinning out, wheelie-ing out, chickening out, crashing out in attempts to do stuff I could previously climb.  I don't think much has changed on my bike.  I'm back on a longer stem which has helped but I don't know what the hell else is going on.  Maybe having an ikon 2.35 on the back isn't the best idea.  And maybe it's the dry and dusty conditions?  My bar is a little higher now but it won't go lower and overall it's super comfortable.  It's definitely a combination of psychology and perhaps my core and upper body strength has declined.  I know hardtails are a bit harder to climb on the more technical, slippery stuff than FS but the stuff I'm having problems with isn't THAT bad.  Perhaps I'm choosing too easy of a gear, not coming in with enough momentum, not being explosive when required.  I don't know...it's just sad.

Guess I just need to keep working on it.  It's one thing to be stuck and not improving but in this particular area I have gotten worse and I can't put a finger on why besides it's likely a combination of several factors.

Thanks for listening.  Ah...feels a little better now.

That sucks, I think everyone can relate to how you are feeling.

The back tire is probably a large contributor.

If I'm mostly spinning out, I drop one or two gears harder. Helps me approach with more speed and if the tire starts to slip you will have a better chance of regaining traction.

Let us know if you can turn it around before the rain comes and we are all spinning out on everything.

I had a xx1 11 speed rear mech that got twisted by a tree branch that snagged the cage. I replaced it with a garbaruk cage of aliexpress. I am pretty sure it's just a knock off but it works perfectly. The pully wheels are much larger and if you ran into difficulty and wanted to run bigger cogs, it would probably do the trick for a very low cost.