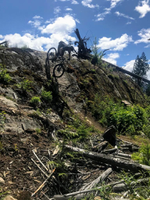 Is the "Hiking Loop" adjacent to Ned's something that is likely to be implemented or just a concept?

Strava warriors don't seem to be the only culprits. There's another popular/powerful route tracker with the ski touring crowd. I've noticed some very fresh North Shore Loam appearing as actual trails on some of their map layers. Its seems that if people record their route and don't specifically have them setup to be private, the route will eventually be mapped out permanently for the world to see. I was able to figure out who recorded a couple of those routes, reached out and suggested they delete those tracks or set them to private.  I think this Tracker is used pretty extensively by SAR and Land Managers, giving them a headstart to sniffing out building.

Theres a notice  at the bottom of the climb trail, by the tennis courts driveway. Looking for a toyota fob

Executioner on fromme is a great tech trail. You can climb D'yer m'ker or drop even further to the Dreamweaver intersection and loop it. I typically ride executioner and loop up Dyer Mker while heading to seventh.